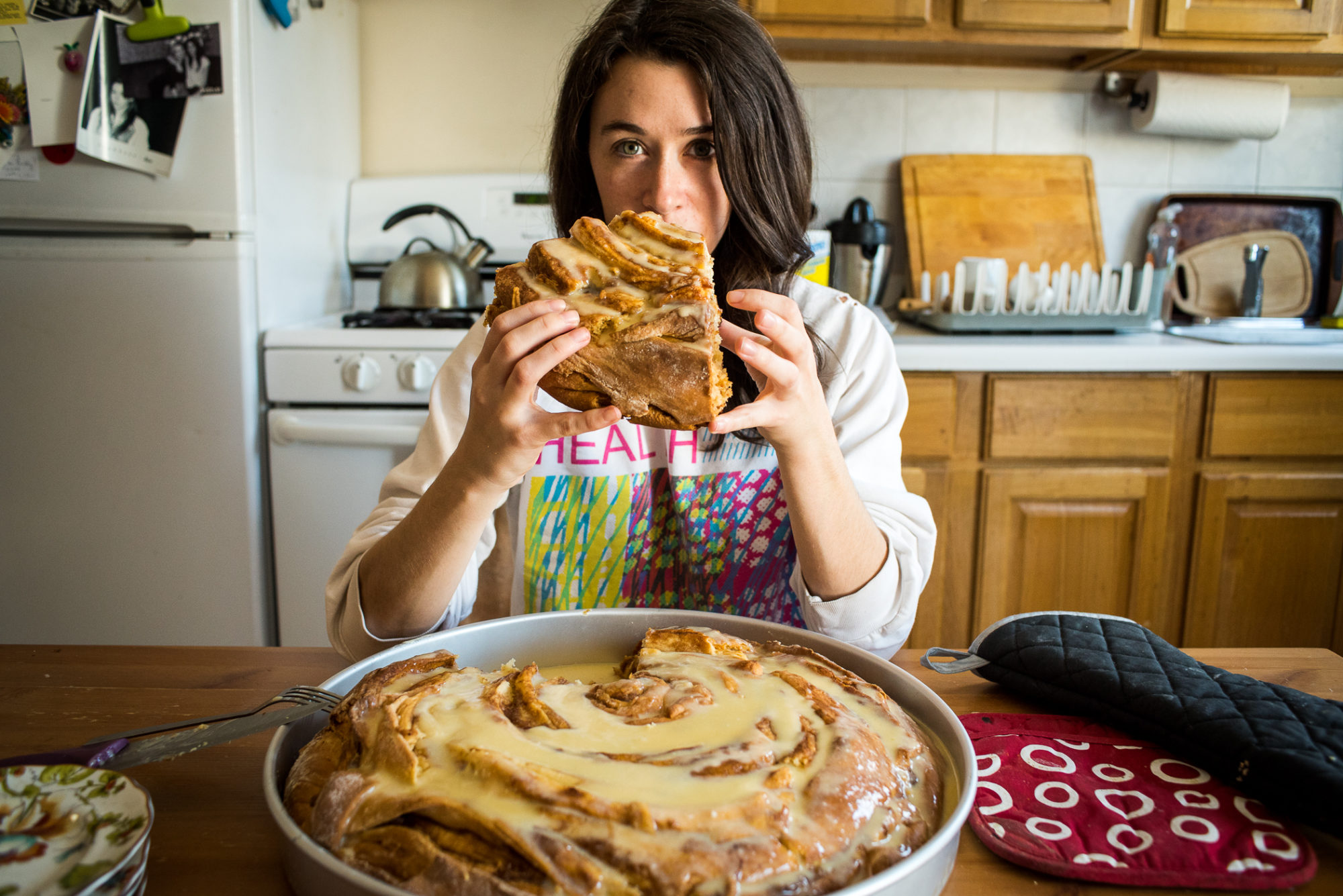 With help from Dominique Ansel and the executive chef at Cinnabon.

Human history, though largely a mess of disappointments, is spotted with achievements. The summiting of Mount Everest. The non-terribleness of the Gilmore Girls revival. The creation of the car cassette tape adapter. I never saw myself as contributing to achievements on that level, but, like your family, you don’t get to pick your fate. Why did I set out to make a the largest cinnamon roll you can make? Well. Because it wasn’t there.

And I wanted a cinnamon roll.

The process, like all processes, began with anxiety about potential failure. Beyond making boxed brownies, grocery store cinnamon rolls that come in a tube, and the occasional birthday cake, I am not much of a pastry chef. To combat this deficiency, I thought it would be best to pick the brains of those who are much of a pastry chef, starting with pastry chef Dominique Ansel of C®onut fame.

I asked Ansel what he thought the most important element to focus on in a large-format cinnamon roll would be, and he said, essentially, the gooeyness. He suggested I combat dryness with a method of twice-baking, once soaking the roll in a custard with a splash of rum, similar to the method Dominique Ansel Kitchen uses for its tasty Cinnamon Spun Roll, which is like a cinnamon roll except made with a yarn-like thread of pastry. This advice sounded very complicated, and I decided to ignore it immediately. Luckily, he had more advice: “You don’t want to risk making something that’s so large that the outside becomes dry and coarse, particularly that outer layer, which tends to be the driest. You could make one large cinnamon roll inside a cake pan, all rolled up with plenty of cinnamon sugar [filling] so that it stays nice and moist throughout.” A good tip, though to be clear I do want to take any and all risks involving cinnamon-roll-related largeness.

Next I spoke with Jennifer Holwill, executive chef at Cinnabon, the cinnamon roll chain best known for helping you make delicious mistakes at the airport. “The biggest challenge is achieving an evenly baked cinnamon roll that is baked just right on the outside while still tender and perfectly baked on the inside,” she says. “To best overcome these challenges, I would form a freestanding roll, meaning don’t bake it in a round cake pan since that will overcook the outside before the center of the roll is finished.” She told me to attempt a really wide but short cinnamon roll to make sure it bakes evenly and to give the roll a stable, collapse-proof structure. “Lastly,” Holwill said, “turn down the oven temperature when baking. Go slow and low at 300 degrees Fahrenheit.”

As for how big she thought I could make it, she told me most home ovens will accommodate an 18-by-13-inch baking sheet. “If you are looking for a round cinnamon roll, 13 inches in diameter is the goal.”

You may have noticed that I received conflicting advice from Ansel and Holwill re: cake pan vs. baking sheet. That’s true, and I commend your reading comprehension skills. After a first, um, botched attempt using a baking sheet that simply was not large enough to fit my ambition (I also didn’t use enough flour and the cinnamon roll just looked like a big melted dough pile), I turned to the website Amazon.com. There I found a compromise: a short cake pan, only two inches deep but 16 inches in diameter, which is just about the largest my oven can accommodate. This, I thought, would give me both the protection of cake pan sides and the wide, flat stability of the baking sheet. After a few attempts using this pan, varying the ingredient levels and methods—resulting in one overcooked dry mess that was more cinnamon rock than roll, ha ha, one that was perfect on the inside but not large enough to properly impress, and another one that was just a big, dumb dough pile that I cut into a heart shape and brought to a party and actually it was fine—I landed on the roll you are seeing before you in all of these very impressive photographs, leaving you stunned, your mouth agape, wondering, How did she do it? and Is she single?

Do I recommend making a very large cinnamon roll instead of many small ones? Ehh. Well. I guess, sure. Maybe for a special occasion.

Kelly Conaboy is a writer who lives in Brooklyn. Her work has appeared in many websites that no longer exist, and some that still do.