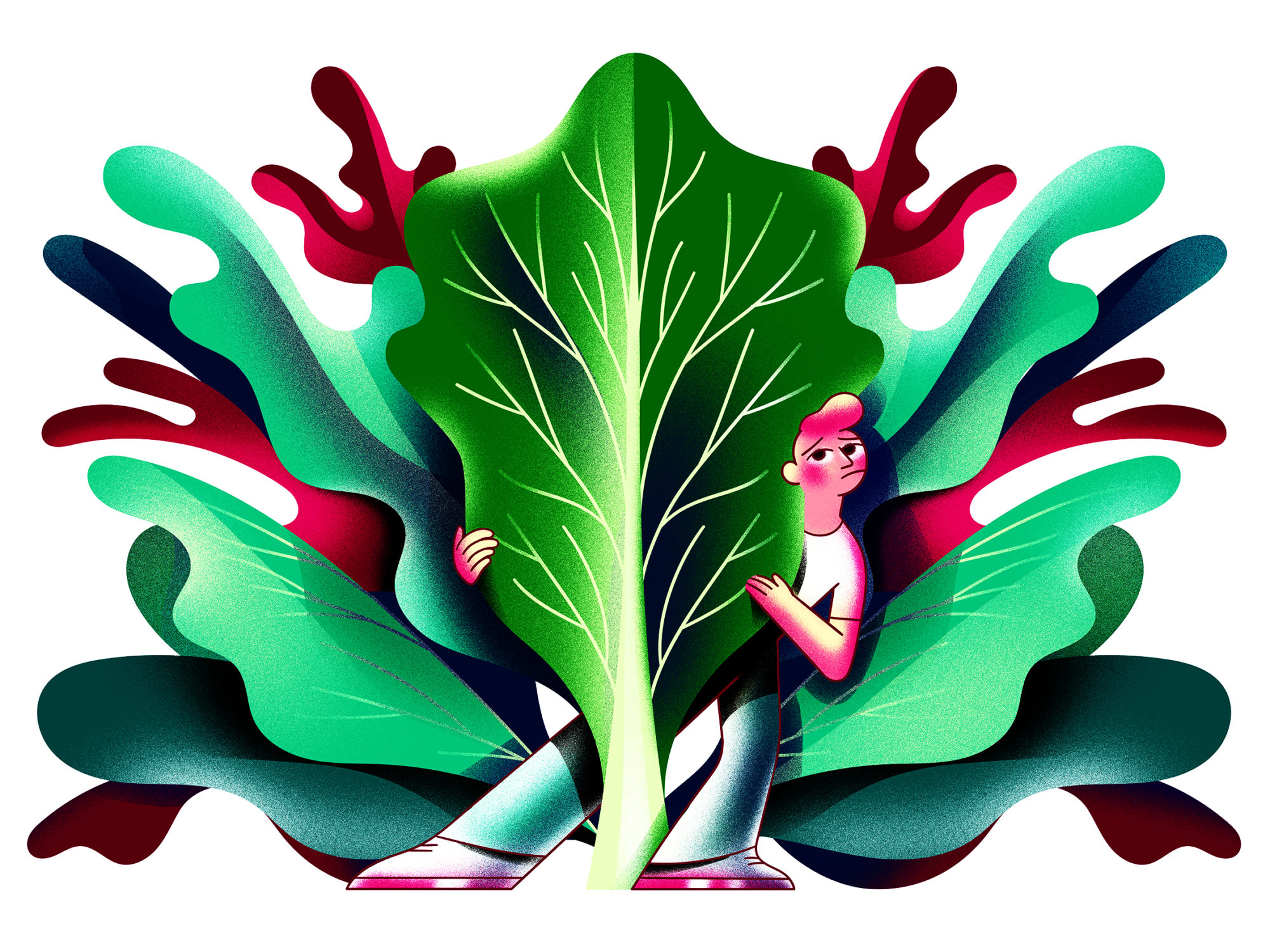 Anecdotal evidence points to a male aversion to bitter greens, but pinpointing the reason behind this is a little bit trickier.

One day, sometime in the 1980s, writer Laurie Colwin sat down for a chat with an English friend of hers, a woman she describes in her book Home Cooking as a “demon cook.” Colwin was primarily a novelist, but she also wrote essays about her culinary fixations. She was currently gripped by one of those highly specific obsessions that seemed to descend upon her every now and again, and this time she was addicted to bitter greens, particularly broccoli rabe. She was eating it at every opportunity that arose—steamed or sautéed, doused with olive oil and dressed with garlic, or sometimes cooked down to a slurry mush in a fragrant bath of chicken broth. Her English friend gave her a piece of advice: “Don’t serve it to men,” she said. “Men don’t like bitter greens.”

Like Colwin’s unnamed British friend, who tried to serve a salad of chicory to “some fellow” who did not appreciate it, I, too, have had bad experiences with a fellow and a bunch of fresh chicory. My husband hates broccoli rabe, mustard greens, endives, and escarole, too. And he’s not the only man in my life who despises them. When I was a child, I remember watching my father devour salads of iceberg lettuce, cut into rigid little crisp squares, covered with bacon bits and lashings of golden Italian dressing from a bottle. He wouldn’t eat the arugula salads my mother prepared, much less a pile of escarole.

Recently, my cousin confessed a problem she’s been having with her partner, Scott. He’s a New Jersey firefighter from an Italian-American family that worships at the altar of eggplant Parmesan. Of all people, I would expect him to embrace the earthy delights of bitter greens. But he dislikes them as well. “It’s so hard to get him to eat anything interesting,” she said as we guzzled cheap wine. “It’s not your fault,” I said with authority. “Men just don’t like bitter greens.”

As soon as the words were out of my mouth, I began to wonder if they were true. They certainly seemed true. And yet I could think of no logical reason that this would be the case—after all, taste buds are taste buds, regardless of what box you check on your census form. Though I tend to treat Colwin’s words as sacred, she has led me astray before (I’m sorry to report that her creamed spinach with jalapeños isn’t great, and her idea for “beef tea” is basically just hot ham water). I’m not usually one to parrot gender-based generalizations that hinge on dubious anecdotal evidence, and yet here I was, repeating one as though it were grade A, certified truth. So I did what any thinking person would do, and I asked a man. “I think you’re asking the wrong question,” said my friend Graham when I quizzed him on his level of affinity for escarole, rapini, and chicory. “The article should be about whether men know what a bitter green is.” I asked another man, one who was bound to be familiar with bitter greens. Dan Nosowitz has written thousands of words on veggies and how to eat them for The Awl, and he happens to enjoy bitter greens. “It seems to me Colwin is talking about a pretty particular subset,” he pointed out. “Bitter greens are a fundamental part of most peasant culinary traditions, because they’re cheap and nutritious and easy to grow, so obviously the theory is, like, factually wrong.”

He added, “The spirit of it, I assume, is that middle-to-upper-class white urbanite men are picky eaters, which is probably true, if becoming less so over the past decade or so.” Mike Wiley, a James Beard Award–winning chef at Eventide Oyster Co. and Hugo (both in Portland, Maine), pointed out that the gendered nature of the culinary world does play a role in who eats what, but not quite in the way I was thinking. “This is a stretch,” he cautioned of the theory. “But I do think it’s more of a thing for guys to be fired up about how much of an animal they can enjoy or pretend to enjoy, like offal and raw pig liver. That spirit of palate-related manifest destiny isn’t there with vegetables.” Overall though, Wiley thought my thesis was “kind of” bunk. He sees “meat and potatoes diners” of both genders and tailors their meals accordingly.

But I wasn’t quite ready to admit defeat. In a poll of TASTE readers, nearly 100 people ranked a series of vegetables on a scale of 1 to 5. According to this small data sample, there is some correlation between gender and preference for bitter greens. Female-identifying respondents gave chicory an average 2.7 out of 5, while male-identifying respondents only gave chicory 2.5.  Across genders, the lowest-ranked vegetable was dandelion greens (fair—they are hard to do right). The largest preference gaps were for arugula (which women like more than men) and rapini (aka broccoli rabe). Women gave rapini 3.4, while men awarded my beloved emerald cruciferous stalks a meager 2.9. Even though in some cases the difference was small, women ranked bitter greens higher than men did across the board.

Admittedly, this was not a wildly scientific poll, and there are people out there who spend their lives studying mouthfeels in a much more rigorous way. But I was curious about whether there could be any possible link between our biological sex and how we perceive taste. While I had a feeling that this preference for greens was about socialization (from a young age, girls are whacked over the head with the idea that they should always be seeking some sort of leafy green vegetable in order to keep our waistlines trim and our hair shiny), I still wanted to make sure that I’d covered all my bases.

Unfortunately for my thesis, John Hayes, an assistant professor in the Penn State department of food science and the director of the Sensory Evolution Center, said that he has “never seen any data to suggest that men like bitter things less than women” and there is “no reason to suspect bitterness perception would differ according to sex or gender.” However, Hayes explained that bitter is a terribly complicated flavor, and that the bitter perception does vary from person to person. Thanks to the high number of bitter receptors we have, which are encoded on 25 different genes, there is a wide variance in the population when it comes to detecting bitter flavors. While some people think saccharine tastes purely sweet, others detect an intense bitter aftertaste (hence why I abhor Sweet and Lo). Furthermore, it’s possible to be a “high responder” to certain kinds of bitterness while being a “low responder” to others. “It’s quite possible that you are very sensitive to the bitter you get from saccharine,” Hayes told me, “but not very sensitive to the bitterness you get from vegetables.”

Fortunately for those of you who dislike bitter greens, Hayes says it is possible to teach yourself to enjoy them. It’s also possible to teach someone else to embrace bitter vegetables—provided you walk softy and carry a big saltcellar. “If I were tasked with preparing really bitter greens for someone I’d put in the meat-and-potatoes pile, I would reach for pork, bacon, and salt,” advises Wiley. “Slowly braise them and add fat and salt to help chill things out a bit.” Jennifer McLagan, author of Bitter: A Taste of the World’s Most Dangerous Flavor, agrees. “Mix it up and balance bitterness with salt or something sweet,” she says. According to Hayes, salt blocks some of the bitterness receptors on our tongue, as does sugar. “Take it step by step,” says McLagan. “And eventually you’ll have them drinking Fernet-Branca straight.”

Katy Kelleher is a writer and editor who lives in Maine. She has written for The Paris Review, The Awl, and The New York Times Magazine.