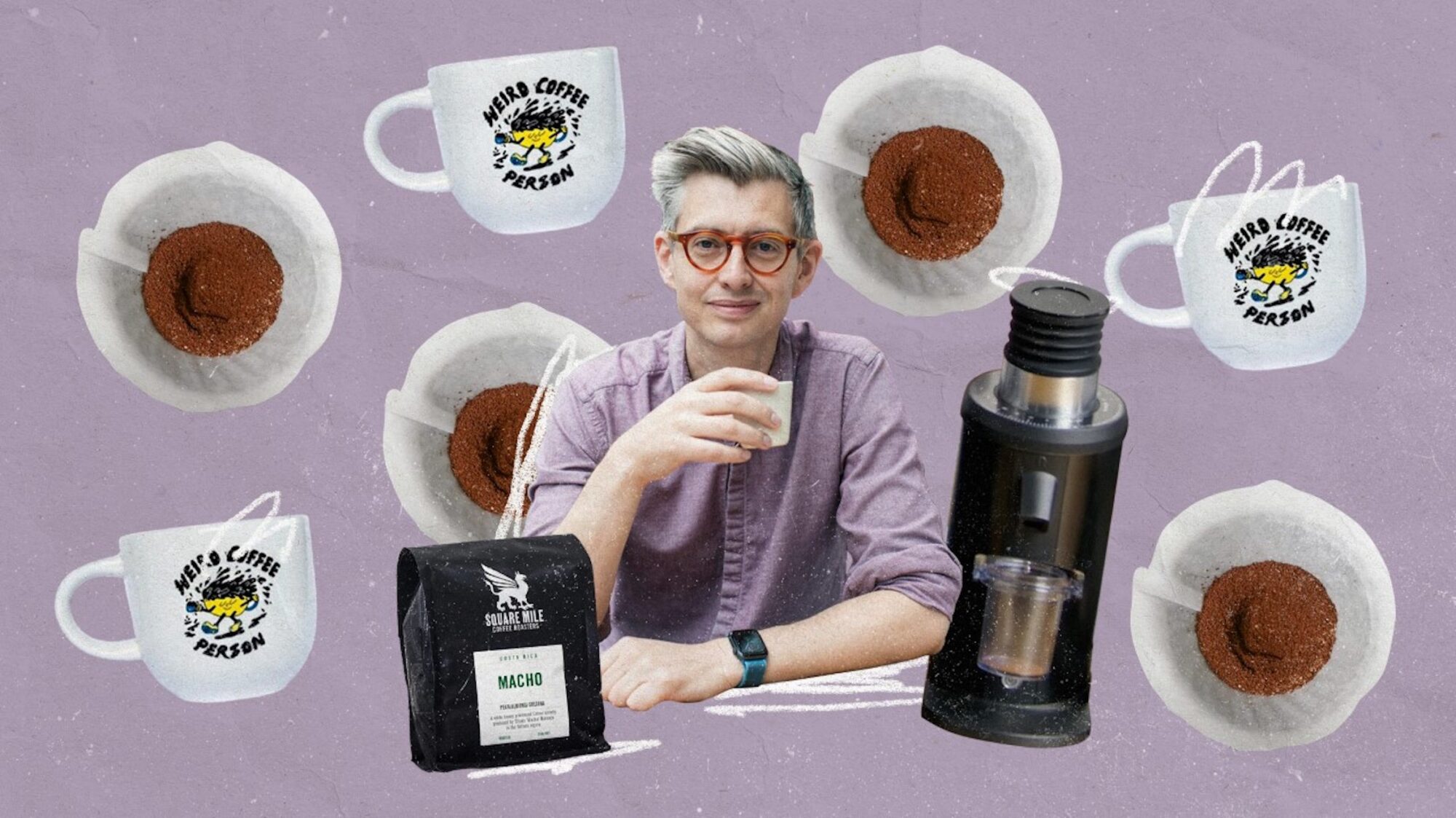 James Hoffmann is juicing vegetables, eating espresso martini cheese, and grinding on half-a-million-dollar machines—all in the name of coffee education.

“We tell coffee’s story in the wrong way,” says James Hoffmann, the 2007 World Barista Champion, author of The World Atlas of Coffee, and, most recently, the host of an incredibly popular and influential YouTube channel discussing all things coffee—with 1.1 million subscribers and growing. “We start with this totally abstract thing: a bush that people have never seen, covered in fruit they’ve never seen, in a country they’ve likely never been to. Then we’re like, ‘Here are ten more steps that coffee goes through that don’t look like coffee.’”

In a $100 billion industry that can take itself a little bit seriously, the Staffordshire-born Hoffmann offers a knowledgeable, sometimes cheeky, and always entertaining approach to coffee that encourages his fans to find joy, and more than just a caffeine boost, in their daily cup. His videos, recorded in a London studio, vary in length and cadence, from deeply informational to silly and irreverent—once he donned a ’70s getup, fake moustache and all, to demonstrate how an in-car coffee brewer from the era is pretty much just a piece of plastic that marginally heats up water.

Hoffmann isn’t unaware of the stereotypes inherent in consuming coffee. A common topic among coffee professionals is how little coffee costs—and yet a common refrain from coffee drinkers is how expensive good coffee can be. But Hoffmann isn’t interested in scolding anybody, and in this conversation, held over Zoom on the very first day of 2022, we talked about cultivating joy, starting with the end consumer. Instead of lecturing coffee drinkers, Hoffmann makes videos about the topics he personally finds interesting. For some, it’s watching him buy and test all the coffee brewing equipment IKEA sells. For others, it’s learning the ultimate V60 brewing technique. And for the strange few (i.e., this author), it’s feeling like you’re right there with Hoffmann as he tries to figure out why in the world Aldi made an espresso martini–flavored cheese.

You have a book, a YouTube channel, and a coffee roasting business; you once had a blog; you give talks . . . When did you realize you were a person who had ideas about coffee that you wanted to share with others?
In October 2004, which is when I started the blog, Jimseven. At that point, I felt extremely isolated in London, in that I didn’t know other people who cared about coffee. I was really interested in learning more, and I was like, “If I can explain it to someone else, I’ll understand it better. Then the internet will probably tell me where I’m wrong.” Writing a blog about the stuff I was learning let me feel like part of a community that was global.

Your YouTube channel was popular before the pandemic, but with people staying home and making coffee on their own, your channel gained a ton of new followers. In April of 2020, you had around 250,000 subscribers. Now you have more than a million. How do you decide what kinds of videos to make?
I have a running document that has something like 150 ideas on it. Ideas go through a vague selection process, and I’ll ask, “What do I want to make? What is interesting to me, and what might interest people widely?” I have the luxury now that I don’t have to look at the 30-day performance window. It’s not just, “What’s going to perform well this week?”

For a long time, YouTube didn’t have a lot of coffee creators, and that’s changing quite a lot now, which is good, because there are loads of videos that I don’t feel like I have to make, because other people can make them. I don’t feel the need to be a completist and make every idea I have.

Does your audience expect a certain type of video from you or for you to cover specific topics?
If they do, they’re not getting it. I have no schedule. I will not post on any specific day. When a video is done, it’s done, and you can have it then. [Laughs.] I will not just make the things that perform well, and I will not make the things that people keep asking me for. If you’ve watched the channel for a while, it’s all over the place.

But, I mean, that’s kind of the point. Coffee is huge, and it’s fun and interesting. I want to find the people who are interested in all the different little pieces. I’m not here to change people’s minds. I’m here to bring enjoyment through coffee. If a person comes to the channel and is a moka pot devotee and watches the video on the moka pot and is like, “Yeah, that was interesting, what else do you have?” and they watch two or three more videos, that’s when your conception of coffee gets challenged. And that’s useful.

If I just did videos on how to brew coffee, if I just did equipment reviews, I would be very sad, and I would’ve stopped. I want to do videos where I juice vegetables to make stock, because we can use things we know about coffee to tell us that increasing the surface area of a thing means we can extract more flavor. My promise is inconsistency and variation, and I deliver every time.

“It is a terrible miracle that the seed of a tropical tree sits inside people’s cupboards and they steep it in water every morning with their breakfast and it’s pennies.”

As someone who focuses on accessibility and making information easier to understand, why has coffee been so difficult for pros to talk about? Why were we so pretentious to start?
If you’ve worked in coffee, you might have this experience of, “Wow, this thing is amazing!” It makes you very excited, and that makes you talk about the thing that is exciting about it to you.

What’s happened is that you’ve gone through a journey. That’s very exciting, but the person you’re talking to hasn’t had the journey, so they don’t have any context for what you’re talking about. If you go all the way down the rabbit hole, if you are excited and passionate about what is right and good and delicious, it’s really hard to have that conversation unless you are full of empathy for the person at the other end. As empathetic as you might be, if you are in that fresh phase of excitement, you just want to tell people, “Hey, milk messes up the flavor of coffee!” Milk and sugar are delicious—but they mess up the flavor of coffee. We don’t have a good support network for easing someone into coffee, because many of us were indoctrinated by someone who’s also passionate and excited.

I don’t think I’m wrong in saying that the end of the rabbit hole is kind of . . . grim. It usually involves lots of sad facts about coffee, like how it’s a product of colonization and that climate change is devastating crops and that we don’t pay enough for coffee. Those aren’t fun to talk about, and bringing up these facts to customers isn’t exactly effective.
It is a terrible miracle that the seed of a tropical tree sits inside people’s cupboards and they steep it in water every morning with their breakfast and it’s pennies—it’s pennies. We as a species built a system that allowed that to happen, and it shouldn’t. And the way that we got it to pennies is by squeezing the people with the least amount of power. That sort of set the expectation that coffee costs pennies.

I feel like the fact that it’s so demonstrably easy to buy coffee for pennies makes the conversation about it being so cheap really hard, because it’s always been this cheap. How can it be wrong if it’s always been this cheap? But it’s the seed of a tropical tree that, like, 30 people have carefully handled for you all the way here. The fact that it’s in your house is magic.

How do you take on the heavier work of encouraging people to value coffee?
I think we’ve asked the end consumers of coffee to care about the wrong thing. We’ve asked them to take on a level of guilt and ethical burden that has actually, I think, made it difficult for them to just take pleasure from coffee. I think my approach in the last few years has been more like, “Hey, coffee’s delicious and fun.” Coffee provides a good return on investment, depending on where you want to invest. If you want a hobby, you can dive deep. If you like tinkering, there’s lots of equipment to learn about. If you just want to drink better coffee, that’s not expensive to do. It’s fun, and it’s interesting, and it’s actually pretty accessible, and you can enjoy yourself. I really feel like all of the ethical hand-wringing should sit squarely on the shoulders of the roasters, who are making the decisions that have an impact.

There are deep, ethical questions within coffee, but I just don’t think we should be burdening the people who we want to drink and enjoy coffee, because to accomplish what we need to accomplish, customers need to spend more money, but they need to want to spend more because it brings them delight and pleasure. The bit that seems to resonate in what I do with people on YouTube is to demonstrate that any passionate person is a little bit ridiculous, and that’s okay. The friction we face is that we’re passionate and serious. Occasionally, it’s okay to step out of coffee to be like, “You know that we’re ridiculous, right?” We’re ridiculous, this is very funny, and that’s okay.