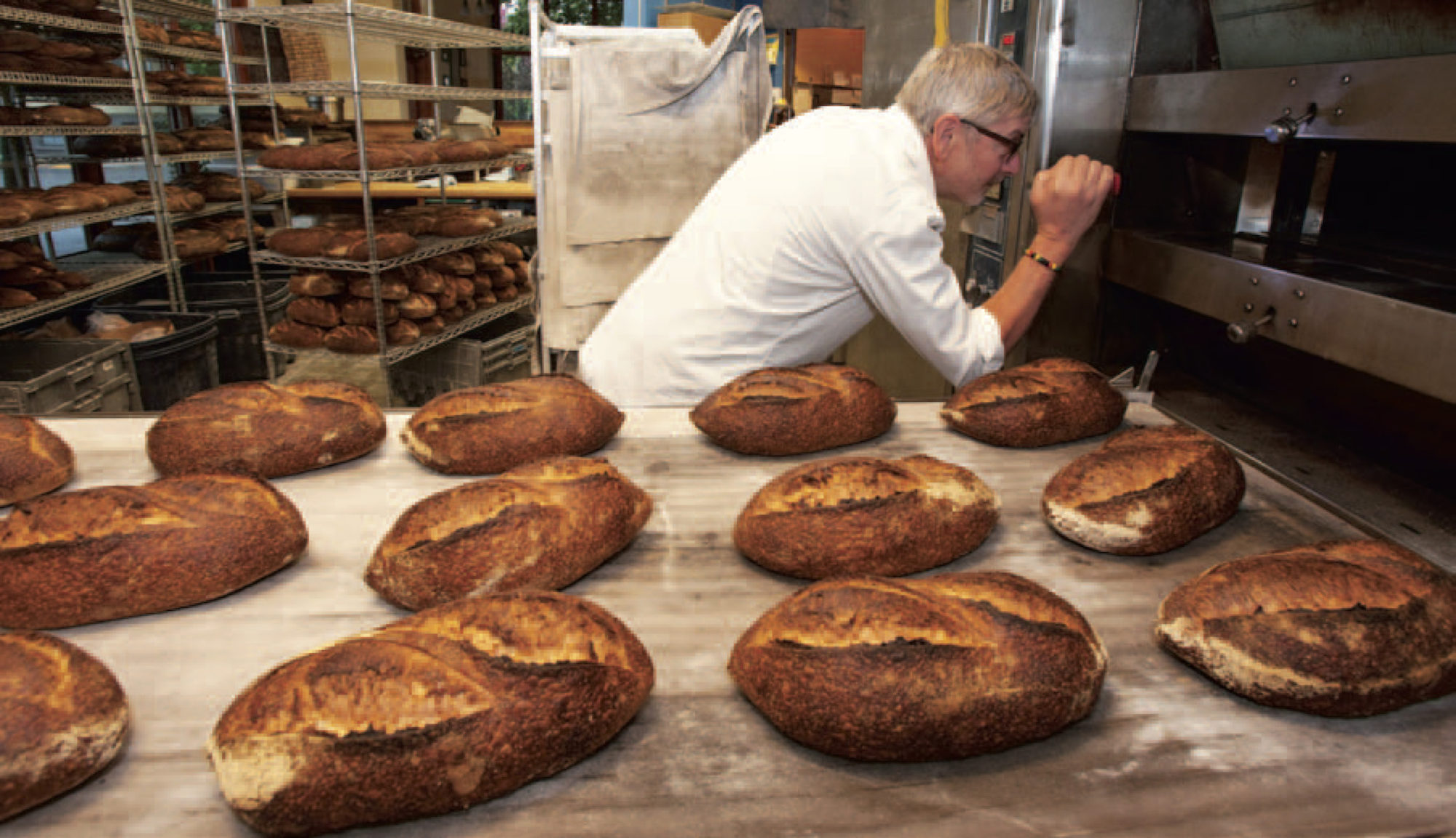 Long before anyone could have anticipated national flour shortages and memes about caring for sourdough starters, Ken Forkish was trying his hardest to get America to bake more bread. When he opened his Portland, Oregon, bakery, Ken’s Artisan Bakery, in 2001, Forkish’s was one of only a handful of bakeries in the city dedicated to baking bread using levain (i.e., sourdough starter). And later, when his influential 2012 book, Flour Water Salt Yeast, was published by Ten Speed Press, it brought this style of baking into many people’s home kitchens for the first time.

In the past two months, a full eight years after the book’s release, it’s spent three weeks on the New York Times best seller list. In the midst of a busy month (both his bakery and his pizza shop have just reopened on a Wednesday–Sunday schedule), we caught up with Forkish over email about everything that’s changed in baking since Flour Water Salt Yeast and its follow-up, The Elements of Pizza, were published.

What have the last few months been like for you? Have you had time to do any of your own home cooking or baking?
I did some baking, and I cooked almost every meal for over two months. I’ve baked overnight breads and the Saturday Bread. I kept my levain from Trifecta [a bakery of Forkish’s that closed in late 2019] going in my home fridge, restoring it infrequently, but I built it up again and fed bits of it to my Saturday Bread. I also had at home a big bag of Camas Country Mill sifted wheat flour, and I used that; what was amazing was the hydration of the dough made with 100 percent Camas flour. It’s so absorbent, at nearly 100 percent water, and the baking quality is really satisfying. That’s almost equal amount water to flour by weight. Crazy. When I made this recipe with Shepherd’s Grain, 80 percent hydration was about the max the dough could take before getting too slack and floppy.

I made a lot of pizza, too, using The Elements of Pizza recipes. The biga recipe is probably my favorite right now. More people should buy this book and read its levain section (and learn about pizza!). I updated the levain process from Flour Water Salt Yeast to be more efficient.

It’s crazy to think that your first book, Flour Water Salt Yeast, was published eight years ago. A lot has changed since then in the way that we think about bread-baking at home. How hard was it to convince people to bake bread at home when the book first came out?
There has been a pretty solid community of dedicated home bakers for a long time. But with the pandemic, more and more people wanted to bake at home, for a lot of reasons. Many have realized a new craft that was easy to learn and had obvious rewards in day-to-day life. It’s been cool seeing so many people following my method and recipes.

You write in the introduction to the book about having to sort of warm Portland up to the idea of artisan bread when your bakery first opened, and even hand out fliers about why the bread’s exterior was so dark in color. Have America’s bread-buying habits changed since then?
Artisan bread from Pearl Bakery and Grand Central Bakery had already been influential in Portland for several years before I opened, but my baking style was much different. I aimed for a more rustic, darker-baked, crusty country loaf. We were, and are, also very dedicated to the baguette and croissants, and other French pastries, like canelés. It’s hard to put words into play on this question, and our city has changed a lot since then. But yes, now when I look around the net on Instagram, I see a lot of bakers pulling bread out of their ovens baked to the same dark chestnut color I bake my country loaves and my ciabatta to. My breads don’t look quite as distinctive as perhaps they once did, as this style has become more out there. One thing that has evolved is that I feel closer to getting what I want (flavor-wise and texture) from the character of the levain itself, and I think that comes from 20 years of experience, in two bakeries (Ken’s Artisan and the now-closed Trifecta).

In the last few months especially, people seem to really be embracing creating their own sourdough starters, experimenting with different types of flour, and baking their own loaves. But are there certain things that a bakery will always do better on account of scale or equipment?
Someone messaged me today to ask if I could publish a recipe for the ciabatta we make at my bakery, and it’s not the same in a home kitchen. That bread needs a good-quality spiral dough mixer, and our 15,000-pound deck oven with steam is a key ingredient, too. Same for baguettes: For all the requests that I produce a baguette recipe for home, I have no interest because the failure point is too easy to reach: the size and shape of the home oven, the steam problem, shaping, scoring, loading it in properly. I don’t want to figure this out! Sorry! To make a great classic baguette, you need a really good commercial deck oven with steam.

What about flour? In many parts of the country, the all-purpose flours and the bread flours have been disappearing from grocery store shelves. Are there more interesting flours that people should be seeking out for their bread and pizza? Any mills or vendors that you particularly like?
I am lucky to get deliveries directly from Camas Country Mill. But they do ship off their website. I have no idea of their supply, though. If we are all lucky, more mills will open, like Camas, that have farmer relationships to get the best-quality wheat in the fields, and then stone-mill the wheat into the flour I’m using now at Ken’s Artisan Bakery. Bluebird Grain Farms in Washington is a great source for very high-quality flour, too. It’s not cheap, but it’s not always cheap to grow either.

One of the biggest obstacles I think of when it comes to baking bread and pizza at home is oven temperature. Any tips for people at home (like me) who are working with sort of small, terrible, unevenly heated ovens?
The one advantage of the Dutch-oven baking for bread is that you put an oven within an oven. It’ll even out the issue a bit with a small, terrible, unevenly heated oven. Maybe. You can compensate for uneven heating in your oven by turning the Dutch oven several times, or at least once, during the bake.

Do you have a go-to pizza topping combo that you’ve been excited about lately?
I’m a classical guy. My go-to is a cheese pizza. If the crust is great, the sauce and cheese are of good quality, it’s a well-stretched dough, baked perfectly, and they’re nice to you?! That gets me more excited than deciding it’s cool to put any fascinating topping combos on your pie. Cookbook publishers, though, I get the sense they want more perfect ensemble pizzas!

Okay, I’ll give you one, because I did it at home several times during lockdown: I was picking up farm-share boxes from Your Kitchen Garden in Canby, Oregon. The box contents were, heh heh, abundant! Anyway, I got tired of all the chewing and grabbed all the tender greens one night—arugula, miner’s lettuce, more things that I’m sure have names—and made a pesto in my Cuisinart with all the greens, olive oil, garlic, anchovy, black pepper, lemon juice, and walnuts. Then I baked a cheese pizza and put dollops of the pesto on top. That was delicious, and a nice fresh counterpoint to the pizza. I’ll do that again. Walnut Levain Bread
The crunch of walnuts plays off the nuttiness of this hearty levain loaf.

Pain Au Bacon
Forkish suggests a slice of this bacon-studded bread slathered with roasted pears, or even turned into a sandwich with peanut butter and bananas.

Prosciutto and Bufala Pizza
This pizza makes the most of the fresh milky taste of buffalo mozzarella.

Meatball Pizza
Put a few meatballs on the pizza, save a few for your spaghetti tomorrow.

Last week, we talked tacos and Animal Crossing with Danny Trejo, and caught up with the actor about his new cookbook, Trejo’s Tacos.

For even more tacos, and a whole summer’s worth of recipes for grilled fish, spicy salsas, and delicate desserts, check out My Mexico City Kitchen by Gabriela Camara.

Penguin Random House has brought together some greatest hits from authors like Alison Roman, Christina Tosi, Samin Nosrat, Ina Garten, and more in Family Meal. The digital cookbook is going for $5.99, and all proceeds go to the Restaurant Workers’ COVID-19 Emergency Relief Fund.

In another digital cookbook, Cooking from Your Pantry, chef Nancy Silverton has a whole slew of recipes that bring together everyday ingredients into thoughtful 30-minute meals.

A cheese plate can change your life, or so argues Marissa Mullen in her fun “cheese by numbers” book, That Cheese Plate Will Change Your Life.