Get a free recipe
Subscribe
What Does It Mean to Eat a Flower?
By: Katy Kelleher Photos: Eric Helgas 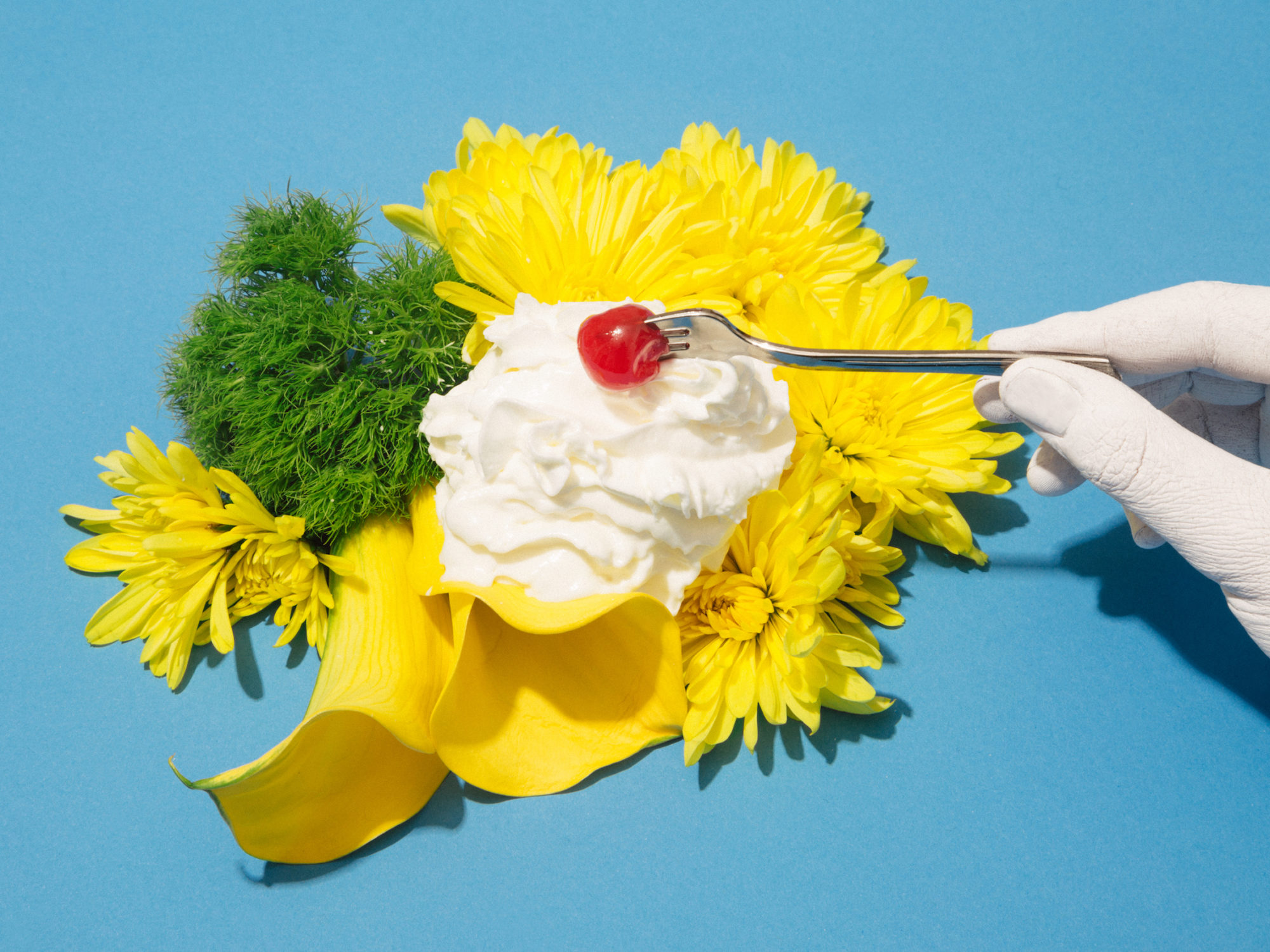 Flowers have as much flavor and nutritional value as a lot of things that we put in salads. So why do we think of them as such a symbol of vanity and superficiality?

On the cover of The Moon Juice Cookbook, a book by the enigmatic wellness fairy Amanda Chantal Bacon, a single spoonful of yogurt floats in midair while an invisible hand delivers, in the style of Salt Bae, a sprinkling of powder that cascades onto the semi-viscid surface. There, at the center of it all, sit four curling rose petals. As you turn the pages and peruse the recipes, flowers appear, again and again and again. There are drooping ranunculus posed with vials of mushroom powder, and marigolds scattered across a sheet of crackers.

I’ve seen this scene pop up in my social media feeds, too: smoothies strewn with pansies and orchids, salads plated with chive blossoms, grain bowls dotted with violets. I worry sometimes that all these pretty blossoms are going uneaten, like so many wilted parsley curls and sad bunches of ornamental kale, the decorative touches of yesteryear.

This might all seem like superficial adornment, born of a culture of excess and performance, but people have been eating flowers for as long as we’ve been eating plants of any kind. Like all edible plants, they provide some sustenance, but historically, the reasons for eating flowers often had more to do with cultural needs than bodily ones.

We see a few fresh pansies strewn across a salad, and it’s hard to see anything other than a decoration.

Flowers could be used to add status to a dish (Marcus Gavius Apicius’s 1st-century cookbook includes a surprisingly sophisticated recipe for fried frog’s legs with a fennel flower garnish). Flowers had medicinal uses (rose petals for vitamin C, honeysuckle to soothe the throat) and religious ones (the Egyptians considered the lotus the sacred flower of the Nile and ate it raw, boiled, baked into bread, and dipped in honey). Each culture had its own system of beliefs surrounding  plants, but nearly all early agricultural societies grew flowers, and nearly all of them ascribed some symbolic meaning to them.

Despite this long and storied history, and despite the fact that they are, nutritionally, not that different from lots of herbs we eat regularly, flowers tend to occupy a space in our imaginations that we associate with vanity and hedonistic desires. We see a few fresh pansies strewn across a salad, and it’s hard to see anything other than a decoration. When I ate my first flower, I was entirely unaware of the subtext that had been attached to the act. I have a vivid memory of standing on our suburban Massachusetts lawn, my six-year-old feet digging into the grass, and placing a single purple violet on my tongue like a communion wafer—before transferring it to my molars and biting down. I only later realized it was edible, and I remain thankful that my test drive of the practice didn’t involve a toxic daffodil or foxglove.

Since then I’ve learned which easily found flowers taste fantastic and which blooms are best avoided. In the summer, I eat the flowers from my garden, snacking on chive blossoms and basil flowers while I weed. Walks in the woods yield even more wild bounty. You can eat wood sorrel’s lemon-yellow (and lemony-tasting) flowers, along with its heart-shaped leaves. You can eat bee balm’s purple herbal spikes and chickweed’s tiny crisp white blooms. Then there’s chicory, clover, tansy, Johnny-jump-ups, purslane, wild roses, and daylilies—not to mention dozens of others.

I have a friend who forages in the woods of New England for a living, and in the summer she likes to make large “wild” salad bowls for lunch, packed with every native green sprig she can find—dressed with olive oil and lemon juice. She eats the whole dandelion, flowers and all. For her, like many foragers throughout history, it’s less aesthetic choice and more pragmatic survival skill.

But for most people, like me, eating flowers is a way of savoring their beauty—literally. Flowers are mild in flavor and nutritional value, yet they’re high in emotional resonance. A 2005 study conducted by researchers Jeannette Haviland-Jones and Terry McGuire found that when participants were presented with flowers, they always, in every case, responded with a Duchenne smile (aka a “true smile” that involves the mouth, cheeks, and eyes). When presented with other sorts of gifts, some people smiled, and others didn’t. But flowers? Flowers made people happy. Flowers have certain traits that are universally pleasing—they’re colorful, they smell nice, and they tend to have some type of symmetry. They are designed to appeal to pollinators like bees and other insects, and they appeal to us, too. But despite the many practical reasons to eat flowers (nutritional, environmental, medicinal), we tend to greet flower-eating with a mild sense of judgment—as if people who eat flowers are somehow cheating their way to happiness, just as they might by taking drugs or buying a $12 Moon Juice.

In literature, flower-eating is used to tip the reader off to characters’ faults—their excessive sexuality, their hedonistic pursuit of happiness, or their superficiality. In Homer’s Odyssey, the continually wayward Odysseus gets blown into an island inhabited by lotus-eaters. When his men partake in the local custom (it is only polite, after all), they fall into a blissful forgetfulness and have to be forced back to work.

In Alfred Lord Tennyson’s poem The Lotus-eaters, he rewrites this encounter in his own 19th-century verse, calling the natives “mild-eyed” and “melancholy” as they bear branches “laden with flower and fruit” that made the sailors forsake their homes and descend into a particularly apathetic form of madness. As a result of these stories, the phrase “lotus-eater” has become a euphemism for doing drugs.

In the case of the famous 20th-century Japanese story “The Flower Eating Crone,” eating flowers has an illicit impulsiveness to it. “It was a bizarre, disturbing sight: somehow the flower being crammed into her mouth was like a living creature,” the narrator describes, appalled and yet ever so slightly enticed by the rude gesture.

We’re not supposed to value beauty above all else, especially not in such a practical realm as the kitchen. Yet we so often consume things that have little nutritional value (like herbs or spices) without giving it a second thought.

In D.H. Lawrence’s Sons and Lovers, a sexually thwarted young man grabs a flower aggressively and slowly eats it until he has “a mouthful of petals.” Katherine Mansfield’s short story “Carnation” begins with two marvelous sentences that could stand on their own and still tell a rich tale: “Eve—curious Eve—always carried a flower. She snuffed it and snuffed it, twirled it against her fingers, laid it against her cheek, held it to her lips, tickled Katie’s neck with it, and ended, finally, by pulling it to pieces and eating it, petal by petal.”

Perhaps that’s why I have kept quiet about my impulse to dismember daylilies, to stick my tongue into azaleas, to nibble at the papery-fine edges of a Rosa rugosa—it reveals that I am a person who can’t be satisfied by coolly appreciating beauty from a safe distance. And maybe that’s why flower-eating still feels somehow transgressive. We’re not supposed to value beauty above all else, especially not in such a practical realm as the kitchen. Yet we so often consume things that have little nutritional value (like herbs or spices) without giving it a second thought.

Flowers, those fragile, pretty things, provide a jolt of visual flavor, much like how a dusting of nutmeg adds a certain subtle scent to a creamy casserole. Whether we eat them with our eyes or consume them with our mouths, flowers can enhance the culinary experience, and what kind of puritan would deny themselves such a simple, sweet pleasure?

Katy Kelleher is a writer and editor who lives in Maine. She has written for The Paris Review, The Awl, and The New York Times Magazine.