Get a free recipe
Subscribe
Mastering Meringue, One Peak at a Time
By: Anna Hezel Illustration: Nick Hensley 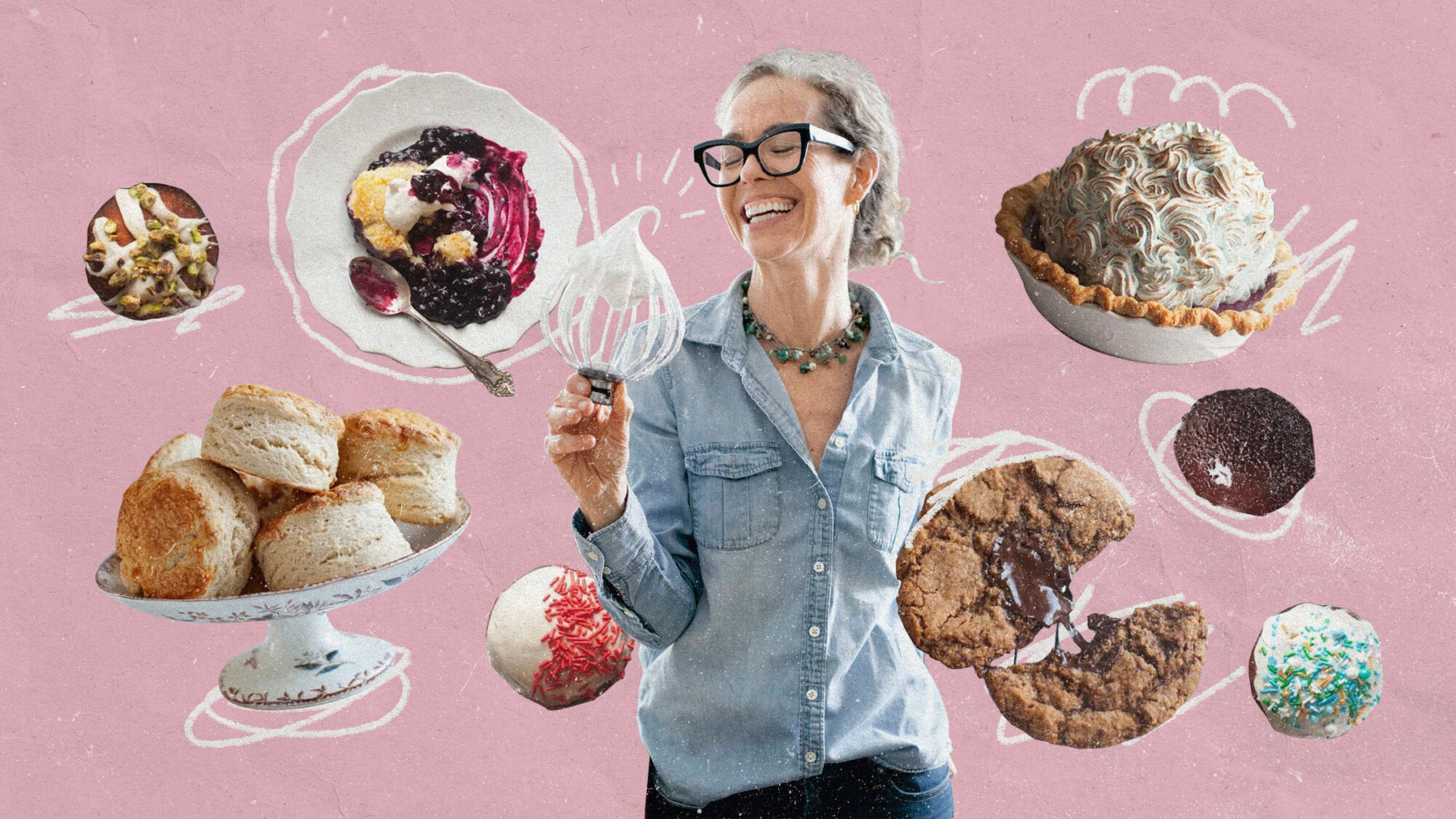 Few people can speak as enthusiastically about toasting Swiss meringue, piping icing onto perfectly rectangular loaf cakes, or exploring Minnesota’s rich baking culture as Zoë François. Over the course of the past year, while working on her new book, Zoë Bakes Cakes, and a new television series, Zoë Bakes, François has spent a whole lot of time doing all these things.

“It’s been a big year,” she tells me. “It’s funny because, on one hand, nothing happened because I’ve been quarantined. I haven’t been out in the world much. But so much has happened in this house.”

The book tells the story of how she went from being an art student in Vermont to being a pastry chef at a variety of restaurants in Minneapolis, and it translates this career into a baking bible for the modern home cook. If you’ve ever aspired to cover a cake with mile-high willows of honey-scented meringue, or to construct a crunchy volcano-like pavlova full of whipped cream and fresh berries, this book will show you the way, with detailed illustration, patient instruction, and a good sense of humor.

I’ve followed your work for a few years, but reading this book was the first time I learned that you grew up on a commune in Vermont. What are some of your food memories from that experience and that time? Do you have any memories of how communal cooking and eating worked?
I would have to say that most of my memories from that time were about food or being chased around by farm animals. We grew all of our own food. It was a mile-long dirt road, impossible by car, to get to the commune, so we had to bring in all the food that we bought outside, and it was hard work to do it. So we grew all our own food or canned it. My dad kept bees, so we had honey. I think making, growing, and eating food was an enormous part of the day.

And my dad was the gardener. It was a commune, so everybody was doing it, but that was really his thing. My aunt lived there, too, and she and a couple other women were the bakers, so she made homemade bread and granola, and then they would sell them at the local co-op, which my dad helped start, and also at fairs. And making butter was probably my first memory of being involved with the process of cooking, because I was very, very young, but everyone would take turns with the butter churner.

Now, in the 21st century, there’s a lot of romanticization of self-sufficiency and farming and raising chickens. What do you think of that as someone who actually grew up living that reality?
I think it’s hilarious, because it was really hard. There is this romanticization. There’s also all of this new technology and new ways of doing things that probably make it easier now than when my dad bought this land in the Northeast Kingdom of Vermont. And all of these ex–New Yorkers settled there not knowing anything about farming or living off the land. And it was terrible, honestly. It was both beautiful and amazing, and we were creating all of this. The community was really creating all of this incredible stuff. But it was really hard!

The first year we lived there, there were no structures on the land, and so we were living in tents. My dad and my mom had a tepee, and then they separated, and they had separate tepees, and I would go between the two tepees. But it was Vermont. Have you ever been to Vermont in the winter? Living in a tepee is not really what you want to do in the winter in Vermont. And I remember that we carried glass jugs of water up from a well to the main house. That’s how we got our water. There was no running water in the building. There was no electricity. It was hard. It was like Little House on the Prairie. My dad had braids down to his waist.

Another very Vermont experience you had—you talk about decorating cakes at Ben & Jerry’s in college. What are a couple of trade secrets you learned that actually kind of came in handy as you started to become a pastry chef and work more with cakes?
I would say how to hold a pastry bag. Because you have to create pressure in the bag in order to get whatever you’re piping out of it—twisting the bag so you always have some tight pressure in there. So that was one of the skills: the pressure and release of a pastry bag. Still, it’s the first lesson I always give people when they’re learning to pipe out of a bag, because it’s what creates the movement of a bag. So that’s probably the lesson I learned most from that. And also just that I loved working with my hands like that. That I could create something. I was an art student at UVM at the time, but I hadn’t really found my medium. In that moment at Ben & Jerry’s, I probably didn’t say, “This is my art form,” because it hadn’t developed into that yet. But it really was! That really was the moment that I discovered that this was an art form—even though I wasn’t really creating art at the time. But it was my medium.

Speaking of your medium, one of the things I love about the book and about following you on Instagram is how passionate you are about meringue—as a technique, an ingredient, a structural element sometimes. What do you particularly love about working with meringue?
I think part of it is the transformation from these egg whites and sugar, which, separate, you can’t imagine that it’s going to create this sort of ethereal fun texture. There are so many things you can do with it. One of the things I really love about it is its whimsy—the sort of spiky, whimsical, cloudlike shapes that you can get with it. But then there’s the different textures you can achieve with it, and you can toast it. You can bring out the blowtorch; you can light it on fire with a flambé or something. It’s fun. I think people are intimidated by it because it seems very technique-based.

I’ve definitely experimented with meringue a lot, but even when I follow all of the instructions and separate the eggs pretty well, every once in a while, I just have a batch that won’t inflate. Is that inevitable every once in a while?
There are some definite rules to it. With baking, there are some things that you can’t skirt. With meringue, for instance, it’s making sure that the bowl that you’re whipping it in, or the attachment, if you’re using a stand mixer—that no butter, no oil, no yolk has been anywhere near it. Because any fat whatsoever will prevent the proteins from binding and taking on air and inflating. So, yeah, I have been in a situation in a catering company, where I’m making meringue out of 120 egg whites, and they are just sloshing around in the bottom of the bowl, and they will not foam at all. And it’s because there must have been some kind of butter or something. And it’s just heartbreaking! And there’s no willing that to be different.

It’s hard to tell exactly how old your eggs are, but as eggs age, the proteins get weaker, so when an egg is really fresh, it has a really strong protein in the egg white, and they whip up better. So if you know you have fresh eggs, you have that tiny little advantage.

For people who are maybe trying meringue out for the first time, is there a recipe from the book that you think can be a good starting point?
Okay, the ultimate is the pavlova. So, there are different kinds of meringue. A French meringue is just raw egg whites and sugar, and you add those things together in a certain way, and they make this glossy, beautiful meringue, which you have to bake, because it has raw eggs. And that’s the premise of my pavlova. So that’s sort of the ultimate transformation of the egg whites and sugar together into this sort of ballerina-tutu pavlova. But you can also bake it on a sheet and turn it into a roulade. And that one’s maybe a little less finicky and a nice entry point.

There’s Swiss meringue, where you cook the egg whites and the sugar together over a double boiler into a syrup until all of the sugar grains are dissolved. And you whip that up and add tons of butter, and you have a Swiss buttercream. Or you can not add the butter, and you can just pile that on top of a cake and spike it up and torch it with a blowtorch. There are so many different ways you can play with meringue from the book.

And then there’s Italian meringue, where you cook sugar and water together until it’s a certain temperature with a candy thermometer and then add that to whipping egg whites. I would say, if someone’s just starting out with meringue, that’s maybe the progression. The French meringue and the Swiss meringue are different but maybe equally simple. And then the Italian meringue, because you’re getting into working with a candy thermometer and pouring hot syrup into whipping eggs, maybe that’s something to do after you feel comfortable with the other two.

Your TV show just debuted at the beginning of February. What can we expect from the first season?
The pilot was shot in the spring, and it’s rhubarb. Here in Minnesota, rhubarb is everything. Because we live through these crazy winters, and then finally something is coming out of the earth. So most Minnesotans live for rhubarb season. But then we visited beekeepers. This whole city was built on flour milling. So we visited a local flour mill that’s milling small-batch flours based on single-source grains.

Church basements are a huge part of this culture in Minnesota, so there’s lots of incredible baking that’s happening in those areas that are traditional recipes going way, way back. Mostly Scandinavian. We visited professional bakers, home bakers, apple orchards, pumpkin growers. We really got around to some of the people who are baking and making and creating the food scene in Minneapolis and Minnesota. Olive Oil Chiffon Cake
This might be the lightest olive oil cake you ever bake.

Pavlova
With an outside shell made from French meringue and a filling of whipped cream and lemon curd, this pavlova is a perfect entry point for a first-time meringue baker.

Looking to bring a Parisian sensibility to more of your meals? Check out Rebekah Peppler’s À Table.

It’s Always Freezer Season, by Ashley Christensen and Kaitlyn Goalen, will teach you how to use your freezer like a chef.

Revisit some of your favorite New York restaurants through John Donohue’s illustrated tribute, All the Restaurants in New York.