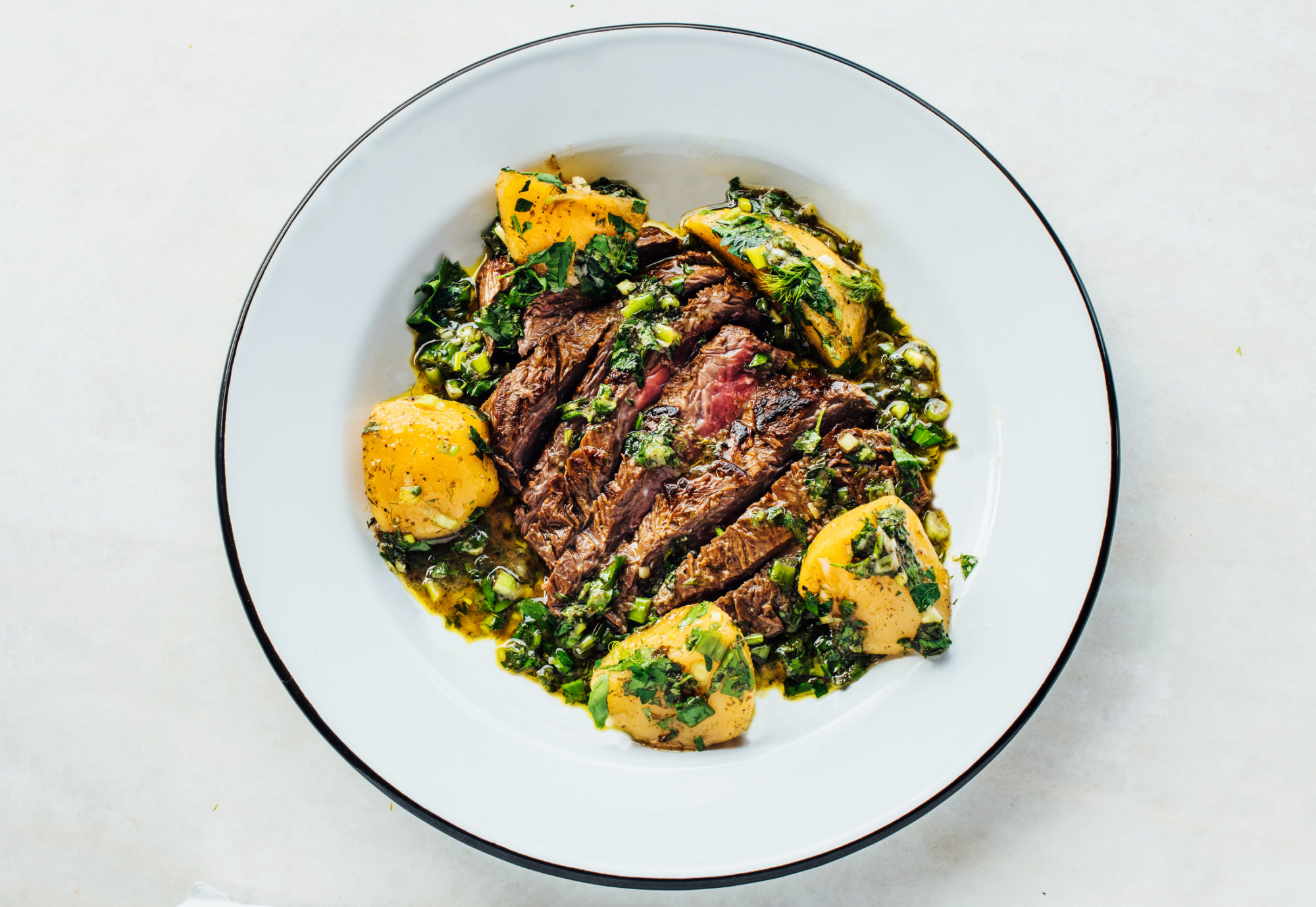 Meat bought with the best intentions can be, well, boring. Marinades fix that, sometimes in a hurry.

Some of the most common recipes you will find floating around the corners of the cooking Internet are for meat marinades. Why? Simple. Many cuts of meat—be they beef, poultry, lamb, pork, venison—are too tough or, dare we say, boring to serve simply seared and seasoned. Marinade is what brings meat to life. Its invention was a monumental feat in culinary history, like the first motion picture with sound (that would be The Jazz Singer in 1927). Do we know when meat was first marinated? No way. But we can answer a few more questions related to this often misunderstood cooking technique. Well, first, what’s a marinade?
A marinade is a moist mixture of salt, acid, and fat—combined with flavoring agents like herbs and spices used to coat, rest, and cook meat with the express goal of tenderizing the texture and enhancing the flavor. Some examples include teriyaki, Jamaican jerk, and Korean bulgogi.

And how does this differ from a brine or dry rub?
Marinades differ from brines or dry rubs, the later being dry (an easy distinction) and the former meaning that the meat is completely submerged in an acid-free, salt-rich liquid, usually with the goal of curing for preservation. A further distinction is that marinated meat is cooked in the marinade, whereas brined meat is separated from the liquid before cooking. So should I marinate my meat?
From a practical perspective, marinating is a form of seasoning done in advance, and seasoning meat in advance is one of the best and easiest ways to improve the outcome of your cooking. From a scientific perspective, the salt and acid are doing all of the work (on a cellular level), with the rest of the ingredients (e.g. garlic, chile, fennel seed, citrus zest, rosemary) hanging out there for topical flavor. The choice of whether to simply season in advance (a few pinches of kosher salt) or fully marinate with salt and acid comes down to the type of meat you’re cooking.

The salt in a marinade effectively cures the meat (draws the moisture out), making it more difficult to overcook, which you’d be hard-pressed to find an argument against. The acid component is a little trickier; it coagulates the proteins, partially cooking the meat in advance, which tenderizes it. As for the fat, many of the chemicals that make up the flavors of herbs and spices are fat soluble (not water soluble), so the fat allows the marinade to absorb, distribute, and imbue the full flavor of the ingredients. The fat also partially mutes the acid and salt, effectively mellowing their effect. And how long should I marinate for?
The type of meat, the tenderness of the cut, and its thickness will help you to decide how long to marinate it for. Generally speaking, the tougher and bigger the cut, the longer it will take. A whole chicken, for instance, should be marinated for at least 12 hours and will continue to improve in marinade for up to three days. The flavor of pork lends itself to curing (think prosciutto or salami), but an acid like vinegar or citrus juice can give it a mealy texture over time (specifically avoid pineapple, as it tends to break the protein down significantly), so it is best marinated for less than 24 hours.

When salted too long, beef can assume a tacky texture and distinctly noticeably cured flavor (think corned beef). So it is best marinated for less than 24 hours, with thinner cuts such as skirt steak achieving noticeable benefit in as little as two to four hours. Which is why you will see shirt or flank marinades in almost every recipe or cookbook positioned as “fast” or “easy.” OK, the major question here. What makes the best marinade?
A good balance of fat, acid, and salt is key. Too much acid and the meat can taste pickled, too much salt and, well, it’s too salty. Too much fat and the other ingredients won’t have the proper concentration to work their magic. Aim for a basic ratio of 3 parts fat to 1 part acid, with 2% of the overall weight (meat + marinade) being salt, which comes out to about a tablespoon per pound for Diamond Crystal Kosher salt and a little less for others.

The specific fat, salt, and acid you choose depends on the ultimate flavor you’re looking to create. Olive oil is wonderful if you’re working with Mediterranean, Middle Eastern, or North African ingredients, whereas it can clash with flavors from the Far East and South America, leaving a bitter aftertaste. We prefer vegetable or raw sesame oil when marinating with Asian flavors (especially when soy sauce is involved), and peanut or pumpkin seed oil when working with South and Central American flavors, especially when lime juice is the main source of acid. Following the rule of thumb “If it grows together, it goes together” should keep you out of trouble.