Get a free recipe
Subscribe
How Do You Make Neapolitan-Style Pizza at Home?
By: Matt Rodbard & Daniel Holzman Photos: Denny Culbert 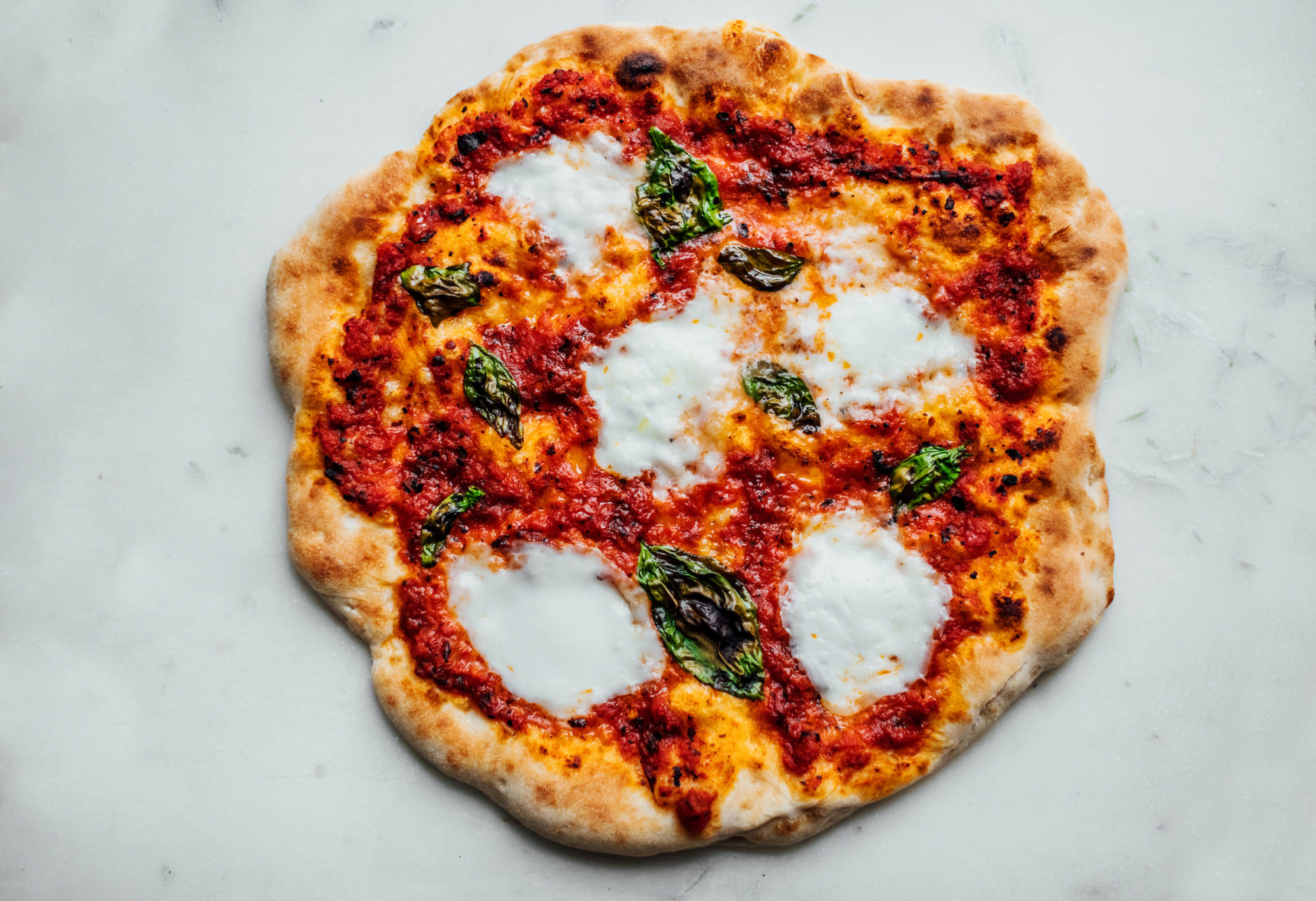 Without the extreme heat of a wood-fired grill, there’s a trick to getting that prized leoparding. Yes, you want leoparding.

Ask any New Yorker and they’ll tell you the rules of pizza. How to properly eat a slice? Fold it in half and dodge the falling pepperoni oil. Which toppings are allowed? Plain (sometimes simply called “a slice”) or pepperoni is preferred, and sausage, peppers, eggplant, mushroom, and onions are all acceptable, but don’t ask for pineapple. New York City is proud of its pizza. After all, pizza by the slice was invented there when Gennaro Lombardi came up with the idea to serve his pies piecemeal at Lombardi’s, the first pizzeria planted in American soil, opening on Spring Street in 1905. It still bakes pies out of the original coal oven.

Lombardi’s pizza was adapted from the pies of Naples, Italy, where modern-day pizza was invented in the late 18th century when tomato and cheese was added to the focaccia flat breads. After Lombardi’s revelation to cut the pies, the popularity of pizza exploded and people all over the world began adapting the concept to work with their local ingredients. It’s not often that an original stands the test of time, but despite crisscrossing the globe in a tornado of cultural assimilation, the original Neapolitan pie is still revered. There’s nothing particularly unique about a Neapolitan pizza; the individual ingredients are all high quality, but it’s not only the sum of the parts that makes it special. It’s the exacting cooking technique that elevates the pie and allows it to maintain its position of excellence. It’s cooked in 90 seconds in a 900-degree wood-fired stone oven, so the crust chars before it dries out, leaving a simultaneously chewy and crispy texture akin to Indian naan bread. The sauce and cheese have just enough time to boil and melt together, leaving a rich acidic blend comparable to the best cream of tomato soups. It’s pizza nirvana, and what all pizza should be. (Sorry Chicago, New York, the pizza kitchens of the Golden State.)

Most pizza iterations have sought to simplify the process (gas bread ovens, conveyor belts at places like Domino’s), but a Neopolitan pizza requires profound concentration to perfect. It’s so special that there is a government-sanctioned organization in Italy—Associazione Vera Pizza Napoletana—with the legal right to train pizzaiolos and give pizzerias special designation as legitimate. But unless you invest in a wood-fired stone oven (bulky and costing several thousand dollars to build), making the pizza at home won’t get you in the Vera Pizza club.

That said, you can definitely make a really good pie, akin to Neapolitan, if you’re patient and you set your mind to following the steps. Other than the oven, for which Daniel has a solid workaround, the rest of the process is mostly the same as it is in the original pizzerias of Naples. The dough is started the night before by kneading ultra-finely ground high-protein flour with water and yeast (we add a little olive oil to help it crisp). The dough is wet, and the fermentation happens slowly while refrigerated overnight, allowing time for the mix to sour and giving the dough its classic elasticity.

In the morning, portions are cut, formed, and refrigerated until they’re ready to be warmed, risen, stretched, and cooked. The true Neapolitan pizza is cooked at 900 degrees for a flash, and the sauce, which is made from crushed canned tomatoes, cooks atop the pie in the extreme heat. For the home oven, we cook the sauce beforehand. Arguably the hardest part of the process is learning to properly stretch the dough. Unlike most pizzas, which are built in a pan or on the peel and slow-cooked in a deck oven, a Neapolitan pie is built on the table, then pulled onto the peel. The act stretches the precariously thin bottom to its breaking point, while wet tomato sauce undermines its structural reliability from the top.

From the time you stretch the dough, there’s a fleeting 60-second window to sauce, top with fresh mozzarella, olive oil, and basil and transfer to the peel. Any more time and the sauce leaks through—sticking the dough to the peel, preventing it from sliding into the oven without folding on itself, spilling over and wrecking the cooking surface in a burnt mess. To cook it evenly, the pizzaiolo constantly rotates her creation, throwing a handful of wood chips to coax the fire and finally lifting the pie into the flames to broil the top and finish the crust with its telltale leopard dappling of charred perfection.

There’s no way to get a home oven hot enough to cook a pizza in 90 seconds and properly char the crust, so Daniel has a trick to hack the temperature issue. First of all, he cooks the pizza on a piece of steel rather than stone. The steel transfers heat more efficiently, speeding the cooking process. Equally as important, he cooks the pizza under the broiler, which allows cheese to melt in time and the crust to get its proper char. Happy pizza-making!