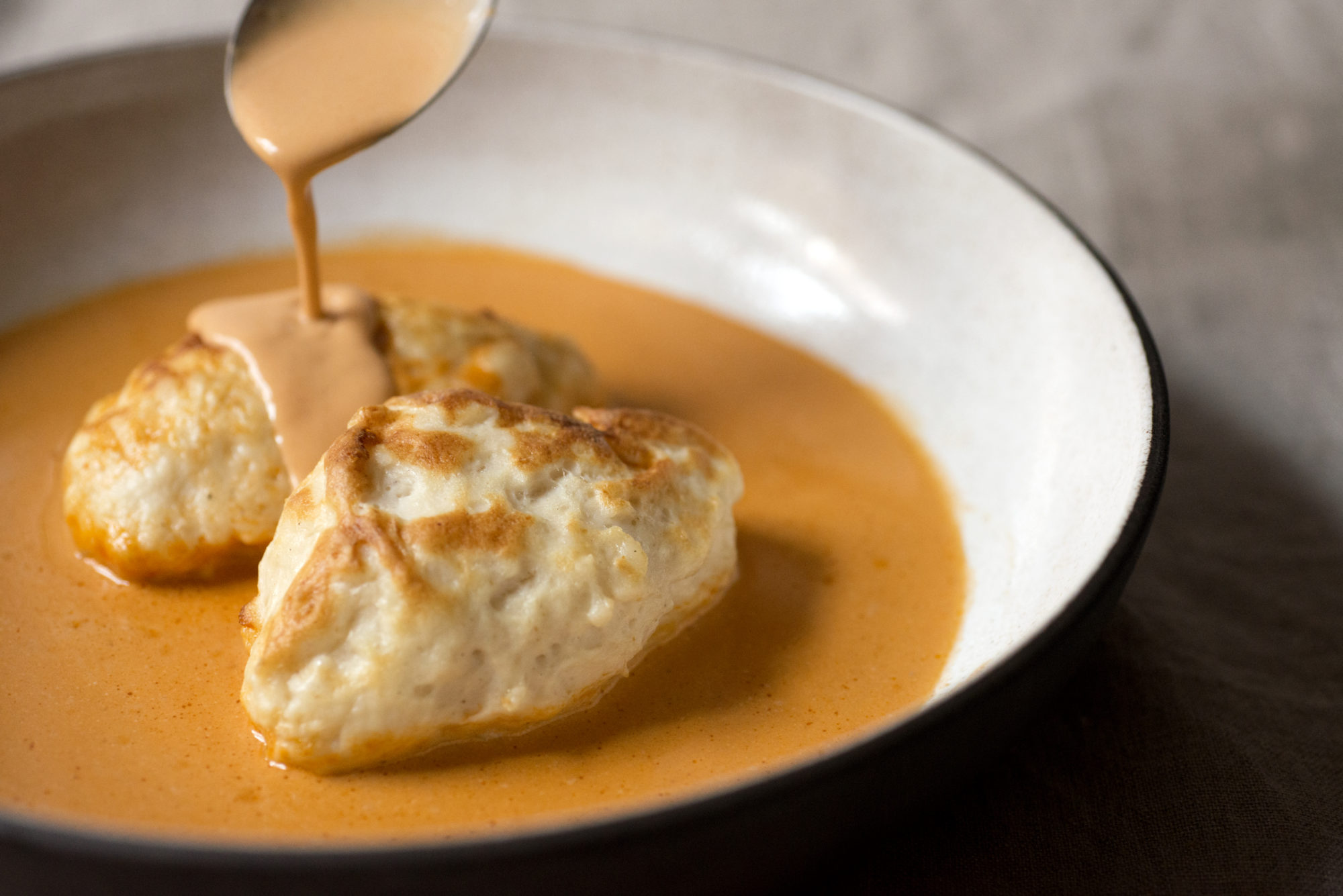 The French have a fine tradition of shaping pike mousseline into the size of a Nerf football and dropping them into a pool of very rich sauce. God bless the French.

The cats of Col du Truges congregated on the kitchen’s windowsill. There were a dozen or so, sitting steadfastly but patiently, as if they were waiting for a table at the bistro. These mousers must have been drawn to the restaurant’s tradition of French country fare, much like myself and the surrounding locals, who frequently lunch at the auberge, or inn.

The province of Beaujolais sits on the Saône river, just north of Lyon—the birthplace of the nouvelle cuisine that France is known for around the world. Beaujolais has adopted many of Lyon’s dishes into its traditions, such as coq au vin, which calls for a rooster to be braised for hours in a claret red wine with onions, mushrooms, and lardons, rendering the tougher poultry moist and supple. But it was a feted fish soufflé that caught my attention: a quenelle de brochet, an egg-shaped island of pike mousseline floating in a lake of sauce Nantua, a crayfish-laced béchamel fortified with fish stock.

Sitting some 500 meters high on a hill in Villié-Morgon, Col du Truges looks out over Côte de Brouilly, one of the ten crus (vineyards) of Beaujolais, a region best known for making juicy red wine from Gamay grapes. The area’s wines were historically—and unjustly—overlooked due to their superlative northern neighbor, Burgundy, but that’s changed in the past decade as winemakers like Marcel Lapierre, Jean Foillard, and Guy Breton have dispelled the idea of Beaujolais as a light, uncomplicated wine. And I would argue that the food of Beaujolais should be reassessed as well. The quenelle’s size seems almost absurd at first— its equator is nearly the that of its longitude—but its mass is cloud-like and its flavor hints at the subtle balance between fish and cream. This is a natural pairing, as is the relationship between pike and crayfish, lake and river; one’s existence feeds into the other, symbiotically at a distance, yet exclusively coupled.

At Col du Truges, Jean-Jacques Soudeil, the restaurant’s mustachioed chef, sources his quenelles from Pascal Bonhomme of Lyon’s Café-Restaurant du Soleil just as one would get charcuterie from a charcutier. Quenelles, after all, are laborious to make. A forcemeat is crafted by pressing finely chopped fish through a tamis, or sieve; at one time, the process entailed pounding the fish into a paste with a mortar and pestle, but now it’s much easier, thanks to the advent of the food processor. The mixture is blended with egg whites and cream (though some quenelle masters start with a panade, a mixture of butter, flour, and egg, like pâte à choux, to bind it together) and then poached in water to set their ovoid curve. The quenelles are baked, often one per ovular casserole dish, in a coral-pink cream sauce until they’re bubbling. The finished quenelles are light and fluffy, as all good soufflés should be; they’re a more buoyant version of spongy gefilte fish, and less chewy than Chinese fish balls. When I returned to New York, a bastion of classic French cooking since the 1940s, I was surprised to find my metropolis largely devoid of quenelles. It had been this way for a long time: Following the 2004 closure of La Caravalle, an extolled French institution, only La Grenouille and Alain Ducasse’s Benoit continue to serve quenelles. Even Daniel Boulud, a Lyon native who assembled hundreds of quenelles as a young cook, puts them on his restaurant Daniel’s tasting menu only occasionally.

But in 2016, quenelle aficionados found new hope in the form of Daniel Rose, an American chef who had made his name at his Paris restaurant, Spring, and had returned to the U.S. to open Le Coucou, a modern tribute to decadent French cooking in lower Manhattan. Rose’s quenelles swim in sauce Américaine, which is similar to sauce Nantua but swaps out the usual crayfish for lobster. The dish has its origins in Rose’s student days at the Institut Paul Bocuse Lyon, where he saw a teacher make quenelles for himself at dinner. Rose made a point to remember the simple, unpretentious recipe; their presence on Le Coucou’s menu represents his effort to change the American diner’s perception of aristocratic French food.

When I decided to attempt making quenelles at home, I sought out Rose’s advice. He recommended grinding up the fish until it’s gummy and forgoing the superfluous panade. My biggest obstacle in re-creating the dish was getting ahold of freshwater pike while the Great Lakes were frozen over; unlike Rose, I don’t have my own stockpile. So I substituted sole, finding its skeletal structure much easier to work with than the pike’s pesky Y-bones. Whirring fish in a food processor isn’t so romantic, but that only adds to the delicate high-low balance of a quenelle, the tale of an overabundant lake fish forever linked to an affluent sauce. I asked Rose, “How do you make a such an enormous quenelle?” “Use a bigger spoon,” he told me; no matter the size, it’s still eaten with ordinary silverware.