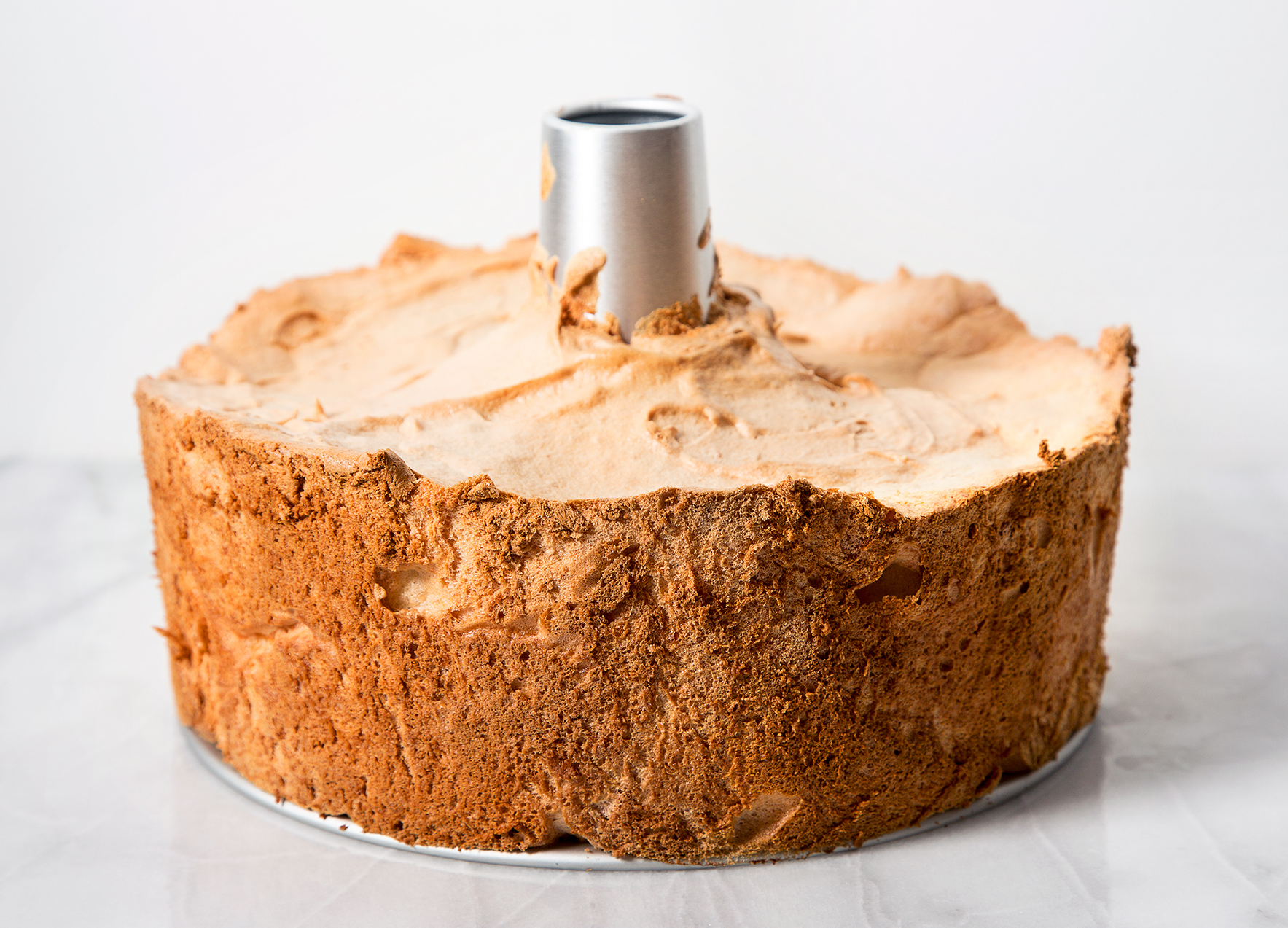 The traditional method for making angel food cake is a pain in the ass. But there’s a better way.

Angel food cake could never be the food legitimate angels eat, because in heaven you can eat steak and chocolate and very expensive cheese. The angels who feed on this cake are the kind that show up in Thomas Kinkade paintings or sing backup for Corey Feldman.

Angel food cake screams of sacrifice and deprivation, even though its name contains the word “cake.” It contains no fat—the nutritional bogeyman of the ’90s. It was the only treat served at your grandmother’s house during her brief flirtation with Weight Watchers. The only way anyone could eat steamed chicken with a side of seven green beans every evening was to focus on the dessert to come: a preportioned slice of cellophane-wrapped cake with the texture of a mildewed sponge and the flavor of vanilla-scented Febreze. This is not what was promised in the photographs, which showed a fluffy tower of golden-brown bliss, with a lily-white interior so soft and delectable you wanted to jump into the picture and jump up and down on it like a bed at the Four Seasons.

Angel food cake sits in the supermarket bakery section in a flimsy plastic dome, giving Pinterest-loving ladies all over the world revelations of the cake’s potential as a blank canvas. At any given family cookout you could come face to face with a store-bought cake that’s been transformed into a diorama of marshmallow Peeps having a day at the swimming pool, and you are going to have to spend months talking about how clever it was because that sort of validation is the only thing getting your Aunt Patty through her divorce. Thanks to Sandra Lee and an infamous moment in television history, we have a country of unhinged women filling their cake holes with canned pie filling, spackling their exteriors with canned frosting, impaling them with tapered candles.

Most of the angel food cakes you encounter in the wild are store-bought or made from a mix, because there’s an erroneous belief that making a good one is hard. Since they require their own specific shape of pan, once you buy one, you’re committing for life to chasing the perfect recipe. You do not want that pan sitting in your cabinet of failure, mocking you for thinking you could possibly make an angel food cake that was not only worth eating but also worth making a second time.

The traditional method for making angel food cake can be persnickety and difficult. It requires beating egg whites to a consistency that recipe writers assume you’ll be able to recognize when you get there, but you won’t, because egg foaming is not a part of your daily life, and you will instead spend at least three minutes asking, “Does this look right?” to no one in particular. And then, of course, there’s the “gentle folding”—a balancing act of breaking up flour lumps without deflating the egg whites.

But there’s a better way! This angel food cake spits in the face of any case made against it. It is easy; it is simple; it is glorious. There’s no fussing with egg temperatures or foam-peak analysis, no slow streams of sugar or folding skills required. It could very well end up being your new favorite cake. Though angel food cake was once corrupted by suburban ladies, we can wrestle it back from them in the same way we saved high-waisted jeans, La Croix, and swingers parties.