Get a free recipe
Subscribe
A Life Without Fish Stew
By: Mayukh Sen Illustrations: Vance Lump 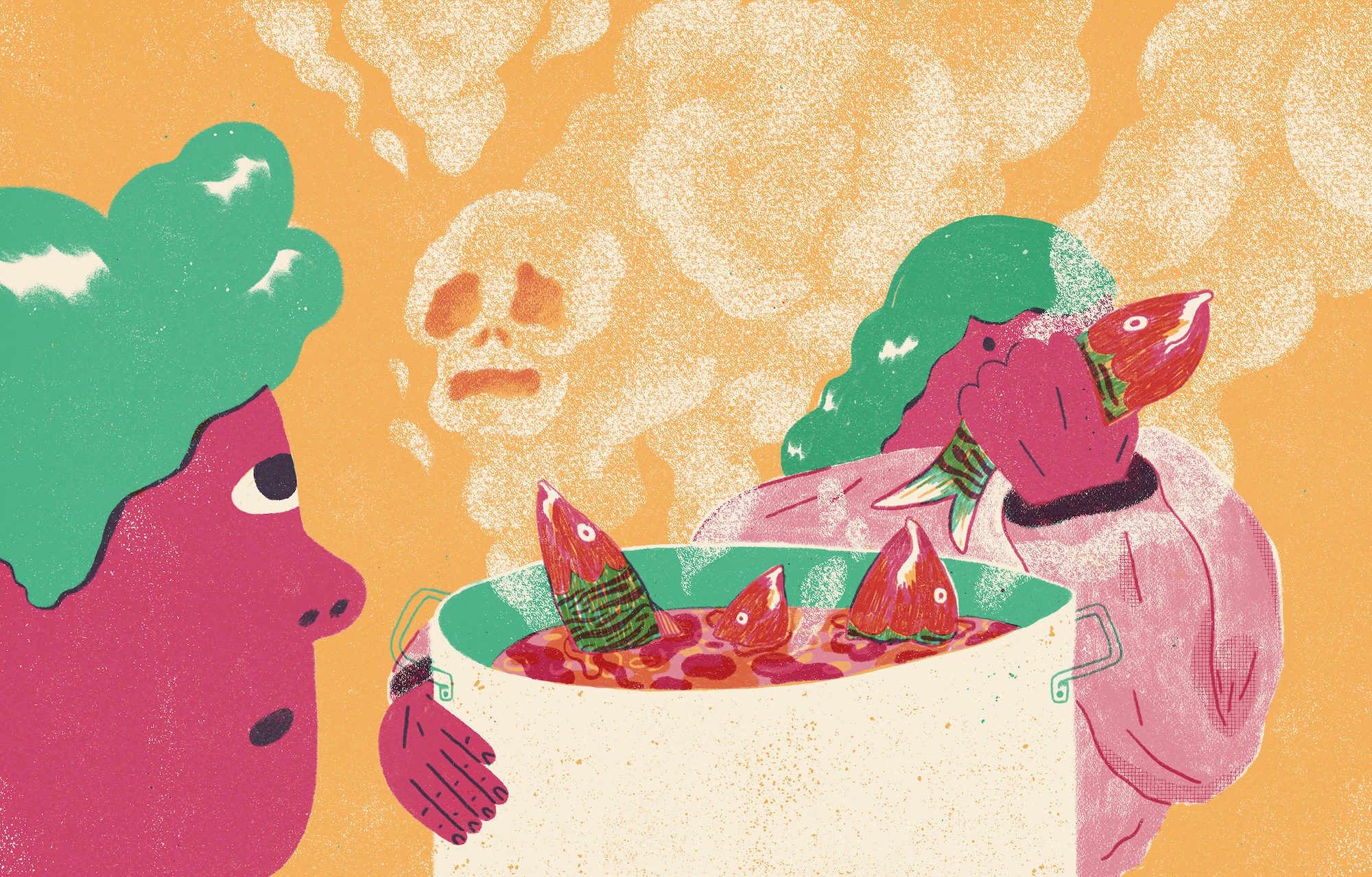 As a Bengali who is violently allergic to fish, I can’t eat the region’s most important food staple: maacher jhol. I’ve been hungry for it for 24 years.

One night this spring, my mother suggested we watch a 2017 Bengali-language movie, Maacher Jhol, that she’d come across while scrolling through Netflix. It was terrible.

In the film, a frail Bengali mother lies in her hospital bed, suffering from epileptic seizures that have left her in critical condition and begging her son to re-create the maacher jhol (Bengali for what unmelodiously translates to “the stew of fish” in English) he made for her years ago. Her son is a trained chef living in Paris, but he struggles to replicate the quiet artistry of a meal that is best cooked and consumed at home.

The movie is a minefield of tired clichés of how food can activate the memories we suppress when we find ourselves far from home. Its aesthetic shifts once the camera turns from the actors’ faces to the actual food they cook. There are extreme, near-pornographic close-ups of red chiles spitting in mustard oil, fish dropping like atomic bombs into hills of turmeric, cauliflower submerged in baths of water, peas rolling into a hot pan. Days later, I couldn’t stop thinking about those shots. I realized that the movie had worked against my better judgment: I was becoming hungry for a dish I haven’t had in 24 years.

See, I’m cripplingly allergic to fish, a biological curse that has reduced me to carrying tabs of Claritin wherever I go, to counter fishy fumes in the air. If the fish makes contact with anything on my plate, I must resort to the melodramatic but necessary solution of stabbing my thigh with an EpiPen.

My childhood was filled with periods of forced seclusion in my bedroom; I’d hide in terror as my mother cooked maacher jhol for the rest of my family, its unwelcome fumes filtering underneath my bedroom door and giving my mouth a vague, unpleasant sensation. I’d sit there for the hour it took her to prepare the maacher jhol before she’d scream with a voice that traveled up the stairs and into the prison of my room, ordering me to come to the table. “Khete esho,” she’d wail in Bengali. “Come eat.”

My mother came to America from West Bengal, the Indian state flush with estuaries, a geographical blessing that has resulted in a cuisine rich with seafood dishes prepared with exquisite care. Perhaps the most beloved of these preparations, though, is maacher jhol.

In her 2008 book, Eating India, Bengali food historian and cookbook author Chitrita Banerji wrote that maacher jhol is “as unique to Bengal as bouillabaisse is to France.” She added that making it is a delicate dance, that “jhol is a paradox, its simplicity belying the trickiness of achieving a perfect balance between flavour and spiciness.” In another of her books, 2001’s The Hour of the Goddess, Banerji noted that to some of her Bengali friends, “it was unthinkable to start the day without the sacrosanct maacher jhol. One might as well not eat.”

West Bengal’s devotion to fish is a gastronomic predisposition that stretches back centuries, according to the late Indian food historian K.T. Achaya in his Indian Food: A Historical Companion. In an Indian context, the affection for seafood is uniquely Bengali. “So much of India’s food is a happy by-product of geography, climate, and culture,” Bengali food writer Mallika Basu tells me. “It’s no surprise given the abundance of rivers in Bengal, and its limited accessibility to the sea owing to coastal mangrove forests, that freshwater fish became an integral part of our cuisine.” Fish is such a cardinal component of Bengali cuisine that it’s practically unheard of for someone from West Bengal to be allergic to it. My fish allergy makes me a walking genetic error; my body ought to be donated to science when I die.

I’ve only eaten maacher jhol once, 24 years ago, when I was two and visiting my mother’s parents in the village where they lived in West Bengal. My still-gestating immune system rebelled against what it couldn’t recognize, a foreign maritime intruder. Though I have no memories of this tale, my mother, now 63, remembers how my small body became pockmarked with hives in its fierce battle to resist those allergens. Every family affair since then has been a source of stress, carrying the threat of a visit to the emergency room. I haven’t eaten maacher jhol at all, forcing me to use my other senses to experience a dish I’ll never taste.

I was doing just fine without maacher jhol until I saw that awful movie a few months ago. To stave off my appetite, I asked my poor mother to take the trouble to teach me how to make maacher jhol via phone, from a place where it can’t kill me. I wanted to decrypt the mystery that has surrounded this dish for me for so long; the closest I could get to knowing what I was missing out on was to find out how it was made. Perhaps if I applied enough effort, my imagination could approximate its taste.

My mother answered my request with a bundle of nine photos. The first showed a mackerel hacked into four pieces, all mercilessly splayed out on a wooden cutting board. The fish was iridescent and slimy, its skin patterned with narrow, arched stripes that resembled tiger fur. Usually when she cooks maacher jhol, she uses carp or catfish, but mackerel was all she could find at the farmers’ market in northern New Jersey.

She walked me through the steps, with photographs of each one to help guide me, as if exposing the details of a process I’d never been privy to as a child hiding in my bedroom, away from my mother in the kitchen. Finally, I could attach actual images to that familiar stench of death from my adolescence: She stains the mackerel skin with turmeric and massages it with salt, letting it rest in a bowl sheathed in plastic wrap. It sits there, undisturbed, for 15 minutes, while she chops tomatoes, onions, ginger, and garlic. She subjects the fish to a shallow pool of mustard oil on a nonstick skillet, frying it gently, turning it over in the pan as its skin begins to tan.

She removes the fish and puts cumin seeds in that same oil. The seeds sizzle in that tiny jacuzzi of oil until it sputters, telling her it’s time to put the onion, tomato, and garlic in. They brown. She adds the ginger, dusting it all with salt, turmeric, cumin, and red chile powder. And it’s a stew, after all, so she pours half a cup of water in to make a gravy that boils so vigorously that it roars, commanding her to add the fish again, covering the skillet for 10 minutes. She removes it from heat. The water calms, and the kitchen quiets. She ladles the maacher jhol onto a plate.

The finished product is gorgeous, four dead fish in a crimson tub of gravy that leaks onto a white pillow of basmati rice. I can smell it through the screen, and the scent strangles my throat. I look at the image and my mouth sweats with an anticipation that will never be satisfied.

Through this lifelong state of hunger, I’ve learned it’s possible to be nostalgic for a food you can’t remember having ever tasted. Being unable to eat maacher jhol has reduced me to a state of daydreaming. I imagine what it tastes like: In my head, the flesh is gummy, its texture somewhere between that of stubborn goat meat and the elasticity of chicken.

That’s where the fantasy ends. I look at that photograph, and my tongue inches toward the roof of my mouth, as if anticipating its ritualistic collapse into an itchy fit. It’s muscle memory. But the image of maacher jhol, and the hunger it conjures, will always send the sound of my mother’s screaming voice ricocheting through my head, telling me it’s time for dinner and summoning me to the table where I belong.