Get a free recipe
Subscribe
The Life and Death of Bombay’s Irani Chai
By: Nik Sharma 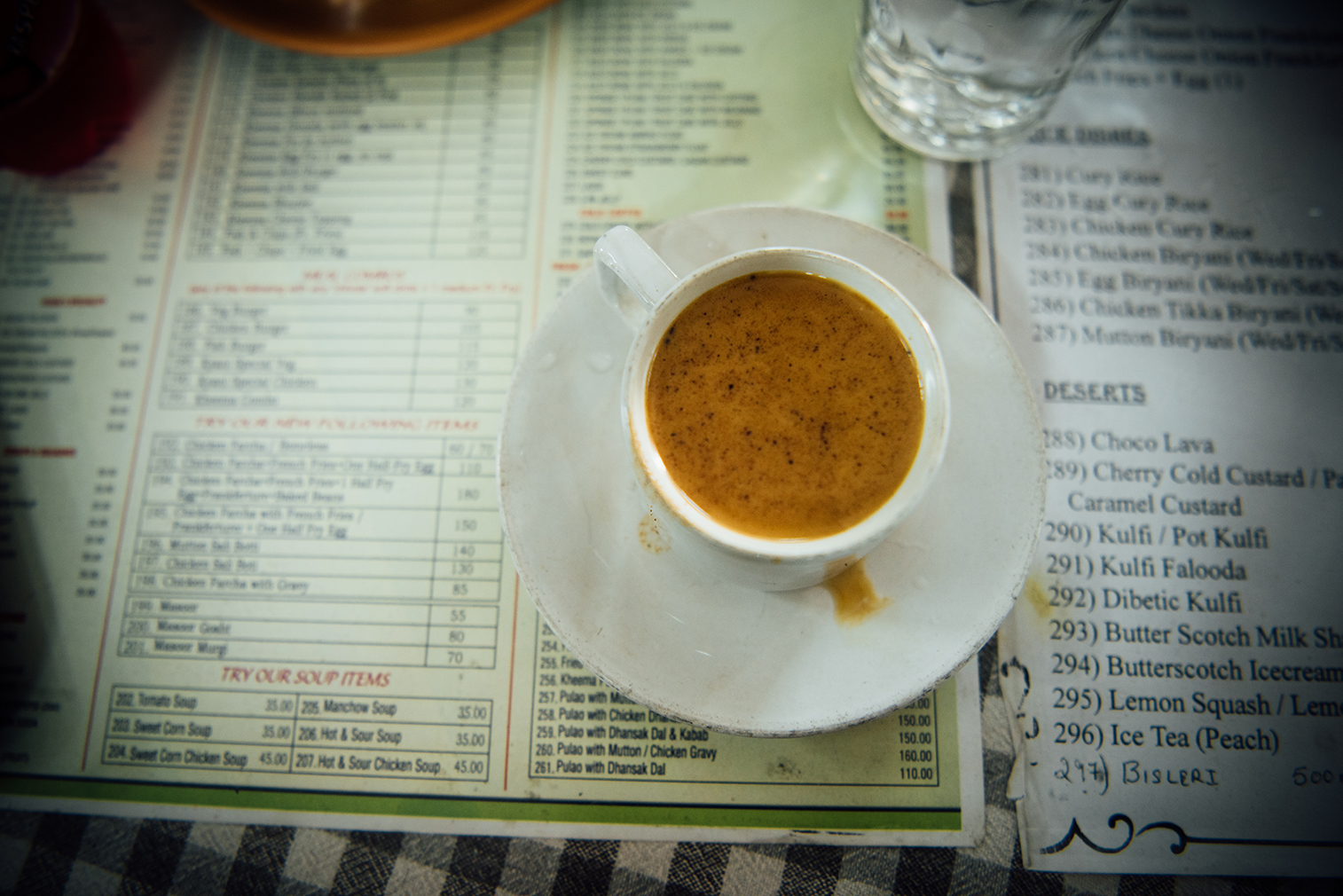 The once-thriving chai shops, a vestige of 19th century India, are shuttering at a rapid rate.

In the streets of South Bombay (I still refer to the city as Bombay, as the name didn’t change to Mumbai until after I left the country), hidden from plain sight by a thick veil of traffic and pedestrians, lie the iconic Irani cafés. Unlike most restaurants or cafés, they lack fanfare or fancy banners, and if you weren’t looking for an exact address, you’d probably keep walking. But these cafés have been an integral part of Bombay culture and history. Established by the Zoroastrian immigrants from Iran in the 19th century, they served as some of the earliest cosmopolitan spots for people to gather and eat during lunch breaks from the office or after a busy day of work in a growing metropolis. The Irani cafés were also popular destinations where people once met to hatch plans to achieve independence for India.

Inside the cafés, the shelves are lined with freshly baked loaves and sweet and savory pastries, like the wafer-like khara biscuit. You can ask for a table and explore the endless options of Zoroastrian cuisine with their distinct Bombay flair, from the crispy fried chicken farcha to a glass of the sweet sakenjabeen (a drink made with honey and vinegar) or a cup of the hot milky tea better known as chai.

The Zoroastrian community left Iran in two waves: The first group left in the early 8th century to escape religious persecution and are referred to as Parsis. The second wave occurred in the 19th century over fear of persecution during the Islamic revolution of Iran. These immigrants are called Irani. Though both the Parsi and Irani communities share the same faith, they diverge culturally. The Irani community also speak Persian languages, such as Farsi and Dari, unlike the Parsis, who mostly speak Gujarati. Furthermore, members of the Irani community are not required to abide by the laws of the Bombay Parsi Panchayat (a governing body consisting of seven elected members). It was this second set of immigrants, the Iranis, who would meet over hot cups of chai to fondly remember their family and friends left behind in Iran. Some enterprising folk saw the potential in these food- and tea-laden meetings, and this led to to the birth of the beloved Irani cafés of Bombay. In the 1950s, there were some 350 Irani cafés in Bombay serving steaming hot cups of Irani chai with plates of brun maska pao (bread and butter), fragrant mawa cakes baked in little tinfoil containers, and plates of kheema pao (minced meat with bread). Now there are a fewer than 100. This decline reflects the problems that many independent small businesses face with the arrival of globalization in India but also another problem: the steady decline of the Iranian culture and population in India. Soaring real estate costs and weak profits have only exacerbated the situation.

Despite this adversity, café owners have tried to stay competitive by introducing trendier foods, including Indo-Chinese dishes like chicken haka noodles or the hot and spicy Manchurian chicken with fried rice (India has a significant Chinese population, and their unique cuisine is reflective of Indians’ preference for bold flavors and spices). The fate of the cafés and their food hangs in a precarious balance.

On a hot summer December afternoon, we climb the steps and walk into the 100-year-old Kyani & Co., one of the oldest Irani cafés still in business. Not much has changed since I last saw it, four years ago. Though the room is mostly dark and unevenly lit, it’s busy and we’re pointed to a square wooden table covered with a green-and-white checkered cloth. I look around, and there are many references to an India of the past. The ornate wood-crafted interiors from the days of the British, large black-and-white framed photos of people I am unfamiliar with, as well as some of the iconic landmarks of the city of Bombay, like the Taj Mahal hotel. On one side of the room there are large wood and glass cabinets that reveal the different breads and cookies that are available for purchase today. There’s also a small separate line where people pick up their preordered breads and cakes. Our menu sits on top of our table, which is covered by a sheet of clear glass. We quickly order since we all have a good idea of what we want. The kitchen is busy—trays of fresh eggs on the kitchen counter keep disappearing as fast as they’re used. Waiters rush in and out with their orders. The food arrives in a matter of seconds, and we dive into it. My cup of chai is steaming, just the way it should be, and makes the perfect beverage to accompany the food at our table.

I’ve missed this. The Irani chai is richer and much creamier than the typical Indian chai that’s made with black tea and milk. The extra milky flavor comes from the use of mawa or khoya, a solid obtained by slowly evaporating milk in large pans and adding it to a pot of tea that’s been brewed by boiling water with black tea powder (as opposed to leaves). This results in a tea with a much more distinct sweetness from the sugars naturally present in milk. This one has a hint of cinnamon.

As I sink my spoon into this little mawa cake and finish my chai, I notice an old grandfather clock on the wall. The second hand continues to tick as a group of college kids walk in and ask the waiter to bring them several plates of akuri (Parsi-style scrambled eggs), buttered bread, and cups of chai. This next generation gives me hope that the Irani cafés might just survive the test of time.

Irani chai is a unique form of tea unlike any other version of Indian chai, made by the addition of mawa or khoya to black tea. The result is a sweet and creamy chai—the addition of spices like cinnamon and green cardamom is optional. While the exact ratios for Irani chai is a secret closely held by most Irani café owners, this recipe gets you the same taste and flavor.

Mawa or khoya is used in the preparation of many Indian desserts and is prepared by simmering large quantities of full-fat milk in wide pans for several hours until all the liquid has evaporated and only the pale-yellow milk solids remain. The milk solids are then removed and either sold commercially or used as needed. You can purchase mawa or khoya at most Indian grocery stores across America, but if it’s hard to find, use dry milk powder (a good but not perfect substitute).