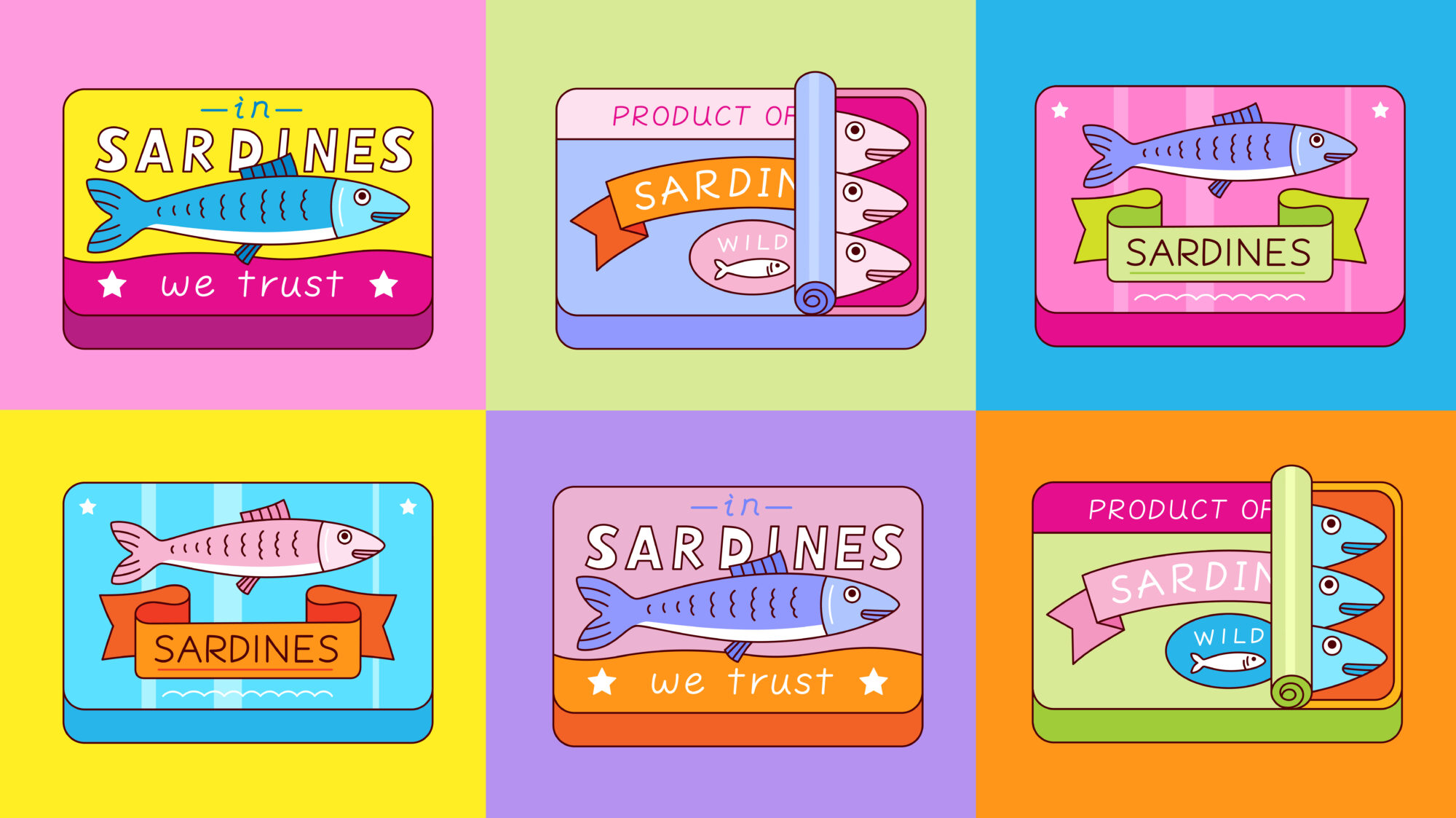 “I know it looks gross, but it’s soooo good—you have to trust me on this,” says Sakura Considine, a fashion and beauty influencer in a popular TikTok video. Her French-manicured hands are pulling the silver aluminum lid off a small, oval tin of sardines in miso sauce against a white background, as her voiceover explains that this can of sardines was something her grandmother served her over rice when she was little.

Considine goes on to list the little silvery fish’s many health benefits—it’s high in protein, omega-3 fatty acids, calcium, vitamin D, and vitamin B12 and low in mercury—adding, “This is also really good for hair growth, which you guys know is really important to me.”

Sardines were once working-class sustenance, packed in shelf-stable tins ready to pull open and plop the oily species all over a piece of bread, no utensils required. While that association has not exactly left the food entirely, today, a younger, wealthier, more refined generation has helped make sardines a trendy superfood. The health benefits are not the only draw. Sardines, with their relatively mild, slightly fishy flavor and meaty texture are less polarizing than, say, the salty tinned anchovy. And yet they’re also more exciting than the sandwich-staple tuna. Hence, they’ve become a marquee name in a bona fide tinned fish revival of the last several years. And they’re still as inexpensive and convenient as older generations might remember them.

Anna Hezel, author of the upcoming cookbook Tin to Table: Fancy, Snacky Recipes for Tin-thusiasts and A-fish-ionados (and former TASTE senior editor), says that sardines are a “gateway” fish for a lot of people just exploring tinned seafood: “They’re pretty neutral, and you can do a lot with them, and they can be cheap but also fancy.”

She recommends a sardine-topped rice dish by Naoko Takei Moore, which Hezel has riffed on in her cookbook to incorporate sweet corn and shiso. It’s an elegant and simple recipe that infuses the flavor of the fish throughout the rice, “using a $3 tin of sardines,” she says.

Others recommend showcasing the natural taste of the sardines on bread with nothing more than a smear of good butter and a couple flecks of flaky salt. A few contrasting bites to snack on, like pickled peppers or radishes, can help round out the board. 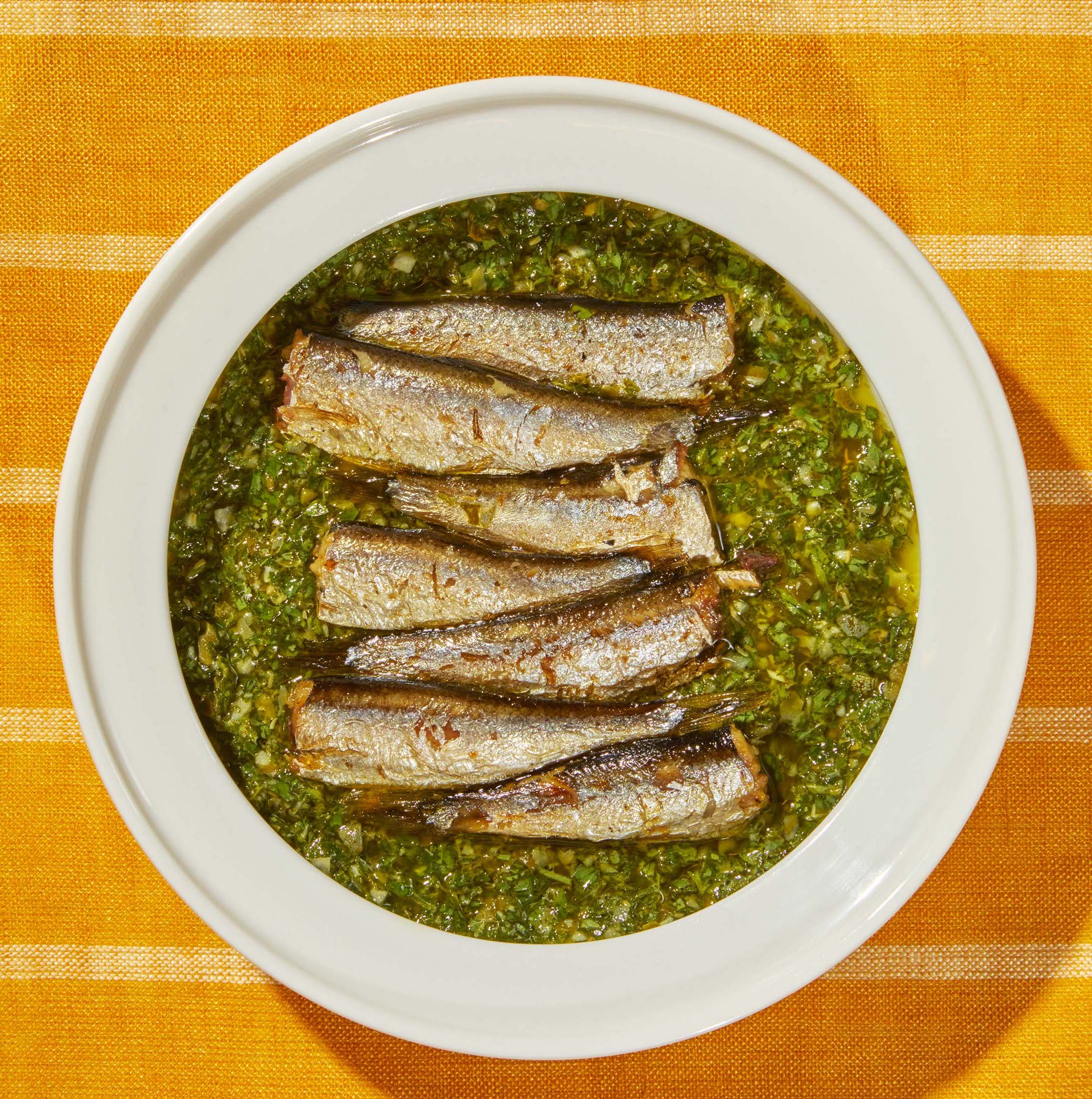 “Tins have become as varied as wine,” says Kathy Sidell, owner of Saltie Girl restaurants in Boston, London, and a recently opened Los Angeles location, which sells 30 types of tinned sardines—and that’s just sardines, among a wall of other tinned seafood. They’re packed with everything from tomato sauce to lobster oil to lemon confit and chile peppers. All these tin varieties read like a wine list, too, alongside an extensive, ultraluxe menu that includes raw seafood towers, caviar, and a $249 Wagyu steak.

Saltie Girl is part of a wave of buzzy spots around the country to highlight conservas, as the tinned rations of food are known in Spain and Portugal. The current tinned fish revival has also prompted online marketplaces like Tin Can Fish and the Tinned Fish Market, more books, and a fervent online fan base that often shares images of their tins and fish.

Indeed, there might be something about the tinned fish aesthetic that’s partly driving the sardine boom. The iconic rectangular cans, in which the fish are packed in alternating rows, decapitated head to de-finned tail, inspire euphemisms (“packed like sardines”), nostalgia for a pre-plastic era of food production, and paintings galore.

At the same time, tin designs are becoming more sophisticated. While vintage packaging like Minerva’s or King Oscar’s has its own appeal, newer producers like Jose Gourmet and Ar de Arte have curated a collection of illustrations by local artists for their boxes. These designs are all helping to attract a new audience to an old-world product, says Sidell. And for aficionados, stocking a full pantry of them is akin to collecting baseball cards—albeit ones you can serve with a stack of sourdough crackers.

For the adventurous, hunting down rarer (and often pricier) delicacies like smoked octopus, cockles, and uni might be the pinnacle of tinned seafood satisfaction. Sardines, however, are steadfast. They’re ubiquitous on grocery store shelves (at least one or two varieties, that is) and yet seemingly endless in array—“lightly smoked” is just the beginning. There are also sardinillas, a smaller specimen with their tender tails preserved. The prices for tins range, but never wildly so, the way that those for bottles of wine can.

But these are still the least of sardines’ virtues. The widespread accessibility of the tinned fish might clue you in to the fact that sardines are one of the most abundant fish in the oceans. And as with other wild, small pelagic fish like anchovies and sardines offer some of the lowest greenhouse gas emissions per nutrient density for the human diet.

Most of these smaller fish that are caught, however, are destined for nonhuman consumption, such as aquaculture and livestock feed. And that’s where the greatest inefficiency in our seafood eating habits today lies: these little fish are being fed to larger, carnivorous animal species (like farmed salmon, which come from an industry rife with pollution and ecological damage) so that humans can eat those animals. But you lose so much would-be food and nutrition in this production chain when you feed smaller fish like sardines to a salmon to grow it for human consumption. You also increase toxins in that salmon or larger animal through a process known as biomagnification. So why not just eat the sardines yourself?

“There would be this incredible, four-to-sixfold increase in meals from the ocean on planet Earth, and there wouldn’t be the degradation of natural, pristine ecosystems that are converted to fish farms around the world,” says Bill Carvalho, founder of Wild Planet Foods, a US-based canned seafood brand.

Founded in 2001, the company began by selling tuna before adding sardines to its products in 2010. Carvalho, the grandson of Portuguese immigrants, grew up eating all kinds of seafood and learning to can them at home, picking up raw tuna from the fishing piers in Eureka, California, and pressure-cooking it in jars.

Wild Planet’s sardines now outsell its tuna on a per-unit basis in natural grocery stores, says Carvalho. That could indicate that a lot of people are now interested in sardines for sustainability or health reasons. But it’s also a product that really benefits from being consciously reintroduced to customers, he says, adding that in-store demonstrations are the company’s most effective educating strategy.

“People say, ‘Oh, my grandfather used to eat those with crackers,’ or ‘Oh, that’s gross,’” says Carvalho of customers’ initial reactions to sardines.

The in-store representative giving the demonstration would then give them the health-driven pitch: vitamin potency, omega-3s, low mercury. Maybe hair growth. Then they would offer a taste.

“They would see that [the sardines] didn’t look so bad, and they’d take a taste, and boom—gained a lot of customers that way.”