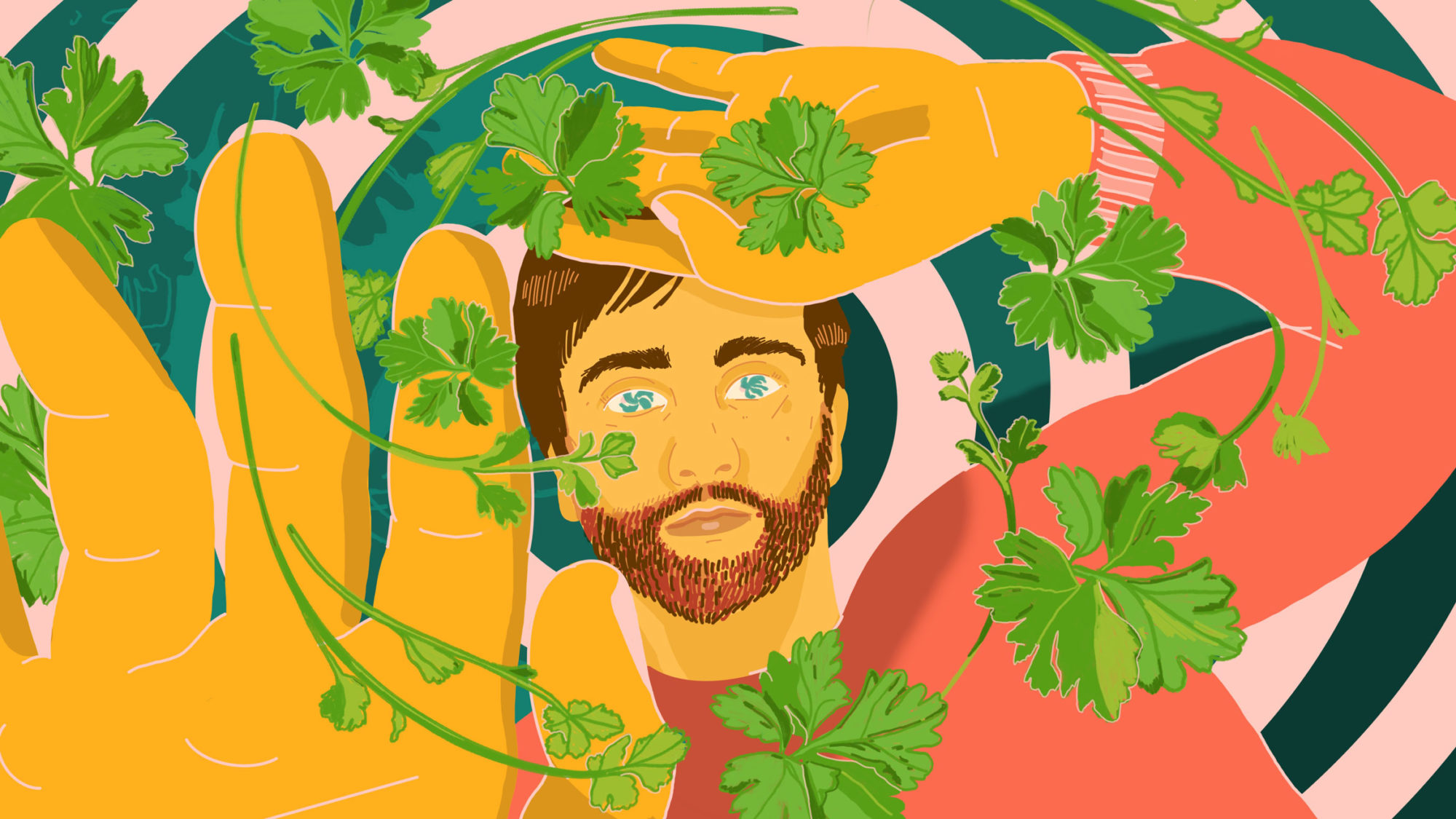 When science showed that genetics may be responsible for the herb’s divisive nature, many felt validated. It might be time for a reconsideration.

In my innocent years, I knew cilantro by a different name. At home, it was ngò, the Vietnamese word for Coriandrum sativum. As a kid, I’d always associated cilantro with deliciousness; it was only one letter, one consonant sound removed from the Vietnamese word for “delicious”—ngon. It was ubiquitous in our dinners as a garnish, the leaf’s vibrant essential oils activated upon contact with scalding broth or a blistering stir-fry—anything, really—and it brought a sort of floral energy that established a sense of home in the dish, a harmony that felt so intrinsic to my family that it may as well have been an heirloom.

In middle school, when left to my own devices to pack lunch, I made my ham and cheese sandwiches, carefully cracking black pepper onto the mayonnaise spread on both slices and adding a few sprigs of cilantro on the top slice to nestle with the lettuce. With that small addition, the sandwich’s namesake hierarchy of ingredients dissolved completely; American cheese and packaged ham slices became supporting players to round out cilantro’s razor-sharp profile.

Cilantro has been cultivated for millennia, and although it’s a vital herb in many of the world’s great cuisines, its distinct characteristics have been reviled in culture nearly as often as they’ve been celebrated. John Gerard, who wrote The Herball, or, Generall Historie of Plantes, the most influential English botany book of the late Renaissance period, referred to green coriander as a “very stinking herbe” with “venemous” leaves.

Like a percentage of the human population before and after him, Gerard must have had a traumatic first experience with cilantro at some point in the late 1500s, one that fundamentally shaped his relationship with the herb and how he perceived it thenceforth. He tasted something akin to poison, and his brain coded his disgust as such—an event known in science as a conditioned taste aversion (CTA).

Cilantro doesn’t kill us, but it does divide us.

“Conditioned taste aversions are thought to protect animals, including humans, from ingesting a relatively unfamiliar food that is toxic,” Alan Spector, a distinguished researcher in neuroscience at Florida State University, tells me. “Unlike other learning phenomena, a CTA can be formed in just one pairing of ingestion with visceral malaise.” (This commonly includes vomiting or nausea.) The evolutionary purpose, of course, is to prevent animals from eating the same poison twice. When an aversion is formed, it can be psychologically difficult to shake. It presents itself in spine chills, electroshocks, gag-inducing astringency. For a cilantro hater, that means every bowl of salsa is a potential landmine, and every bowl of pho presents a body of infested water.

Cilantro doesn’t kill us, but it does divide us. For some, encountering cilantro’s pungent taste is akin to getting flakes of industrial detergent stuck between the teeth. Cilantro can inspire a revulsion so strong that it is, in itself, a community builder. In these uncertain times, a cilantro hater can, at the very least, feel the warmth of 280,000 like-minded souls on the I Hate Coriander Facebook page, wherein a handful of (dis)tasteful cilantro memes are posted daily, to hundreds of likes. But why does this particular herb, which plays such a key role in Chinese, Peruvian, and Thai cuisines, make so much noise, one way or the other?

It was a full decade ago that researchers began unpacking the question. In April of 2010, the food science writer Harold McGee wrote a New York Times article that gave shape to cilantro’s previously ill-defined polarity. As McGee explained, it comes down to how a person processes certain fatty compounds known as aldehydes, known especially by perfume manufacturers for their strong aromas and odors. The particular aldehydes found in cilantro are near mirror images to ones in soaps, lotions, and certain bug secretions. This is why those who have the capacity to articulate their hate of cilantro often use those specific scents and flavors as comparisons. McGee’s article was the first in the mainstream that referenced genetics as a potential factor in how a person perceives the taste of cilantro.

Two years later, researchers at 23andMe, the popular direct-to-consumer DNA testing company, took the implication a step further. The company asked its customers whether cilantro tasted soapy to them; among those who answered at the time, 12.4 percent said yes. In comparing data sets of those who liked and disliked the taste of cilantro, they found a genetic variant in a cluster of eight genes, one of which codes for OR6A2, a smell receptor that is known to detect aldehydes. At last, concrete genetic proof.

“We had a few folks who worked at 23andMe who fell into the camp of really, really, really disliking cilantro,” Shirley Wu, 23andMe’s director of health product, told me. “And when you’re that passionate about something, it tends to come out in your work.” Joyce Tung, 23andMe’s vice president of research, was one of the scientists in this camp. “In Chinese, the word for ‘cilantro’ basically translates to ‘fragrant vegetable,’ but my brother and I called it ‘stinky vegetable,’” she says. Tung may have a predisposed genetic aversion, but culture made the herb a necessary evil her whole life. “My parents didn’t really force us to eat it, but in some dishes, it’s kind of unavoidable. Fast forward to adulthood, when I married into a Mexican family and am even more exposed to cilantro.”

“It’s interesting that people sometimes feel the need to have this kind of objective rationale for why they feel something before they can accept it as a valid feeling.”

There is a certain convenience in seeing fragments of our lives hardwired by genetics, in feeling the strange comfort of accepting an immutable fact about oneself. As Wu puts it, “It’s interesting that people sometimes feel the need to have this kind of objective rationale for why they feel something before they can accept it as a valid feeling.” But according to the company’s study, the genetic variant they discovered in 2012 accounts for only 0.5 percent of why cilantro tastes soapy to some, and its researchers suggest that cilantro aversion has low heritability. In other words, whether we love or detest cilantro is a story we tell ourselves based on the experiences we’ve had, not the genes we’ve inherited.

The author Alison Kinney was 17 when she had her first taste of cilantro, at a Vietnamese-American Presbyterian church supper. She thought she’d been poisoned, she wrote, in an essay about her experience with cilantro for The Inquisitive Eater. But a few years later, Kinney’s perception changed. She started dating someone who put cilantro in almost everything he cooked and who took her to restaurants where cilantro was an unavoidable, mandatory presence. It horrified her until, suddenly, it didn’t.

“Animals and people are always forming associations among stimuli and experiences in their environment, and so one should never rule out the possible associations that can be formed,” Spector (who, coincidentally, considers cilantro his favorite herb) tells me. “For example, most people do not like their first taste of beer or coffee. Over time, however, people come to crave the flavor.”

In Kinney’s case, that’s exactly what happened with cilantro. In dishes like Northern Chinese tiger salad, she tells me, “I’ve begun to think of cilantro as a vegetable in its own right, rather than just an accent/sauce herb.” The sudden paradigm shift that cilantro brought upon her gave her license to reevaluate other relationships she had with the world in adulthood. “I’m still in the you-can-change-your-mind-about-taste camp, and I think that this applies widely to areas beyond food,” she said.

But for some, this open-mindedness doesn’t come so easily. Earlier this year, over a bowl of pho, a friend explained how her distaste for cilantro intensified so much because of her Chinese mother’s insistence upon adding it to everything she cooked—noodle soups, stir-fries, salads. She jokingly lamented inheriting her distaste for cilantro from her white side, but she admitted her relationship with cilantro was as much about the taste itself as it was about the lack of agency under the eye of her demanding mother. The herb became a vector of the complicated emotional landscape between generations, one that she happily casts aside at restaurants. These contexts, more than DNA, are what shape our senses.

A few weeks ago, my partner and I left a bundle of cilantro in a cup with some water at the start of the week, fully intending to garnish all of our weekend projects: phở gà, gumbo ya-ya, Fieri-style trash-can nachos. But plans changed, the weekend passed, and so did the vitality of our cilantro. The leaves went limp, and some turned a pale yellow. The water at the bottom of the cup had been stained brown; the base of the stems and the tops of the taproots had rotted into slime. Before tossing the entire bundle into the compost, I plucked a sprig that retained its verdancy and brought it to my lips. It suddenly tasted and smelled just like they said—used soap, a cocktail of grit and gunk and sterilant melding together. I found myself delighting in my disgust. My beloved cilantro had to asphyxiate and die before it resembled to me what its haters have sensed in it all along.

Danny Chau is a freelance writer and editor. He was a James Beard Foundation Award finalist in 2019.