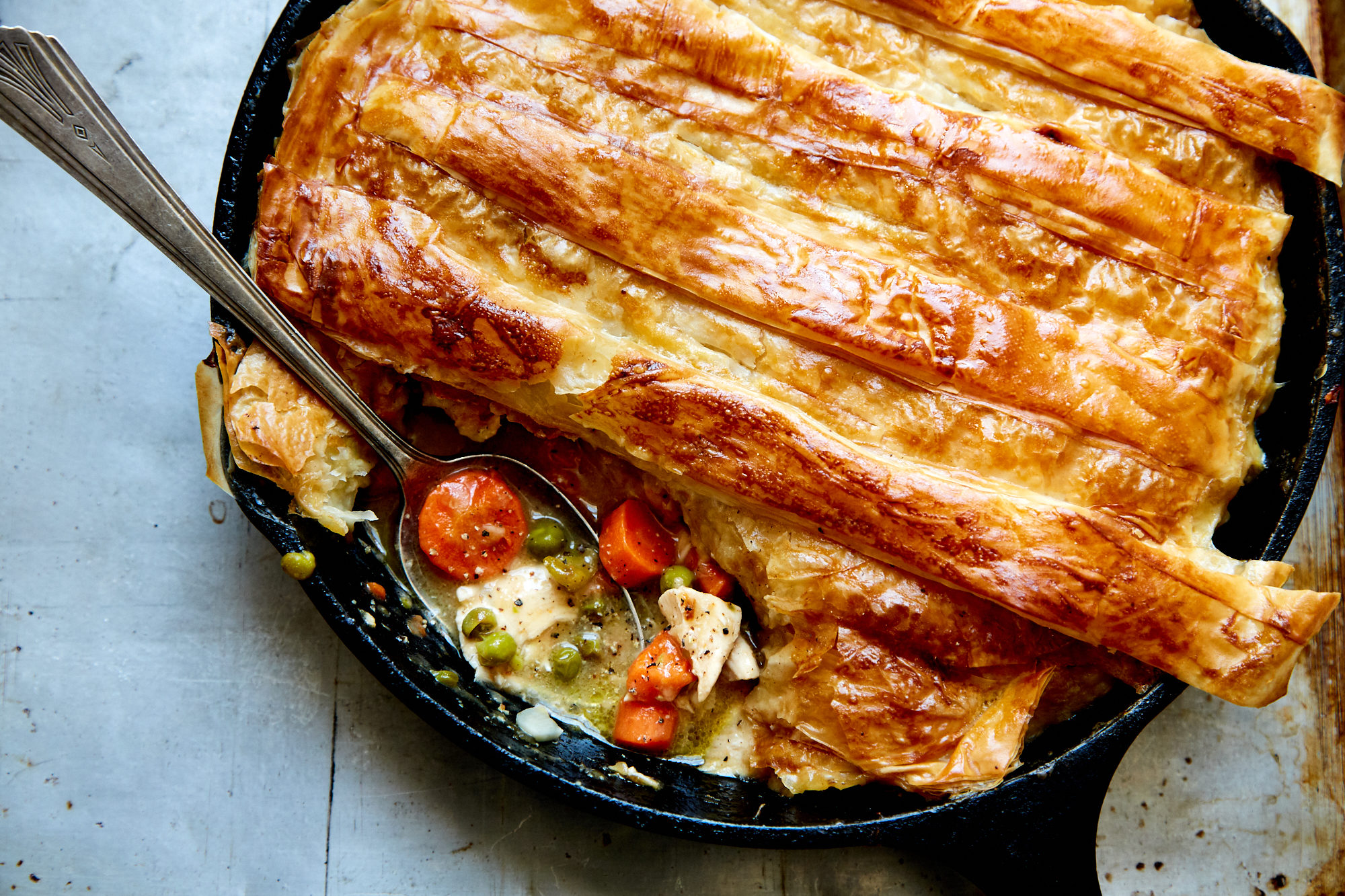 CPP isn’t just something you reheat from a deep freeze. It’s a meal with a built-in sense of suspense and a big reveal.

I can understand why a hearty chicken pot pie may provoke a, shall we say, less than enthusiastic reaction from an entire generation of former latchkey kids. Chances are that if you were the ward of working parents, you could return to your childhood home right now and find at least one individual chicken pot pie smashed deep into the recesses of the basement freezer. When rations of chicken nuggets and Kid Cuisines ran dry, only then would one reach for those crushed cardboard boxes filled with gloopy chicken goo and peas, encased in a soggy pastry with soft notes of BPA.

Like most foods whose good names have been sullied by mass production and freezer burn, chicken pot pie can be exciting when made the right way. Using garlic-butter-layered filo instead of a from-scratch pie dough not only makes your life easier, but gives you a crust that’s meltingly tender on the bottom and brilliantly crisp and flaky on top. Hell, if you wanted to swap out the chicken for a precooked rotisserie bird, I wouldn’t have a problem with it. When the moment comes to cut through that crispy top layer, out come all the rich scents of lightly roasted vegetables, roux-thickened stock, and juicy shredded chicken. Once upon a time, a bird-filled pie would have been considered the height of entertainment and luxury. You know that nursery rhyme where four and 20 blackbirds were singing their little hearts out from inside of a pie? Historical texts from the 16th century tell tales of medieval party dishes baked full of teeny birds who would burst out of the top crust to fly away to sweet, sweet freedom. There were platters of peacocks shrouded in their own feathery flesh to look alive, their beaks stuffed with camphor-soaked rags that were to be lit at the table so they would “breathe” fire like mythical beasts. Stuffed capons were dressed with small gold-leafed helmets and lances, then sewn atop a roasted pig as if they were valiantly charging into battle. Chickens’ necks were stuffed with a mixture of mercury and sulfur, which would make the bird sound as if it were singing once it was piping hot. Sotelies, as they were called, were seen as whimsical showstoppers full of oyster stuffing, toxic chemicals, and vengeance against birds.

In the 21st century, our bird-filled pies are admittedly a little less exciting and a lot more practical. While you’ll occasionally see a masterwork savory trompe l’oeil on Instagram—such as Rene Redzepi’s “Duck Foot” Fudge, or Ritz Crackers’ Bacon Cheddar “Football”—it seems as if the days of grandiose bird pies are long gone.

Maybe you can’t jam two dozen live birds into a pastry crust, but you certainly can wow your friends, family, and the Internet with this masterpiece’s modern cousin, the pot pie. They’ll never know how it was so easy to make something so regal. And if its spectacular flavors don’t do it for you in the same way a flaming peacock does, spackle it with gold leaf, sprinkle on some glitter, and add a bunch of food coloring to the filling for a festive chicken pot pie that’s sure to be the highlight of any gender-reveal celebration.