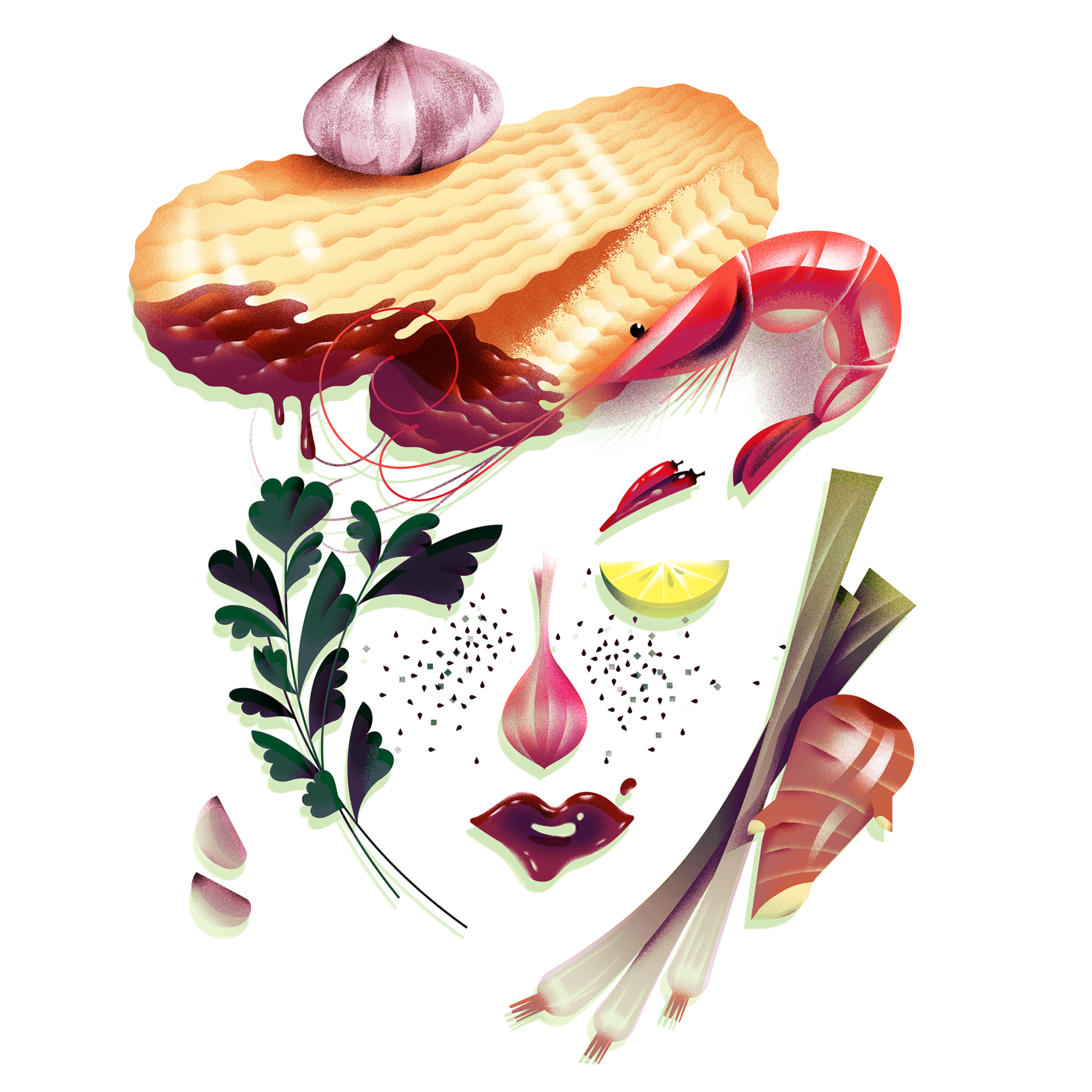 What happens when immigrants have to adapt to cooking in a new home? A new cuisine, forged from sensory memories and new ingredients.

Watching The Motel, a 2005 indie film about a Chinese-American family who own a motel in the middle of nowhere, was a revelation to me. I’ll always come back to the scene in which the mom, as a special dinnertime treat, buys McDonald’s for her family. She carefully unwraps the burgers and cuts them in half, placing each half on top of a bowl of white rice. I have never felt so understood by a movie.

When I was a kid, my comfort food was hand-torn slices of cheap, paper-thin cold cuts scattered over jasmine rice and sprinkled with precious drops of Maggi seasoning. To my grandmother, it was an improvisational snack for picky grade-schoolers. She’d adapted in this way ever since our family spun the refugee-sponsorship roulette wheel and ended up in rural Freeport, Illinois, along with just a few other Vietnamese people. Nothing was familiar. And so our family’s sponsor, the sort of German Lutheran woman whose cohort formed the bedrock of the modern American Midwest, taught my grandmother how to make meatloaf.

When immigrants adapt to their new surroundings, the most immediate way this happens is through the food they make: They look around at what’s available and try to make it into something they can recognize. My grandmother’s culinary ingenuity was born out of having to puzzle out a way to feed her eight children every day with the varied and unfamiliar donations they received through their church.

Once my grandparents learned about Chicago’s wealth of Asian grocery stores, they began making occasional two-and-a-half-hour pilgrimages to the city to stock up on precious imports like Maggi seasoning, rice noodles, and fish sauce—ingredients that, to a Vietnamese-American, could make even a piece of Wonder Bread taste something like home. When I learned more about Vietnamese cuisine, I was surprised to learn that dishes I loved, like nui ga (chicken soup with rotini) or banh mi on sliced white bread, didn’t exist in Vietnam.

Yia Vang, the chef and owner of the Union Kitchen pop-up in Minneapolis, still fondly remembers his mom’s take on the spaghetti and meatballs that he encountered at school as a kid growing up in small-town Wisconsin. “My mom didn’t speak English, and she couldn’t say ‘spaghetti,’ so she always called it ‘soup.’ Meatballs were more like a ‘Hmong sausage’ style—pork with ginger and garlic—and everything was mixed together with Prego sauce and lots of cracked pepper, Thai chiles, and garlic. The dish changed my world because it was the first dish that we ate for dinner that didn’t include rice.” At his dinners, Vang tells a similar story with ambitious dishes like tater tot hotdish with curry gravy, parsnips, bamboo, and Hmong sausage. Using hotdish—the iconic Lutheran penny-pinching casserole—as a template for Hmong flavors, Vang is able to draw poignant connections between his family’s story and the stories of their Wisconsinite neighbors. The kind of food that comes out of these circumstances doesn’t really have a widely recognized name or category. It’s not quite “fusion”—the merging of two disparate cultures that’s often made to impress or surprise, especially when “upscale” dining is paired with ingredients a chef seemingly scrounged up from the “ethnic” aisle of the grocery store. As a concept, fusion stinks of the imperialist instinct to civilize foreign cultures and rehabilitate them into respectability.

Rather, what I’m talking about is food that’s made to close the gap between homes: a critical need when one lives in exile. It’s hard to give it a label, but other immigrants and children of immigrants recognize it when they see it. Unlike “fusion,” which is often focused on aesthetic innovations and mashups, these immigrant dishes are more like culinary fugues, organically building upon a kernel of a memory over the course of generations and developing into a complicated and layered narrative. Like with any immigrant story, this style of cooking is all about telling the story of a family through its subtle gestures, quirks, and out-of-place ingredients.

“It’s in-between food,” says Saqib Keval, a chef and cofounder of Oakland’s People’s Kitchen Collective. His all-time favorite comfort food was born from his Indian–East African parents’ attempt to satisfy a childhood demand. “I always wanted crispy tacos, so they would stuff taco shells with leftover Bolognese sauce or curries. To this day, that’s what I crave.” His family’s rendition of Bolognese, a symbol of the protracted power struggle between Ethiopia and fascist Italy, is made with berbere, niter kibbeh, and discount ground beef—an ingenious melding of flavors that fed his family as well as many others in their community. Keval hypothesizes that this kind of cooking is powerful because of how it grants colonized subjects a degree of agency. By adapting the cuisine of their occupiers and warping the “authentic” flavors with their own, they’re able to reframe that relationship on their own terms.

It’s like any other comfort food, Keval says. “It comes from a longing for home. Second- or third-generation immigrant kids might not ever be able to taste what our families originally ate, but we still long for it—the taste is coded into us.”

It’s the reason why I find the particularity of this kind of hyphenated cuisine so interesting: Rather than participating in a debate about authenticity, this style of cooking questions the very concept. It wrestles with the tragedy of losing one’s proximity to the familiar by seeing how far we can stretch a dish like pho or doro wat without losing its soul. It’s a question that so many children of immigrants ask of ourselves.

Banh khot is the regional specialty of Vung Tau, my family’s hometown in Vietnam. Normally, it’s made in a cast-iron pan with small, domed wells, much like aebleskiver or takoyaki pans, with the shrimp on top. My mom and I came up with this rendition of it, which is a lot more accessible if you don’t have that kind of pan. If you want to get super fancy, grill the shrimp separately and brush with the scallion oil to use as a topping.