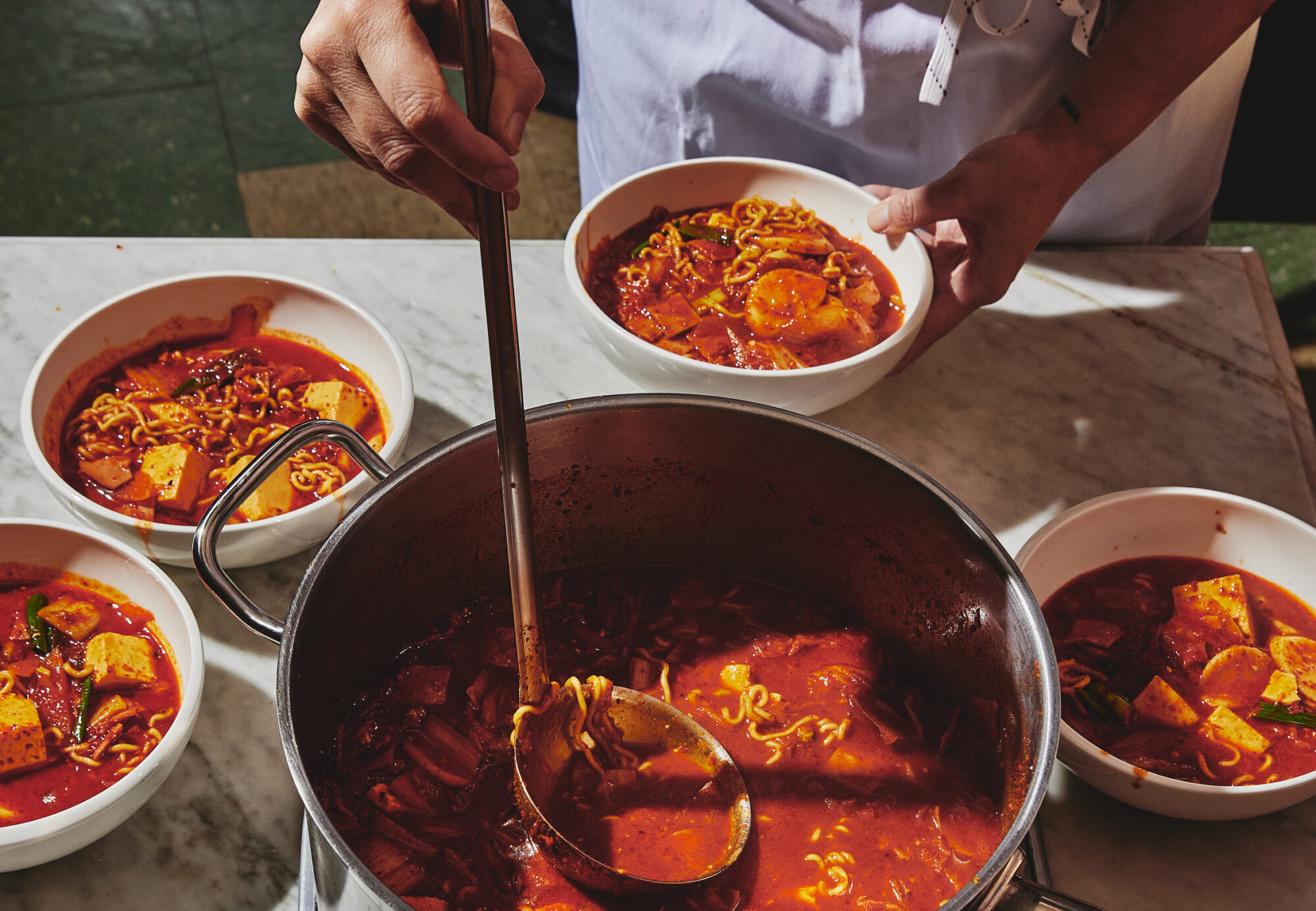 In an industry where family dynamics aren’t always a good thing, a “family meal” shared among staff can still act as a grounding, congenial ritual.

In the spring of 2020, I found myself, like so many others in the hospitality industry, unceremoniously unemployed when the restaurant I was running was forced to close because of the pandemic. Suddenly, without structure and the constant demands of running a kitchen, I was thrust into a life of leisure (amid a deadly pandemic), which came with a healthy dose of emotional ups and downs. Fear, sadness, and anger mingled in the dark corners of my mind with profound—and guilt-stricken—waves of relief. For the first time in my adult life, I had no demands put on my time and no pressures to produce a quantifiable body of work (I was fortunate to receive unemployment and PUA payments during this time, while many others were not). The trade-off, however, was a universally bleak state of affairs and a jolting halt to my sense of purpose.

There is no doubt I missed it: the ineffable sense of community that comes from working in restaurants; the solidarity that comes with the velocity of nightly service; that sense of togetherness that binds all levels of staff in pursuit of a common goal. The depiction of the restaurant as a “home” prefigures and complements another word that is used to describe the group of owners, managers, cooks, porters, servers, bartenders, barbacks, and runners that make up a typical food and beverage establishment, and around which the past two years have seen considerable debate: “family.”

As our collective awareness of toxic kitchen culture, tyrannical chefs, and labor exploitation in the food industry has increased, the notion that restaurants could ever be families suggests a pretty bleak home life. Consider the examples of some of the country’s most reputable and esteemed chefs, whose careers and professional achievements were lauded for years by prestigious food media outlets but who were later revealed to be complicit in the collective malpractice that occurred in their respective restaurants, as I detailed in The New Republic back in July 2020.

Much has been written on the topic of the problematic implications of using “family” to describe one’s workplace, and not only in restaurants. Calling work teams “families” in the context of an “always on” culture may be some form of gaslighting, depriving employees of the permission to be full human beings with wants and needs. 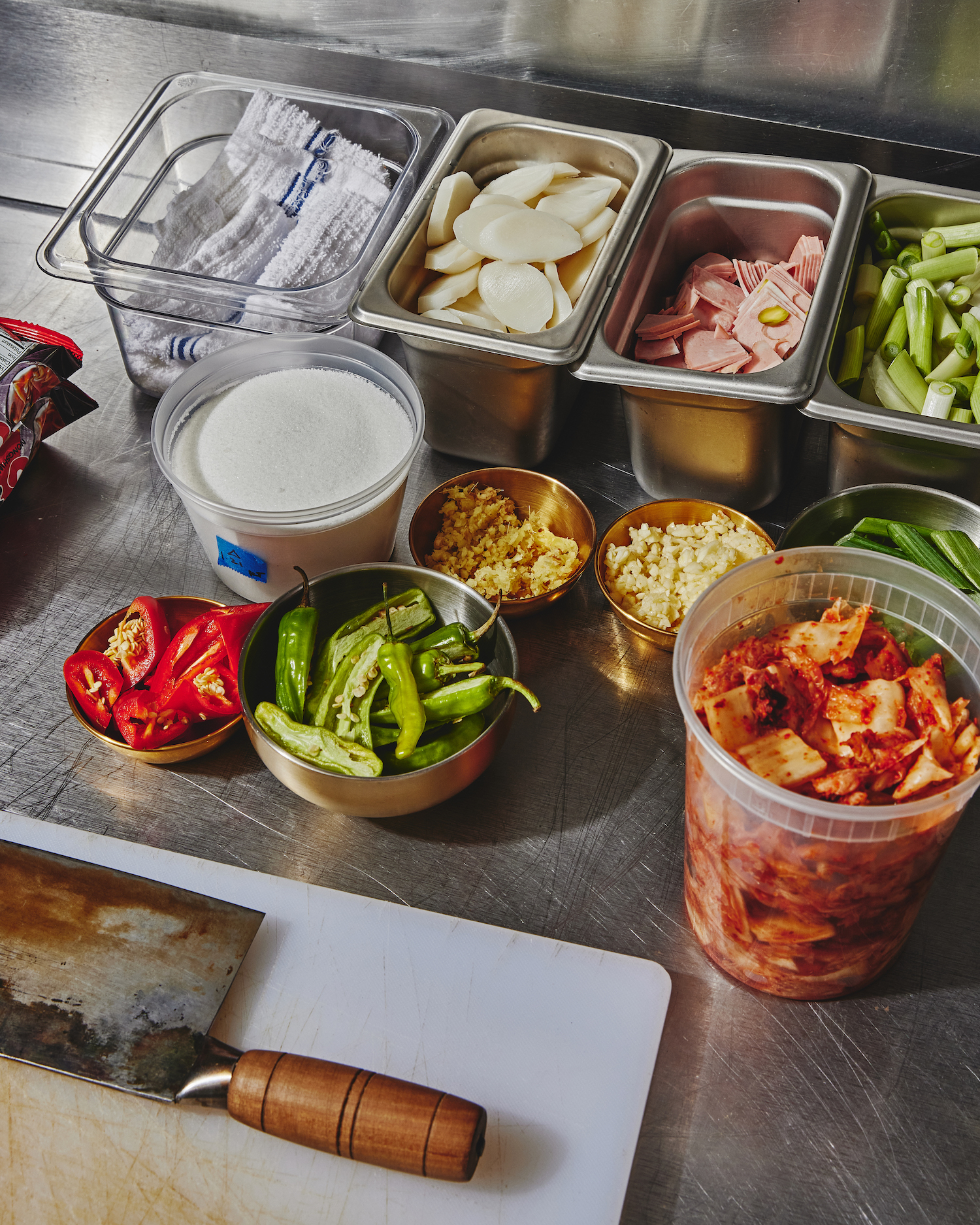 In restaurants specifically, the family analogy makes an already complex work environment typified by long hours and intense physical demands even more complicated. Chefs often assume the role of patriarch or matriarch, and those who fall under that hierarchy are treated as (and, in turn, behave like) wards with a de facto deference to the one in charge simply because there is no other option. Until very recently, most restaurants operated without the baseline safeguards of “normal” professional settings, like an HR department. Restaurant workers are still frequently told to “suck it up” or “forget about it” when they get injured or find themselves on the receiving end of inappropriate treatment or abuse.

This can all lead to a shared traumatic culture that gets reinforced day in and day out, as restaurant staff will often equate the completion of their shift with “surviving” another night. It also creates bonds among staff in a way that makes them hesitant to speak up when there is mistreatment happening within the ranks and from above.

And while I agree that there are unreasonable expectations of care, concern, and responsibility heaped onto that one word when it’s used in this way—that the characterization of the relationship between bosses and workers as “familial” can legitimize all sorts of abuses and manipulations on the part of management, and that the term “family” is overall best avoided in the context of restaurants—there is one exception to that rule that I am willing to make, and that is for the institution of “family meal.”

It’s a meal that is meant to be enjoyed by everyone, regardless of job title; when coworkers can break the proverbial (or sometimes actual) bread.

Family meal takes a different shape from restaurant to restaurant, and the parameters are often unique to each operation, but the general idea is somewhat universal—from casual corner cafés to fine dining establishments to lofty dim sum halls in Chinatowns across the country. It should be a scalable meal—that is, it feeds a crowd, won’t cost a ton, and is made for the entire staff to enjoy together in a moment free from the stresses of service—typically served before the doors open to the public for a nighttime-only restaurant, or sometime between daytime and evening service for a place that remains open all day.

It’s a meal that is meant to be enjoyed by everyone, regardless of job title; when coworkers can break the proverbial (or sometimes actual) bread; when cooks can break free from the constraints of making menu dishes and throw together something of their choosing. A cook at a high-end Italian restaurant might be moved to make pad thai, or a chef at a French Moroccan restaurant might have an opportunity to use a scrap rack of ribs to prepare a BBQ-inspired spread; sometimes a kitchen team might come together to create a cookout-themed meal, with each member responsible for one aspect, giving it a potluck feel.

The word “family” may be freighted with problems when applied to the restaurant’s ecosystem as a whole, but there is something undeniably different about restaurant work when compared to other types of labor. Part of what makes the work and the environment unique is this collective pause, every day, around a shared meal and a common table. 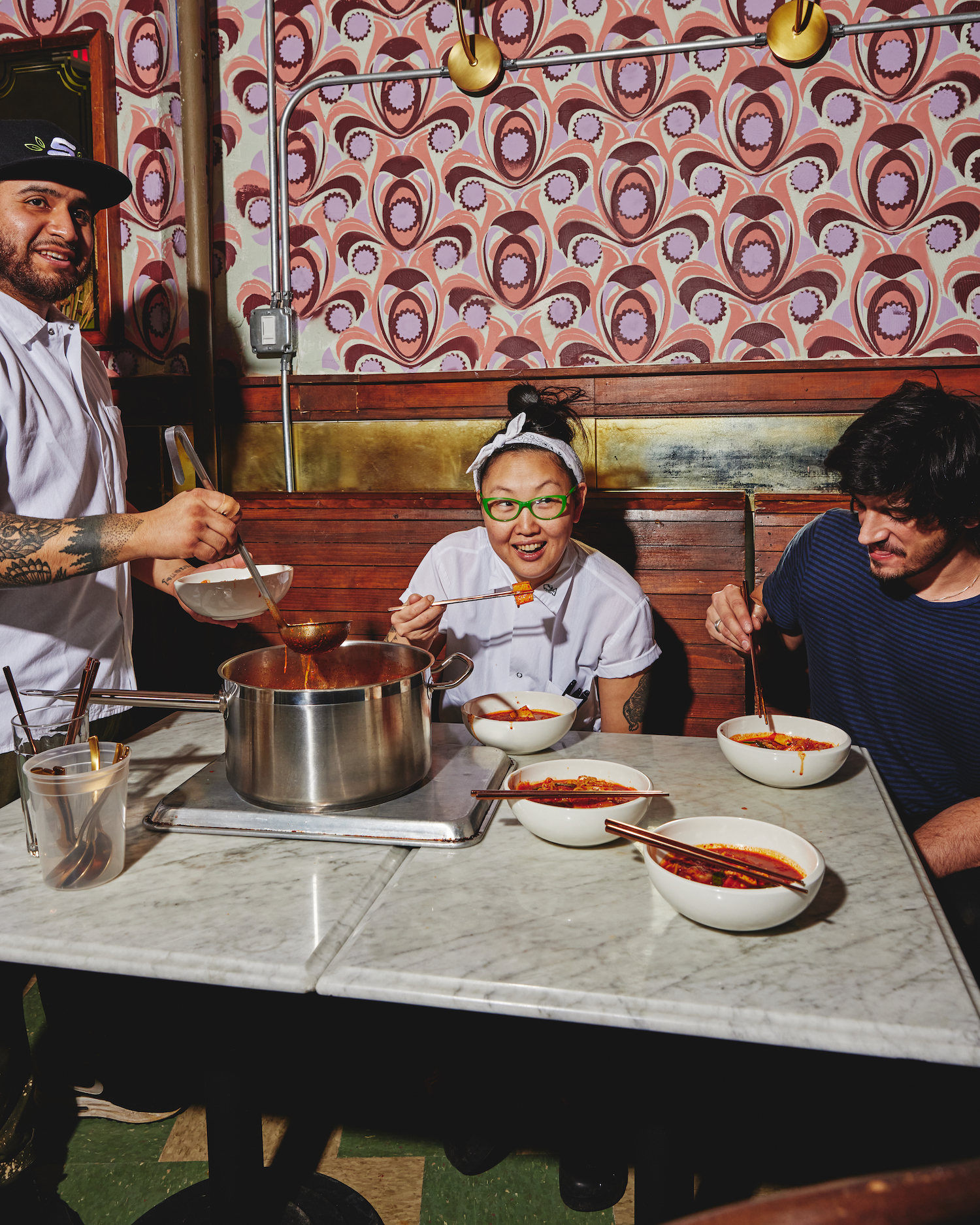 When I was a line cook at a Japanese ramen restaurant in Brooklyn, New York, a chef once tasked me with making chicken pot pie for family meal. I relished the assignment. I knew just how I was going to do it: exactly how my mother made it for my family growing up, with carrot, celery, onion, mushrooms, and peas; chicken boiled in an aromatic broth and picked off the bones; all combined in a gravy made with a simple roux and the stock from cooking the chicken, and covered with a homemade pie dough. (My mom rarely made it from scratch, but that was more a constraint of time, so no shade there!)

It was a favorite in our house, and I was excited to share my tradition with this new set of people with whom I’d formed a close-knit relationship. At that same restaurant, I realized one day that we had all the ingredients needed to make a version of kimchi-jjigae: chashu, ramen noodles, green onion, dashi, gochujang, gochugaru, and, of course, kimchi. Kimchi-jjigae was a dish I’d been introduced to later in life as part of my informal Korean education through food. It was a big hit and a recurring request from my fellow cooks. To this day, both dishes are still among my favorite things to cook, and they have found a place on the family meal table everywhere I’ve worked. At my restaurant now, we often have mortadella bits that we can’t use in our breakfast sandwich, so those make their way into my current iteration.

Family meals over the years have served as an informal education in other culinary techniques, flavor combinations, and cuisines. I remember a Thai-style green curry a sous chef I worked with made for family meal, and the combination of ingredients and the way he pureed the ginger, lemongrass, lime leaf, garlic, herbs, and chiles in the Vitamix was eye-opening.

As someone who had only ever been on the consumer side of that dish, I felt like I was peeking behind the magician’s curtain, suddenly in possession of culinary superpowers. Another cook I worked with once made okonomiyaki, a Japanese savory pancake typically consisting of flour, eggs, cabbage, Japanese mountain yam (nagaimo/yamaimo), and pork belly, topped with mayonnaise, okonomiyaki sauce, bonito flakes, dried seaweed, scallions, and pickled ginger. Watching her make each pancake and subsequently devouring one that night, I felt so spoiled, and for a few minutes before service, it was like I was a fortunate diner myself, enjoying the fruits of someone else’s talent and labor before the tables were turned and I had to get back on the line.

When I was given my first head chef position at Mission Chinese Food, I wanted to empower those who worked with me in the kitchen to explore their own creativity. I assigned them each one day a week when they would be responsible for making family meal, from planning to execution, giving them the opportunity to share a bit of themselves with the rest of the staff. I let them order special ingredients if they wanted, and I scheduled them to come in earlier to prepare, free from the regular pressures of service prep.

In doing so, I hoped that they would not only have some fun with food (because cooking should be fun!) but also experience the non-problematic aspects of what it could mean to have a familial workplace—being compensated fairly, being given the tools and resources to succeed, and receiving recognition for taking care of one another.

One cook brought in a treasured pocket-size cookbook he had gotten on a family trip to Thailand and made us all green papaya salad that was painstakingly prepared and full of flavor. Another cook made tamales from scratch and enlisted the help of the team, including me, to assemble them. They were heavenly to eat, and the community aspect of that family meal is one I’ll never forget.

This, more than anything, is what family meal should represent—community. Sure, we can exhaust the discourse over the word “family” and whether it should even be called “family meal” (it shouldn’t), but at the end of the day, if a restaurant staff is to function as a team in a productive, healthy, and positive way, the environment must be one in which everyone feels a sense of community. Fostering that sensibility in a restaurant can start with this time-honored tradition of a shared meal—but only if that meal is prepared by and for people who are given the tools, resources, and compensation to perform their jobs without the emotional baggage of a familial obligation to their employer and one another.

Kate Telfeyan is a New York-based chef, writer, and TASTE Cook In Residence.