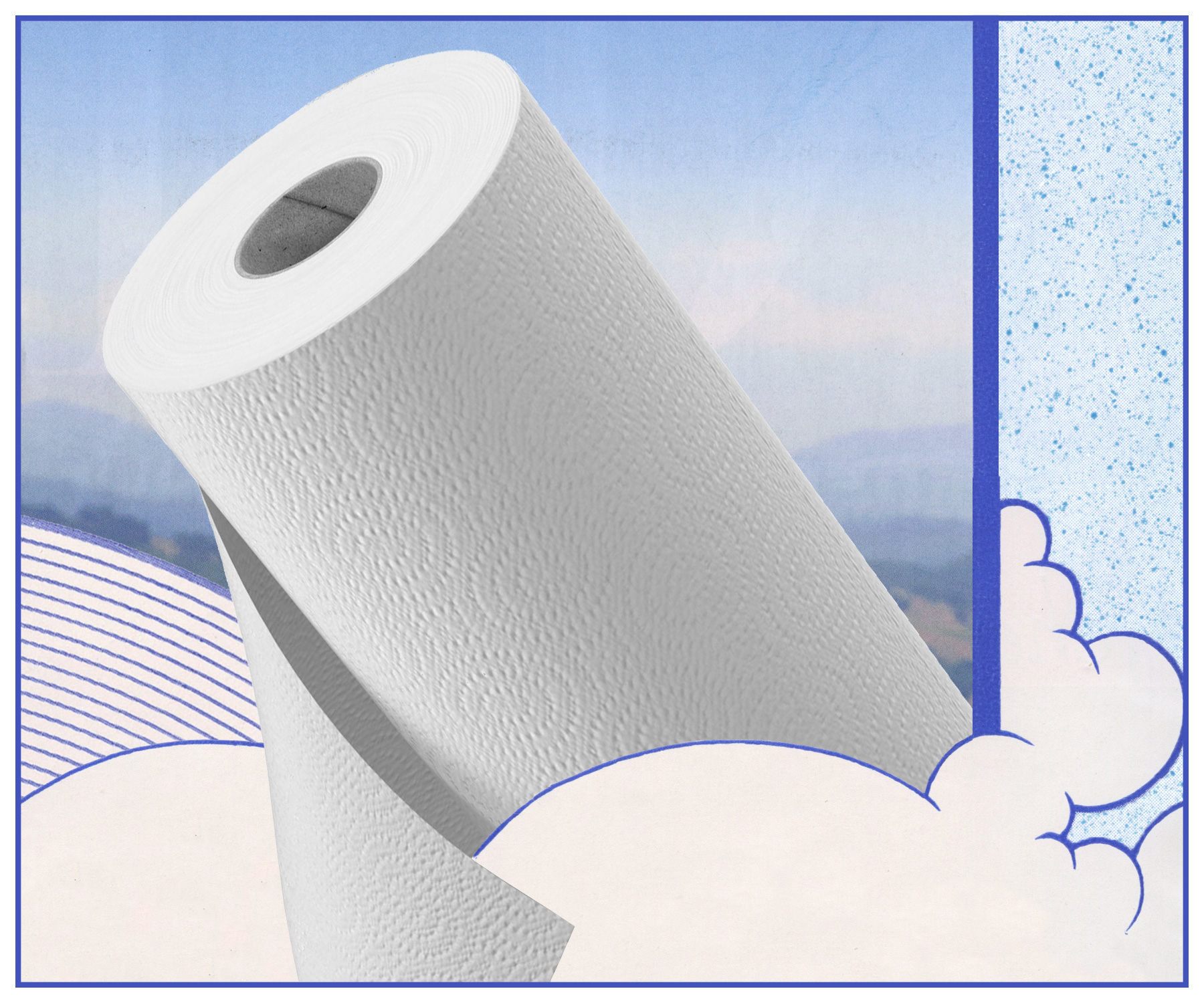 To some, paper towels are a symbol of waste. Ease over ecology. But for many, a roll in the kitchen is a requirement for smart home cooking.

In a kitchen with plenty of cheap, reusable rags to tackle almost every messy scenario, Samin Nosrat still relies on paper towels for one particular reason. “I keep a whole roll just for beets,” she says.

It’s a trick she picked up while working at Berkeley, California’s famed restaurant Chez Panisse. “The most expedient way to peel a beet is when it’s still warm out of the oven, you rub it with a rag or something,” Nosrat explains. “If you do it at just the right moment, when they’re still warm, the skin will really slip right off.”

The problem with using cloth rags is the bloody-colored beet juice, a notoriously difficult stain to remove from fabrics (even the esteemed Chez Panisse has laundry bills to think about!), not to mention one’s own bare hands. But with paper towels—reams of pulpy disposable tissues sold for as little as 99 cents at your local supermarket—the culinary crime scene is neatly contained and quickly tossed away. “The paper towel works also as a hand protector from how hot the beets might be,” she adds. “It’s like double duty, protecting your hands from heat and staining.”

“I like to treat them as a luxury, rather than an everyday necessity,” Nosrat says of paper towels. “But if it’s saving me the headache of having to do a load of laundry because there’s so much beet staining, then yes, gimme the paper towels.”

Paper towels have been saving people a lot of headaches and loads upon loads of laundry for the better part of a century now—and Americans are ripping through the rolls faster than ever. The average U.S. household uses 69 rolls every year, and the market is only getting bigger, up 30 percent over the last decade, according to industry tracker RISI.

For home cooks especially, paper towels come in handy in so many situations, from blotting moist raw meats and drying washed produce to absorbing grease from fried foods and wiping out hot pans. Die-hard devotees of cast-iron cookware, in particular, unravel innumerable rolls in constant pursuit of keeping their precious metal clean, properly seasoned, and unspoiled by soap. Busy people also benefit from the time-saving kitchen hacks that somehow always seem to require a paper towel, often a wet one. Wrap fresh corn or asparagus in a damp paper towel, stick it in the microwave, and you can have a hot dish in a matter of seconds. Forgot to chill the wine? No problem. Similarly, sheath the bottle in a wet paper towel and put it in the freezer for about 15 minutes. Voila! Salut!

Though endlessly useful, the disposable towels are also inherently wasteful. All that discarded paper adds ever more weight to the nation’s landfills and conscience. Mindful cooks will think twice before reflexively ripping off another Bounty sheet in the age of sustainability. But try all you want—the paper towel is too good at too many things to give it up completely.

Ask any avid cook—professional or otherwise—and chances are you’ll learn a good paper towel trick or two. In many instances, it’s not about mere convenience. It’s about technique. “It’s one of my go-to tools for good grill hygiene,” says Steven Raichlen, winner of five James Beard Awards for his cookbooks, including 2004’s BBQ USA. Raichlen prefers to begin every live-fire cooking session by folding a paper towel into a tight pad, which he grips with a pair of tongs, dips in oil, and then uses to wipe down and lube up the grill. “You’d be amazed at how much gunk comes off the grill when you do that,” Raichlen says.

“I’m religious about using them to hold down cutting boards,” says New York City chef Amanda Cohen, a James Beard finalist for her restaurant, Dirt Candy. “You lay a wet paper towel flat on the counter and put your cutting board on top of it so it doesn’t move while you chop.” Every time she makes stock, Cohen lines the strainer with paper towels because, she says, “no matter how clear you think your stock is, paper towels still catch things.”

An American invention, the paper towel has always been something of an improvisational tool. The Philadelphia-based Scott Paper Company is credited with producing the first paper towels back in 1907, basically by mistake. It began as an erroneously oversize batch of toilet paper, which was just too big for its intended purpose. So the company came up with other uses, first calling them “Sani-towels” and selling them to schools to help prevent the spread of colds.

Like other disposable paper products, such as cups and napkins, the paper towel arrived at an opportune time—the dawn of the germophobe. Growing awareness of bacteria around the turn of the 20th century would propel all kinds of advances in public hygiene and help to create the throwaway food culture that persists to this day.

The paper towel didn’t find its rightful place in the kitchen until 1931, when Scott first started selling its rolls in grocery stores. Before that, Americans mostly used regular cloth towels, so cooking at home required a lot more cleaning and sometimes questionable hygiene. “Cooks either did more laundry, or used paper towel precursors, such as the ubiquitous ‘paper’ that shows up in recipe collections at least from the mid-19th century, and probably earlier,” says culinary historian Cathy Kaufman, an adjunct professor at the New School in New York City. For instance, Catherine Beecher’s Treatise on Domestic Economics, published in 1841, recommends stocking every kitchen with “rolls of waste-paper and old linen and cotton.” For many middle- and upper-class U.S. households at the time, washing and ironing all those kitchen towels and napkins wasn’t really a big deal. They had hired help for that. Then came the war, and everything changed. “Around the time of World War II, it became more difficult to hire servants for home work because there were a lot of other kinds of work that young women could do,” says Megan J. Elias, the author of the history book Food in the United States, 1890–1945. “When a middle-class housewife has to learn to iron her own napkins, then she begins to think, ‘OK, this is a mug’s game. Gimme the paper towel.’” As a labor-saver, the paper towel would become very popular.

Over the years, it’s become an even better product: thicker, softer, and more absorbent, beginning with the 1965 debut of Bounty, the first two-ply roll and today’s industry standard. Manufacturers continue to tinker with the technology, right down to refining the individual cellulose fibers. Yet the main quality that made the paper towel attractive in the first place—its disposability—has now become its biggest detraction.

Some anti-waste activists would argue that the world would be better off without paper towels. “I believe paper towels are a symbol of a major modern dilemma: the lack of thought many of us give to where our food and other daily items come from, and what happens to them when we’re done with them,” says Eve Turow Paul, the author of 2015’s A Taste of Generation Yum. Paul stopped buying paper towels about three years ago as part of her effort to keep a “super low-waste household,” she says. “Why not just use a rag? Do we really need to use manufactured rolls of paper to clean up most messes?”

But completely switching back to old-fashioned cloth towels presents its own problems, like food safety. A 2015 study of consumers’ food-handling practices by Kansas State University found cloth towels to be the largest source of cross-contamination in the kitchen. Regular washing can reduce the risk of foodborne illness, but that also exhausts other resources, like electricity and water.

New York Times food writer and cookbook author Melissa Clark likens the dilemma to that of a new mother choosing between disposable and cloth diapers: “Is it worse to wash the rags or throw away the paper towels?” In her view, it really depends on the situation.

“I try to be very thoughtful about when I use my paper towels,” says Clark, adding that she only buys the recycled kind and composts the used ones whenever possible. (According to the Natural Resources Defense Council, if every U.S. household swapped just one regular virgin-paper roll for a recycled one, it would save more than 544,000 trees.)

“You have to use them for really disgusting things,” Clark admits. “Especially anything suspect, like raw chicken.” After chopping up poultry, Clark likes to spray vinegar on the cutting board and wipe it down with a paper towel before she washes it.

Clark also relies on paper towels to keep her leafy greens fresh. “You put a dry paper towel in the ziplock bag with your salad greens and it absorbs the excess moisture and it’ll keep for a week,” she says.

There are other techniques, too, that just work better with a paper towel, like removing the skins from charred peppers, Clark says. Sure, you could just rinse them off under a running faucet, but you’ll also wash away some of the juices, she warns. Rubbing the skins off with a paper towel helps to preserve more of those delicious juices. “It’s better for the flavor of the pepper,” she says.

An added plus: “You don’t get the little black bits under your fingernails.”

Chris Shott is an independent journalist based in Brooklyn. He was previously an editor at Thrillist, Food Republic, and Washington City Paper.