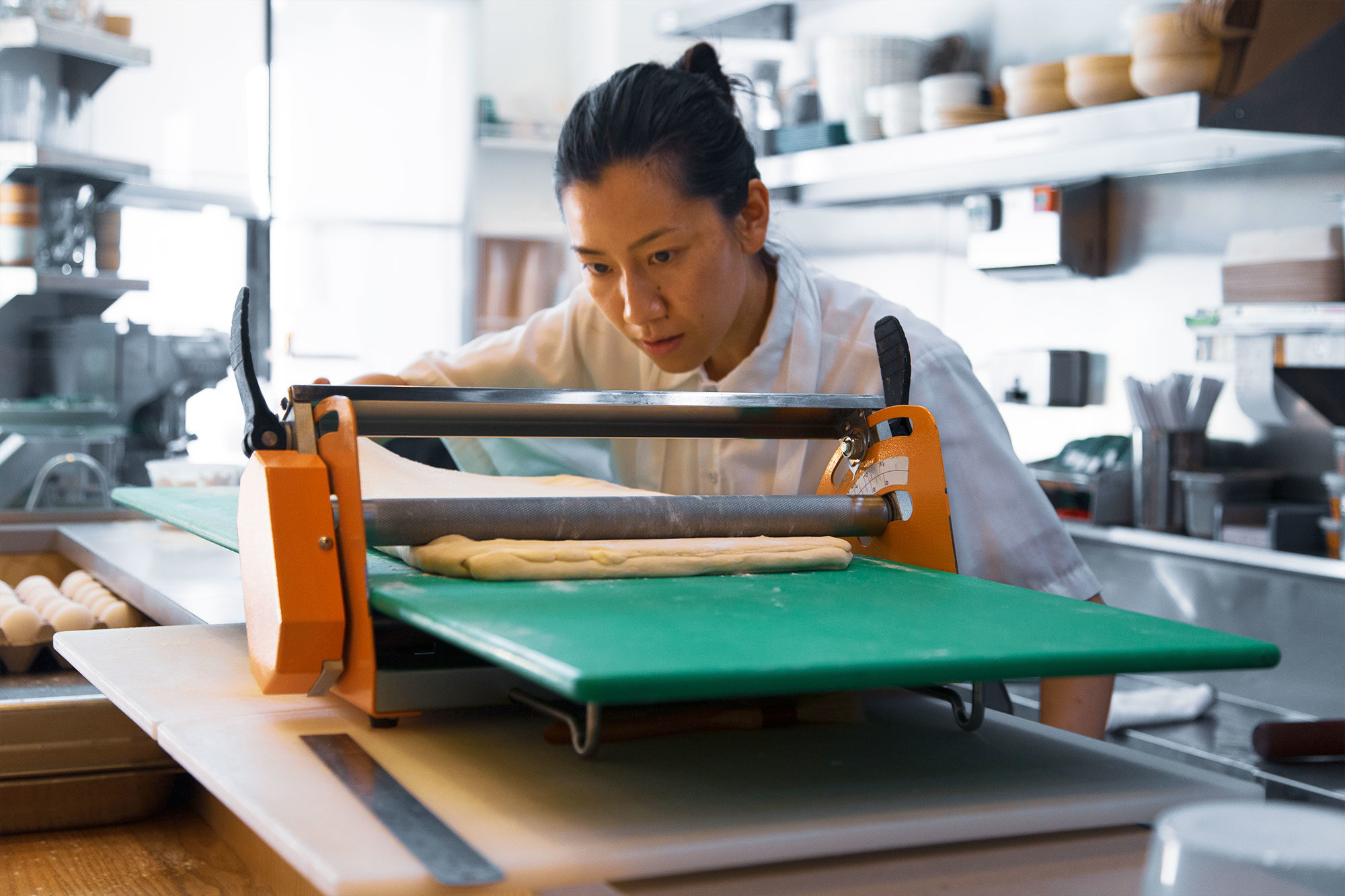 Two Los Angeles chefs sought pastry perfection and found it an hour’s drive outside of Tokyo.

It was during a research trip to Tokyo in 2017 that Akira Akuto and Nick Montgomery first encountered the machine. About the size of a home office printer and made from two hand-cranked stainless-steel rollers, it sat atop the pastry-filled counter of Path, a narrow shoebox of a restaurant in Tokyo’s Yoyogi neighborhood known for producing what Akuto and Montgomery, and various reputable critics, consider to be the most spectacular croissant in Japan: impossibly flaky and packed with more lip-glossing butterfat goodness than might seem physically possible in a baked good.

Akuto and Montgomery were still a year away from opening Konbi, their Japanese-inspired café and sandwich shop in Los Angeles, but after one bite of Path’s transcendent croissant, the wheels of inspiration started turning. “We had this very vague idea of what Konbi was going to be back then,” recalls Akuto. “We knew we wanted to do French pastries, but we didn’t know which ones. The biggest question was whether we could do it in a very small space.”

If the diminutive Path could pull off a stellar pastry program with limited square footage—about a thousand square feet—why not Konbi? Akuto struck up a friendship with the shop’s pâtissier, Yuichi Goto, who schooled him about the mysterious machine on the counter: It was a slab roller, a compact tool used by ceramicists to press out even sheets of clay. Turns out it was ideal for rolling the sheets of laminated croissant dough, too. It’s probably worth pointing out here that making a great croissant is an exceptional pain in the ass, a reality blunted by the fact that you can find inferior versions everywhere from train terminals and airports to hospital cafeterias and Burger King’s Croissan’wich. A great croissant, though, involves a borderline obscene amount of high-quality butter folded repeatedly between whisper-thin layers of dough, ideally done fast enough that the butter stays cold and firm. And while it’s technically true that great croissants can (and are) rolled out by hand, from a professional point of view, that would be like your contractor telling you that all he needs to build your dream house is two-by-fours and a handful of nails.

Most pâtissiers, even the really old-school ones in Paris, use hulking golf-cart-size machines called dough sheeters to laminate their croissant dough. This allows them to make a multiple of great croissants at once—up to 26 pounds of dough in an hour—and thus run an economically feasible business. But not everyone has room for a golf cart in their kitchen. This was what made Path’s repurposing of the ceramic slab roller so clutch, and why Akuto and Montgomery so quickly recognized its potential. “It’s designed perfectly for what it does, but at the same time, you can only fit so much dough,” says Akuto. “If we were running a bakery, it would make zero sense, but the consistency and compactness is exactly what you need if you have a restaurant with a small footprint.” At Konbi, pastry chef Jen Yee (who, fittingly, took ceramics classes in college) uses a pale orange hand-powered slab roller that Akuto had mailed from Japan to roll out enough dough for three to four dozen croissants each day. There’s simply not enough room to store more dough, so availability is limited. But that limited availability has its perks. Arrive in the morning—Konbi opens at 8 a.m., often to a patient line—and you’ll be treated to a croissant that’s warm from the oven, a life-affirming experience that Akuto says is rare even in France.

Between the high cost of fancy butter (Konbi uses the highly touted stuff from Isigny Sainte-Mère in Normandy) and the labor-intensive, three-hour process of laminating the dough each day, Akuto says Konbi makes very little money on each croissant, which sells for $5. But they continue to make them anyway, because great croissants are awesome. “It’s a magic item,” says Akuto. “Whenever I eat one, I’m thinking to myself, ‘This is amazing,’ and even then, I only eat the ones that are visually messed up.” (He admits to a habit of eating two to three a week, down from seven to nine [!!] when Konbi first opened.)

In the eleven months since Konbi opened, the quiet gospel of the ceramic croissant roller has spread from Path to Konbi to other parts of the restaurant world. Neighborhood café Mokonuts in Paris uses one, and so does New York’s Té Company. Former Path pastry chef Rihito Maruhashi, who helped consult on the baking program at Konbi, is now making croissants at Lyle’s in London. A few months ago, Akuto hand-delivered a slab roller to Tribeca restaurant Frenchette at the request of chef Riad Nasr, who had begun offering a handful of croissants during brunch service. “He didn’t have room for a sheeter, so they were rolling out croissants by hand in the basement, where it’s 105 degrees in the middle of July,” says Akuto. “I told them they were out of their minds.” Based on the popularity of Konbi’s croissant, Akuto says he’s received more than a few requests from fellow chefs asking about “the machine that makes the croissant.” Yet he’s hesitant to give up his supplier in Tokyo—which he only describes as an out-of-the-way shop that specializes in pottery supplies; instead, for a $1,500 fee that covers the cost of the machine and international shipping, he’ll have one sent to L.A. and then deliver the final leg himself.

“It’s easier than explaining to each chef where the shop is, how to order and all that, especially if they don’t speak Japanese,” says Akuto. “We did all the work to figure out the logistics, so if you need one, you can just pay us. It doesn’t make much money for us, but it’s a fun business to be in.” So $1,500 for what is basically a glorified pasta machine? It might seem steep for the home baker, but for pastry chefs with carpal tunnel, it’s a justifiable expense. Plus, Akuto says, this roller is built to last. “It’s sturdy; it’s made of welded steel,” he says. “One will last you forever.”

But if there’s one caveat that the new ambassador of small-batch, luxuriant croissants makes clear to any interested parties, it’s that this nifty machine is just a tool, with all the limitations that implies. “There’s never going to be a shortcut to making croissants—it’s still crazy difficult,” Akuto admits. “The guys from Path taught us, but they didn’t teach us everything. There was plenty of failure to get to where we are now.”

In one sense, it’s a metaphor for how social media and the internet writ large have transformed the culinary profession. Cooks have more access to technical information than ever before, and techniques or equipment that might have once existed in relative obscurity—like, say, using a ceramic slab roller—can spread like wildfire across DM threads. But in the end, Akuto says, no matter how cool or innovative, these things will only get you so far. “The most important part for us was the trial and error and slowly figuring it out. That’s so much of cooking,” he says. “And no one else can do it for you.”

Garrett Snyder is a food writer based in Los Angeles, and the co-author the upcoming Night + Market cookbook. His work has appeared in publications such as the Los Angeles Times, LA Weekly, Los Angeles magazine, GQ, Thrillist, PUNCH, and Tasting Table.