Get a free recipe
Subscribe
Kelly Fields Has a Biscuit for That
By: Kaitlin Bray 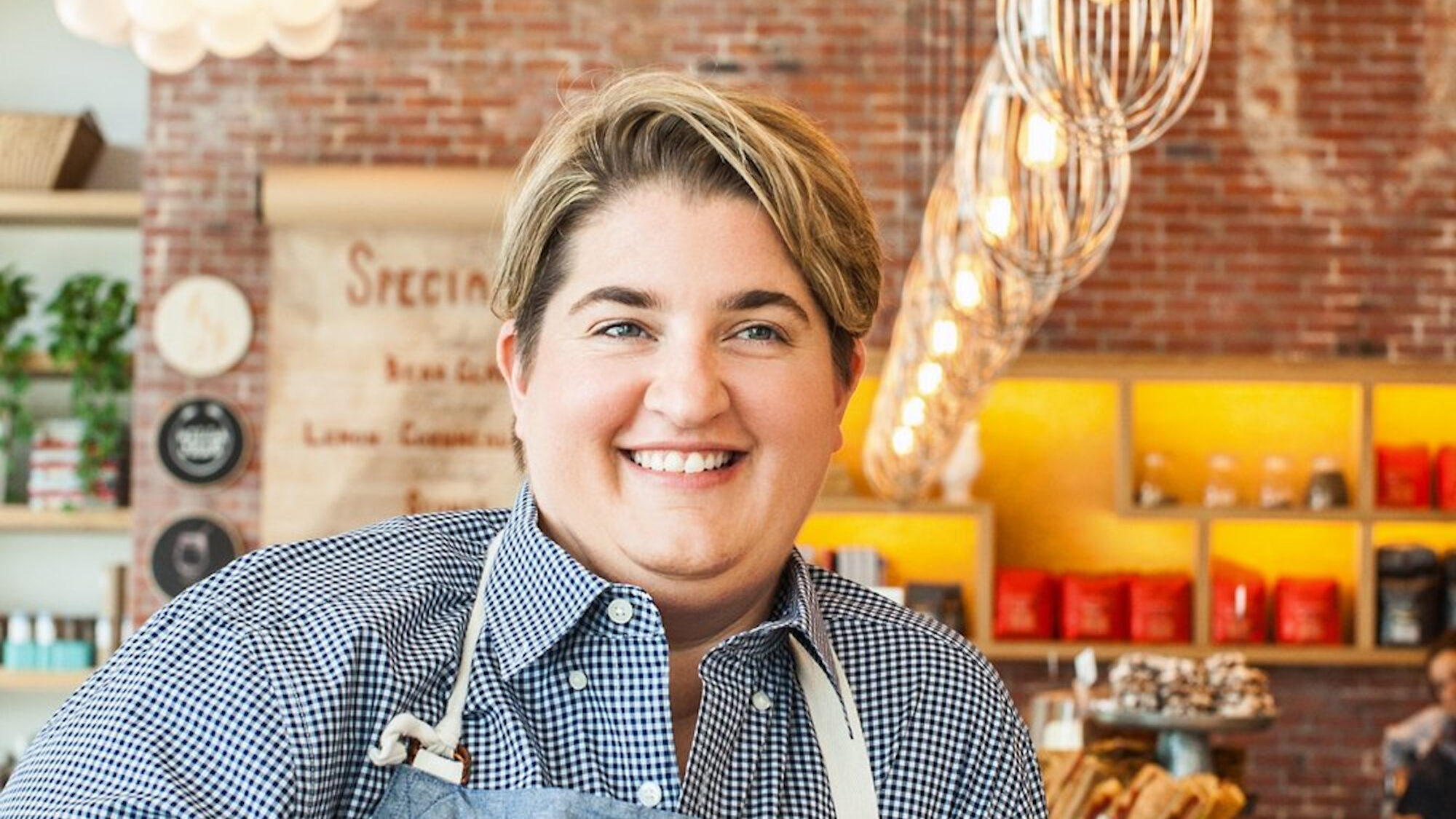 If you visit New Orleans, there’s a very good chance you’ll find yourself gazing into the glowing pastry case at Willa Jean, the James Beard Award–winning South Market District neighborhood restaurant run by Kelly Fields. Between the golden biscuits, flaky fruit Danishes, and salty chocolate chip cookies, it’s nearly impossible to order just a coffee. Named after Fields’s grandmother, Willa Jean has been drawing crowds and national acclaim since opening its doors in 2015. While the lines are shorter these days—the restaurant is operating at 50 percent capacity, in accordance with city guidelines—and getting to New Orleans as a tourist may prove difficult, you can now re-create some of the restaurant’s beloved baked goods at home, thanks to The Good Book of Southern Baking: A Revival of Biscuits, Cakes, and Cornbread.

After losing her notebooks in Hurricane Katrina, she worked from muscle memory to re-create years of lost recipes. This cookbook, a warm and playful love letter to Southern baking, is also instructive and deeply researched, the result of years of testing and refining recipes. Her chocolate chip cookie, one of the most popular items at Willa Jean, famously took more than two and a half years to develop. Despite the intensity Fields brings to the recipe development process, above all, she just wants bakers to relax and have fun in the kitchen—oh, and to stop comparing their pies to the ones on Instagram.

We recently hopped on Zoom to talk about why she included six(!) biscuit recipes in the book, why white chocolate makes a number of cameos inside, and her best advice for nervous Thanksgiving pie makers.

How are you doing? How is Willa Jean doing? Have you found creative ways to stay afloat, both personally and financially, during this challenging time?
“Staying afloat” is a funny word. Financially, no, but personally, you know, coming back. There’s a lot of grief, of letting go of the idea of how things were and what it’s supposed to be. We’re learning how to care for ourselves in new ways, and for each other in new ways—the financial part, hopefully, will come behind that. I think New Orleanians do a really phenomenal job of hunkering down and doing what they need to do—even though this is a storm that we don’t know how to prepare for or how to respond to in a way that we’re used to as a community.

Does it feel like people in New Orleans are ready to go out again?
I think the bulk of the people who are coming to the restaurant are from out of town. I see a lot of people posting on social media about Bourbon Street being packed with people who are not wearing masks.

And getting to your new book, The Good Book of Southern Baking is absolutely incredible. You have five biscuit recipes in it. How did you decide you needed to include them all?
I actually snuck another one in there at the last minute. There’s a dog biscuit in there now. I kept hearing that people who are not from the South don’t necessarily think of biscuits as Southern baking. I also learned that a lot of people don’t put biscuits in a baking category; they put them in a savory category. I wanted to make a very clear statement that biscuits are, in fact, a big part of Southern baking, and there are a lot of different ways you can make them. My editor was fully on board.

Is there one biscuit that’s your go-to or that you’d recommend people start with?
I’d suggest starting with the drop biscuit or the rolled biscuit. They’re the easiest ones. The Baker’s Biscuit, the one on the cover, is the most technical biscuit, but I think the key is to just make biscuits and not overthink it. You have to make a lot of biscuits to get good biscuits. Don’t be afraid of them. You’ll be fine.

I noticed that the Baker’s Biscuit is made with Italian-style 00 flour. I’ve never seen that before.
I was working with a guy named Mike Carmody, who is an extraordinary baker, and we were talking about our favorite things about biscuits and baked goods. I love laminated doughs, like croissants and Danishes, but it’s really hard to get a tender, soft, fluffy biscuit using lamination techniques. I learned from Mike that Italian-style 00 flour is milled so fine and has such a low protein content that you can add that extra step of folding and re-rolling without building up a large amount of gluten, which is what makes a biscuit really chewy and hard.

Two New Orleans–specific ingredients, Creole cream cheese and Poirier’s Cane Syrup, are featured in the book. How would you describe these ingredients to people who are unfamiliar with them?
Creole cream cheese is like if ricotta and burrata got together and had a baby that was a little bit more on the tart side. There’s a local dairy here that sells Creole cream cheese, but I also have a recipe in the book for how to make it. If you’re in a rush and don’t have the time or the patience, ricotta or mascarpone is a good substitute. I like to refer to Poirier’s Cane Syrup as liquid gold. It is so special. There’s a man right outside of Lafayette, Louisiana, named Charles, who grows all the sugar cane in his backyard. It goes from the ground to a bottle in like 48 hours. It’s so fresh, buttery, and nuanced. Fortunately, it’s available to buy online. I always try to buy about 75 percent of what he makes.

What do you like to use it on?
Everything! In the restaurant, we serve it with corn bread, but I literally put it on everything. I dip bacon and sausage in it. I put it on eggs. I love it.

Thanksgiving is around the corner, and while it’s definitely going to look very different this year, I’m sure that people are still going to be making pies. Do you have any tips for nervous pie makers?
If you feel nervous, it’s never too early to start stocking your freezer with dough. The ultimate rule for baking pies is to not be intimidated by what you’re doing. It’s just baking. It might not look like the most perfect thing you saw on Pinterest or Instagram, but it’s likely going to be very delicious, and that’s all that really matters. Even as a professional, I was intimidated by pies for a very long time. But you have to remember—I’m going to say this out loud, just ’cause I’m a big advocate for it—most of the pies that you see online that are super intricate are not baked. They’re not baked, because everything changes in the oven, and it does not look that good when it comes out.

Is there a pie that you always make for Thanksgiving? I saw that you’re not a fan of pumpkin.
I don’t love it. I never have. I always make chocolate pecan pie and another pie that’s not in the book—maybe it will be in another book, if they let me write one—which is a banana peanut butter cream pie.

Have you always known you wanted to write a cookbook?
I mean, no, you kind of build a foundation of recipes [first], but the idea of this book started when Katrina hit and I lost all my notebooks. I went out and bought a notebook, and I wrote down every recipe I could think of, but I never thought that I would write a cookbook. Even when a literary agent took me to lunch and told me all the reasons I should write a book and all the books I could write, I still couldn’t believe it. I really like baking, and I’ve baked in the South my entire life, and I love it, but I have imposter syndrome, too. I wrote a love letter to Southern baking.

Your chocolate chip cookies are pretty legendary, and it seems like a lot of work went into perfecting them. What were you seeking in your quintessential chocolate chip cookie?
It started as a little exercise for me to get back to my roots and really remember the simple fundamentals of baking, because I had been doing high-end fine dining food for so long. I started talking to people—friends, coworkers, strangers—and gathering opinions on what makes a chocolate chip cookie great. Most people know they like chocolate chip cookies, but they don’t know exactly what they love about them. The goal was to make a cookie that touches on each of the characteristics people seek out. I made cookies daily for about two and a half years. I really learned what each step of the process does and how every ingredient interacts with each other. I adjusted one little thing at a time to figure it out. I really nerded out.

What’s one recipe that you think might fly under the radar because it’s not super flashy or Instagram-friendly, but is deserving of love?
The chocolate pudding recipe. It’s just brown, but it is the most delicious chocolate pudding on Planet Earth, in my opinion.

On it! What are your friends’ most frequent requests?
Most people ask for banana pudding or my mom’s cobbler, which is also the easiest recipe in the book. If you’re scared of baking, start with my mom’s cobbler—it’s embarrassing how easy it is to get right. 4 RECIPES WE LOVE FROM THE GOOD BOOK OF SOUTHERN BAKING

The Baker’s Biscuits
There’s a reason this biscuit has literally been put on a pedestal on the cookbook cover. They’re golden, flakey, and best served with a dollop of jam, sausage gravy, or with fried chicken and hot honey.

Warm Chocolate Pudding
This chocolate pudding won’t win any beauty awards, but you won’t care about that when you’re spoon-deep in your second serving.

Pumpkin Pie with Roasted White Chocolate Cream
If you know someone who thinks they don’t like pumpkin pie or white chocolate, show them the light with this pie.

Last week, we talked to Hawa Hassan about her new book, In Bibi’s Kitchen, which looks at the food of eight African countries united by their spice trade with grandmothers defining their own cuisines.

Hugh Acheson’s new book, How to Cook, may be targeted to teens, but folks of all ages will appreciate its approachable format to teaching the foundations of cooking and his warm, fatherly advice.

Did you catch our interview with Yotam Ottolenghi and Ixta Belfrage? It’ll have you thinking about celery root in a whole new way.

The Essential Wine Book is exactly what it sounds like, essential. Zachary Sussman’s field guide to the new world of wine covers everything from today’s most exciting regions to easy-to-use advice on finding the perfect bottle for any occasion. Snag a digital or print copy of Whetstone Magazine’s fall issue. Vol. 006 covers a wide array of food origin stories, from home cooking in Kyrgyzstan to a fight for biodiverse avocados in Mexico.