Get a free recipe
Subscribe
Kaya Is More Than a Toast Topping
By: Clarissa Wei Photos: Jeslyn Chow 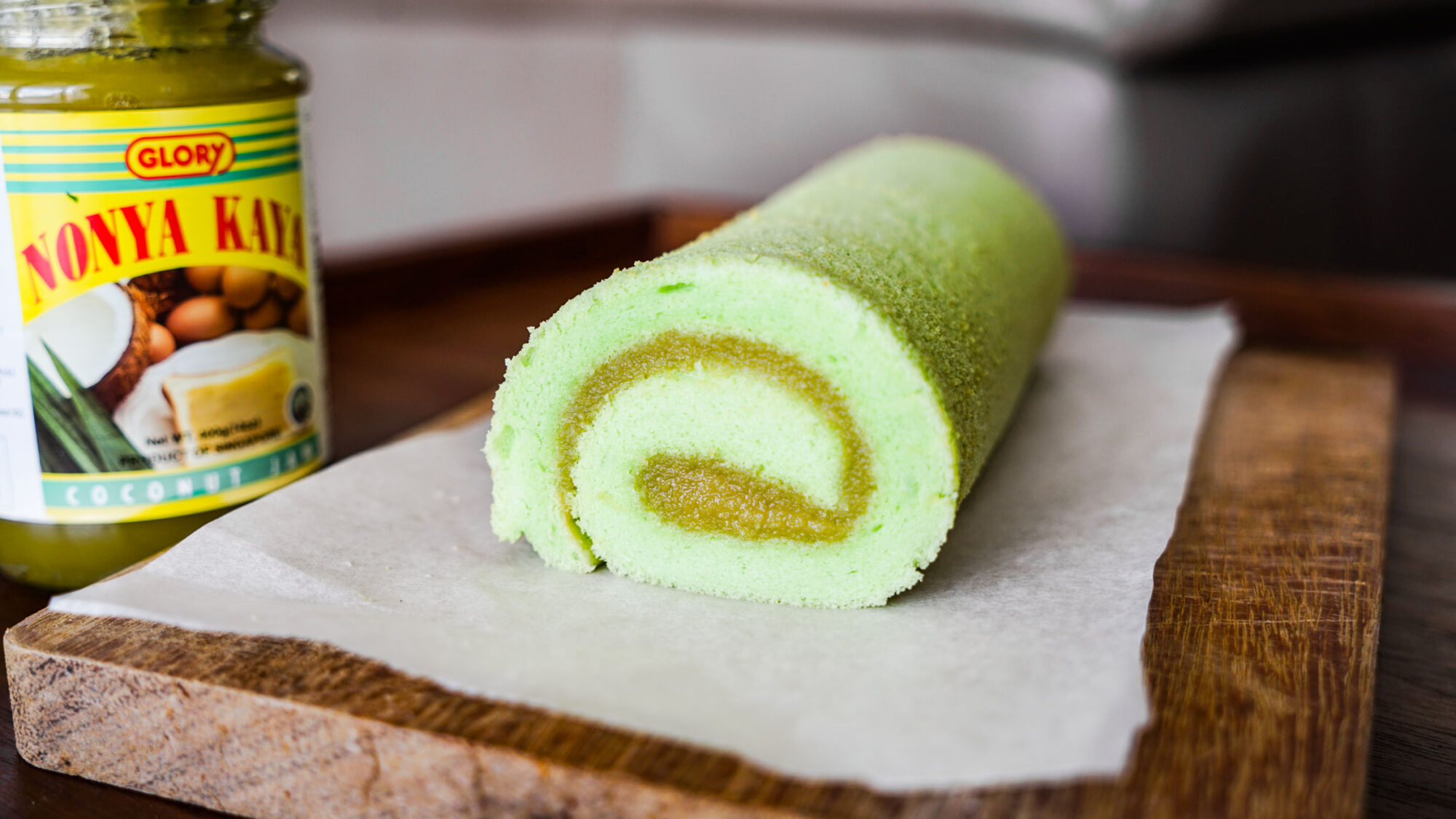 The sweet, custardy spread isn’t just a signature of Southeast Asian coffee shops—it’s an ice cream base, a cake filling, and an accompaniment for cheese.

In Malaysia and Singapore, kaya, a sweet coconut jam, is most commonly slathered on crustless white toast, sandwiched in with a thick slab of cold salted butter, and eaten for breakfast alongside a big mug of strong black coffee with evaporated milk and sugar. It’s a unique contrast of textures and temperatures—warm, toasted bread married with the cool saltiness of butter, all in sync with the sticky, sweet, and profound nuttiness of the spread.

It might be tempting to pigeonhole kaya as the approximation of the jam that accompanies British teatime, swapping in fresh coconut for strawberries or raspberries. But in reality, the condiment has hundreds of years of history in Southeast Asia and is very much its own foundational ingredient. For centuries, its nutty flavor has been channeled into countless dishes and confectioneries by pastry chefs and home cooks around the world.

A proper kaya only needs three ingredients to work—coconut, egg, and sugar—and it can manifest itself into anything from a light, bouncy custard to a dense, peanut butter–like paste. Add in pandan leaf—an ingredient exclusive to the tropics—to give it a bright jadeite hue with aromatic hints of vanilla and hazelnut, or enhance the blue tones of the jam with butterfly pea, a stunning edible flower. Throw in a hint of saffron for warmer shades of orange and yellow, or skip the enhancements altogether.

“It’s basically a custard,” says Janice Wong, founder of 2am: dessertbar in Singapore, who uses kaya to flavor ice cream. “So any recipe that calls for a custard, you can essentially replace it with kaya, and it would work.”

“I love eating kaya with peanut butter,” says Lim Tian Wee, an artisanal kaya jam manufacturer in Singapore who also recommends pairing it with brie on bread. “The milk fats of cheese cut through the sweetness of kaya, and the brininess of cheese balances out the sweetness.” At his company Ujong Gourmet, Lim makes (and ships internationally) three types of kaya: one with pandan, one with saffron, and a plain one that’s sweetened with coconut nectar instead of sugar.

“I once made a White Russian with vodka, cream, and pandan kaya.”

Kaya isn’t limited to eating with bread, of course. Auria Abraham of Brooklyn-based condiment line Auria’s Malaysian Kitchen says she’s experimented with the jam in cocktails and in yogurt. “I once made a White Russian with vodka, cream, and pandan kaya,” she says of the cocktail.

Abraham also likes layering kaya into parfait. Her ingredients? Greek yogurt, salted caramel kaya, coconut milk chia pudding, granola, and then another layer of yogurt. “People lost their marbles over it,” she says. “I top it with raspberries. It’s super tasty.”

But some of the most interesting uses of kaya that she’s seen have actually come from her customers, many of whom do not have a history of working with the ingredient and are drawn to cooking with it because of its fragrance.

“One customer of mine bought kaya from my website and told me that he put it in a chicken stew and it tasted great,” she says. “Getting an ingredient and not knowing what to do with it is sometimes a good thing, because it leads to creativity.”

The history of kaya goes back to the 16th century, with uses passed down in the cultures of Singapore, Brunei, Indonesia, Malaysia, the Philippines, Vietnam, and Thailand. “Historians think that it’s probably a product of Portuguese culinary colonial influences in Asia, and they’re well known for desserts with eggs, and then someone here thought, let’s do something with lots of eggs,” says food writer and cookbook author Christopher Tan. “Dairy milk isn’t too common here, so we use coconut milk instead.”

Though most people these days use kaya as a spread or to accent a dessert, it was traditionally steamed until firm and eaten by itself, as it still is in many parts of Southeast Asia. “In various regions in Indonesia, they steam it in little cups, and you have it by itself with a spoon,” explains Tan. In Thailand, it’s sometimes steamed inside of a hollowed-out pumpkin. Among Peranakans—an ethnic group of mixed Chinese and Southeast Asian heritage in Indonesia—kaya is steamed for so long that it can be turned upside down, and even sliced like a cake.

“The idea of kaya being a spread for bread is something that belongs to the 20th century,” says Tan. Immigrants from the island of Hainan in China came to Southeast Asia during that era and opened coffee shops—or kopitiams—in Malaysia and Singapore. “Somewhere along the way, the Hainanese picked up the art of making kaya and started to serve it as a spread on bread with the coffee,” says Tan. Their varieties of kaya are heavier on the egg, more golden brown, and have a paste-like consistency.

Many of these Hainanese immigrants had worked onboard British ships and created kaya toast as a nod to the British afternoon tea culture. Several areas of Southeast Asia—including Singapore, Malaysia, and Brunei—were also part of the Commonwealth. “The British came and brought their culture of teatime and sandwiches. And because people here couldn’t afford berry jams, they made their own coconut jam,” says Lim.

What was originally a poor man’s knockoff of fruit jam is now an iconic part of the tropical Southeast—a rich spread with centuries of history and dozens of regional variants.

Kaya can be readily found in most Asian specialty stores in the West, though many of its regional variants are not available outside their places of origin. “If you find it in a supermarket in a jar, it has probably been optimized for bread or toast,” says Tan.

But if you can’t find the condiment in grocery stores around you, it’s quite easy to make at home, as long as you can get your hands on coconut milk. The general gist is this: combine sugar, eggs, and coconut milk at a controlled heat so that the egg doesn’t curdle, and thicken the mixture until it has a jam-like consistency. But even within these parameters, recipes vary wildly. Some people swear by egg yolks instead of whole eggs, coconut cream instead of coconut milk, or palm sugar instead of superfine white sugar. It’s all a matter of preference. “The foundation of kaya is coconut,” stresses Lim, who likes to swap in coconut sugar as the sweetener.

For Tan, his tip for balancing out the cloying sweetness of kaya is a bit of salt, or to use palm sugar instead of regular sugar, because the former has an underlying savory element to it. “You have to remember that, three hundred years ago, there was no such thing as food preservatives or refrigerators,” he says. “So the only way to make it keep was to make it very rich and very sweet.”

A lot has changed within those years, and kaya has evolved from a colonial-era condiment into a uniquely Southeast Asian pantry staple. What was originally a poor man’s knockoff of fruit jam is now an iconic part of the tropical Southeast—a rich spread with centuries of history and dozens of regional variants.

“Kaya was originally inspired by the West,” says Lim, who hopes that kaya will eventually make the jump from being an esoteric ingredient relegated to Asian specialty markets in the Western world to becoming a much more universal pantry item. “I want kaya to evolve into something bigger, something that Asia can bring to the world.”