Get a free recipe
Subscribe
Joe Beef Is Cooking for the End of the World
By: Deborah Reid 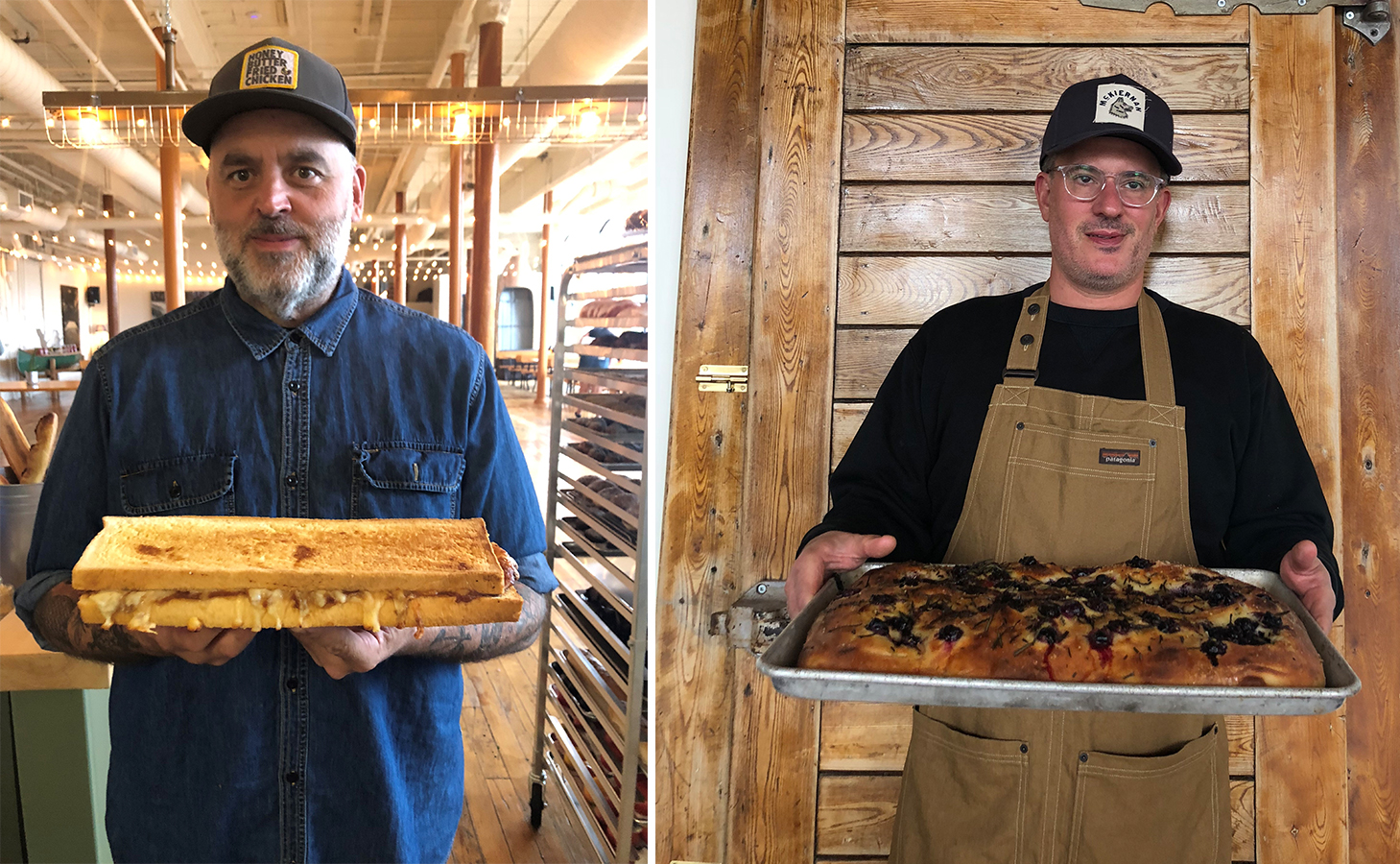 Like the first Joe Beef cookbook, Joe Beef: Surviving the Apocalypse defies easy categorization. But one thing is certain: It’s very much a reflection of our times.

Imagine this: While wandering in the post-apocalyptic world of Cormac McCarthy’s The Road, you spy a root cellar door and the promise of shelter. Hinges creak as you tug open the wooden doors and take a few steps down into a musky earthen cavern. You fumble in the dark, searching for the string hanging from a bare light bulb. It snaps to life, and you’re stunned to discover a survivalist stockpile—crocks of salted ham hocks and sauerkraut, jars of pickled tongue and sweet crab apple cordial. Later you’ll breathe in the medicinal twang of ginseng as steam rises from a meaty broth, and scoop spoonfuls of shredded beef shank, soft navy beans, and the caramel rubble of disintegrating dates. Pungent mizuna greens and a lick of mustard oil bring you back to your senses. Outside, the world careens to an end, but inside, you enjoy a fantastical and sensual feast.

It is through a spectacular photo spread of this root cellar that we enter Joe Beef: Surviving the Apocalypse, the second cookbook from David McMillan (pictured above left) and Fred Morin, the chef-owners of Joe Beef. It’s a theatrical book that in some ways mimics what it’s like to step into the celebrated restaurant on Rue Notre Dame in Montreal’s Little Burgundy. You walk into a warm and convivial environment and slough off the harshness of the outside world along with your jacket. As you slide across a red leather banquette, you surrender to the care and guidance of two extraordinary proprietors. There are few restaurants like Joe Beef on the planet; between the bon vivant atmosphere and the hearty, unpretentious French cooking, its closest competitors are the ancient bouchons of Lyon. “Everything—the music, the food, the drinks—is about Fred and me,” says McMillan. An apocalyptic mood board from a new book from Joe Beef

The pair are purveyors of a rare and, according to McMillan, endangered tradition. In a working-class neighborhood in the city’s west end, they’ve crafted an enduring presence by blending classic French cuisine and Quebecois culture with the ingredients of the surrounding region. Early on, their approach won them the attention of chefs like David Chang and Anthony Bourdain, whose presence and approval made Joe Beef a must-visit. But maintaining tradition—in terms of cooking, local culture, and hospitality—has remained their priority, even as they’ve opened five restaurants and penned two cookbooks. They tend to it with a kind of religious fervor; it is, according to McMillan, “the most categorically important thing in our careers.”

The second cookbook, like their first, The Art of Living According to Joe Beef, published in 2011, defies categorization. It’s a quirky, charming culinary journal of sorts with recipes. “Even we don’t know how to classify it,” McMillan admits. “Some people want to put it in the apocalypse section,” he jokes. There are photos of family, beloved friends, and employees, recipes from their restaurants, and thoughtfully written interludes on wildly diverse topics like “A Note on the Seventies’ Health Food Store,” and “Are You There God, It’s Me, David,” an elegy to the wines of Burgundy. In his back-cover endorsement, Bourdain christened McMillan and Morin “the rogue princes of Canadian cuisine.” “I understand Tony’s point: A lot of Americans see Canada as a thing,” McMillan says. “Our scope is much smaller—we’re the rogue princes of this neighborhood.” Given their fierce pride in their Quebecois roots, it’s no surprise that the pair shrug off the nationalist sentiment. When they look outward, it’s toward a more immediate horizon. “We cook with the ingredients of the Atlantic Northeast,” says McMillan. “The Canadian cuisine of the Gulf of St. Lawrence and the saltwater coast of Maine and Massachusetts.” Joe Beef’s chalkboard menu changes often, but it always includes oysters, a crisp, golden croquette of smoked meat or fish, and the classic lobster spaghetti for two.

The province’s long French history made an early mark on McMillan and Morin, who grew up watching great Quebecois cooks like Mme Jehane Benoit on after-school television. In the cookbook, the Hamburger “Catalina” recipe, a plain burger bathed, bun and all, in a buttery tomato-and-marjoram emulsion, is a heavenly throwback to a dish from a French Canadian cassé-croute, or snack bar.

As young apprentices, the duo worked in kitchens during the late ’80s and ’90s, when chefs like Alain Chapel and Paul Bocuse ruled the stove, and that influence is writ large in their recipes. What makes their French cooking so unique and special, besides the occasional infusion of self-effacing, tongue-in-cheek humor, is the ease with which they straddle both the old and new worlds. That crossover flavors the L’Absorbine Junior, a mint-spiked cocktail named after the pain-relieving liniment, and the VGE Consommé (a dish synonymous with Paul Bocuse), which McMillan and Morin make from canned soup, truffles, and foie gras and describe as “a soul-warming preamble to a main course of cyanide capsules.”

When he’s asked if this kind of cooking, with its rich sauces and meaty dishes for two, is dated or even “over,” McMillan’s reply is both animated and profane. “This form of cooking is in danger,” he says, and then repeats it for emphasis. “Instagram is a great homogenator where you find people cooking Nordic cuisine in Jalisco state in fucking Mexico. I struggle with young chefs who want to cook this generic, modern-world, Instagram cuisine based on trend. To cook this neighborhood at this time and place is super important, and it’s fucking hard.”

The singularity and confidence with which McMillan and Morin practice their craft is a big part of Joe Beef’s attraction. They have legions of faithful customers, to whom McMillan is quick to credit his success: “We work at this wonderful restaurant and cook whatever the fuck we want—kidneys, brain, tongue—because we have an insatiable, amazing dining public.” McMillan and Morin have cooked together for 30 years, and there’s a brotherly bond between them. It’s evident there’s elbow room within their partnership for each to pursue their interests, which include spending more time with their families. McMillan makes Cardinal Peaches for his three girls at his secret lake getaway, ladling red raspberry puree over canned fruit and finishing it with an acrylic white glug of canned Carnation extra-thick cream. Morin, meanwhile, hosts sumptuous Sunday-night dinners at home where everyone gets dressed up and eats dishes like a lobster stew inspired by the Parisian chef Bernard Pacaud, Civet de Homard au Calvados, complete with a garnish of apples and lardons and a lobster reduction enriched with crème fraîche.

Instagram is a great homogenator where you find people cooking Nordic cuisine in Jalisco state in fucking Mexico. I struggle with young chefs who want to cook this generic, modern-world, Instagram cuisine based on trend.

But it’s pure magic when the two join forces to create wildly extravagant recipes like Muffuletta à la Maïté, an intense sandwich made of layers of jambon blanc, foie gras, shaved truffles, and headcheese, among other ingredients. If you want to fall down a rabbit hole, follow a reference in the recipe’s headnote to La Cuisine des Mousquetaires, a French cooking show that ran for 16 years in the ’80s and ’90s, featuring French restaurateur Maïté (Marie-Thérèse Ordonzes), and her sidekick, Micheline Banzet. A sexually suggestive clip of Maïte eating Ortolan earned it a cult following. But for all its gastronomic pleasure and excess, the cookbook is shadowed by loss; the apocalypse is also personal. McMillan spent some of 2017 in rehab for alcohol addiction, something he admits compromised the extent of his collaboration on the book, which was cowritten with Morin and Meredith Erickson. “I’ll be brutally honest,” he says. “I had such a rough time [that] Fred and Meredith did a lot of work. Out of the three, I probably did the least.”

And over the past year, he and Morin have faced the loss of two beloved friends: the restaurateur and fishmonger Jon Bil, who helped build Joe Beef, and Anthony Bourdain. McMillan skirts any questions about the latter out of respect for Bourdain’s family and daughter. But it’s clear that both deaths have shaped him and Morin, both of whom are nearing 50. The specter of addiction, cancer, and depression has made their own mortality a topic of thoughtful consideration.

“We need cataclysmic events to reassess,” McMillan says. “There isn’t a day I don’t wake up in the morning, look out my window, and feel sad for our culture because we’re not there yet.” At the risk of hurrying the apocalypse along, one thing’s certain: They’re ready for it. Huddled down among their supplies in the root cellar, they wait to greet the day after.

Montreal has potholes the size of resort hot tubs, obsolete futuristic highways, and crumbling overpasses. But we love this city with a love the size of Texas. Why? We can buy and eat rabbit, duck, horse, or offal within a two-mile radius of wherever we are on any given day. Indeed, the Montreal diner eats and loves kidneys for the meal that they are, not on a challenging dare, but because they are simply delicious!

A few years ago, Josée di Stasio, the grande dame of Quebec food media, introduced us to Monique Duveau and Olympe Versini, who were in town from the Michelin grind for a simpler bistro approach; Monique is a lady of the table, the best kind of food patron you could wish for. When we heard they were coming, we sent one of the cooks to the Atwater Market to fetch some rognons (veal kidneys). At the time, we were into putting a salt crust on everything: wrapped them in a duxelles of chanterelles, wrapped that in caul fat, and then made the salt crust. We sculpted the crust to look like a young calf at rest on got the best of it.

Note: When it comes to kidneys, find out from your butcher what day of the week they come in; don’t wait—they get funky after a while. Ask your butcher to trim away any fat and remove the bigger nerves.