Get a free recipe
Subscribe
A Jewish Bread Lives On in Germany
By: Sonya Gropman Illustrations: Joan Alturo 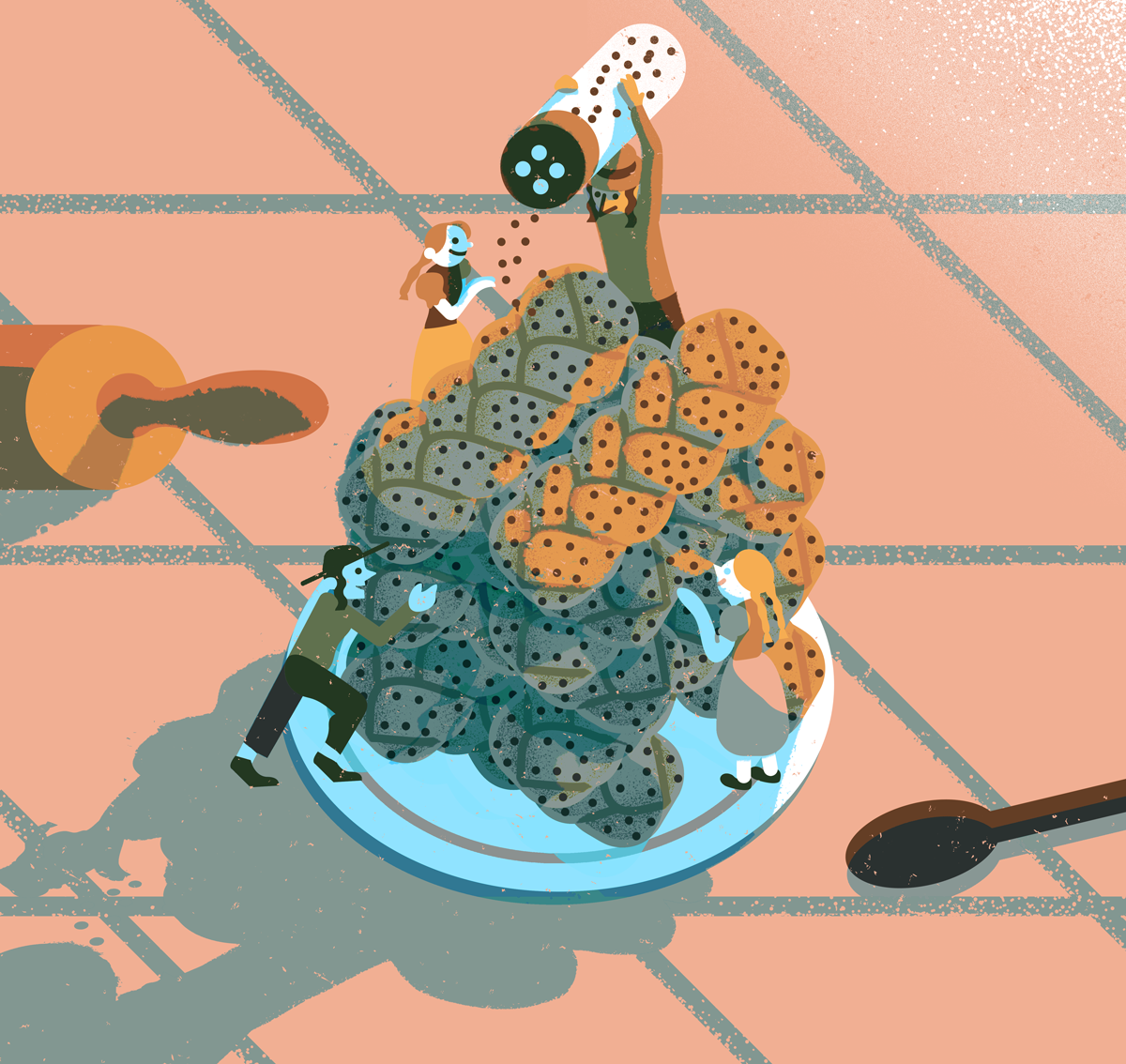 The German-Jewish cooking tradition is being carried on today by only a few bakers in Germany, who are still making a beloved braided bread called berches.

We drive past an old church with a stork’s nest perched high atop the chimney, round a corner, and stop in front of a modest, glass-fronted store set back from the road. We’re in the small town of Obersulmetingen, Germany, accompanied by friends who kindly offered to drive us here from Munich. We’ve come to talk to the owner of Bäckerei Mast about one of his breads—berches.

My mother and I are in the country to do events for the cookbook we coauthored about German-Jewish food—a tradition that’s hidden in plain sight here. While there’s a growing population of Jews in Germany today, it largely incorporates cuisines brought from Russia and Israel. Hardly anyone recalls the foods eaten by the Jews who had a long history in Germany.

On any given Friday evening before World War II, a German-Jewish family might sit down to a meal of meat broth with matzoh balls, stuffed veal breast, potato schalet (a baked dish, like a kugel), and a vegetable dish such as kohlrabi in white sauce, asparagus vinaigrette, or perhaps krautsalat, a green cabbage slaw similar to sauerkraut. Cakes are generally eaten in the afternoon in Germany, but for a special meal, dessert might be Kaisertorte, a Passover cake with apples baked into the middle. One important constant was berches (or barches in some regions), the German-Jewish ceremonial bread blessed and eaten on Friday evenings at the beginning of Sabbath and most holidays. It was a standard of German Jews for hundreds of years, up until the Holocaust but continued in refugee communities around the world, most notably in New York City, Haifa, Israel, and England, where surviving German Jews settled. My mother, Gaby, who was born in Germany and emigrated to NYC, grew up in the 1940s and ’50s eating it in Washington Heights, where numerous bakeries sold it (none remain today).

Like challah, its Eastern European cousin, berches is a braided bread, but the recipes differ in a few ways. Berches is generally a “water bread” containing no egg. Challah is pale yellow, has a rich, fluffy texture, and is generally sweetened, while berches is whiter and has a sturdier texture, a slightly crisp crust, and a taste akin to sourdough (it is decidedly unsweetened). It is satisfying to eat out of hand at the Sabbath table and lovely toasted with butter and jam or eaten as a sandwich with cold cuts. Stefan Mast measures the flour for a batch of berches.

Many versions—ours included—incorporate mashed potato into the dough, adding moisture to the bread. This addition likely originated as a dough extender: When white flour was precious, substituting a less expensive ingredient for some of the flour made it more affordable. While weekday breads were whole-grain, and therefore brown, berches was made with white flour and was a Sabbath treat, helping to define the special day of the week as distinct from weekdays.

We enter the bakery, its long glass case filled with pastries, while shelves on the wall are filled with a selection of breads. Stefan Mast, 50, owns the bakery with his family. He was bequeathed the recipe for berches by a local baker upon his retirement in 2001 and says he is continuing the tradition, having been “initiated into the secrets of berches.” He’s fully aware of the Jewish history of this bread and keeps a binder full of information about it, including documentation of an exhibition in 2009 at the nearby Museum of Bread Culture in Ulm.

He also hands out an informational sheet to customers who are interested. He tells us that historically, many non-Jewish bakeries had kosher certificates, which allowed them to sell to observant Jews. His bakery retains such a certificate, but since he also sells dairy products, his bread isn’t considered kosher by the nearby synagogue. Mast bakes around 70 loaves of berches per week, selling most of them on Saturdays to non-Jewish customers who enjoy it for its “traditional” taste. He himself eats it for breakfast on Sundays. He invites us into a huge back room flooded with natural light. There are industrial mixers, containers of flours and seeds, long worktables, and employees working with dough.

He begins making berches dough, calling up the recipe on a computer screen, then weighing out the flour, salt, malt, and yeast into a mixer (all three bakeries we visit use the same four ingredients in their berches). He dumps the finished dough into another machine, which evenly divides it, then another, which rolls it into strands. It’s now time for braiding, and my mom (who has been translating) is called into action! Mast teaches her his braiding technique: five strands, starting in the middle of the loaf and braiding down, then flipping the entire thing upside down and completing the braid on the other side. Two of these loaves are stacked double-decker style, to signify the number 12 (five strands x 2 + 2 loaves = 12), a meaningful number symbolizing the 12 tribes of Israel. By now the bakery has closed for its midday break, and all the employees are gone. He suggests we return later to pick up a couple of the loaves we’d braided. After an asparagus-filled lunch in town, we return to pick up our bread. It’s heavily strewn with poppy seeds and has a crisp crust and a dense, chewy interior. It’s delicious. We next head to Bamberg, the medieval city in Bavaria where my mother was born. We visit two family-owned bakeries, Bäckerei Kerling and Bäckerei Seel. Each is over 100 years old, has sold berches for as long as the owners can remember, and are on sites that have housed bakeries for around 600 years! Like Mast, the berches customers of these bakeries were originally Jewish and are now almost entirely non-Jewish.

Edgar Kerling, 60, tells us that in the “old days” (pre-WWII), they baked berches on Fridays for Jewish customers, but today they bake it on Saturdays. My grandfather grew up just a few blocks from Bäckerei Kerling, and I realize it’s entirely possible that my great-grandmother bought her berches here. Kerling continues baking it (three braided strands over three) to maintain a continuum of tradition. He always sets aside one loaf for his own family, who live upstairs from the bakery.

Alfred Seel, 53, tells us he continues to bake berches (braided with four strands) partly in remembrance of the Jewish community, but also because people love it. He sells about 60 loaves a week, including some to a local synagogue, whose rabbi, Yael Deusel, tells us her congregation orders loaves for Friday night services and holidays.

We’re happy to see Friedel Korten, 80, whom we first met in 2015. She grew up in a formerly Jewish quarter in Oberlauringen, about 45 miles from Bamberg. The neighboring Jewish women taught her family to bake berches, which she is now an expert at making, turning out dozens of loaves for town celebrations (hers are a fanciful one strand over three over five). Her continuation of this tradition in her home kitchen—as well as that by the professional bakers—illustrates how a food tradition has been shared between two cultures and has now, at least in some areas, been absorbed as a German tradition, even as the Jewish roots remain just below the surface.

Sonya Gropman is the coauthor of The German-Jewish Cookbook: Recipes & History of a Cuisine, Brandeis University Press, 2017. She has a background in visual art, painting and photography, and is the coordinator of Farm Spot, the CSA in Jackson Heights, her neighborhood in NYC.