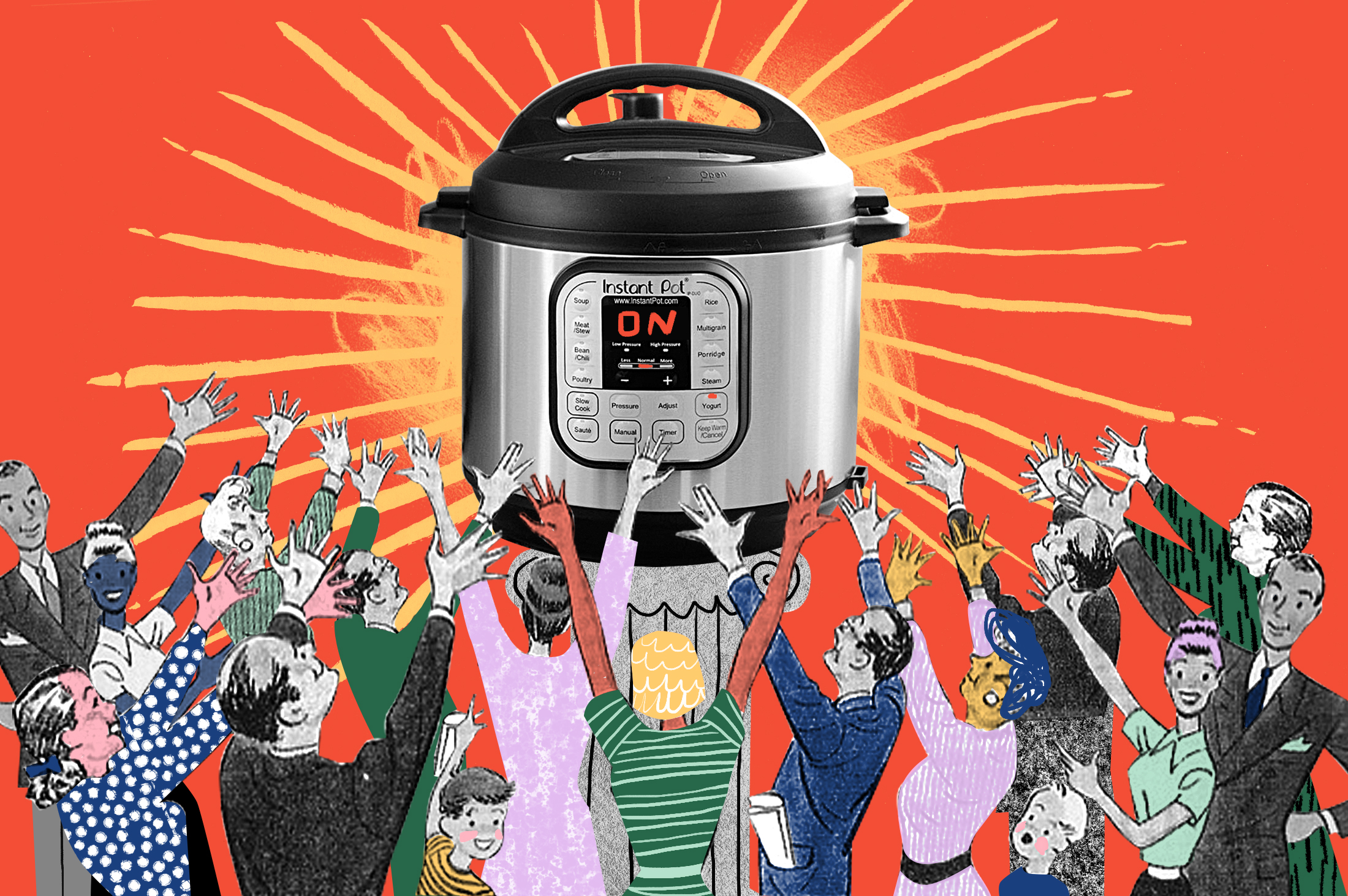 A viral kitchen appliance is changing the way we cook.

It may seem surprising that in the 21st century, home cooks are going absolutely nuts for pressure cookers. Slow cookers, too, a Super Bowl party fixture and throwback to 1970s-era Crock-Pot dinners, are a top-searched term on high-traffic recipe sites like MyRecipes.com. But what attracted people to these kitchen appliances in the first place remains the allure today: convenience. The ability to make healthy meals on the cheap, and fast, in the case of the pressure cooker, or, in the case of the slow cooker, in absentia.

Enter the Instant Pot, a multiuse countertop cooker that may be the world’s first viral kitchen appliance. Version 1.0, introduced in 2010 by a company based in Ottawa, Canada, was created as an electronic slow cooker/pressure cooker hybrid, and it swiftly established itself as a culinary disruptor. Just like that, home cooks no longer had to choose between cooking slow food fast or setting it and forgetting it. They could do both, and with a foolproof electronic version, supervising a sometimes terrifying stovetop pressure cooker became a thing of the past.

In the most basic terms, a pressure cooker is a sealed vessel that holds steam during cooking. The pressure builds in the pot, increasing the temperature at which water boils. This raises the cooking temperatures of what’s in the pot, and subsequently decreases cooking time. Cooking stops when the pressure releases—the part that scares (and possibly scars) people. While new stovetop models are incredibly safe and the chances of them spewing like geysers are slim, there still is a negative stigma attached to these devices.

The pressure cooker has been a cooking implement since 1679, when the French physicist Denis Papin introduced “A New Digester or Engine for Sofning [sic] Bones.” The device, as Papin’s name suggests, lends itself to culinary miracles. Beans transform from dry to tender in 20 minutes without presoaking. A frozen hunk of meat melts into a rich stew in the same amount of time. Bone broth, which takes up to 24 hours on the stovetop, is done in two hours under pressure. “It’s what I call fast-forward cooking,” says pressure cooker guru Lorna Sass, the author of Pressure Perfect, who, for the record, has never used an Instant Pot. “You throw the dried porcini in, the risotto rice in, broth, you have a delicious risotto that’s maybe, start to finish, ten minutes.”

Instant Pot demos have exploded on YouTube. Users are so active, a lingua Instant Pot has even developed among them.

These days, pressure cookers are sophisticated. Like the iPhone, every year or so, Instant Pot releases updates, piling on features like Bluetooth connectivity in the Instant Pot Smart, which allows remote use with the help of an app. The Instant Pot 7-in-1 edition, released in December 2013, offers additional rice cooking, yogurt making, steaming, warming, and sauté functions (the latter allows you to brown ingredients in the same pot you’re cooking in, something a traditional slow cooker can’t do). This model is the #1 best-selling electric pressure cooker on Amazon, with other Instant Pot models occupying the top five slots in that category. At press time, Instant Pot electric pressure cookers are the fourth, fifth, and twelfth overall best-sellers in Amazon’s Kitchen & Dining department. Though Amazon wouldn’t disclose numbers, a press release from the online retailer stated that 215,000 Instant Pots were sold on Prime Day alone in 2016 (compared to only 90,000 televisions). A spokesperson for Instant Pot confirmed that 2016 marked yet another year of double-digit growth.

Instant Pot, which has a surprisingly primitive web site for an Amazon phenom, has limited its advertising to the social media variety, betting on the power of online word of mouth. According to a story on NPR, the company gave away more than 200 of its appliances to bloggers and “influencers” to encourage cyber-gushing in the form of recipes and testimonials. The Internet is flooded with videos by pros and amateurs alike created specifically for the device, leaving little guesswork when it comes to how to make, say, bouillabaise or ribs. Big-time blogs such as Nom Nom Paleo, the Martha Stewart of cave-person cooking, according to The New York Times, has an entire section of the site devoted to Instant Pot recipes. The affordable price point helps, too: The 7-in-1 Instant Pot costs around $99, versus almost three times as much for other highly rated electric pressure cookers.

The power of the Instant Pot is real. Nili Barrett, whose Instant Pot tutorials are among the most-watched on YouTube—with more than 132,000 views for her whole-cooked chicken—started her channel as a way to keep in touch with friends. When she began posting Instant Pot recipes, her star rose. “Instant Pot users would share my videos with their friends,” says Barrett. “That’s when my popularity grew.” Now she sees a spike in views and subscribers around Amazon Prime Day and Black Friday, when Instant Pots go on sale. “I’ve gotten 3,000 new subscribers since Black Friday, which is a 40 percent increase in the last three months.”

It’s hard to tell what came first—the pressure-cooked chicken or the pressure-cooked egg. Does the Instant Pot sell because of clamoring fans, or do the fans clamor once they’ve bought the device? It seems like one hand feeds the other. The official Instant Pot Community Facebook page, nearly 400,000 members strong, has become a pressure-cooking guild of sorts and home to some of the most die-hard members of the online community. When I joined the group to ask whether it was normal for the pressure release valve to come right off the lid of a new Instant Pot, I got 11 responses in 10 minutes. The users are so active, a lingua Instant Pot has even developed among them. NPR = natural pressure release. QR stands for Quick release. PIP is Pot-in-Pot cooking. “A lot of people are in what is called the Instant Pot cult,” says Barrett. “They want to make the only appliance in their kitchens the Instant Pot, and they want to make everything in there.”

But some people still prefer the straightforward slow cooker. “In the pressure cooker, as soon as you get it off to pressure, you can’t just pause it, open it and add something new,” says chef Hugh Acheson, a Top Chef judge and the author of a forthcoming book of slow cooker recipes. “In the slow cooker, you can add incrementally through the process.” With the Instant Pot, you can do both.

5 Tips for Getting the Most Out of Your Instant Pot

Add more spices than you normally would to your pressure-cooked dishes, says Sass, since the method has a tendency to dull flavors.

Barrett recommends freezing a portion of food, such as chili, beef stew, or chicken parm in a freezer bag nestled in a bowl or container, then reheating it in the Instant Pot using the pot-in-pot method. That’s dinner from frozen to piping hot in as little as ten minutes.

Use the yogurt setting to make fresh ricotta in a few minutes. According to Instant Pot expert Laura Pazzaglia, behind the popular website Hip Pressure Cooking, it doesn’t take much. Pour a quart of milk into the pot insert, close the lid and set the valve to vent, push the “yogurt” button, then press “adjust” until the word “boil” appears on the screen. See recipe below.

5. Experiment, play around, have fun

Whether you’re using a stovetop pressure cooker or an Instant Pot for the first time, Sass and Pazzaglia both recommend boiling hot water in your pressure cooker first to familiarize yourself with how it works. Remember, cooking should be fun. Ricotta Made in the Instant Pot
This recipe comes courtesy of Hip Pressure Cooking, a great resource for getting the most out of your Instant Pot. Indeed, pressure cooking can be hip. But also really fast and convenient.

Ricotta does not need a pressure cooker—it can be made with any old pot with lots of supervision and stirring—but the automated programs of Instant Pot make the process so much easier. Both the Instant Pot Duo and Smart have a setting under the yogurt function that brings the milk slowly up to the perfect temperature (80°C or 176°F) needed for making fresh ricotta cheese. This recipe makes approximately 8 ounces of ricotta cheese.

DIRECTIONS
1. Add the milk to the Instant Pot, close the lid and set the valve to “vent.” Push the [Yogurt] button and then [Adjust] until the display says the word “boil.”

2. Once the program is finished (in 20-30 minutes depending on the starting temperature and quantity of milk), remove the Instant Pot stainless steel insert and put on a trivet on the counter. Mix in the salt, if using, using a high-heat-resistant spatula or clean wooden spoon, stirring it in well.

3. Pour in half of the squeezed lemon juice and stir slowly and delicately. The milk should begin to coagulate. If nothing happens after about two minutes, add the rest of the lemon juice and keep stirring slowly.

4. Pour the mixture through a fine-mesh strainer, or a regular strainer lined with a fine cheesecloth (or unbleached paper towel, or coffee filter). Let strain from 5 to 15 minutes (depending on how fine the strainer is) until only the milk solids remain. Do not squeeze or push.

5. Using a spatula or spoon, pull the outer edges of the ricotta toward the center to form a small, round loaf. Flip onto a small serving dish or plastic refrigerator container, where it will keep for up to 5 days. Save the strained liquid and use in any pressure cooker recipe in place of stock (for example to make rice) or in place of water for future baking projects. 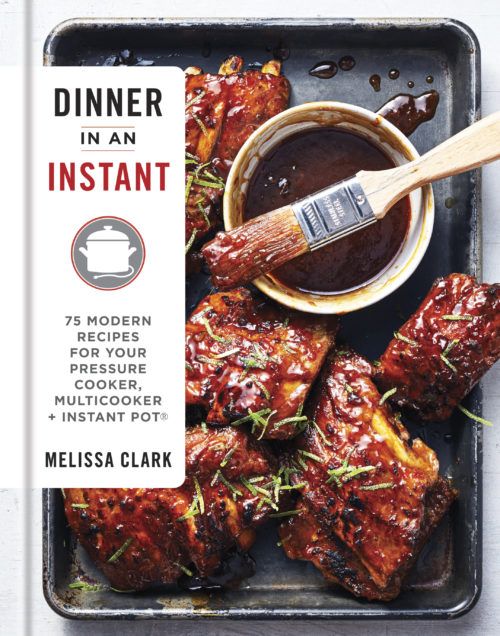