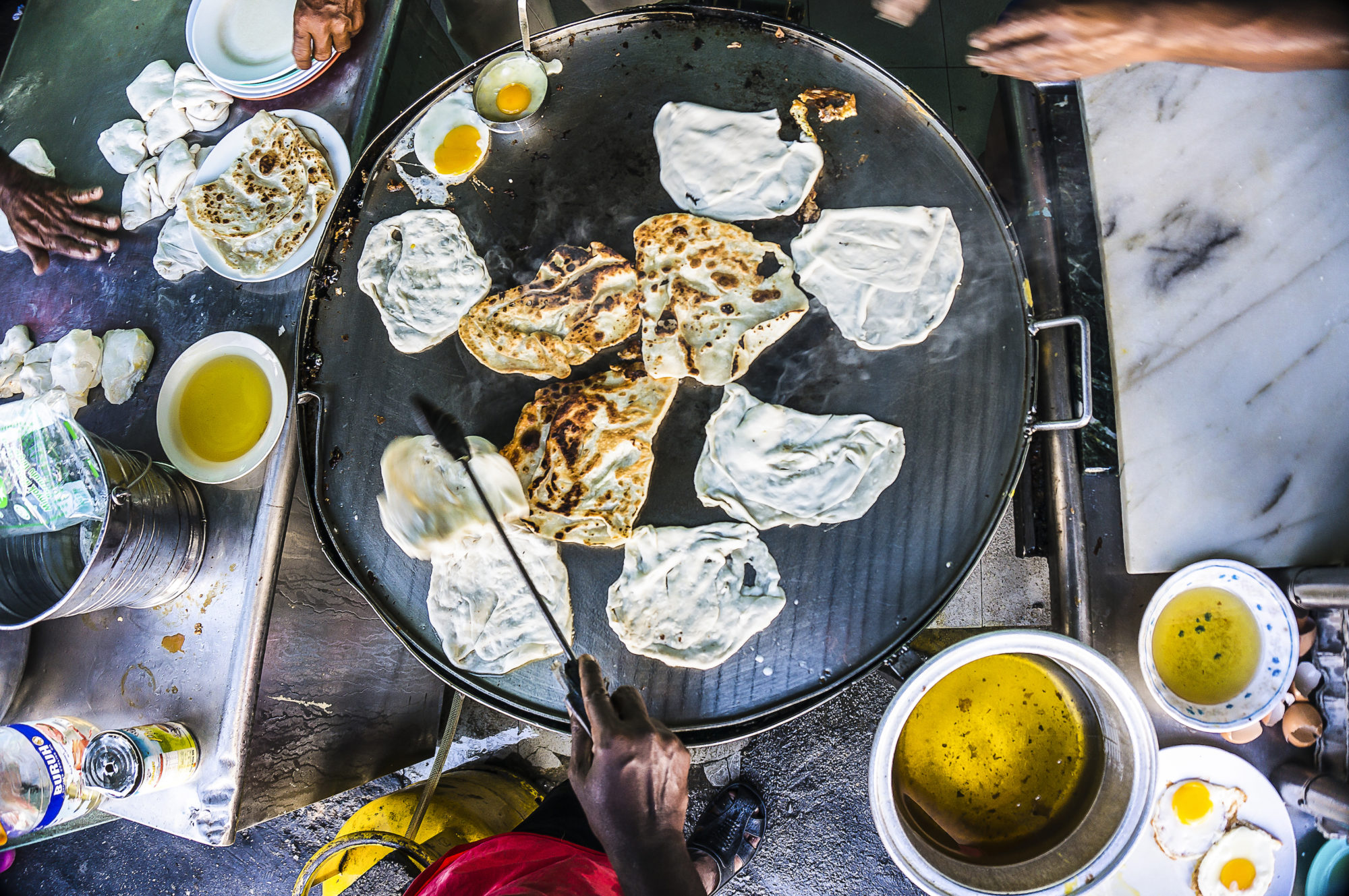 Roti canai, despite its Indian name, ingredients, and links to the Tamil people of Southern India, is a bread born in Malaysia.

It’s no surprise that roti canai gets mistaken as one of India’s legendary breads. Its flattened, disc-like shape is similar to parottas and chapatis, and its ingredients—maida flour and a touch of ghee—are unmistakably Indian, much like its name. But ask for a roti canai in Mumbai or Kerala and all you will get is a quizzical shake of the head. Because while roti canai has Indian roots, it was a child of Malaysia, through Tamil immigrants. And within the past century, it has grown to be Malaysia’s unofficial national bread through a combination of colonialism, cultural assimilation, and the country’s pluralist palate.

In its most basic form, roti canai is an unleavened bread made from maida flour (a low-protein wheat flour similar to cake flour), water, and a bit of oil. The dough is first stretched until thin and translucent, and often flipped repeatedly in the air, like a matador twirling his cape. Christina Arokiasamy, author of The Malaysian Kitchen, explains that in South India, dough is formed on a flat surface, but Malaysia’s roti canai differs as it’s “flipped and spun in the air, akin to making pizza,” earning it the moniker “the flying bread.” It’s then folded back onto itself, trapping bulbous pockets of air within, before it’s stretched a second time and slapped onto a hot plancha glistening with ghee.

After just a minute or two of frying, it transforms into a flaky, pillowy flatbread with a scallion-pancake-like exterior—crispy, savory, and aromatic—but with an inside closer to the chewy, fluffy inner layers of a croissant. And often, as Arokiasamy recalls from childhood, they come wrapped in a sheet of Malaysian newspaper, a parallel to British fish and chips. Like much of Malaysia’s multicultural cuisine, roti canai has roots in British colonialism. In the late 1900s, laborers from the Southern Indian state of Tamil Nadu (then known as the Madras Presidency of British India) were brought to West Malaysia (called Malaya at the time) under colonial rule. They were collectively known as Indian Muslims, or as they’re colloquially termed, mamaks. With mamak culture came many hybridized dishes (much like the rest of Malaysian cuisine born from Chinese and Hindu immigrants) like dals thickened with coconut milk, chicken curries scented with Malaysian pandan and kerisik (fried coconut paste), and nasi kandar (a modular meal of rice with various curries and side dishes). Then, of course, there’s roti canai, which Arokiasamy calls “Indian immigrants’ great culinary contribution to Malaysia.” Because like their makers, roti canai were uprooted and brought to a new country, but with time, both have inculcated themselves into the fabric of Malaysian culture.

Walk into any mamak diner, and a waiter will stroll up to your table, no menu in hand, expecting you to order one type of roti canai amongst an infinite set that all Malaysians seem to have memorized—whether it’s stuffed with roughly brunoised red onions, eggs, or slivers of canned tuna. Others utilize the crisped-up dough as a carrier for other ingredients, like roti maggi (chow-mein-like fried noodles folded into the bread), roti banjir, literally meaning “flood bread” (a roti canai soaked and served in a deluge of Malay chicken curry), and roti Beckham—more akin to Western-style breakfast sandwiches, with scrambled eggs, ham, cheese, and a liberal helping of mayonnaise.

Like croissants and Wonderbread, roti canai fits right into a family of breads that take on sugar just as well. Stuff in a handful of chopped fresh bananas and you have roti pisang. Spread on a heap of ghee and sugar before folding the dough for a roti boom, named for the explosion of calories. For Malaysia’s answer to pain au chocolat, sprinkle some Milo on top. And for a roti spread thinner than one-ply Kleenex, look to roti tisu (a Malay loan word for tissue). It’s crisped up on the plancha, then coated with palmfuls of sugar, and often made so theatrically large the finished product is served on two trays.

It is these riotous inventions, these multicultural mashups, these infinite variants stemming from this one bread—this is what has evolved the roti canai from its Indian origin and colonial roots into what it is today: a thoroughbred Malaysian bread.