Get a free recipe
Subscribe
Indian Mangoes: Crossing Continents in a Can
By: Nik Sharma 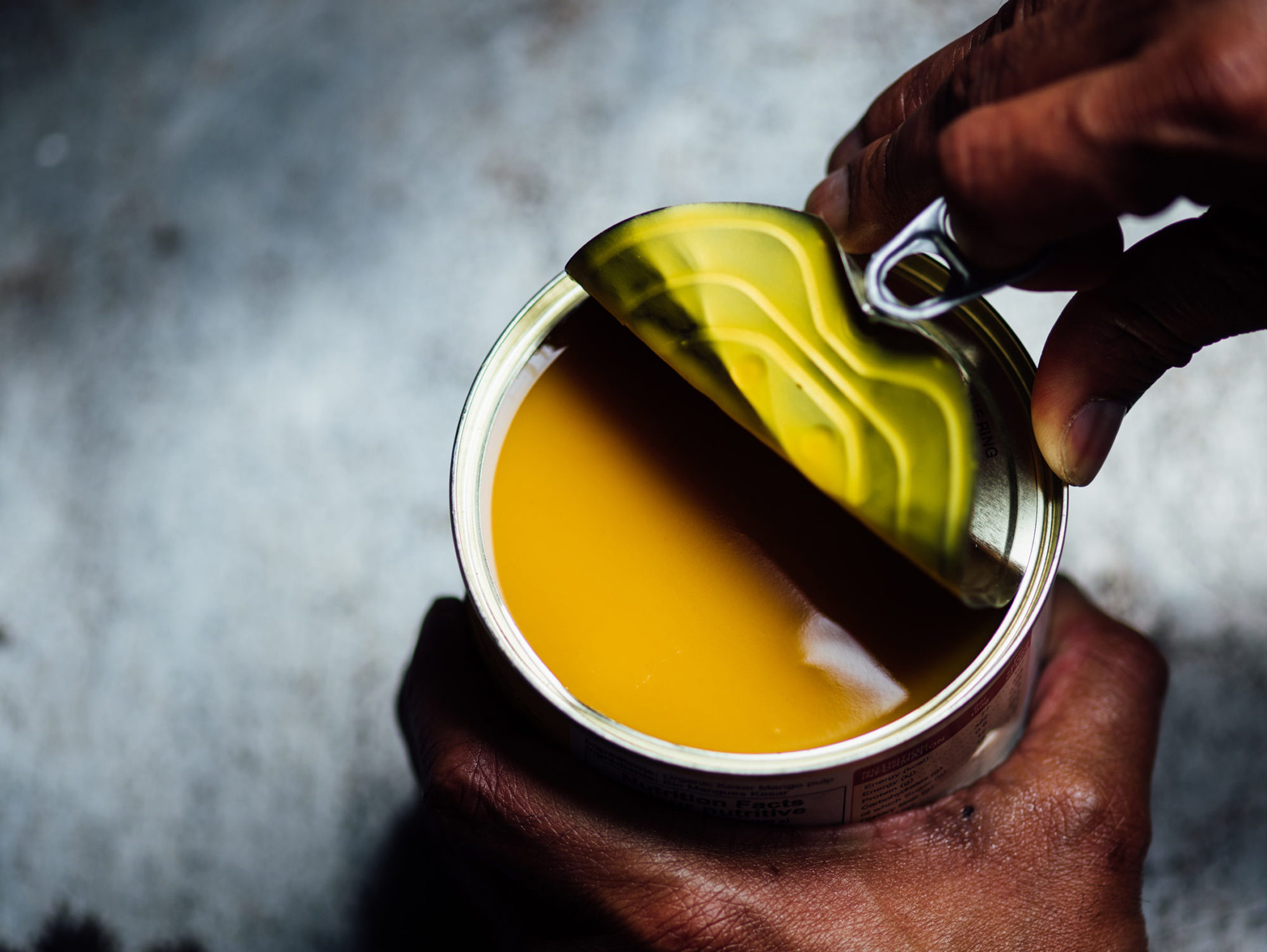 Four summers ago, while perusing the outdoor fruit section of Berkeley’s Monterey Market, I stumbled upon several crates of bright yellow mangoes that had traveled all the way from India. It had been more than a decade since I had eaten those mangoes, which I knew so well from childhood. I had missed the fragrant perfume and the texture of the soft, sunny flesh that would give way to the sweet nectar trapped inside the ripe fruit. The mere thought made my pulse quicken.

Though India is one of the world’s largest mango producers, most mangoes sold in America are grown in Mexico and the Philippines. Without a label or some prior familiarity with the shape, it can be tricky to identify those from India, but there is a significant difference in aroma, taste, and texture. The two most popular fruit varieties (it is estimated that there are more than 1,000 varieties in India) include the Alphonso and the Kesar, which are not only sweet and juicy but lack the fibrous texture and chalky aftertaste that some mangoes have. The mangoes we encountered in Berkeley were expensive, at $5 a fruit, and my husband, Michael, was hesitant. He hadn’t eaten an Indian mango before and couldn’t quite understand my excitement until I convinced him to try one. As soon as we got home, we sliced the mangoes and scooped out the soft flesh of the mango, and it tasted and smelled every bit like I remembered mangoes in India did in summer. Michael was in love; the deep, rich sweetness of the fruit had done the trick. Our only regret was we hadn’t bought enough. The year after, I went back to what I hoped would be my permanent mango hot spot, but there were no Indian mangoes to buy, and sadly I never found them again.

In America, a large portion of our produce is imported from other countries, so why not whole mangoes from India, the largest producer in the world? It turns out it wasn’t until 2007 that the USDA began to allow commercial shipments, and only after careful screening. Mangoes from India as well as produce from other countries are now exposed to a low dose of radiation followed by a period of quarantine to ensure the food is safe to eat and prevent the introduction of new pests and bugs. But while it is safe to eat these fruits once they make their way through this process, they might not always taste as good since they must endure an arduous and lengthy trek across the globe, and they’re still not that easy to find consistently.

Thankfully, mango pulp can be preserved by canning, which not only increases shelf life but also makes it easy to ship the product across the ocean to different parts of the world, knocking out most of the problems associated with shipping the whole fruit. Canned mangoes are less pulpy and more of a smooth, velvety puree, deep golden like turmeric, fragrant with that signature fruity perfume of ripe mangoes, and sweet to the taste, just like the fresh fruit but without the fleshy and sometimes fibrous texture (depending on the variety). You can buy the 1-lb, 14-oz cans online and at most Indian grocery stores year-round for about $3. The history of canned Indian mangoes began in an unlikely spot, close to where I found my mangoes outside India, in California. Around 1910, from an India that was still under British rule, a young Indian named A. B. Sircar had the foresight to consider canning mangoes. He took a trip to California, where he spent a few years working at different fruit canneries, studying the process of canning fruits like peaches and learning the methods for preparing the cans themselves. Armed with degrees in chemistry and bacteriology and the knowledge of how to can fruit, Sircar went back to India and established his own mango-canning business in the city of Muzaffarpur, using the same techniques and equipment used to can peaches he’d seen in America. The technology he brought back home eventually spread and made its way to other producers.

Once the fruit is ripe and ready to be picked, the soft pulp is separated from the skin and seed and then pureed to be canned and packaged. While there are several different varieties of mangoes in India, the ones I’ve come across most frequently are the ones made from either the Alphonso or the Kesar mangoes that are grown in the western states of India. Both varieties make excellent candidates for most mango-based desserts because of their rich flavor profile, and you’ll often find them listed in the ingredient section of Indian cookbooks.

For someone like me, canned mangoes from India are the perfect kitchen hack when I need to make a mango milkshake or a sweet lassi or a pudding. They give me just the right flavor with the extra depth of sweetness and aroma that I love so much. As I peel open the lid on this can, I’m greeted by the fruity aroma of golden mangoes and reminded why I cherish this flavor, excited by the prospect of what it might bring to my dessert table.