Get a free recipe
Subscribe
In Piemonte, the Anchovies Swim in a River of Green
By: Robyn Eckhardt Photos: David Hagerman 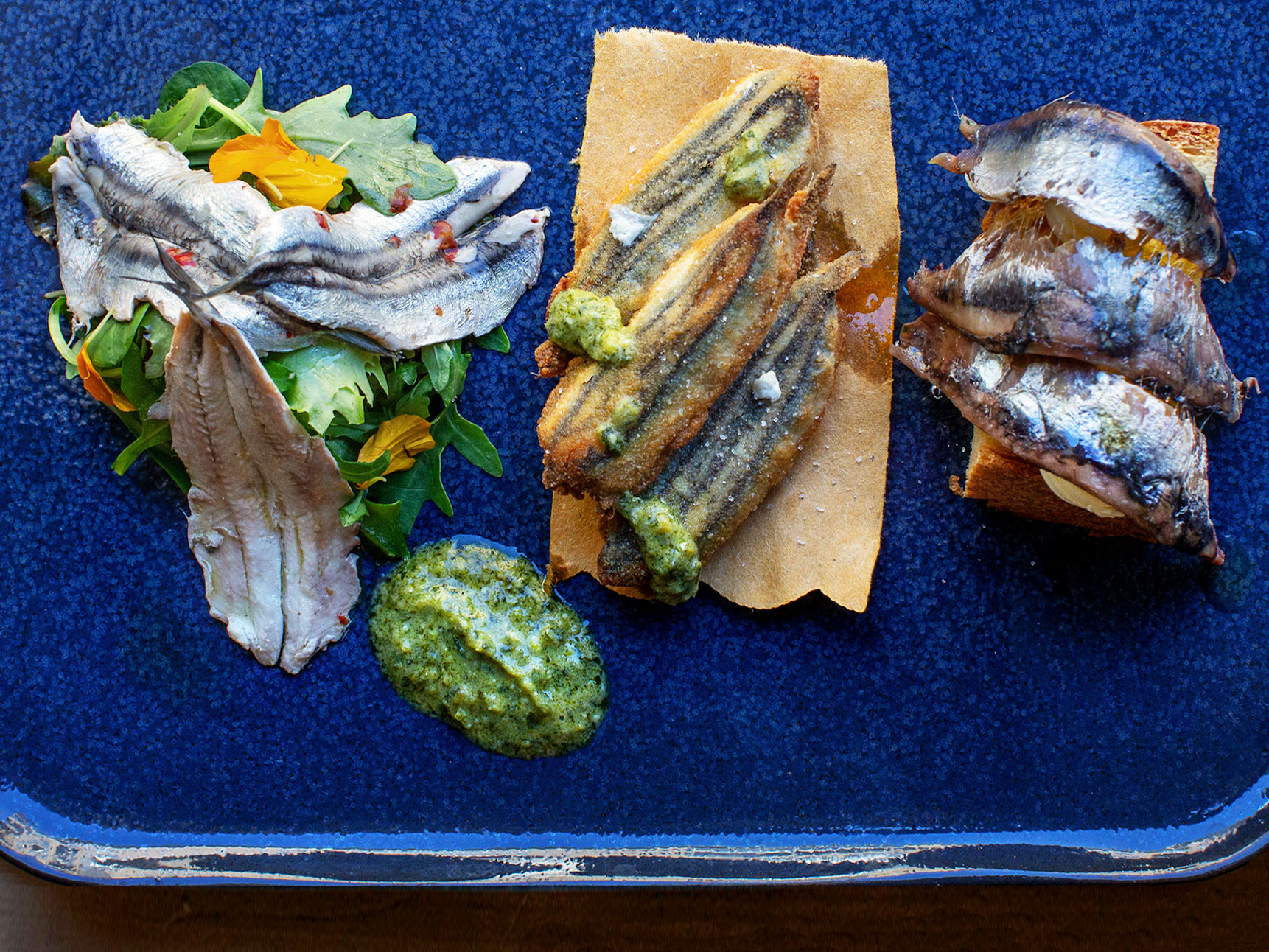 It’s messy, it’s fishy, and it will give you disastrously bad breath, but it’s all worth it for this Italian anchovy snack.

Piemonte is most commonly known as the land of wine, white truffles, and hazelnuts. But for me, this northern Italian region bordering France and Switzerland is the place that cemented my enthusiasm for preserved fish, in the form of one of its most essential plates: acciughe al verde, or anchovies in green sauce.

To make acciughe al bagnet verde (anchovies in a green “bath”), as the dish is also known, salt-preserved anchovies are washed and filleted, placed in a dish, and covered with a sauce that combines chopped garlic and flat-leaf parsley with olive oil, white wine vinegar, and sometimes a pinch of pepper flakes.

I was first introduced to acciughe al verde 16 years ago at a bar in Cuneo. It was aperitivo hour, and I dripped emerald oil onto the bar, my napkin, and myself as I used a fork to transfer an anchovy fillet onto a thickly buttered piece of bread. I grew up in a strictly “no fishy fish” Midwestern household, so there was no foretelling that this powerfully pungent dish would ride its wave of umami straight to my heart. Unapologetically piscine, heat-y from garlic, with a predominant saltiness answered by the bright bitter note of flat-leaf parsley, lightly assuaged by the bread and butter (a common but not necessary vehicle), acciughe al verde won me over at first bite. Known to every Piemontese, it’s not a dish for the fainthearted.

Acciughe al verde was traditionally included in merenda si noira, a late-afternoon meal eaten by farmers in the summer to fortify themselves through extra hours of daylight spent in the fields. Now the dish is served as an antipasto in restaurants, as an accompaniment to a drink or a glass of wine in old-style taverns, and as a component of apericena (a portmanteau of the Italian words for appetizer and dinner), the budget-friendly, all-you-can-eat cocktail-hour buffets frequented by young drinkers in Torino and other urban centers in Piemonte.

After moving to Piemonte two years ago, I was delighted to find that its table has much to offer enthusiasts of preserved anchovies like myself. Late autumn is marked with feasts of bagna cauda (“hot bath”), a rich, garlic-based anchovy dip or sauce for raw or cooked vegetables that’s kept warm over a flame at the table. Piemontese cooks spoon the same bagnet verde that sauces acciughe over cold, thinly sliced tongue and fresh cow’s or goat’s cheese, and serve a version of it alongside bollito misto, or mixed boiled meats. They stuff small hot red peppers with anchovy fillets and capers and preserve them in olive oil, and make lasagna with leeks and anchovy-garlic sauce. And preserved anchovies are often used to flavor creamy sauces to drizzle over light egg-based flans of asparagus, Jerusalem artichoke, and other vegetables. Given Piemonte’s landlocked position, the prominent place of anchovies in its pantry is a bit of an oddity. Acciughe salate were likely introduced to the region via ancient trade routes that connected it with salt pans in Aigues Mortes, on Provence’s southern coast. At the time salt was a precious commodity, and salt traders traveling the routes are believed to have concealed their cargo from tax collectors by topping up baskets of salt with a more paltry article of trade: salted anchovies. Eventually trade in these fish became a profitable business in itself. Demand for salted anchovies in Piemonte even gave rise to off-season opportunities for farmers in the region’s southern Alpine valleys, who bought anchovies in Liguria and returned to Piemonte to spend winters as itinerant sellers. A few became so successful that they left farming altogether, establishing a now-dwindling specialty trade that is today represented by a small consortium of sellers in Cuneo province.

Like any dish with historical presence and wide appeal, acciughe al verde sees many variations. Some Piemontese enrich their bagnet verde with a hard-boiled egg yolk or a slice of stale bread that is softened with vinegar before being blended with the other ingredients. Others add sharpness with a few vinegar-infused capers, complexity with a tablespoon or two of white wine, or extra fish flavor by adding a minced anchovy to the sauce. Cooks in southern Piemonte, which borders Liguria, might swap in young basil leaves for some of the parsley. Me? I’m a purist. The most basic acciughe al verde is such a delight that it needs no gussying up.

Though it’s frowned upon, and rarely admitted by offenders, those lacking the time or patience to clean and debone salt-packed anchovies may resort to making the dish with fillets packed in olive oil. But even the most high-quality oil-packed fillets lack the firmer texture of those pulled off a salt-packed fish, and they’re usually smaller.

One thing that is never up for debate is that the aroma of a properly made acciughe al bagnet verde will, and should, linger in the mouth long after the meal is over. For Piemontese, garlic breath be damned. As my Torino-born friend Adriana says, “What’s the point of bagnet without garlic?! It would be barbarian.”

Lead photo: Preserved anchovies with bagnet on the side at L’Archivolto Osteria in Ovada

Robyn Eckhardt is the author of Istanbul and Beyond and co-publishes the award-winning food blog EatingAsia. Follower her on Twitter at @EatingAsia and on Instagram at @IstanbulandBeyond.