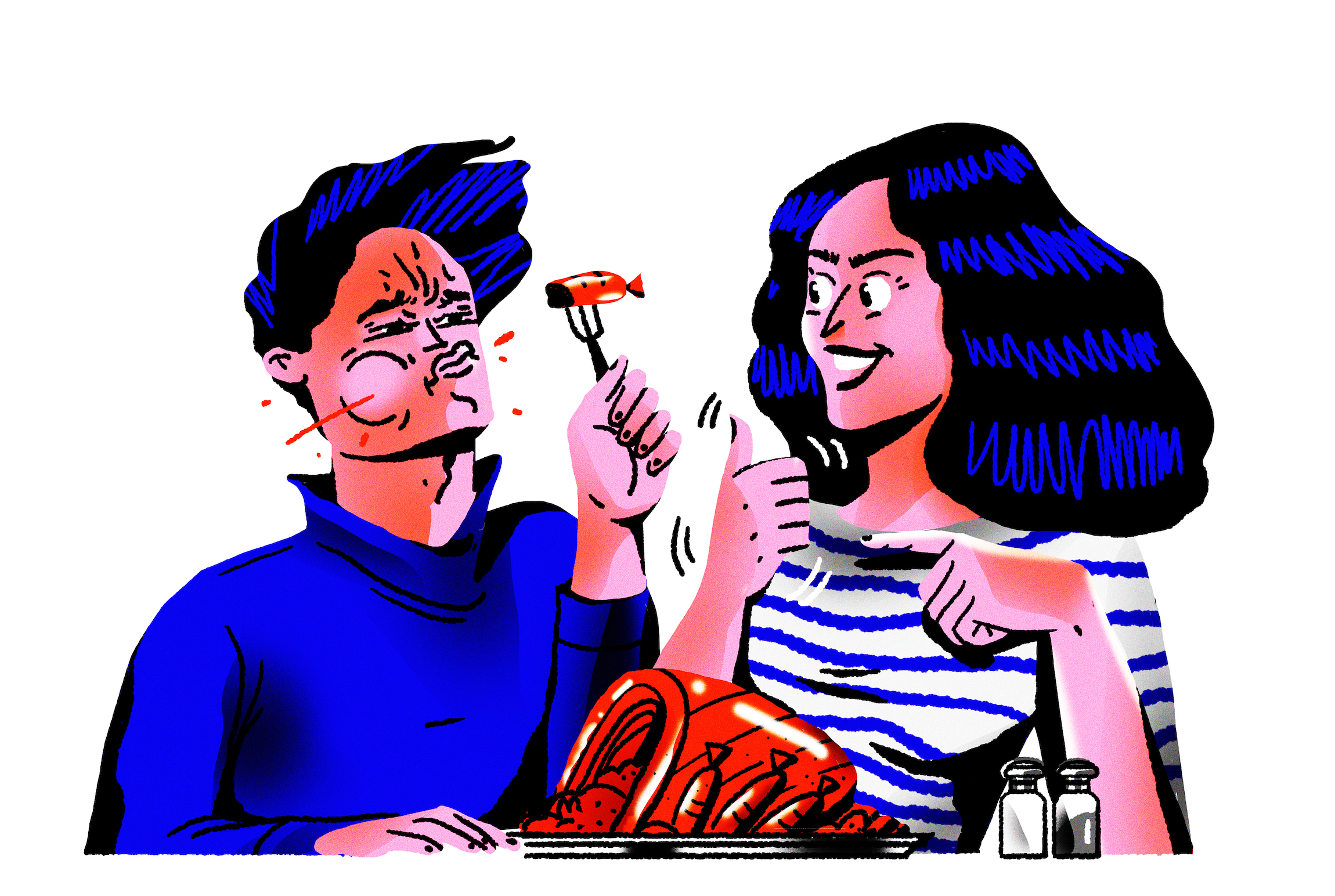 Why have imitation meats fallen so thoroughly and unfairly out of favor with modern vegetarians?

Late one evening recently, I found myself at a Brooklyn Whole Foods discussing a package of andouille Tofurky sausages with my cashier. “Are these good?” she asked me, and pleasantly, chattily, she explained that she’d never bought them before because, though she is a vegetarian, she “doesn’t usually buy this stuff.” Defensively—a passion for fake meat always seems to put one on the defensive—I assured her that I also never buy stuff like this. I gestured wildly toward my kale to indicate that I’m usually more of a vegetable person and this was a very occasional indulgence, like binge drinking, or extramarital affairs.

Fake meats like Tofurky, Field Roast, and their off-brand friends are vestiges of a time before we knew better—a punch line, a joke. The cool, modern way to be vegetarian is to eat actual vegetables, or grain bowls, or things with açai—to reap protein from avocadoes, almonds, and whole grains. The bad way, reserved for plebes and simpletons, is to eat processed tubes of wheat gluten masquerading as hot dogs. But as the steak-fed child of Midwestern parents, I cannot let them go.

Consider their unlikely merits: Fake meats are indulgently salty and satisfying, without gristle, or marbling, or wayward veins, which I have always found unsettling in real meats, as they remind me of my own body. The last thing you want to be reminded of, biting into food, is the pliancy of your own flesh.

Fake meat, on the other hand, brings with it no surprises. Unlike the roller coaster of actual meat, every freakishly consistent mouthful exactly lives up to the promise of the last. People say death and taxes are the only things you can be sure of in life, but they are wrong. You can also be sure of Tofurky. I have crumbled it into stews (with vegetables!). I like it in slices, totally bare. Twice a year, I do a full Thanksgiving centered around it. Once is not enough.

People say death and taxes are the only things you can be sure of in life, but they are wrong. You can also be sure of Tofurky.

Almost everyone I talk to tells me there are three reasons to eat fake meat, and none of them are taste-related. One is animal rights, one is the environment, and the third is personal health. “For me, the number one issue is animal rights,” says Ravi DeRossi, the owner of New York City restaurants and bars including Avant Garden and Death and Co., who has been gradually turning his mini empire vegan. I had reached out to DeRossi because I thought he, too, might understand my love of faux meats, given his plans to open up a vegan butchery in Williamsburg this fall (that will be interesting!). But it turns out I was wrong. “I’m not personally a huge fan,” he says of faux tubesteaks, though he also assures me (with a hint of judgment?) that he is emphatically in favor of them, as a concept.

“I don’t care what it takes to get people to eat less meat and save more animal lives,” he says. “If that means eating mock meats because that’s what they like, by all means do it.”

But when I press him on fake meat flavor, his enthusiasm wanes. Some of the brands out there are pretty good, he says, like Gardein crab cakes (“With Vegenaise tartar sauce, you almost have no idea you’re not eating real meat”), the Impossible Burger (“pretty good”), the Beyond Burger (“okay”). But for the most part, he’s unmoved by imposters. “If I’m trying to replicate veal piccata”—I have asked him specifically about replicating veal piccata—“I don’t think it will ever taste like real veal piccata. It’ll always have that weird consistency.”

Isn’t it possible, I want to know, to appreciate fake veal piccata on its own wheat-glutinous terms? Sure, it’s not veal piccata (nor is it really piccata), but couldn’t it become something else that is also delicious, like how pepperoni is good but so is sausage?

DeRossi remains skeptical. “I think the idea is [for analogue meat] to be the best impression of that meat, right?” he asks. Which, sure, by that logic, of course it’s a losing battle. Faux meat isn’t meat (yet), and while imposter technology is improving fast (one San Francisco company grows non-meat meat from actual animal cells and expects its products to hit store shelves within five years), we are still, for the moment, in a world of vital wheat gluten and pea protein isolate. There may be beefless burgers that bleed, but the best we can hope for now, DeRossi says, is for a meat-loving meat eater to find the imitation “almost as good.”

But when I eat Tofurky, I tell him, I am not confused. I’m happy. It bears essentially no resemblance to turkey, except in beigeness, and like a good mother I love it anyway, not for what it isn’t, but for exactly what it is. “Yeah,” he says, slowly. “I think you’re probably abnormal in that sense.” I am not inclined to argue.

What I don’t understand is: Why? Is fake meat actually revolting and I’m too dense to know about it? (I do have a terrible sense of smell.) Is it a psychological thing? A crisis of authenticity? A failure of branding? Would more people share my affection for the stuff if it were called something un-meat-related, like “soy-glazed gluten ball,” instead?

While mock meats don’t tend to be nutritional powerhouses, they’re not categorically different from…well, pretty much any other processed food. Most of them definitely violate Michael Pollan’s preferred guidelines: more than five ingredients, and your grandmother almost certainly never heard of them (unless your grandmother has a particular fondness for soy protein isolate or maltodextrine or calcium lactate from beets).

I send Deanna Hoelscher, the director of the Dell Center for Healthy Living at the University of Texas School of Public Health, the ingredient lists for a whole farm’s worth of fake meat products, in the hopes of finding a carcinogenic gun—perhaps the food equivalent of nicotine. There isn’t one. “All the ingredients are pretty typical ingredients that you would find in other foods,” she tells me. “If you had chicken strips that had chicken, you’d probably have a lot of flavoring in them, too.” So what?

Having confirmed that the stuff is not literally poison, I turn to Charles Spence, a gastrophysicist and the head of Oxford University’s Crossmodal research lab, who studies “how our brains manage to process the information from each of our different senses…to form the extraordinarily rich multisensory experiences that fill our daily lives.”

I ask him what has become the driving question of my life: Why doesn’t anyone like Tofurky as much as I do?

“Given that taste is literally just sweet, sour, salty, bitter, and umami,” he explains, “there’s no liking or otherwise—we like all of those things, more or less. What we don’t like, sometimes, are the flavors or aromas or the visual appearance, or some higher cognitive thing.” This higher cognitive thing, he suggests, is the reason many of us recoil at the thought of eating insects, despite never having done it. It is also the reason, perhaps, that even the concept of “artificial meat” inspires a sense of unease.

But lots of foods that we eat unblinkingly are artificial. According to Spence, there is indeed “something special” about meats, and it might come down to our animal instincts. “We’re more sensitive to discrepancies, slight changes in quality that might mean it shouldn’t be eaten, because that could be fatal in a way that, for other categories of food, doesn’t matter quite so much.”

It’s also conceivable that what’s truly unsettling about faux meats isn’t how far they are from the real thing, but how close. “That’s kind of a bad place, the uncanny valley,” Spence says. “Something’s just sort of missing, and it’s that so-close-I-could-almost-be-fooled that we have an aversion to.”

In an alternate universe, though, wouldn’t this trickery just be seen as cleverness? As is so often the case, he tells me, the answer is context. “Yeah, it’s cool when people pay lots of money for it in a fancy restaurant with a star chef,” Spence says; when brands or “anonymous science labs” do it, not so much.

But barring an admirably hard-core coterie of vegan Instagrammers, there aren’t too many other champions for the Tofurkies of the world, in all its chewy glory. I am not a celebrity, or a chef. I am not even a hard-core vegan Instagrammer. (Every few months, I post a picture of a dog.) And there may never be a Tofurky revolution—at this point, there isn’t time. But I will continue to revel in my mock meats (in tasteful moderation!), one spongy, salty unbird at a time.