Get a free recipe
Subscribe
I’m Not Smiling. My Knife Is Smiling.
By: Danielle Bernabe Photos: Aaron Bernstein 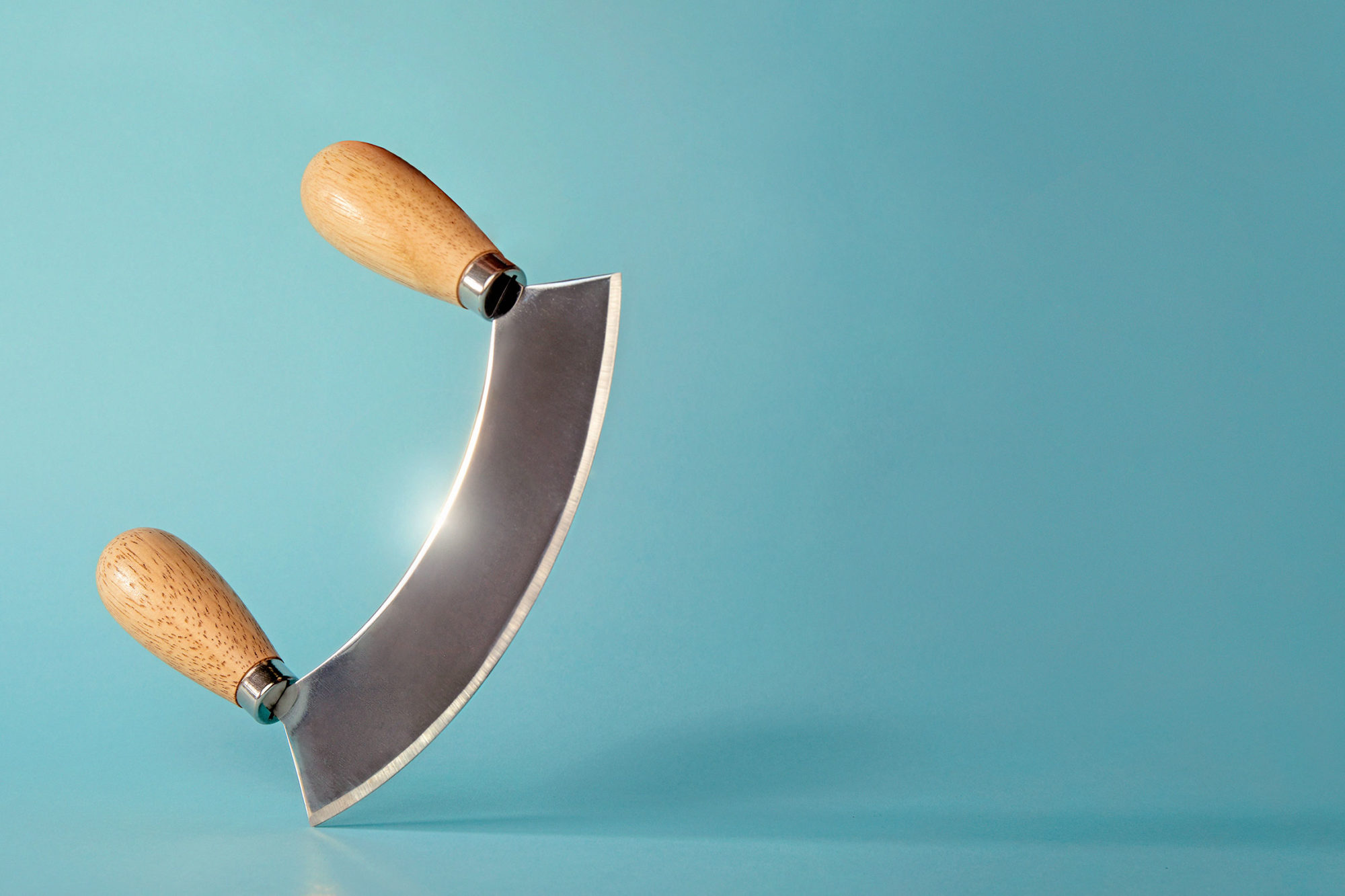 It may seem like a holdover from the Italian nonnas of yore, but here’s why the mezzaluna should make the cut in the modern home cook’s kitchen.

In the oversaturated market of chopping gear, the mezzaluna, or “half moon,” is not your standard kitchen tool. Used to coarsely mince together herbs, dried fruits, garlic, nuts, olives, salads, and much more, its intuitive design brings joy to cooking while choreographing a delightful waltz on a wooden cutting board.

With a blade curved upward like a smile and a handle on each side, it moves back and forth through a heap of ingredients with the meditative sway of a rocking chair. The mezzaluna simultaneously chops and mixes with an effortless downward roll—using gravity unlike traditional knives that slice straight down in one direction. The two-handed grip allows for easy pivots here and there to catch any wayward items.

It’s not commonplace to see busy restaurant chefs preparing mise en place with a mezzaluna, but at fast-casual salad emporiums like Chopt, assemblers speedily work them through piles of leaves and toppings before serving. And for many home cooks, it’s a wonderful companion that comes without risk of injury, since both hands are always at ten and four o’clock, steering the blade through a garden’s bounty.

Flavia Bernabe, an Italian cousin of mine who lives in Sardinia, has witnessed the mezzaluna glide its way through mounds of herbs for generations. “I have always seen it used by my mother and many other family members, and I’ve had mine for 50 years,” she says of the heirloom.

With it she chops prosciutto cotto and tosses it into tagliatelle, tops seafood dishes with herbaceous confetti, and puts the knife to use when making party snacks like crostini. For one of her favorite recipes, she assembles black olives, capers, anchovy fillets (in oil), basil, and “a lot of” a occhio (diced tomatoes). “I tried to use the electric chopper, but it doesn’t do a good job,” she says. “The herbs remain crushed and not minced.” A food processor’s tornado blade pulverizes its ingredients into an unrecognizable state, whereas the teeter-totter technique of a mezzaluna gently releases the aromatics and leaves each item unbruised and with an identity of its own. Rather than turning everything into a brown mulch, as a food processor might, the mixture is closer to freshly cut grass—aromatic and bright green.

I received my mezzaluna from another Italian cousin who, because we’ve been told it’s bad luck to gift knives, has allowed me to “borrow it” for the past 15 years. She purchased it at a flea market in Florence, and I presume it graced the hands of a nonna who once oscillated her way through the base of a pesto. That fantasy brings a certain gusto to my mincing and allows me to fall into a comforting daydream while my blade allows me to make my way toward the perfect basil vinaigrette or tabbouleh.

Mezzalunas started rocking (even disrupting) the knife industry in the 1700s, when an imaginative Italian man yearned for an easier way to swiftly cut herbs and vegetables. Today, a version with an elongated blade is used to ease the task of cutting through Chicago deep-dish pizzas. My father has adapted this technique with my mezzaluna, using it to slice thin-crust DiGiorno on a lazy Sunday.

When searching for a mezzaluna of your own, you’ll learn double blades are easier to find (Williams Sonoma for $39.95). Doubles, however, require careful attention during cleanup; dried fruits can stick to the inside; and it takes up a little more space. Either the single or double can be used for chopping nuts and herbs, though the single blade (Amazon sells a 6.75-incher for $6.95) is best for dried fruits and raw meat preparations, such as tartare. In French, the knife is referred to as a hachoir, which translates in English to “meat mincer.” Not as charming as the night sky.

When farmers markets bloom with the fragrance of mint, marjoram, dill and basil, I pile them atop each other, give them the mezzaluna treatment, and sprinkle them onto roasted summer squash. Flavia encourages that you always keep the blade sharp using a handheld knife sharpener, “or the herbs will be squashed and their juice wasted.” A loss that would turn any smile upside down.

Danielle Bernabe is based in Los Angeles and prefers walking over driving. She covers food, travel, and wellness with bylines in Conde Nast Traveler, National Geographic, and Los Angeles Magazine.