Get a free recipe
Subscribe
Icy Cherry Piraguas Are Air Conditioning You Can Eat
By: Bianca Cruz 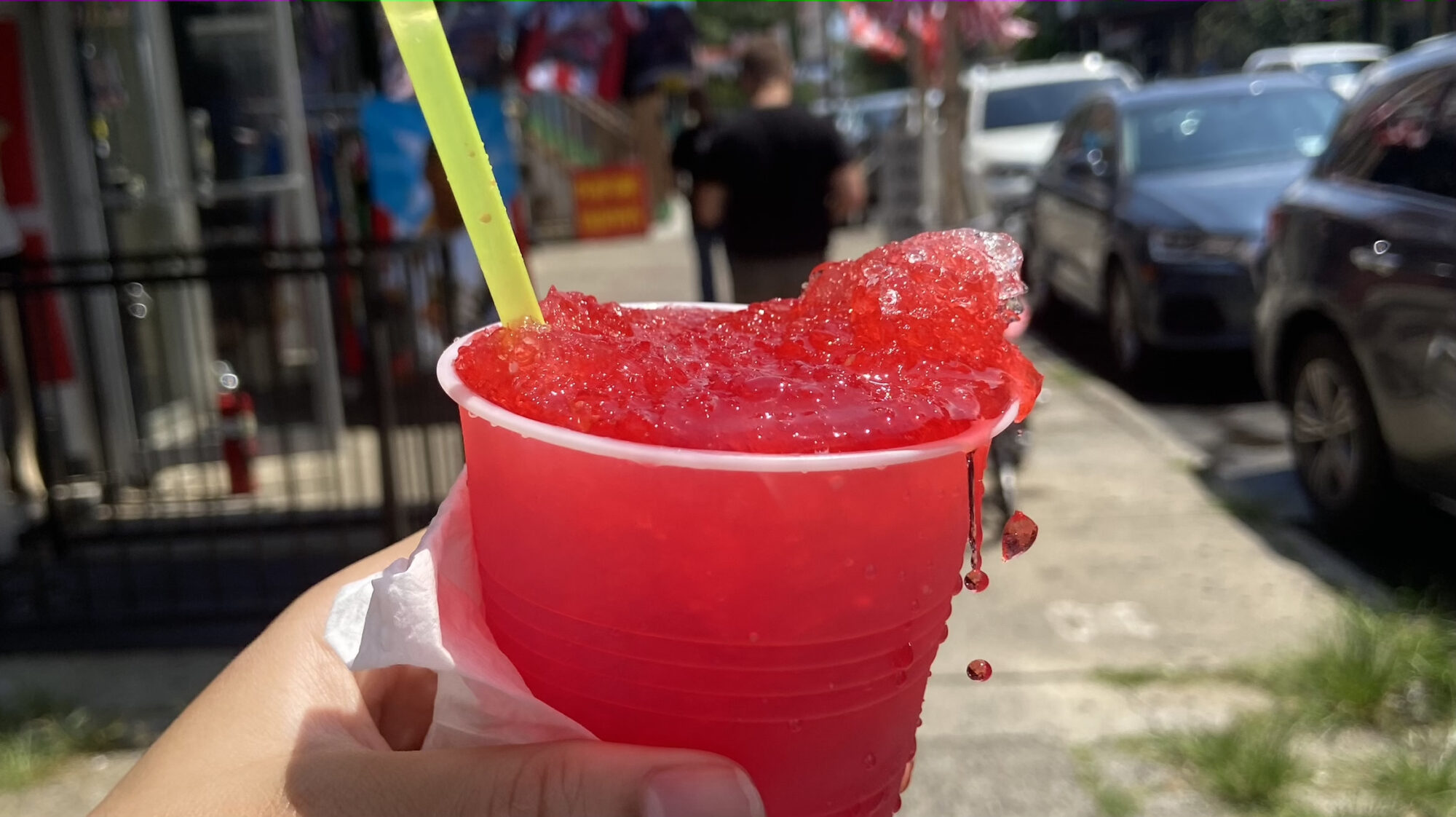 Water, sugar, and a 50 cent Kool-Aid packet is all you need for this Puerto Rican cooler.

As a child, I’d spend many summer days playing with friends in the parks around my Brooklyn neighborhood, closely guarding the $5 my mother told me not to lose. While some of it would be spent on sunflower seeds or a slice of pizza, I’d always reserve at least one of those dollars for the beloved piragua man. Although they’re just crunchy bits of shaved ice with a candy-like flavoring, piraguas have the power to cool you off on the hottest of days.

Once Memorial Day hit, the piragua man would roam the streets with his cart filled with flavored simple syrups in glass bottles with pour spouts and an enormous block of ice (which somehow never melted, even when pushed above scorching asphalt for hours). I’d keep an eye out for his large rainbow, sun-blocking umbrella and listen for the clown horn he’d squeeze to announce his arrival. Seemingly coming from out of nowhere, dozens of children and their parents would swarm around his cart with their dollars ready. I’d shove my way through, catch his attention, and watch the magic happen.

You can’t get a piraguas from a grocery store freezer aisle—only from the speedy, efficient vendor. This frozen cup has roots in traditional Puerto Rican street selling and has been found in cities like New York City and Miami after the Great Puerto Rican Migration in the 1940s. Older Puerto Ricans will refer to the piragua man as a piragüero—a title only given to skillful merchants. 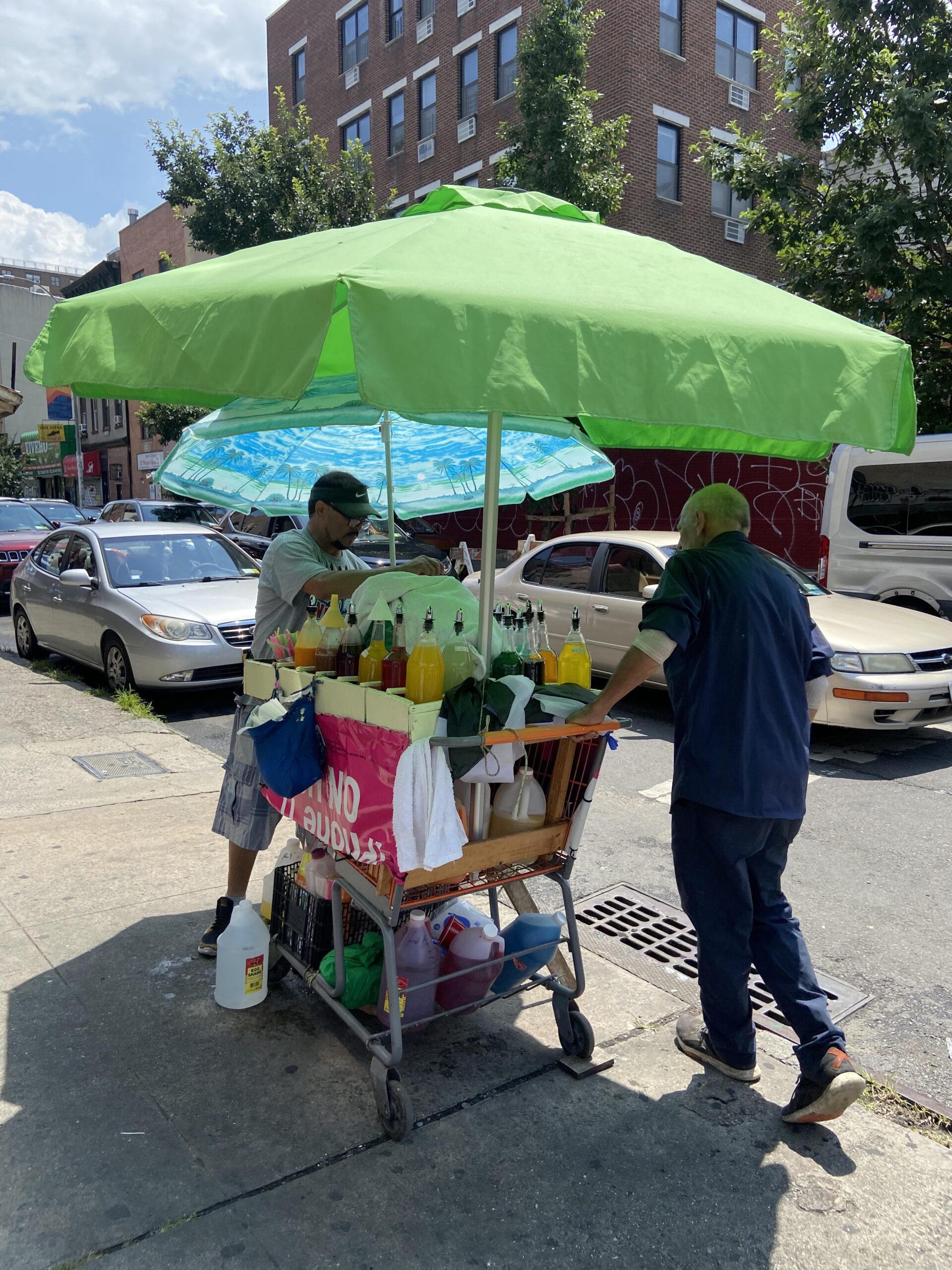 First, the piragüero will take a special, hollow metal tool, which is shaped like a diamond fitted with a blade, and scrape the giant block until the freshly shaved ice fills an eight-ounce plastic cup. Then you name your flavor of choice. My favorite options were usually tamarind, passionfruit, and cherry. I’d point at the fluorescent cherry and ask him in my best Spanish, “Cereza por favor?” He’d pour enough of the bright, tart liquid to fill up two-thirds of the cup and add extra ice atop to form the signature piragua cone shape. Then he would masterfully add just enough syrup to flavor the remaining bit of ice without it losing its iconic shape. I’d prance away with my icy prize and celebrate my sticky hands with my friends.

I can tell quite a bit about someone by what piragua flavor they’d get. Melon was for undeveloped palates, while cream was typically for older customers and Puerto Rico natives. Whether it be coconut cream, grape, or lime—you name it, the cart had anything you could think of—my heart always belonged to cherry. I oftentimes find myself dreaming of those sun-soaked days of childhood and instantly crave a piragua—but how to make one without leaving my apartment, since piragüeros are harder to come by these days? With piragüeros going into retirement and younger generations failing to pick up where they left off, piragua carts are becoming scarce.

“Piragua” loosely translates to “water pyramid” and was given its name because of the packing technique vendors use (oftentimes with a small funnel) to compact the ice, producing a sturdier final product. My recipe for homemade piragua only requires three ingredients. I found that unsweetened Kool-Aid packets make for the best synthetic-ish flavor when combined with a simple syrup. The industrial red flavoring was never reminiscent of the freshly picked fruit, which was perfectly okay. It needn’t be “enhanced” or “improved” by making fresh cherry syrup. The frozen treat works as is, and trying to modernize it would be an injustice to all piragua lovers. Instead, an equal amount of sugar, grainy ice, and your favorite Kool-Aid is all that’s needed to make a cooling summer delight.