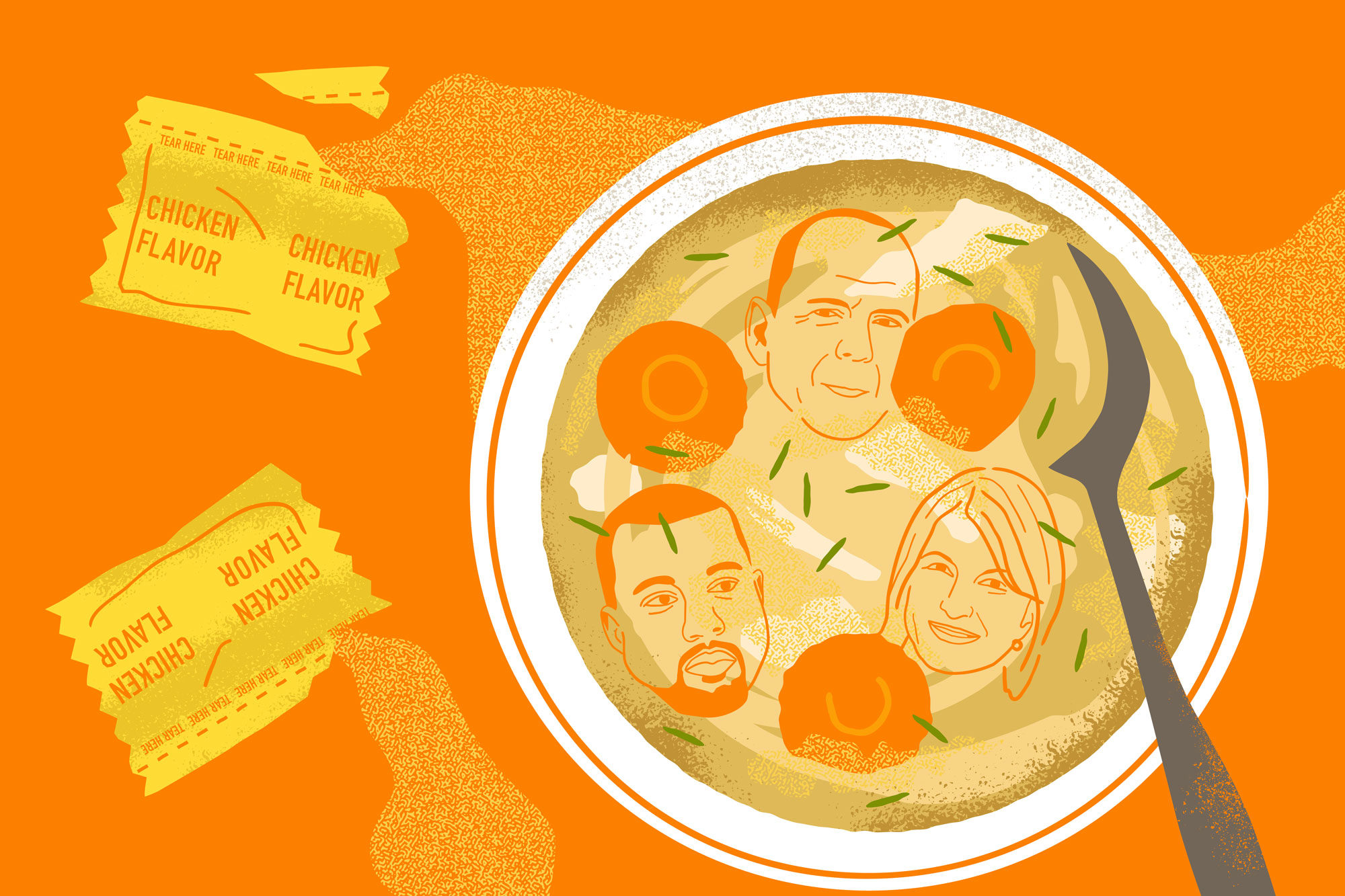 That ramen flavor packet has a legit place in your kitchen.

In the mid-aughts, I worked my way up to the title of sous chef at a pretty fancy-pants restaurant in Manhattan where we wore white chef pants and white aprons that we weren’t allowed to get dirty, even though the kitchen was in a windowless basement, safely sheltered from the eyes of the public. The dining room had views of the Hudson River and carpets that were replaced with alarming frequency. The food was a little French but used ingredients from all over the world, particularly from Japan.

We deboned rabbits and rolled them up—stuffing them with kanzuri, a fermented yuzu and chile paste—later cooking, slicing, and serving them with edamame puree. We breaded chunks of tuna with crushed-up Japanese rice crackers and fried them until the outside was crisp and the inside was still raw.

In addition to all the rabbits and chile paste, we used chemicals with scientific-sounding names like transglutaminase, which is an enzyme used to glue meat together, and sodium alginate, which, in conjunction with calcium chloride, can turn liquids into gels that still have liquid in them, creating what looks like an egg yolk but is actually a ball of passionfruit puree.

It was at this restaurant that I first learned about how MSG works with other ingredients. I also learned that when it’s used with too heavy a hand, it can make virtually everything taste like instant ramen noodles—which is not necessarily a terrible thing, but it’s probably not what you want the food at a fancy restaurant to taste like.

I had been eating MSG (and its glutamic relative, DSG, or disodium duanylate) my whole life in the form of Doritos, the bouillon cubes my mom added to fortify her chicken soup, and my favorite: instant ramen noodles. My sister and I ate instant ramen most days after school while watching DuckTales in our living room in Ithaca, New York, and I would usually pour off most of the water from the pot but still add the whole flavor packet, because I needed it.

So years later, in the restaurant kitchen, when I was introduced to a white, powdery product called Nucleotide IMP, I was pumped. It’s not MSG, but it is one of MSG’s closest relatives—an amino acid that boosts umami flavor, just like MSG does, but one that is found naturally in protein. It’s used in a number of processed foods, often in conjunction with MSG, and it made its way onto the menu of the restaurant I worked at in the form of a lime- and dill-infused chicken broth full of pretty carrots and parsnips and little bits of perfectly cooked chicken.

Each bowl of soup contained a small fraction of a gram of the powdery mix, and the effects were subtle, but it added an unmistakably richer, meatier quality to the dish. In my time there, I made bowls of it for Martha Stewart, Kanye West, thousands of regular customers, and Bruce Willis, and in a way, it was like they were sitting in my living room watching DuckTales and eating ramen noodles with me.

When I was introduced to a white, powdery product called Nucleotide IMP, I was pumped.

It was also my job to order the Nucleotide IMP, which we bought in powdered form, by the one-kilogram bag. We got it directly from Ajinomoto, the Japanese company founded by Kikunae Ikeda, the scientist who figured out how to extract MSG from seaweed and who is credited with discovering (or at least giving a name to) umami.

One time, when I called to order some Nucleotide IMP, the Ajinomoto sales rep told me about a new product called Koji-Aji (not to be confused with koji, a product made by introducing fungus to steamed grains or beans), a combination of yeast extract, fermented wheat gluten, and maltodextrin, that they claimed would create the next flavor sensation: kokumi. Allegedly, this new product would instantly replicate the flavor of that same food having rested in the refrigerator overnight—that coveted stew-on-day-two effect. I had them send me a sample, and I quickly learned that it just made everything taste a little bit like French onion soup.

While I’m not likely to invest in a bulk quantity of Koji-Aji or Nucleotide IMP for my home kitchen anytime soon, I have always found a huge amount of joy in channeling some of their qualities with soup flavor packets: ingredients that are engineered to make water taste like dinner. I will often make my own broths to cook instant ramen noodles in and save the flavor packets to season vegetable stews, pork chops, or really anything that wants a little extra umami—when used with a light touch, they can have an amazing effect.

Beans are a creamy, starchy canvas for all kinds of flavors, but most pots I make contain some combination of onions and carrots, and when they’re really good, it’s usually thanks to a packet of Lipton onion soup mix. The mix is profoundly oniony, containing both dried onions and onion powder, with a little sugar and dehydrated soy sauce to make sure you’re paying attention. A tiny bit of cornstarch in the packet gives your bean broth the right amount of body, and a bit of DSG makes it taste like you cooked it yesterday, let it sit in the fridge overnight, and then heated it up just in time to watch old episodes of Law & Order: SVU.

Tyler Kord is the pretty good chef of No. 7 and No. 7 Sub and sometimes he writes books like Dynamite Chicken and A Super Upsetting Cookbook About Sandwiches. He likes cooking beans and has a daughter named Barbara who does not like to eat them.