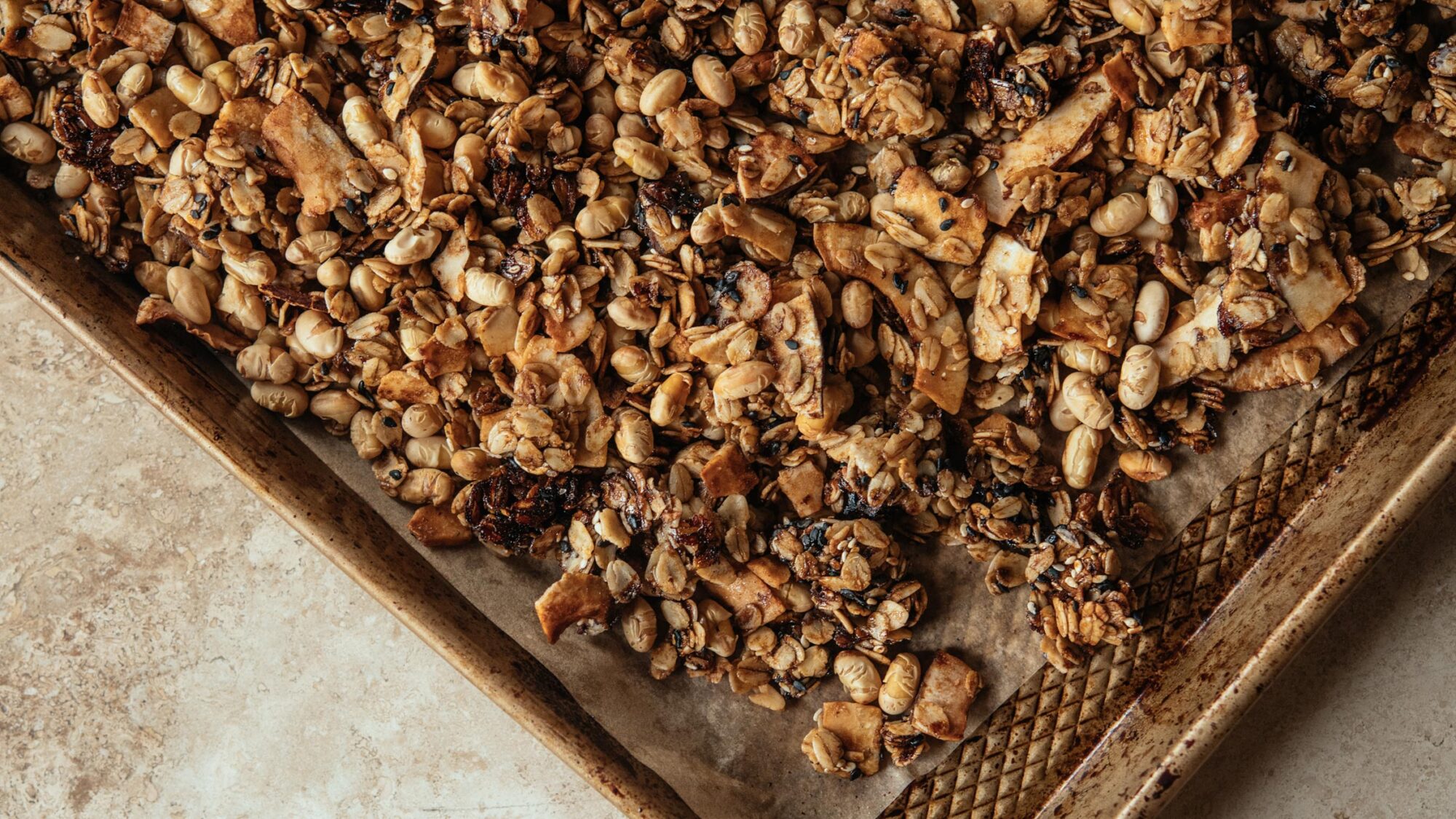 Japanese and American appetites are converging around a love of granola.

Last spring, when a cousin came to visit me in Brooklyn from Tokyo, one of her top priorities, puzzlingly, was to drink a matcha latte. I brought her to a wellness-millennial watering hole called Cha Cha Matcha in Manhattan, where I told her that the brand’s origin story included the founders’ pilgrimage to Japan in the summer of 2015 to “discover the source of truth for all things matcha.” She laughed, drank the latte, and declared it “very American.”

Thanks to the internet and a few centuries of cultural exchange, what makes something American or Japanese is increasingly hard to define. Take granola, an American health food consisting of baked whole grains (usually oats) and other high-fiber mix-ins that dates back to 1863. Now it’s being remade in paradoxically luxe ways with distinctly Japanese ingredients. Few Americans would be surprised by a bag of black-sesame-flavored granola on the shelves of Whole Foods. But what about Monterey Granola, a pistachio-and-macadamia-forward flavor on sale at the Tokyo granola shop Good Morning Tokyo, so named to evoke the feeling of standing on the beach on California’s Central Coast? It would also seem that making American-style granola is quintessentially Japanese.

Japan has a long history of adapting foreign foods to suit its palate—including tempura (from Portugal), ramen (from China), and strawberry shortcake (from the United States). An entire Western-inspired cuisine, yōshoku, sprang up in the Meiji era at the turn of the 20th century. And about a decade ago came the Japanese granola boom, when the cereal leapt in market value from 4.9 billion yen in 2010 to 14.6 billion yen in 2013, according to the Japan Times.

The reasons for granola’s popularity in Japan stretch far beyond the allure of California. They include a combination of factors, among them Japan’s sometimes unhealthy obsession with health and weight, especially for women (granola is perceived as both a diet food and a delivery system for dietary fiber); the country’s growing reliance on convenience and packaged foods for time-strapped workers and parents; and its enthusiasm for Western-style baked goods.

Although a dizzying variety of granola is now available at Japanese supermarkets and konbini (convenience stores), none is more iconic than Calbee’s Frugra—a popular brand from the Kellogg’s competitor.

Whatever the reason, it’s no longer unusual to see “gura” (granola) on the menu at cafés—where it may be served on yogurt, milkshakes, smoothies, salads, and soups—or presented as a gift. Kashiya Shinonome, a Western-style bakery in Taito, Tokyo, offers pretty packages of granola with unique combinations of seasonal dried fruits, like lemon, orange, and fig, alongside slivered almonds and pumpkin seeds. And the specialty granola brand Ganori (tagline: “The Best Gift from Tokyo”) has collaborated with Saga prefecture to showcase local produce, like Sahonoka, a strawberry unique to Kanzaki.

Although a dizzying variety of granola is now available at Japanese supermarkets and konbini (convenience stores), none is more iconic than Calbee’s Frugra—a popular brand from the Kellogg’s competitor. Arguably the brand of granola that launched the trend, Frugra—an elision of “furūtsu” (fruits) and “guranora” (granola)—was introduced in 1991, but it didn’t become a phenomenon until about a decade ago. It has a lightly crunchy, airy texture thanks to puffed rice and freeze-dried apples and strawberries alongside dried papaya, raisins, coconut, kabocha seeds, and, of course, oats.

“When something becomes popular in Japan, everyone knows,” says Nami Hirasawa Chen, the Japanese-born author of the food blog Just One Cookbook. Chen had moved to the United States by the time the Frugra craze hit, but she became hooked after a trip back home. “My mom jumped on the Frugra wagon, and one summer, when we were back, we learned about her ‘new favorite cereal.’” After schlepping bags of Frugra back in her luggage, Chen decided to make her own copycat recipe for the blog—featuring dried apricots and freeze-dried apples and strawberries.

“When something becomes popular in Japan, everyone knows.”

“I’ve been a big fan of Calbee granola since 1998,” says Ayako Kurokawa, the Japanese-born pastry chef behind the café and bakery Burrow in Brooklyn, who grew up eating it. Kurokawa is known for her impeccable, French-influenced creations, but one of the first items she developed for the shop was cherry granola, which she still sells. Tart and perfectly crunchy, with a nutty toasted flavor, it has a distinctly Japanese lightness. She sweetens it with French vergeoise sugar, the closest thing she could find to tensaito, a Hokkaido brown sugar made from beets.

“The cherry granola is the only recipe we measure by volume, not by weight, which makes it more American than Japanese!” Kurokawa jokes. In Japan, as in the United States, specialty granolas are more likely to use wet sweeteners like maple syrup or honey, which tend to yield a more robust, toothsome texture than Calbee. At least some of these are attracting cult followings among a young, affluent, wellness-minded set. Mirei Yamagata, a Tokyo-based writer and interpreter, says her favorite is made by Doctor’s Design Plus + and includes chia seeds and almonds. Developed by a fiber-evangelizing doctor, it’s only available from a small shop in Tokyo’s fashionable Roppongi neighborhood. “It doesn’t use sugar, and the ingredients are really fresh,” she says. “It has a really nice, kind of toasty scent.”

It’s in this wellness zone where American and Japanese granola starts to converge. In the States, a long-standing affinity between health food and Japanese cooking has evolved into a new New Age of luxury elixirs and superfoods. Japanese culture, meanwhile, has a habit of crediting certain ingredients with above-average health benefits (my Japanese uncle, a former smoker, has recently become obsessed with beans).

“I had all these leftover soybeans and I thought, ‘What could I do?’ And I said, ‘Oh, I can throw it in my granola!’”

Los Angeles–based author Sonoko Sakai’s new book, Japanese Home Cooking, features a recipe for black soybean granola. The recipe was born of a desire to make a snack that would not only taste Japanese but also showcase beans, a food group Sakai feels is underappreciated in America. “I was roasting soybeans for Setsubun, the [winter] festival where you throw soybeans out of the house to bring good luck in and rid it of evil spirits,” she recounts. “I had all these leftover soybeans and I thought, ‘What could I do?’ And I said, ‘Oh, I can throw it in my granola!’”

Although most Japanese granolas still hew to an American-style flavor profile of oats, nuts, and dried fruit, many recipes also incorporate soybeans and matcha, as well as ingredients that “may not register as Japanese immediately,” observes Makiko Itoh, the Japan-born author of the long-running food blog Just Hungry. That includes pressed barley (oshimugi), dried goji berries (kuko no mi), dried figs (ichijiku), and buckwheat (soba).

Even America’s savory granolas tend toward a Japanese flavor profile. In 2015, Heidi Swanson, the San Francisco–based blogger and cookbook author, published a recipe for savory granola with nori in Near & Far: Recipes Inspired by Home and Travel. And though it wasn’t deliberate, Alison Roman’s Decidedly Not-Sweet Granola from her first book, Dining In, might also be categorized as Japanese-adjacent, with its ample use of buckwheat groats (soba), sesame seeds, and soy sauce. “I used the soy sauce for salty savoriness as well as a deep sort of molasses-y quality it takes on when roasted,” she says. “There aren’t a ton of other ingredients that compare in that department.”

Granola has always been aspirational, from its moment as a health reform food in the 1860s to its time as a breakfast for the counterculture in the 1960s. So it’s no wonder that it’s become a canvas onto which we can map all kinds of yearnings, whether that be travel lust for Tokyo or Monterey, or simply fitting more beans into our diets. The surprise is not so much the aspirations but their convergence into something uncannily familiar. Even in a foreign land, seeking out a novelty food can be like looking through a door only to discover it’s a mirror.

The next time I visit Tokyo, I’ll ask my cousin to take me to try the granola.