Get a free recipe
Subscribe
Give Your Dumpling a Crispy Skirt
By: Tatiana Bautista Photo: TASTE 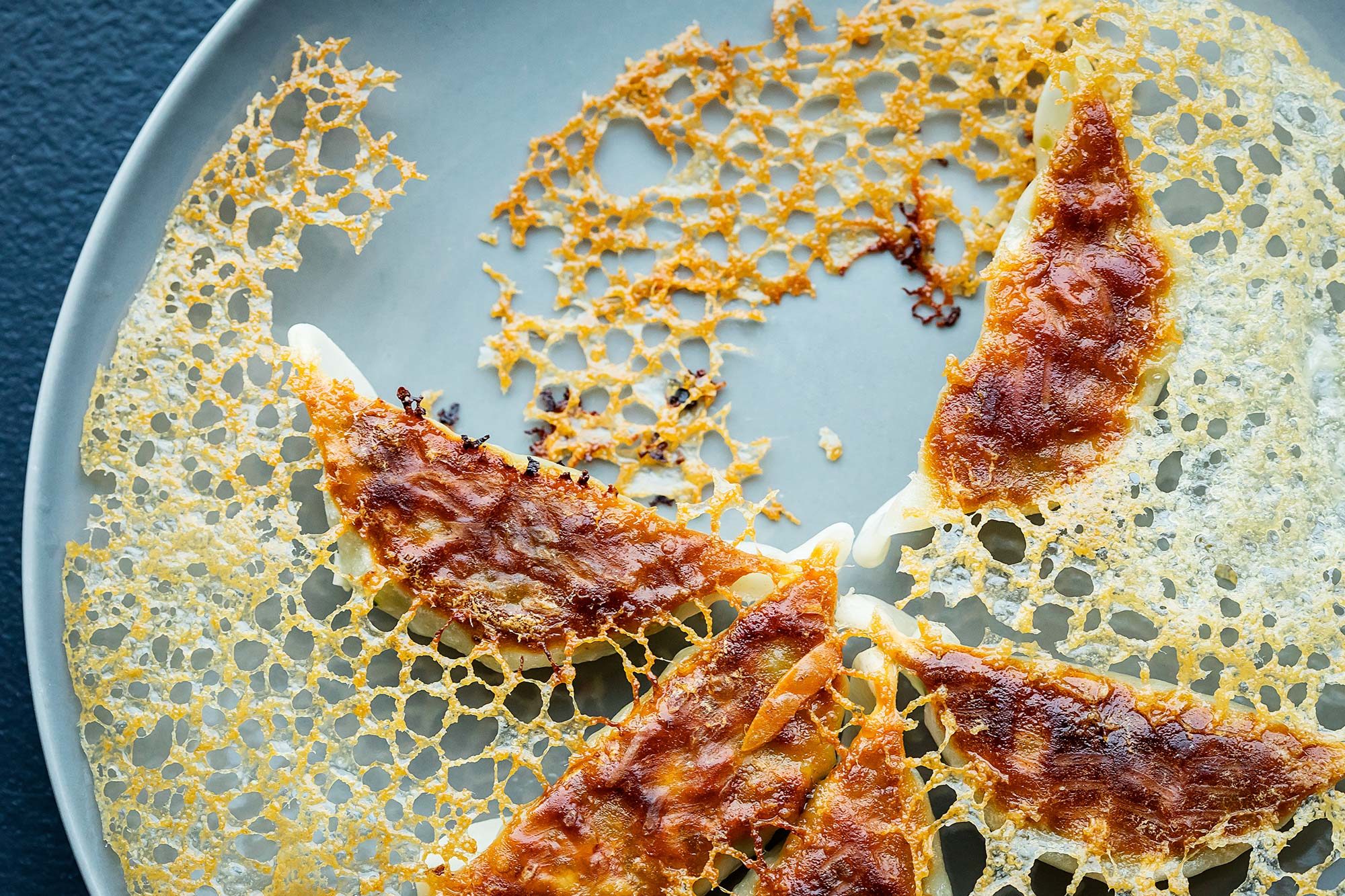 A two-ingredient trick transforms your frozen dumplings into an izakaya-worthy dish.

Dumplings, fried until golden, are perfectly fine—there’s a balance of chewy skin and crispy edges, and all is right in the world. But if you dress your dumplings in a golden-brown skirt that forms at the bottom of the pan they’re frying in, they’ll be infinitely better. That tuile-like layer of starch that connects a skillet full of dumplings adds another dimension of delicate, brittle crunch that extends beyond the dumpling skin itself—and why would you deny yourself extra crispy square footage?

Popular at izakayas throughout Japan, served alongside whisky highballs and pints of Asahi, they’re listed as hanetsuki gyoza (gyoza with wings) on menus or sometimes called binghua jianjiao (ice-flower fried dumplings, referring to their appearance) at Chinese dumpling shops. But the allure of a crispy dumpling skirt isn’t exclusive to restaurants.

It’s actually doable at home, and even easier with a package of frozen dumplings. And if you’re like me, there are always a few bags of emergency dumplings (likely a mix of pork-and-cabbage-filled pot stickers and gyoza from Wei-Chuan, Ajinomoto, and Prime Food) sitting in the freezer for when the cravings—or lack of groceries—call. For the dumpling skirt itself, a trustworthy nonstick pan is absolutely necessary, plus hot water and all-purpose flour (or your starch of choice) for the batter. Cornstarch, potato starch, and rice flour work just as well and yield a lighter type of crispiness compared to the harder crunch that all-purpose flour creates.

If you’re used to the steam-fry hybrid technique whereby you cook your dumplings for two minutes, then add some water so they finish cooking with steam, then you’ve already mastered half the process. To add a lacy skirt to your pan of dumplings, just replace the water in that last step with a slightly thickened mixture of flour and hot water (two teaspoons for every 1/3 cup), then pour it over the dumplings before covering the pan with a lid. After five minutes on medium heat, the lid can be removed so the remaining water evaporates, which leaves behind footprints of the bubbling slurry that transforms into a crunchy layer of skin. Served upside down on a plate, that beautiful browned coating gives way to a satisfying shatter with the poke of a chopstick, ready for a dunk in a blend of soy sauce, sesame oil, and chile flakes.

In all honesty, I’ve made these crispy-skirted dumplings with varying success—it does require a bit of practice. Beyond technique, a really good nonstick pan will make the biggest difference, and a final drizzle of sesame oil over the skirt will help finish off any lingering bits of watery batter. Sometimes I’m lucky, and the whole sheet of dumplings slides off the pan in one go, and the entire structure stays intact. And sometimes my spatula slips, and that perfect eight-inch round of crispy lace gets broken before it hits the plate. Whether it’s Instagram-perfect or not, you’re still left with a dish full of crispy dumplings.

RECIPE: Dumplings With a Crispy Skirt