Get a free recipe
Subscribe
What Can’t Fennel Do?
By: Leela Punyaratabandhu Photos: Lizzie Munro 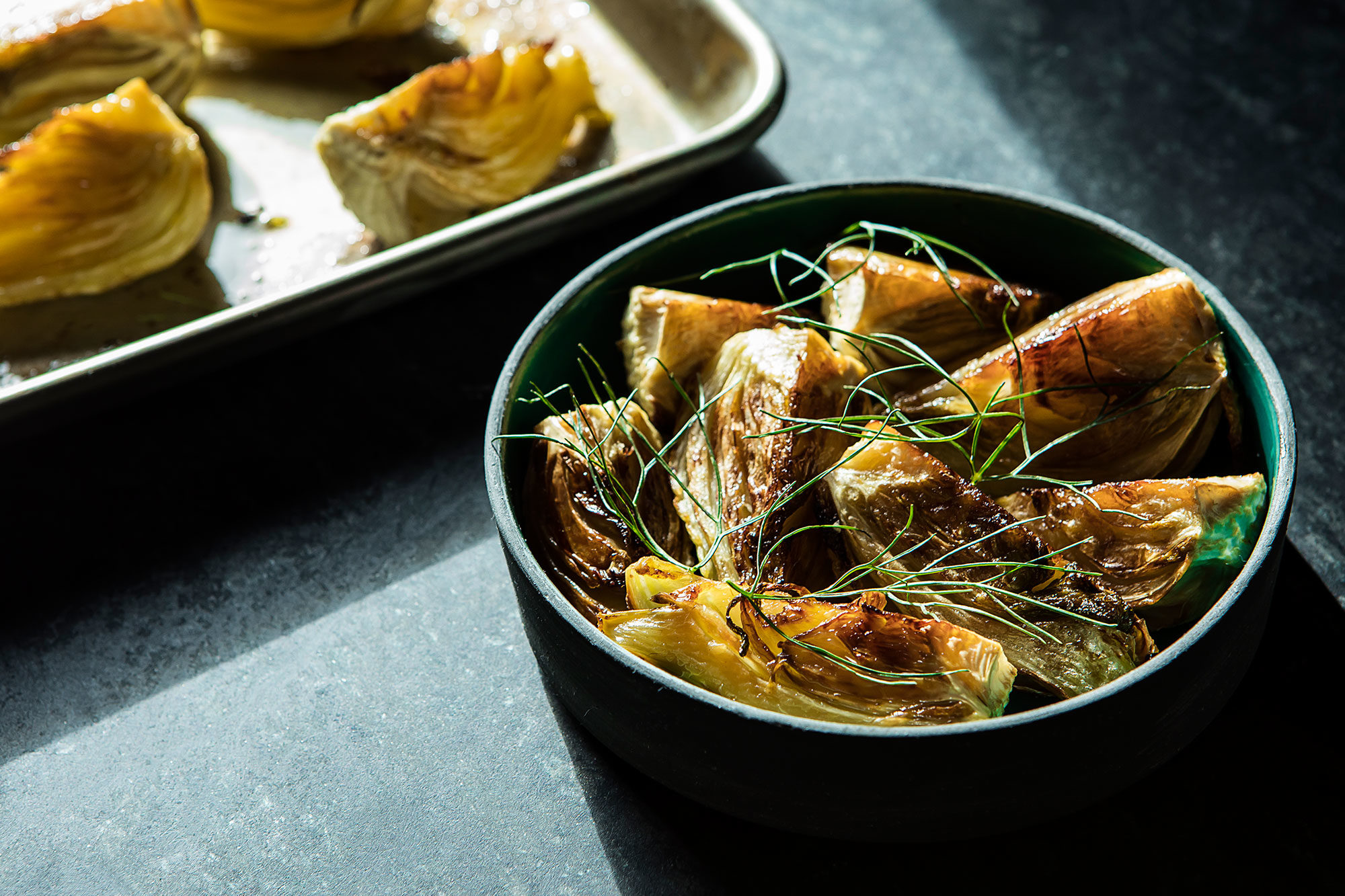 From seed to frond, pollen to bulb, fennel is the vegetable kingdom’s true utility player. And it deserves your respect.

People don’t squeal at the sight of fennel—at least not the people who shop at my neighborhood supermarket in a Chicago suburb.

And I get it: Supermarket fennel isn’t the most comely. When Kit Marlowe soliloquized the face that launched a thousand ships, or when Lord Byron murmured of an entity that walks in beauty like the night of cloudless climes and starry skies, they probably hadn’t been inspired by a fennel bulb.

Mary Shelley, on the other hand, might have been. There’s something Frankenstein-esque about a chubby orb with long, stiff stalks—tubes of various circumferences—shooting out of its top in a manner that lacks any obvious principle of organization, only to conclude with the bluntness of a song ending mid-sentence without an outro. The lacy tufts of fernlike fronds at the base joints of the stalks seem a tone-deaf attempt to shoehorn a touch of elegance into the overall lack of graceful proportion.

No wonder when a fennel bulb walks by a playground, young children hide behind their parents.

Mollie Katzen, the author of The Moosewood Cookbook and the more recent The Heart of the Plate, thinks the vegetable’s lack of popularity is precisely due to its gaudy, awkward anatomy. “People get anxious when they perceive an ingredient as requiring great knife skills,” she says.

Bryant Terry, the author of Afro-Vegan and the forthcoming Vegetable Kingdom, agrees. “From conversations I’ve had with folks, there are two major barriers to incorporating more fennel into their meals,” he reveals. “Not knowing how to prepare it, and the perception that fennel has a licorice taste.”

Licorice—the black candy that has crushed the spirits of little ghouls and created frowns among the perkiest of tiny superheroes all through the history of trick-or-treating? Licorice—the flavor most associated with cold and flu medicine? In fact, both Katzen and Terry independently cite the licorice factor as the reason why fennel hasn’t been adopted among American home cooks as widely as other once-foreign vegetables, like bok choy, daikon, bean sprouts, and napa cabbage.

Fennel’s PR rep has had their work cut out for them. Even I, who came to the United States with little experience with fennel, fell victim to the negative press and preemptively developed a distaste for it. But the supermarket picture is neither fair nor complete. I hadn’t realized that until I took a trip to a friend’s fennel farm, located a couple hours northwest of Chicago, where I experienced the vegetable for what it truly is for the first time.

Fennel, whole and observed in situ, is exquisite—a field of green filigree crowned with golden inflorescence, looking like it could be floating, had it not been anchored with strong, rotund bulbs. I pulled a couple off the ground and realized that fennel had looked so strange and disproportionate in the supermarket because they always show up there with their stalks trimmed off halfway. Apparently, packing whole fennel plants—bulb, stalks, leaves, and blossoms—in boxes and transporting them across the country is like transporting a herd of giraffes in a VW Beetle. Trimming them down as much as possible is a way of making them more compact, less unruly, and, hopefully, less intimidating to consumers. Ironically, the procedure that’s meant to beautify the fennel plant ends up suppressing its beauty and limiting its usefulness.

A whole fennel plant is supermarket fennel in the transfigured state—full of promising potential. Shoppers curious enough to pick up a bulb of fennel, finding themselves equally disquieted and enticed by the unfamiliar, would do well to remember that when Robert Frost found himself at a place where two roads diverged in a wood, he took the one less traveled by, and that made all the difference.

Here are some of the treasures laid up on that road.

Sliced paper-thin, the bulb makes a crisp, clean-tasting salad. When Terry discovered fennel for the first time at a restaurant in Milan, it was served as a salad with slices of blood orange and drizzled with a simple dressing of vinegar and olive oil. He has been making that salad to this day. Katzen rhapsodizes about her first time eating fennel bulb, lightly dusted with flour and deep-fried into ethereal fritto misto, served with a squeeze of lemon.

The bulb is also a solid performer when wedged, anointed with a touch of olive oil, and oven-roasted in a sheet pan. This is the side dish of your dreams—caramelized, creamy, dulcet.

The seeds can be toasted or lightly pan-fried. Used in bread pudding or to top cooked rice furikake-style, they add flavor and crunch. Toasted in a dry pan and ground, not only do they bring character to anything from fish to meat to vegetable dishes, they also perk up any store-bought curry pastes.

Fennel’s PR rep has had their work cut out for them.

The stalks can be added to the next batch of your homemade stock. Sliced thinly crosswise to render the fibers running along the length impotent, the resulting crisp coins of flavor gladden the hearts of any salads, soups, or stews you add them to.

Roughly chopped fennel fronds blanketing a side of salmon or nestling inside the cavity of a sea bass before roasting or grilling are a beauty untold. How about gathering what’s left of the fresh fronds, making pesto with them, and serving that with the aforementioned fish?

The crowning glory of fennel, however, could very well be its pollen—the essence of fennel concentrated into dust of gold. Use it for its bright, summery flavor—the violin, if the seed’s the cello—as a seasoning, or add it to a spice mix or a steak rub.

Fennel, as I’ve come to learn, punches above its weight. And maybe the best way to showcase fennel—to get people to see, use, and recognize it in all its benevolent glory—is to leave it whole. In fact, if we lean in close to the fennel bulbs at a grocery store, we may hear our mutilated hero’s silent cry for justice.

Leela Punyaratabandhu is the author of Simple Thai Food and winner of the Art of Eating Prize, Bangkok. Epicurious has named her one of the 100 greatest home cooks of all time.