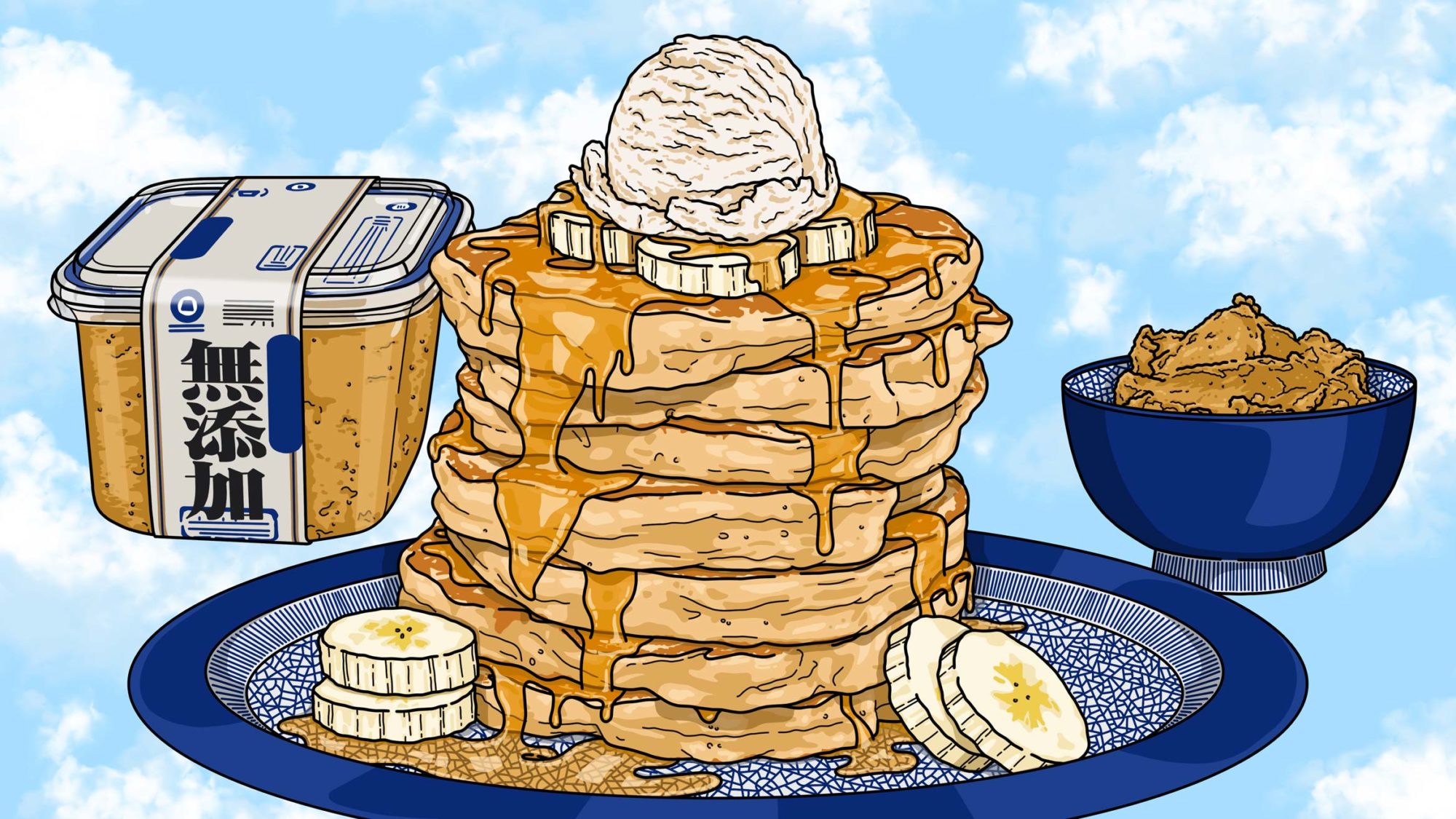 My refrigerator has a designated spot for a container of miso, up there with a hunk of Grana Padano and jar of baechu kimchi. The golden fermented soybean paste has always been there for me, even when inspiration is lacking. The mellow, yet tangy, expression of umami never gets old for me. When whipped with butter, it plays off the subtle tartness of the dairy—bringing grilled cheese up an octave and rescuing routine roasted vegetables. But miso’s smooth, peanut-butter-like consistency makes it a prime player in experiments with cake batters, caramels, and beyond.

“It almost has the effect of sea salt or caramel, adding a salty and rich creaminess,” says chef Maiko Kyogoku of miso’s role in desserts. At Kyogoku’s homey Japanese restaurant, Bessou, in New York City, bananas-foster-inspired hotcakes are served at brunch and finished off with white-miso-flavored ice cream on top. The familiar, roasted taste of flambéed bananas cooled down with a scoop of ice cream is at play, cranked up by miso’s unmistakable savoriness.

A touch of miso to accent your batters and creams achieves a similar end goal to Maldon-flecked chocolate chip cookies and salted-caramel budinos, but its singular fermented flavor brings out another dimension beyond merely salt itself. Think of it like the difference between using white sugar and molasses in the same gingerbread recipe. Taking a page from the wide roster of preexisting salty-sweet desserts, miso caramel is a no-brainer—just add two tablespoons of white miso after combining the hot sugar with heavy cream to give it a funky boost.

Given the various types of miso available, there is nuance among them, whether you’re buying from your local grocery store’s refrigerated section or sourcing it online. The darker the color of the miso, the longer it has fermented (typically two to three years), and therefore, it will have a more pungent, intense flavor—resulting in red (aka) miso. A shorter fermentation time (a matter of a month or two) yields a milder level of funk and salt, resulting in white (shiro) miso, which is prized for its subtle sweetness.

There is truly no “wrong” type of miso to deploy in your dessert, so long as you’re familiar with its taste. “In general, light-colored ones such as saikyo are milder and lend themselves better for baking or incorporating into a recipe. Infusing the right amount into a liquid base such as milk, cream, or butter works best,” says pastry chef Pichet Ong of Brothers and Sisters in Washington, D.C., who prefers to use it in dairy-forward desserts like semifreddo, cheesecakes, and butterscotch puddings. Ong still recalls the first miso dessert he debuted on the RM restaurant menu back in 2002 with chef Rick Moonen, which remains his favorite rendition—an apple tarte tatin drizzled with miso caramel and a scoop of white miso ice cream.

At dessert bar Patisserie Fouet in New York City, red miso’s sharpness comes to life in a miso-pistachio pound cake glossed with cashew cheese glaze—combining toasty, nutty, and earthy notes. “The flavor itself can be very subtle and complementary, or can also stand out and have a bold flavor,” says executive chef Yoshie Shirakawa. Shirakawa opts for the saltier red miso (sourced from the Hatcho region of Japan), which gives it an easily recognizable presence in the loaf that’s more outrightly savory than the average pound cake.

Above all, Ong advises tasting the miso by itself before incorporating it into desserts. “Some misos contain ingredients other than soybeans, such as seaweed, aromatics, or barley, that may not work with the product being made,” he warns. “Most also contain a heavy amount of salt that may throw the balance off.” This can be especially true with red miso, which he recommends pairing with more robust flavor profiles like pumpkin or chocolate. It’s worth getting to know your miso a little better, and your desserts will thank you.