Get a free recipe
Subscribe
How Many Chile Powders Does Your Kitchen Need?
By: Cathy Erway Photo: Peter Garritano for Occo 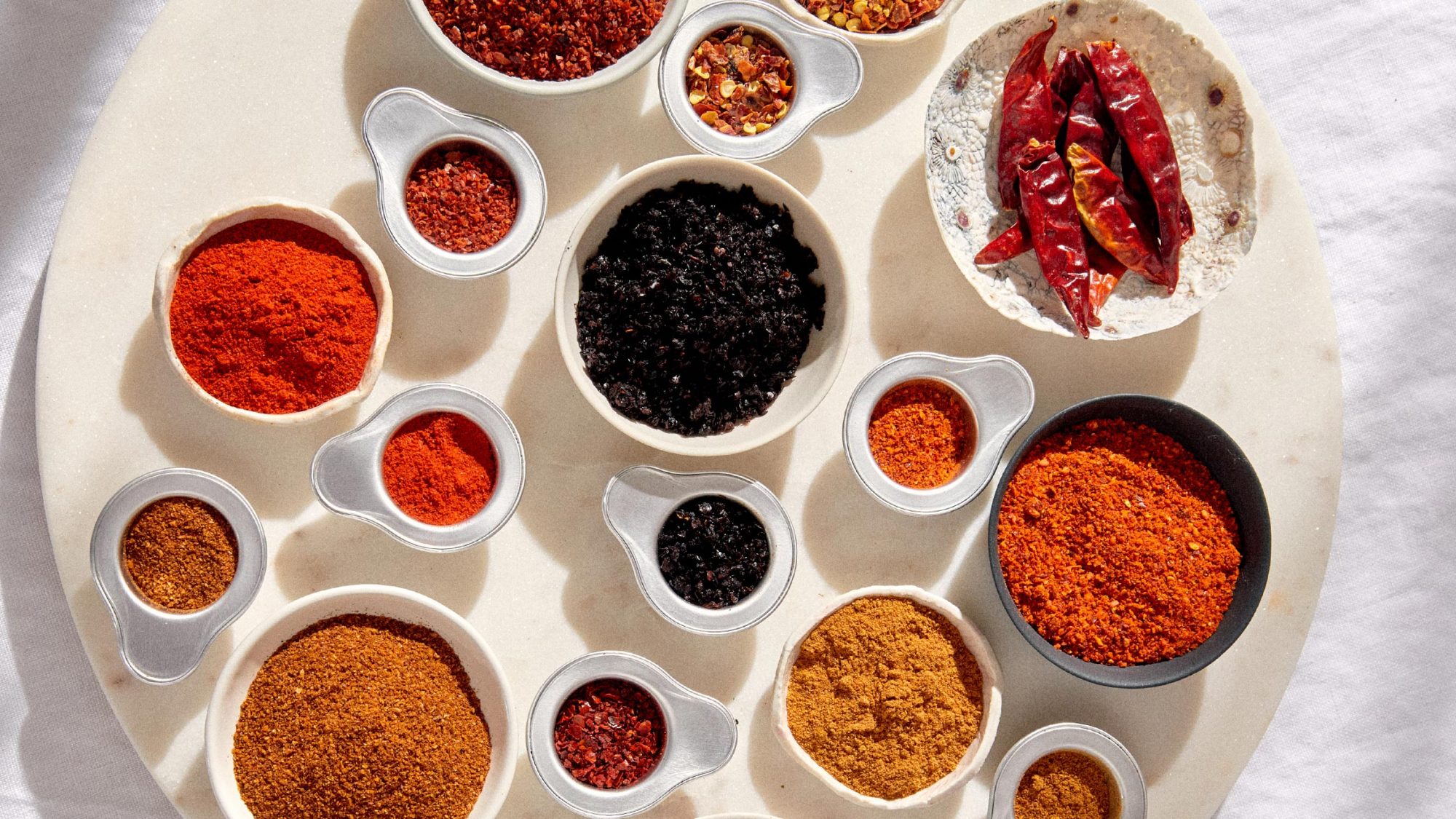 From cayenne to gochugaru, chile literacy has many rewards. One of them is realizing just how interchangeable and flexible these spices can be.

Years ago, I took a cooking class on Indian food. The instructor, Geetika Khanna, passed around her masala dabba and explained each spice in it to the class during her introduction to the cuisine. When she got to the vermilion dust in one metal cup, she made a stunning admission: hers was filled with the rather pedestrian cayenne pepper. This was her absolute go-to for any dishes that required finely ground chile pepper, which was easier to find than Indian chile powders—and besides, she liked its fruity flavor and moderate heat the best. I remember quizzical glances darting across the room like fireflies. Clearly, the suggestion didn’t sit well with everyone — how could this quintessentially American chile be used to season the batter for besan chilla, the savory chickpea-flour pancakes, or the marinade for chicken tikka?

Perhaps my instructor was onto something. Ground chile powders and flakes are beloved in basically every kitchen where water is boiled, and people have been breeding capsicum peppers for characteristics like heat level and color for thousands of years. A lot of this rich history and variation is boiled down to simply “chile” or “chili” powder in recipes, without specifying its varietal or provenance. But what winds up in a jar to use as a dried seasoning often has less to do with the type of capsicum seed than how it’s been harvested and processed from there. From the sun-dried and coarsely ground Korean gochugaru to the wood-fire-dried and smoky Spanish pimentón, there are many techniques and styles behind bringing on the heat that are practiced around the world. Just like the grapes that go into a wine, the formats in which chile peppers are appreciated, from region to region, is an expression of hundreds of years of culture. But some of those processing techniques—and some of those peppers—can be fairly similar, leading to confusion and abstraction.

For instance, cayenne refers to a group of long, finger-shaped capsicum that could have a variety of heat levels; they’re also enjoyed around the world, including in India, according to Meherwan Irani, founder of Spicewalla, a brand of spices, herbs, and seasoning blends. But the default “cayenne pepper” in American spice canisters is a uniformly textured, dry powder.

“People call for cayenne all the time—there are a million varieties of cayenne, but depending on where it’s grown, how it’s grown, how it’s processed, with seeds or no seeds, the grind texture, when the peppers were picked, you could be talking about a very wide range of flavors and heat levels,” says Ethan Frisch, founder of Burlap & Barrel, an online spice retailer.

It’s a great time to be cooking with chile: from e-retailers and specialty stores, you can find an expansive selection of flakes and powders, from moist granules of urfa biber to crispy bits of Aleppo pepper to soft flakes of Espelette pepper enjoyed in Basque cuisine, often with transparent sourcing and rich descriptions about their origins and culinary traditions. And ironically, getting to know some of the nuances of each chile can actually help you appreciate their flexibility.

“It’s great in pasta because it makes this beautiful color. I think a lot of our customers just use it as a go-to chile for cooking.”

“I put it in Italian food all the time,” says Taylor Holliday, founder of The Mala Market, on the Sichuan xiang la la jiao mian, or fragrant-hot chile flakes, she sells online. “It’s great in pasta because it makes this beautiful color. I think a lot of our customers just use it as a go-to chile for cooking.”

These peppers, she says, are purchased from farmers in China’s Guizhou province by her supplier in Sichuan, who blends them, toasts them, and then crushes them into this versatile coarse grind with seeds. In markets in Sichuan province, Taylor has seen street spice vendors following a similar process, crushing the peppers fresh for customers with a giant mortar and pestle—somewhat like a coffee grinding station at a supermarket. From there, customers can further process the peppers in their home kitchens by frying them to make chile oil, for instance. The Mala Market also sells four of the most commonly used Sichuan varieties of dried peppers whole, including the J-shaped er jing tiao chile. But the crushed flakes are a shortcut if you’re just looking to add a touch of heat—a convenience product that spares you from crushing it yourself, says Holliday.

Frisch has observed the chile-crushing business in Turkey, where he sources Burlap & Barrel’s Silk Chili Flakes and Black Urfa Chili. In both varieties, seeds are removed when the peppers are fresh, then the peppers are spread out to dry in the sun. But with urfa biber, they are covered with a tarp so they steam and oxidize, turning darker in color and deeper in umami flavor. Then they’re crushed in big, stone grinders before they’re cured in salt and oil. There’s somebody supervising this process, making decisions about when and how long to grind a certain batch of peppers—that’s the ustad, the master of the chile flake making, an expertise separate from the farmer’s.

These relatively small-scale processes are artisanal compared to the enormous operations that bring you many of the chile flakes and powders commercially available in the United States—sold under brands like McCormick and Spice Classics. Levon Minassian has been growing and drying chile peppers for the last five years at Fire Tongue Farms in Santa Cruz, California, which he cofounded with Ryan Silsbee. They lease a dehydrating facility, which is shared with other clients including an apricot farmer, but it’s been difficult to make a dried product with just one acre of peppers that are ripe. The food processing facilities in California are built for enormous scale, he says. But with their seven-acre operation, they’re hoping to give customers a taste of the freshness, local terroir, and single-varietal characteristics of dried chiles that’s hard to get elsewhere.

“If you’re getting chile flakes from McCormick or you’re in a pizza restaurant, then it could be anything—it’s a blend of multiple kinds of chiles. So part of what we like to do is highlight the varietal and tell the story behind that,” says Minassian.

“If you’re getting chile flakes from McCormick or you’re in a pizza restaurant, then it could be anything—it’s a blend of multiple kinds of chiles.”

For McCormick’s part, it appears that consistency in heat, color, and flavor is essential. A representative for the 130-year-old dried spice brand writes that their crushed red pepper flakes are made with “red chili peppers” and lend a “consistency spicy heat.” And for their ground red cayenne pepper, “We start with whole pods of red peppers that are expertly selected for color and heat, then carefully grind them to preserve quality and pure flavor,” wrote the executive chef for McCormick, Kevan Vetter.

Michael Krondl, author of Taste of Conquest, believes that the name “cayenne pepper” on a canister of ground chiles from a large company such as McCormick is less of an indicator of a chile varietal and more of a heat rating. “Cayenne pepper is kind of meaningless,” he says. That is, it can provide the expectation of a heat level strong enough to tickle your nose but not burn your tongue, but it doesn’t tell you much else about where, when, or what the peppers were.

Perhaps that’s what most American consumers are looking for. Compared to other parts of the world, which adopted chile peppers into their cuisines hundreds of years ago and created traditions behind growing, processing, and using them—and, of course, Central America, where the fruits are native and have been eaten since pre-agricultural times—North America is just kind of behind on spicy food appreciation, says Krondl.

The typical, dark raisin–colored “chili powder” as sold by McCormick and many other spice brands is a blend of dried and powdered peppers often found in Mexican and Tex-Mex cuisine, like anchos, as well as other spices like cumin, as a shortcut to making chili, the Tex-Mex stew and Wendy’s menu staple, and they were probably grown in New Mexico, along with the almighty cayenne peppers (New Mexico is the “mecca of chile growing in the States,” according to Minassian). Yet the adapted Mexican traditions behind most American chile powders are not really clear on labels, and it can be confusing at a time when you can get “chili powder” from all over Asia, Europe, and Africa.

Lisa Carson, who cofounded the online spice destination Occo along with Connie Wang in 2018, says that her experience with chiles growing up in Nashville and later living in Wyoming was very limited. She describes her culinary background before launching Occo as “thoroughly Middle American.”

“There was always confusion in my head when something called for ‘chili powder’ or paprika or cayenne. I was like, What does it mean? There’s really not consolidated knowledge out there,” says Carson.

Wang, her business partner, has a different background. Growing up with Taiwanese immigrant parents, there were always chile peppers in the home kitchen—one big bag of crushed chile pepper, and another of dried whole chiles.

Occo sells chile flakes and powders in ten different varieties in small, sample-size pods—or as a library in a box set. It’s a solution for those looking to explore beyond the one-spice-fits-all approach, and who don’t want their collection to become stale.

“There’s shifting tastes and growing awareness,” says Wang, of consumers today. “When we were looking into what kinds of spices we wanted to sell, we were trying to pick things we wanted to cook with.”

Today’s very online chile pepper selection is an expression of a certain subset of American culture. Thanks to brands like Occo, Spicewalla, Burlap & Barrel, the Mala Market, and others, finding the perfect piri piri to spice up your dinner routine is as easy as finding the right sunglasses to spice up your wardrobe. Tapping into a well of indigenous and immigrant chile traditions while sitting in front of the computer can promise revolutionary results in your kitchen as well the pride of supporting responsible trade practices, in many cases. But for some experienced chile eaters, the “big bag” theory of Wang’s parents just may be enough for most, if not all, of their chile needs.

Today, Geetika Khanna tells me she still proudly uses cayenne pepper in all her cooking, Indian and otherwise, although she sometimes gets flak from friends about it. (She felt vindicated on a recent trip to India when cayenne pepper was used in Ayurvedic treatments at a spa.)

“There are very few things you should never do in the kitchen,” she said at her cooking class. “This is a free country.”