Get a free recipe
Subscribe
Hot Sauce in My Veins
By: Therese Nelson Illustrations: Lydia Ortiz 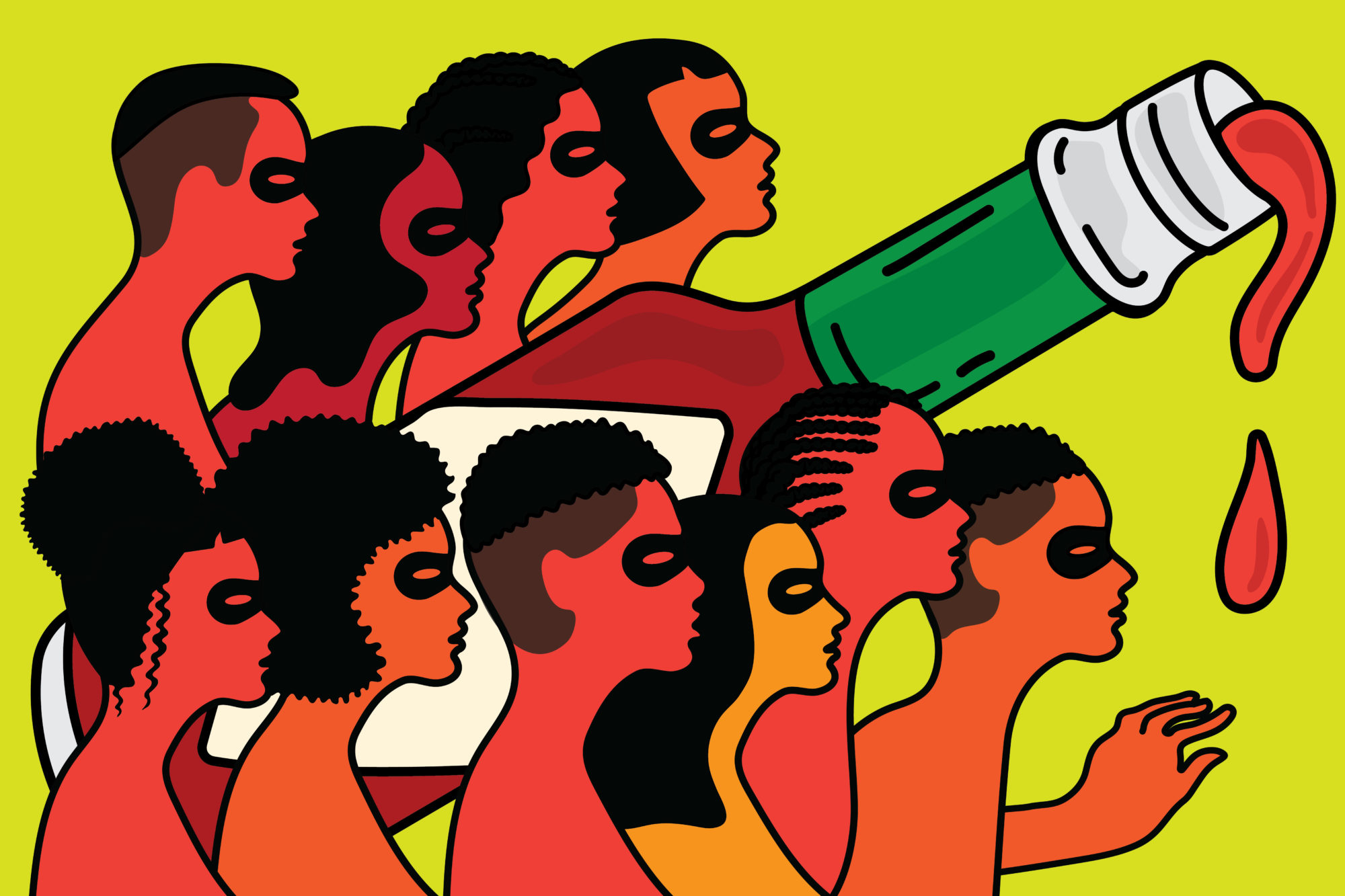 A few years ago, Beyoncé made an offhand comment in a lyric extolling the virtues of readily available hot sauce. It was a subtle wink and nod to black folks affirming a very real part of our foodways. This idea of hot sauce as an essential part of the black table is complicated, delicious, and very much key to understanding what makes our unique culinary tradition culturally important.

Black foodways, like black music and black literature, are very much a product of how people of African descent engage with the world. The black experience around the globe is similar in that it involves a search for personal identity and autonomy in a world that historically marginalizes you.

When I started to really think critically about black foodways in my own work as a chef ten years ago, I realized I could start in my own home with the culinary lessons I absorbed growing up, thanks to relatives from the American South. I had never really considered hot sauce a particularly miraculous concoction, but through the filter of my grandfather, the microcosmic nature of a simple sauce gave me a critical key to better understanding myself and my food.

My granddaddy was an interesting guy. He was born in 1938, only two generations removed from slavery, in a tiny town about 10 miles south of the North and South Carolina border and about 60 miles inland. He was part 1950s postwar dreamer and part Southern farmer with very little formal education. He was the youngest of 15 kids, so in many ways he lived a charmed and pampered life. But he was also a black man in the Jim Crow South, so he eventually heeded the call to migration north, like so many others in his generation. This migration is what gives us soul food as we know it today. These country farm kids who went north and west in search of dignity in a kind of cultural manifest destiny were craving home once they settled in New York and Detroit and Los Angeles. The result was diffusive, an immigrant cuisine of sorts that blended nostalgia with the ingredients and culture found wherever they settled.

My grandfather was a horrible cook. He went from spoiled youngest male in a household of women to meeting and marrying my grandmother very shortly after he arrived in New Jersey, so he never really had to cook. But I remember his sisters sending the peppers, tomatoes, and squash they grew in their victory gardens north each summer. Returning south was a luxury for those who participated in the Great Migration. Life outside the South was dirtier, faster, more consuming than they had imagined. And the trip back south was so dangerous and complex as to be hardly worth the trip, so the care packages of produce and canned, jarred, and preserved goods was a direct and powerful taste of home.

I can remember him telling stories about how everyone picked during the harvest season and that if you were especially poor you missed the first few months of school because you had to be in the fields with your family working. This to me speaks to the vital nature of food as an equalizer and how generations of displaced Africans seemed to carry the land with them no matter where they went. Scholarship and specifically cookbooks become critical to further understanding this story. A little over 23 years ago scholar and James Beard Award–winning author Dr. Jessica B. Harris wrote and published her first cookbook, Hot Stuff: A Cookbook in Praise of the Piquant. In it she uses her life of travel, and her innate taste, to take readers on a global journey to explore how different cultures engage and show reverence to the chile pepper and all its permutations. But for me the most fascinating parts are those in which she focuses on the African diaspora.

Dr. Harris examines the shifting food landscape of mid-1980s American dining culture and suggests that a look at the African diaspora would give hints as to how Americans would broaden their palates. She talks extensively and gives many recipes for dishes—including chicken yassa from Senegal, piri piri from Mozambique, and pepper wine from Barbados—that incorporate and rely on the chile, but the ones I’m most struck by are the hot sauces, given how ubiquitous hot sauce culture is right now.

Dr. Harris’s writing over two decades ago has come to life as whole industries, festivals, and media spaces have embraced the chile. Media juggernauts like First We Feast’s show “Hot Ones” brings the universal appeal of spiciness to the Internet. Diffusion is happening on the restaurant scene, with Tennessee hot chicken and mega hot chiles like ghost peppers appearing on fast-food menus as everyday flavors. There are festivals all around the globe devoted to this spicy condiment, like NYC Hot Sauce Expo in Brooklyn and the Festival of Heat in London. It’s oddly fascinating because in black culture, hot sauces have been a table staple for generations, but it’s interesting to see the rest of the world discovering these flavors. Hot sauces can serve as the foundation of a dish or a distinctive accent on an otherwise neutral one, with aromas as much a part of the experience as the heat level, whether it’s dried chiles ground whole and bloomed in oil or fishy fermented chile pastes.

Hot sauce is a miraculous thing. Think about it from a purely chemical perspective. At its most basic you’re talking about vinegar, or some other form of acidity, and a chili featuring capsaicin. There are certainly rounding flavors present, like garlic or spices, but at its core, a hot sauce is vinegar and chile working in tandem to enhance food and liven up your palate. Hot sauce is a panacea for blandness in a fundamental way. No matter your heat tolerance, chiles and acid in concert are a wondrous thing because they supercharge your taste buds and make any food brighter, fresher, and more flavorful. A brilliant political commentator and writer, Marc Lamont Hill, once said in passing that he always carried hot sauce in case some fried chicken popped off. It’s hilarious to think of this very educated and cultured man out amongst the people with hot sauce on his person, but I assure you he was very serious, and quite honestly it’s the case for many black people. When Beyoncé declares, “I got hot sauce in my bag, swag!” after the dozens of other ways she describes her blackness, the lyric makes clear how critical black food culture is a complex minefield of identity, celebration, and humanity. So much of our food story is tied up in how we engage the world and how the world engages with us. So much of our cooking is about leading to the act of eating, one of the few autonomous spaces we have, a cultural respite from the rest of the world. This idea is especially true in American culture, where our identity is coopted while simultaneously being misunderstood all while our very lives are in flux. Our food becomes one of the few spaces for joy and expression. Hill’s comment about hot sauce on his person, while hilarious and almost ridiculous, is also very much a statement about the constant search for deliciousness and heightened flavor that our culinary culture is predicated on.

On the black table, the pursuit of flavor is like a religion. From the days of slavery, when we made magic out of nothing, to the Jim Crow era, when food became a statement of dignity and self, to today, when food speaks to one’s place in the world, tastiness has always been the number one goal. I don’t think I can stress this point enough, because to examine black foodways is to understand that food is not merely nourishment but a caloric statement of joyfulness. There is a reason our drinks are so sweet, our greens have smoked ham, and hot sauce is a table staple. Hot sauce is our soy sauce; it’s our fish sauce; it’s a way to incorporate umami into simple dishes to make them sing. Ladies have been known to carry hot sauce in their bags as an emergency rescue elixir for blandness that might assault them out in the world.

For me, hot sauce has always been a table sauce. In most black households it’s a relatively mild mix of vinegar or some acid to brighten your palate, garlic for savoriness, and peppers for earthiness, heat, and composition. Sweetness can play a supporting role depending on the heat level of the chiles and how deep into the African diaspora your family moved: Caribbean sauces have a sweet element, usually from some fruit, and African sauces are typically heat forward and earthy from vegetables. There are recognizable store brands, but the magical combination of acid, savoriness, and heat creates a universally tasty concoction that anyone can easily make at home.

Food is the surest and most delicious way to examine culture. This examination isn’t always the focus of culinary work, but I think it should be, because that context instantly makes the food better. From soul food to home cooking and everything in between, hot sauce is a cultural mainstay, so the next time you pick up a bottle of Frank’s RedHot or Texas Pete, know that they have a magical power, and use it judiciously!

My granddad was a famously wacky cook, but he would make his secret and not-so-secret delicious hot sauces seasonally, when his sisters would send him cayenne peppers and bird chiles from their gardens in South Carolina.