Get a free recipe
Subscribe
The Horror Show Sealed in a Bulging Can
By: Rebecca Flint Marx Illustrations: Paige Vickers 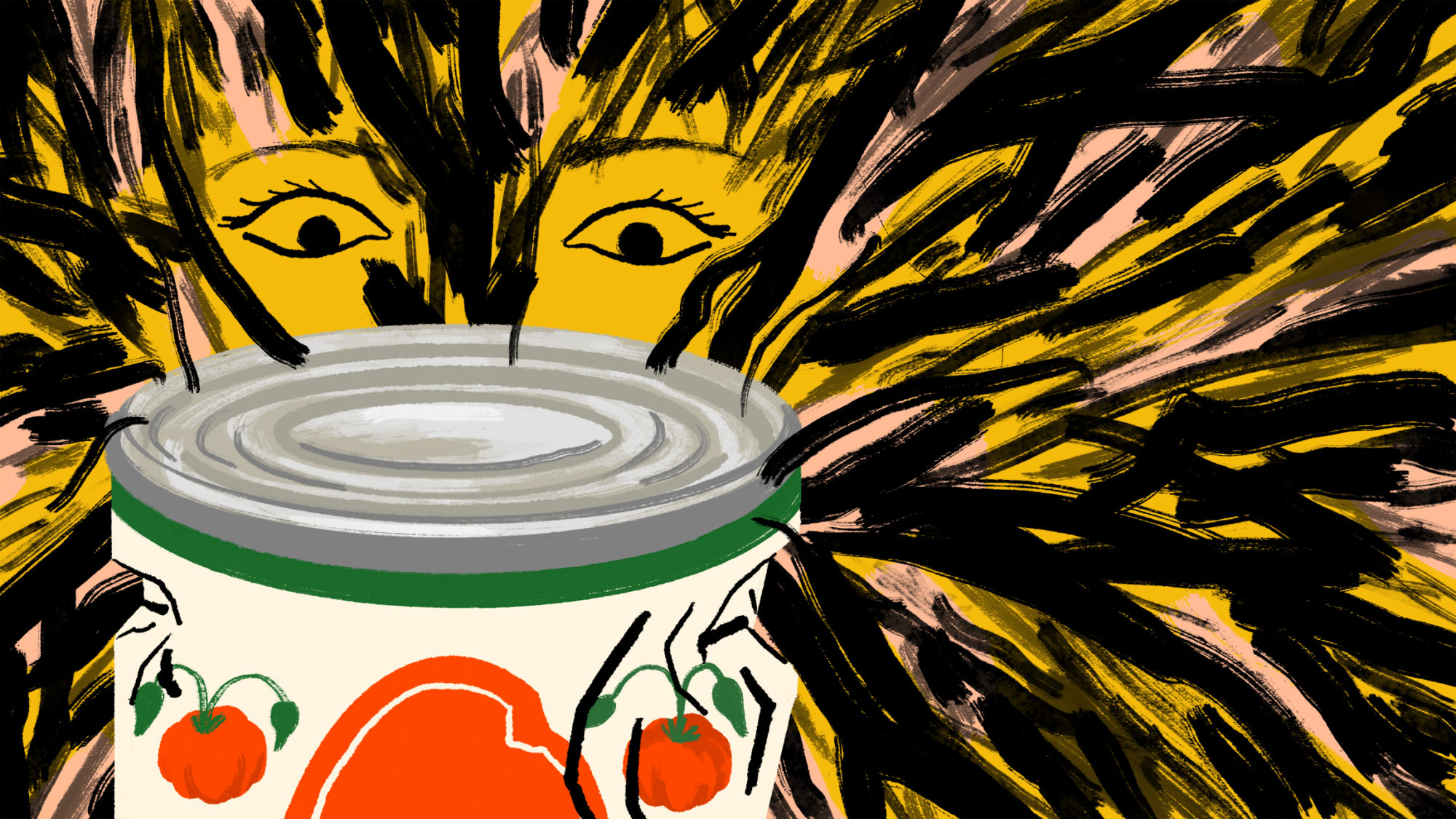 I grew up with both a love of canned foods and a free-floating anxiety about medical calamities. The former was thanks largely to Spaghetti-O’s, while the latter was the work of my father, a pathologist who delighted in relaying tales of worst-case scenarios made manifest. One day, adoration and anxiety found each other in the kitchen pantry—or more precisely in a bulging can of tomato sauce discovered lurking in its depths.

“See that bulge?” my dad asked. “Botulism. Do you know what that is?” I shook my head. “It’s a kind of food poisoning,” he said. “You can’t see it, smell it, or taste it, and a minuscule amount of it could kill you.” It wasn’t enough to put me off my Spaghetti-O’s, but it did complicate my relationship with food found in cans. I took to closely inspecting any canned food that came into the house, squinting my eyes to detect unseen bulges and dents—at least until my dad told me about a harmless-seeming heel blister that, during a game of tennis, had popped, become grievously infected, and killed someone, giving me something else to worry about.

If you aren’t familiar with the botulinum toxin, here’s a good place to start: “It’s the most potent neurotoxin that’s currently recognized,” says Elliot Ryser, a professor of food science at Michigan State University. “It’s 100 times stronger than rattlesnake venom.” To put a finer point on it: Scientists have estimated that 1 gram of the toxin could potentially kill 1 million people, while one pint could kill everyone on earth. This is a toxin that doesn’t bother to knock first.

Scientists have estimated that 1 gram of the toxin could potentially kill 1 million people, while one pint could kill everyone on earth.

(Also, yes, this is the same botulinum toxin that is used in Botox; for all of its apocalyptic potential, it is generally considered safe when used in a highly controlled clinical setting, and it has numerous therapeutic uses.)

Symptoms of botulism generally take at least several hours to appear and include difficulty swallowing and breathing, facial weakness, blurred or double vision, nausea, and paralysis. If it’s caught in time, patients are injected with an antitoxin and, in severe cases, put on a ventilator (because botulism can cause paralysis of the muscles used for breathing) for up to several weeks. Some people fully recover, but many suffer long-lasting—if not permanent—complications.

There are different kinds of botulism, but the foodborne variety is typically associated with canned goods thanks to the conditions that are most ideal for growing clostridium botulinum, the bacterium that produces the botulinum toxin: moisture, a lack of oxygen, and low acidity (meaning a pH level more than 4.6 pH). That said, improperly handled aluminum-wrapped baked potatoes and fermented fish are also known culprits, and the bacteria have been found in everything from improperly canned asparagus, beets, and broccoli to carrot juice and gas-station nacho cheese sauce.

And while dented or bulging cans are often thought to be signifiers of C. botulinum lurking within (hi, Dad!), that’s a false assumption, says Elizabeth L. Andress, a professor of foods and nutrition and extension food safety specialist at the University of Georgia. “Botulism doesn’t produce bulging cans,” she explains, but adds that a bulge or a dent “tells you the [canning] process was inadequate—it’s an indicator but not a sign of botulinum growth.” Foodborne botulism has a long, miserable history. The earliest research on the toxin was spurred by late-18th-century outbreaks of “sausage poisoning” in southern Germany; botulism actually takes its name from botulus, the Latin word for sausage. Coincidentally, the history of the canning process dates to the same era: In 1800, Napoleon Bonaparte offered a cash prize of 12,000 francs to anyone who could come up with a reliable method of food preservation to feed his army. A few years later, Nicolas Appert, a Parisian chef and confectioner, invented airtight food preservation (and was eventually paid his 12,000 francs by the Ministry of the Interior).

In the early part of the 20th century, as the food-canning industry grew in this country, so did incidents of botulism—researchers at the time found C. botulinum spores just about anywhere and everywhere, from soil and lakes to vegetable surfaces and fish and animal intestines. At the time the mortality rate was between 60 and 70 percent, even with the antitoxin. Fortunately, by the 1920s, advances in microbiology and in canning practices came together to paint a clearer picture of how botulism poisoning occurs, and the number of outbreaks from commercially canned foods decreased.

The 1970s, however, were something of a heyday for foodborne botulism. In July 1971, the FDA issued a public health warning after a Westchester County, New York, man died and his wife became seriously ill from botulism after consuming a tainted can of Bon Vivant vichyssoise (as if canned vichyssoise alone weren’t enough of a punishment). The incident led to a recall of 6,444 cans of vichyssoise and the FDA-ordered shutdown of Bon Vivant’s Newark, New Jersey, plant; the company went bankrupt within a month of the recall, and the federal government eventually seized and incinerated 1 million cans of Bon Vivant soup. Another, perhaps more intangible effect of the recall was a lingering public wariness of canned soup.

In addition to Bon Vivant, shoddy home-canning practices led to numerous botulism cases during the ’70s; a number of them were due to people “making things up [because canning guidelines] weren’t available at the time,” says Andress. “For example, they started experimenting with mixes of tomatoes and peppers like in Mexican salsa.” Peppers were actually implicated in one of the worst botulism outbreaks in the ’70s, when 59 diners at a Mexican restaurant in Pontiac, Michigan, were sickened by hot sauce made with improperly home-canned jalapeños.

A home-canning project gone bad was responsible for one of the country’s most recent botulism outbreaks: in April 2015, a 54-year-old woman died and 23 people were hospitalized after consuming homemade potato salad at a church potluck in Lancaster, Ohio. The salad had been made with potatoes that were canned using a boiling-water canner instead of a pressure canner, which kills C. botulinum spores. The potatoes were also not heated after being removed from the can, a step that can kill the botulinum toxin. According to the Centers for Disease Control, the outbreak was the largest in the U.S. in 40 years.

The good news? Botulism outbreaks are rare: Per the CDC, there’s an average of 145 cases per year in the U.S., of which only 15 percent are foodborne. And it is really, really easy to avoid breeding C. botulinum spores in your home canning projects. Andress recommends following the USDA’s guide to home canning, which you can find on the National Center for Home Food Preservation website; it’s also available in print form. One important, all-encompassing, guideline is to use a pressure canner when canning meats and vegetables, and also to resist the temptation to wing it if you can’t find a particular fruit or vegetable listed in the USDA’s guide.

Andress also cautions that the heating process used to prevent the growth of C. botulinum doesn’t adhere to a one-size-fits-all model. “There are lots of things that influence whether the needed amount of heat will reach where the organisms might be in a jar or can of food,” she says. The kind of food, the size of the pieces, and the ratio of liquid to solids all factor into whether heat can get to the bacteria and kill it. So one more time: Don’t make things up as you go along. You may not find what you’re looking for in the USDA’s guide, but as Andress very reasonably says, “no homemade food to me is worth dying for.”