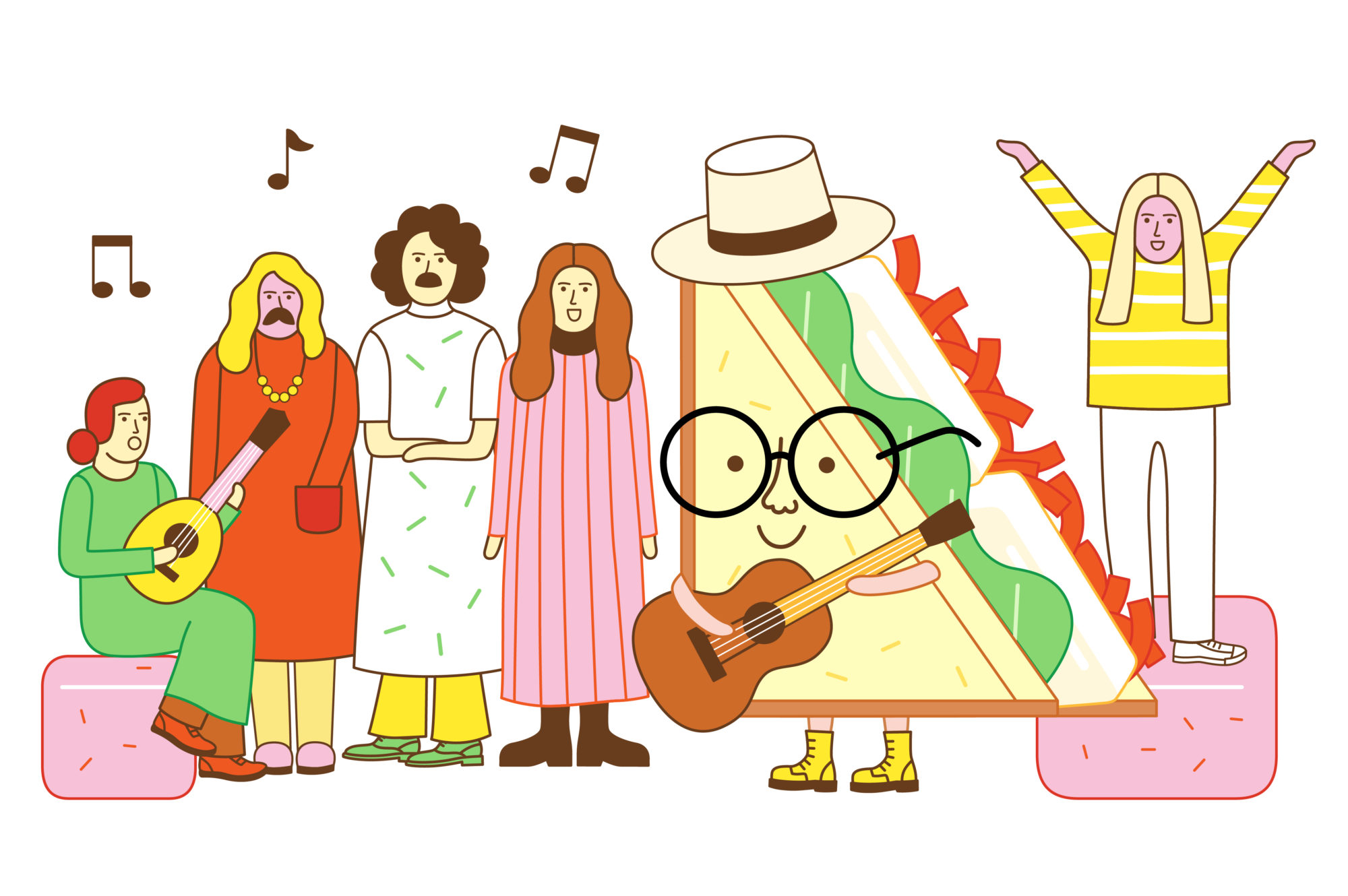 In a world of bare vegetables and boutique grains, the classic tofu sandwich transcends culinary fashion and evokes an earlier, crunchier time.

I ate my first hippie sandwich in 2001 at a place called Tiger Lily Café. It’s still there, in Port Jefferson, New York, not far from where you’d get on the ferry to Connecticut. The bright colors of the walls—swirls of lime green and orange paint—are still there, too, along with all the portraits of the restaurant’s patron saint, Ani DiFranco. The first time I went there, my cool friend Merette drove us in her Jetta even though she still only had her learner’s permit, which added to the illicit feel of ordering a meatless meal. I would go home and eat my mom’s medium-rare London broil, sure, but there at Tiger Lily I was alternative, joining the ranks of those before me who’d given up animal flesh for righteous anti-establishment reasons.

The tofu, tomatoes, lettuce, and sprouts soaked through just the right amount of the toasted whole-wheat bread on which they resided, creating a bright crunch that had the added bonus of being healthy and virtuous. That crunch stayed with me, and when I saw the same sandwich on the specials menu of my local Brooklyn bagel shop recently—after years of thinking I’d outgrown it—I couldn’t resist. And all the reasons for its appeal remained the same.

When I was growing up, the only tofu my family regularly came into contact with was what floated in the miso soup at our go-to sushi restaurant. We didn’t eat lentils, or brown rice, or sprouts (although we weren’t purely in the meat-and-potatoes camp, either); beans were reserved for serving with white rice alongside pork.

But for some in the U.S., this way of eating had been a way of life—though not a way lived by anyone I knew. So to get greater insight into the origins of the hippie sandwich, and the subculture that created it, I recently turned to writer Jonathan Kauffman’s forthcoming book Hippie Food: How Back-to-the-Landers, Longhairs, and Revolutionaries Changed the Way We Eat. Thanks to the 1971 publication of Frances Moore Lappé’s Diet for a Small Planet, Kauffman’s own childhood diet was rife with the stuff of natural grocery store bulk bins; his parents were inspired, as Lappé was, by the realization that the world’s human population could avoid hunger if it stopped feeding all its food to farmed animals.

“Lappé called animals ‘protein factories in reverse,’ and that idea really caught people’s imagination,” Kauffmann explained to me over the phone. “The counterculture was starting to think about food in political terms for the first time, and there was all this sort of general concern over how they should be eating, but also how they should be eating in a way that was more connected to the environment and the political situation of workers and the health of the soil, and that shift really just galvanized a lot of people.”

Soybeans could be a key protein source, Lappé wrote, and that inspired the Buddhist monk William Shurtleff and his partner Akiko Aoyagi to apprentice in Japan’s tofu shops in order to write their seminal text The Book of Tofu. In 1978, The New York Times described the book’s 1975 publication as one of the “events that awakened the West to the wonders of tofu” by explaining its history, how to make it, and why to eat it, and providing recipes that Aoyagi wrote while using The Joy of Cooking to figure out what would appeal to American palates. Tofu led to the protein’s proliferation among newly enlightened white Americans and to its ubiquity in vegetarian cafés.

While the book was tofu’s most accessible route to a very specific demographic in the middle of the country, it wasn’t its first introduction to the U.S. “White folks on the West Coast and a few on the East Coast definitely came into contact with tofu through Japanese and Chinese tofu-makers,” Kauffmann said, “so by the early 1970s, there were a few dozen of them scattered across the United States—some for as long as a hundred years.” (The New York City company Tanaka & Company, mentioned by the Times story, was founded in 1904, according to a 1984 issue of Soyfoods magazine.)

And that, indirectly, is how we got the hippie sandwich, a very specific name for an item that nonetheless translates broadly: It’ll have tofu, sprouts, veggies, maybe a lick of hummus, and you’ll feel good about eating it. That it’s survived the often fickle counter-cultural allegiances of those who pass through a vegetarian or vegan lifestyle also testifies to its enduring appeal; relatively few people may know about the Hippycore Krew, a group of punk anarchists whose 1980 vegan recipe pamphlet, Soy, Not “Oi”!, prominently featured a recipe for homemade tofu, but you’re still able to find a vegan or vegetarian café’s serving some variation of tofu sandwich: Consider Superiority Burger’s Superiority Wrap, a.k.a. the “hippy wrap,” which brings tofu, brown rice, and vegetables together in burrito form, or the “Buddha’s Karma Burger” at Chicago Diner, with a curried sweet-potato-and-tofu patty. In the hippie haven of New Paltz, New York, Karma Road serves its baked tofu sandwich with walnut pesto. Seitan, avocado, and jackfruit may reign on menus now, but tofu maintains its nostalgic appeal.

As Kauffman’s book points out, hippie foods gradually became mainstream. When you go to Whole Foods for all the ingredients for one of these sandwiches, you might hope your choices will have a positive environmental impact, but you’re not escaping how the hippies’ (and Hippycore Krew’s) more radical intentions have been swallowed by corporate interests. While it was once a mark of anti-capitalist rage, now making tofu by hand is just a sign that you have the time and ambition for a DIY project.

The hippie sandwich perseveres as a signifier, though, because it transcends culinary fashion. Grain bowls, green juice, and other animal-free foods are now all but ubiquitous (at least in urban areas), emblematic of a new, more widely palatable (and Instagrammable) style of veganism. That’s been a win of sorts for the kind of hippies Kauffman writes about, but these foods are divorced from their political roots when they’re artfully arranged on Instagram.

The hippie sandwich, on the other hand, is the rare vegan food that manages to endure even in spite of its unfashionable origins; it’s a little like the Birkenstock of the meatless universe. Whether you’re a health-conscious “plant-based” eater or a mock-meat obsessive, the tofu-sprout-veggie trinity feels virtuous and connects you to a time when people thought they could change the world with soybeans. We might know better now, but, just as I did as a wannabe alt-teenager, it’s nice to pretend.