Get a free recipe
Subscribe
The High Priest of American Ice Cream
By: Max Falkowitz 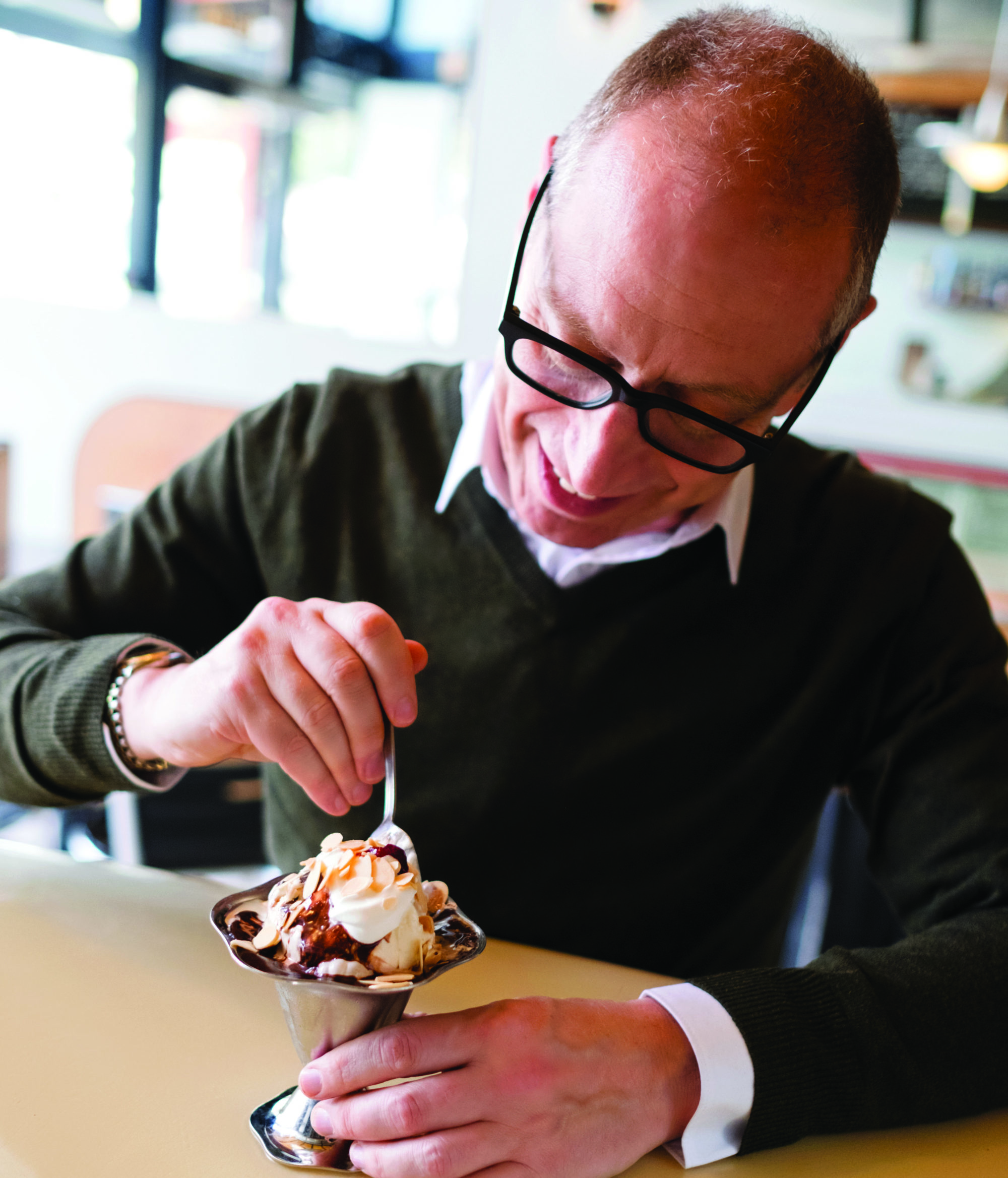 David Lebovitz is coming over for ice cream, and I’m mortified.

The black sesame and orange scoop I’ve made a dozen times before doesn’t taste right—the orange zest is weak, and I undersalted the base. I wouldn’t serve it to my friends, let alone America’s most influential ice cream maker.

The doorbell rings. It’s too late. Time for me and my subpar flavor to face the music.

Of course, if you know David Lebovitz at all, from his many cookbooks or phenomenally popular blog, you know he’s unfailingly warm and encouraging. “Parisians make an art of deliberately not understanding you,” my Swiss uncle likes to say, but Lebovitz’s 14 years living in Paris haven’t diminished his sunny California demeanor. As we lean over the kitchen counter and talk shop and dip spoons into the ice cream, he somehow makes me feel more at home in my own home.

Lebovitz is in town to promote the updated edition of his seminal 2007 cookbook, The Perfect Scoop, which comes out later this month. Odd timing for an ice cream book, maybe, but true fanatics know that ice cream is a dessert for all seasons. And Lebovitz’s favorite flavors veer toward decidedly cold-weather cooking: vanilla, chocolate, coffee, and caramel. “I don’t love fruit ice cream,” he confesses. “I’d rather make sorbet in the summer to capture the taste of the fruit.”

I’ve invited Lebovitz over to my Jackson Heights, Queens, apartment and presented him with a Chopped-like challenge: throw my pantry cabinets open, dig through unlabeled jars of raw honey and whole spices, and whip up an ice cream on the spot. He settles on a brick of smoky raw cane sugar from Guatemala. “This kind of bittersweet is exactly what I like,” he says after sampling the goods. He chops it fine and scoops about half a cup into a saucepan on low heat. “I wonder if we’ll be able to melt it like this without burning it. Then maybe we can use it as a swirl.” The sugar, dark as molten chocolate, starts to bubble. The ice cream world has a constellation of stars: Jeni Britton Bauer of the iconic Jeni’s Ice Cream; Meredith Kurtzman, the empress of American gelato; Dana Cree and Stella Parks, nerdy whiz kids who employ good chemistry as much as good vanilla; and Michael Laiskonis, whose in-depth writing on the subject verges on the philosophical. But no one’s inspired more home cooks to pick up a scoop and get churning than Lebovitz.

“I’m not taking responsibility for…the increase in sales of ice cream machines,” he writes in the new introduction, “but I was happy to be part of the burgeoning interest in artisan ice cream shops.” That includes places that cite his book as the ice cream bible, such as Ice & Vice in New York and Glaces Glazed in Paris. “When I’ve gone into some of them,” Lebovitz recalls, “the owners say, ‘I stole all your recipes,’ and I tell them that’s great. The ice cream community is incredibly supportive.”

We test how the molten sugar reacts to a scoop of black sesame ice cream; it seizes instantly and sloughs right off, not what you want from a supple swirl. “Okay then, how about we use this to flavor the base instead.” We cool the sugar down with some cream, then guess-pour a couple cups of plain custard base. Like all desserts, ice cream is finicky when it comes to ratios and technique. But once you understand those basics, you can turn pretty much anything you want into something scoopable and delicious.

Since The Perfect Scoop was published, writers and home cooks inspired by Lebovitz’s straightforward introduction to the form have taken increasingly technical approaches to churning a better, creamier batch. Now you can read lengthy blog posts on how aging your base overnight improves air-bubble stability by allowing fat crystals and globules to partially coalesce; you can even plug your ingredients into a butterfat calculator to determine the exact fat percentage of a new recipe. Scoop shops have made big business out of liquid nitrogen ice cream, promising smaller ice crystals than you could ever achieve with a conventional machine. Lebovitz is in awe of all this progress and contributes his own findings online whenever he can—along with tales of enviable countryside meals and deep dives into French desserts and bread baking. But he’s a little bemused by some cooks’ drive to not just understand ice cream but “optimize” it on the road to perfection. “Readers want to know everything now,” Lebovitz notes with a touch of weariness. “Can I freeze this? How long will it last? What happens if my caramel gets lumps? It’s made writing more vanilla—you spend your whole time anticipating questions rather than actually writing. And to be honest, I love little lumps of caramel in my ice cream. I like little ice crystals, too, that taste of cold.” Lebovitz may be the Internet’s on-call ice cream perfectionist, but his favorite desserts are rarely “perfect.”

Our base is coming along, but it still needs something. Not vanilla, we agree when adding a drop to a test spoon, but a shot of Japanese whisky turns out to be just the thing to brighten the smoldering taste of the sugar. We chill the base down and set it to churn in my Breville countertop machine.

These days, getting to cook purely on instinct is a rare treat for Lebovitz. When he’s not traveling or writing, he’s answering reader questions on his blog or on Instagram. He still enjoys it, but he can’t help reminiscing about the days when food writers like Madeleine Kamman could focus on telling stories rather than solving problems. “Blogging used to be so much of the moment, but now even if I post a dish from a street cart on Instagram, people say, ‘Recipe, please!’”

Which is one of the reasons he still enjoys making ice cream. “It’s a mechanical process. You get your setup and follow the same steps and just work. People start to overanalyze it, but if you respect the process, you’ll get something good.”

The ice cream’s a little soft because of the whisky, but we can still paddle stretchy bits of it into a bowl. As any experienced maker can tell you, ice cream never tastes better than it does in the first few minutes after you pull it from the churn, which is how Lebovitz and the pastry team at Chez Panisse—where he cooked on and off for 15 years starting in 1983—served it to customers back in the day.

We splash a little more whisky on top. “I love that taste of raw alcohol on top of fresh ice cream.” The spoonful dissolves into tropical caramel, leaving behind tiny pebbles of sugar that I chew with my teeth. 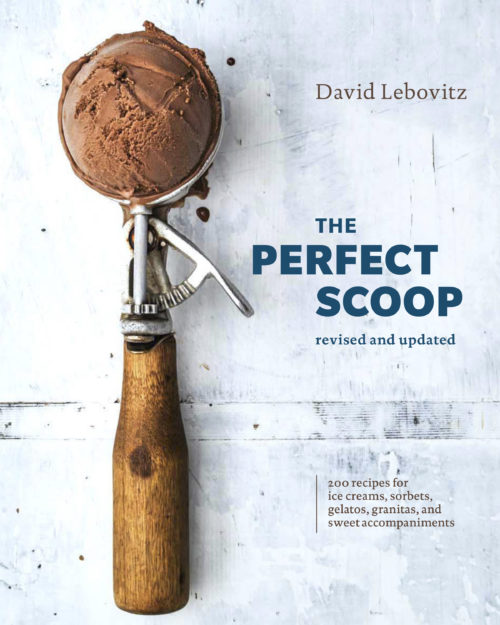