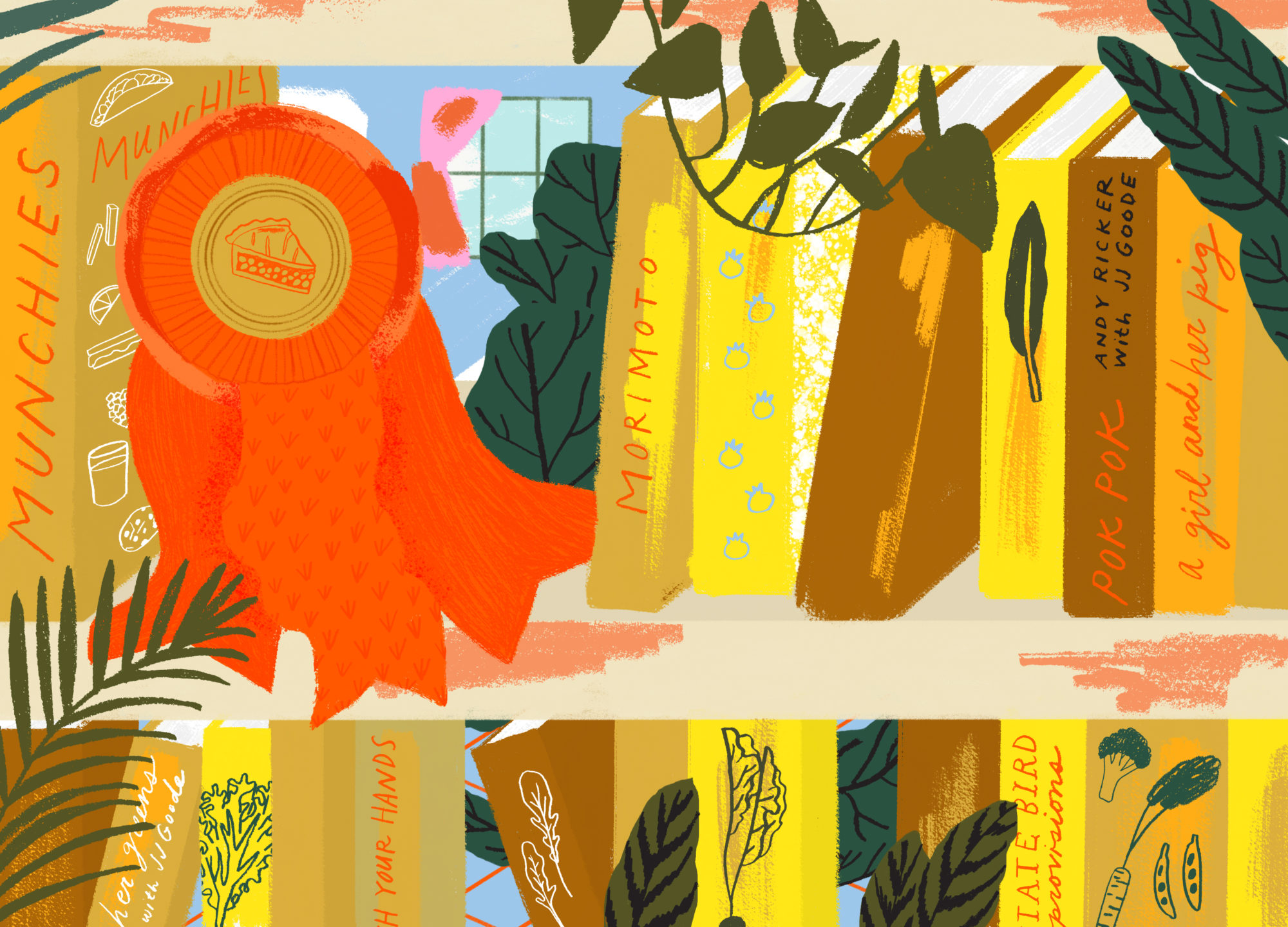 I write cookbooks for a living, but I’ve never even made piecrust.

Pop, pop, pop! More explosions. I cover my head and race toward safety, ducking behind my open fridge door to block shrapnel, then peering over to see if the worst is over. I grab a pot lid and hold it in front of me, a knight with a shield. I inch forward to survey the damage. It’s a grisly scene—oil splattered everywhere, a few limp shishito peppers in the pan gasping their last breaths, others scattered across the stovetop and floor in pieces. Alas, I’m used to this sort of tragedy. It’s just another day in the life of America’s best worst cook.

I should be a good cook—after all, I’ve had some of the best teachers in the business. As the coauthor of a dozen cookbooks, I’ve scribbled notes as April Bloomfield sautéed veal kidneys, looked on as Eric Ripert extracted sea urchin gonads and emulsified them with butter, and held my iPhone aloft to record Pok Pok’s Andy Ricker as he enclosed curry-paste-slathered fish in banana leaves, only to review the footage on loop for an hour as I struggled to adequately describe how to execute the persnickety wrapping.

Yet while I help chefs write meticulous instructions for their recipes, I rarely follow them myself. That’s a job for my small army of recipe testers, who shop, cook, and diagnose problems to ensure that the results match the high standards of the chefs in question. Meanwhile, I’m at home trying not to die in a hail of exploding peppers.

I know so much but have done so little, which makes me a peculiar kind of expert. When friends call to ask for advice on, say, making piecrust, I can school them on the virtues of lard over butter, butter over lard, and vegetable shortening over both. I share all the secrets—very cold butter, a little vodka, the goal of almond-sized clumps of fat—except one: I’ve never made piecrust myself. And I’m the king of the heap. No one else can boast my skyscraping ratio of ambitious cooking observed to ambitious cooking actually accomplished. What’s stopping me from doing? So many things! A toddler. The genuine fear of killing my friends and family with the one-two punch of undercooked poultry and uncontainable grease fires. An ardent affection for lying on the couch. On top of all that, I’m cursed with a peculiar asymmetry—instead of an onion-steadying, pot-grabbing, meatball-forming right arm, I was born with a short, goofy appendage, inexplicably bent into an L shape and graced by just three fingers, dangling from my right shoulder. It’s not that I can’t dice onions, lug pots, or roll meatballs—I can also tie my shoes and do push-ups!—it’s just that for me those tasks are significantly more annoying.

In many ways, my challenges add up to a professional advantage: The shoddier my culinary skills, the better an advocate I can be for a cookbook’s potential readers, who share at least some of my doltishness, when I ask chefs the questions that drive them crazy: Do you have to chop vegetables into microscopic cubes? Can you really add battered chicken to six inches of hot oil without donning a suit of armor first? How do you know when the noxious bacteria inside your fried chicken are adequately neutralized? Still, only some of the details I elicit end up in the recipes, since for some unknown reason publishers balk at the idea of discursive directions that are about three times as long as necessary.

Yet now, for this column, I’m sitting down to write recipes for cooks like me. They will be directions that encourage the fearful, reassure the paranoid, and most important, work even for those of us without the hard-won culinary instincts gleaned from decades at restaurant stoves or kitchen counters.

You’ll find no tautological instructions that tell you to cook chicken until it’s “cooked through” and mix ingredients for a dough until they “look like dough.” You won’t find much of the typical recipe shorthand—“cut in the butter,” “fold in the egg whites”—that member’s-only vernacular that only seasoned cooks understand. When a recipe tells me to “turn out” dough onto “a work surface,” the anxious me wonders whether I did the right thing in simply dumping the mixture onto my counter. Whenever one directs me to “beat until incorporated” I wonder if I’m meant to violently compel eggs and flour to form a company. So many common instructions leave so much unsaid. Mine will trade patrician pith for a Jewish grandmother’s restraint.

For this column, I’ll share recipes for difficult dishes that are actually easy (if you do them my way), easy recipes that are actually difficult (if you worry like I do), tasty treatments for a one-armed cook’s favorite vegetables (no chopping necessary), and many more. For my first recipe, I present to you instructions for making piecrust, which at long last I’ve made (and several times, at that). I will tell you what most cookbook authors do not—it isn’t easy. Not even close. But you can do it, and the flavor and flaky texture are worth the trouble.

I want to tell you that my few times making piecrust was easier than I thought it would be. But I can’t. At every step—whizzing the flour and butter in a food processor, adding the liquid, packing the mixture into a sorta ball—I expected the mixture to, you know, resemble piecrust. It doesn’t. And so at every step, I was sure I’d screwed up, despite first consulting dozens of how-to videos and step-by-steps, including Melissa Clark’s incredibly useful guide. Even she couldn’t envision a cook as dim and fearful as I am. (Don’t even get me started on the hell of rolling.) Yet courageous me, I persevered. The result is a damn-good crust that has been baked about halfway so it’s ready to fill and finish in the oven. To guide you the rest of the way, do what I would do: Google.

Make and Chill the Dough

Roll the Dough and Line the Pan