Get a free recipe
Subscribe
He Cooks, She Cooks. He Elevates, She Relates.
By: James Hansen 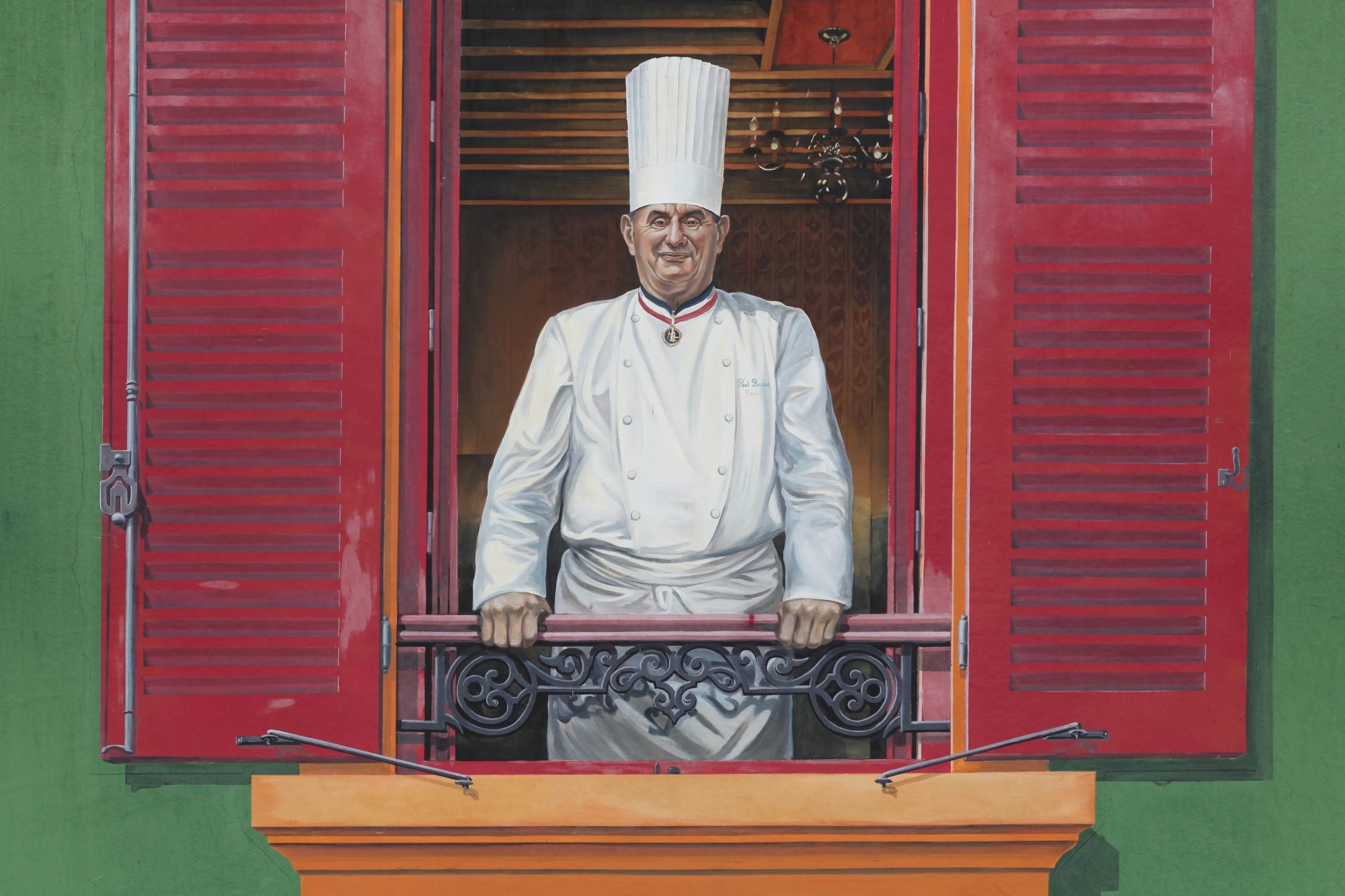 Are great chefs also great artists? They could be—if being “great” is taken as read. Food has appeared in art since time immemorial. In 1932, Filippo Tommaso Marinetti published The Futurist Cookbook, in which the processes of cooking and eating are connected to avant-garde performance. Judy Chicago’s 1974 installation The Dinner Party set an iconographic table for women’s growing ownership of self in culture. Bronx collective Ghetto Gastro highlights New York’s racial inequalities with dinner installations. Grant Achatz paints dessert on a tablecloth at Alinea. Food intersects with art. But what makes either “great”?

The “great” that Noah Charney describes in his recent TASTE article fits a set of parameters: traits and qualities that chefs and artists can fulfill. His reference points—Aristotle, Giorgio Vasari, Eric Ripert, Ferran Adrià, Thomas Keller, David Gelb—all believe that food can be produced and appraised as an aesthetic object. They are all white. They are all male. They are all part of a Eurocentric tradition. Of the three women quoted—also all white—two, editor Bettina Jacomini and chef Ana Roš, are of the same opinion. The third, chef-owner Cindy Pawlcyn, says, “Food is nourishment to me, not art.”

This distinction—the “to me” part—is crucial. However much its perception may be earned, greatness is bestowed, and with the growing virality of digital media, it is bestowed ever more quickly. Greatness in the food world is coded by language and optics as much as it is in the art world: “fine dining”; “gods of food”; the classical soundtrack, shallow depth of field, and hagiography of Chef’s Table. This greatness is bestowed by gatekeepers and consumers of that media: editors who commission profiles and readers who retweet them. Our ways of seeing fine dining replicate the ways of seeing that defined fine art from 1400 to 1900: aesthetic objects produced for a consumer and a gaze defined by the dominant social order.

As John Berger explains in the 1972 television series Ways of Seeing, while men are granted the freedom to regard things outside of their experience—art, food, culture—and judge them freely, women, LGBTQ, and people of color are expected to constantly envisage themselves as someone looked at, as an object, not a subject, analyzing and scrutinizing their own interiority over and above the unequal power structures of the world outside. When Jay Rayner says he has “not come across a chef whose cooking actually makes me dwell upon the meaning of who I am,” he speaks from this position of privilege.

Men are free to treat food as something to be gazed at and regarded—in the sense of both sight and regard, admiration, even lust—while women are encouraged to envisage food’s place in community, staying within the boundaries of their own identity. The trailblazing approach to food documentary as represented by Chef’s Table contrasts with humble, rooted, grounded cooking. The program defines the “great” chef on these terms, just as the canon of fine art defines the great artist. The apotheosis of food is something aesthetically challenging; the apotheosis of a chef is a man, a white man. To adapt Berger’s thoughts on animal portraiture: “Not food in its natural condition, but food whose pedigree is emphasized, and whose pedigree is proof of its value.”

It’s telling that white chefs will typically acknowledge a female influence—a mother, a grandmother—before moving past and elevating the food and community that inspired them, now citing a fellow great chef. David Chang’s dude-bro crew of experts on Ugly Delicious tells its own story: The experts are the people eating tacos in the car and flying around the world, experiencing and analyzing a culture not their own. Women and people of color are largely kept within their own neighborhood, or tied to a food seen as a conduit to identity politics: When Fuchsia Dunlop is the expert on Chinese textures, orientalist optics come to the surface.

Greatness even becomes pedigree; male chefs can even call their own work great while knocking women’s down. In 1975, Paul Bocuse led with the obtuse: “Women…lack the instincts for great cooking,” the chef told Craig Claiborne of The New York Times. “It follows in the same sense that there are so few great women architects and orchestra leaders. Women who become chefs are limited in their accomplishments. They have one or two dishes they accomplish very well, but they are not great innovators.” If women who become chefs are limited in their accomplishments, it is because the parameters that define accomplishment—and greatness—are stacked against them. Dr. Anna Sulan Masing explains that “men are allowed (and afforded) the ability to transcend the personal to create ‘great’ art. Women and art are relegated to the home, re-creating belonging—oral storytelling, home cooking.” Men are also granted the ability to both extricate themselves from their own culture and repackage its output as elevated: to travel away for inspiration before returning to elevate, improve, make honorable. Réne Redzepi reclaiming Nordic ingredients and identity is great; Alex Atala reclaiming Brazilian food as elevated is great; Christina Tosi reclaiming childhood nostalgia is relatable. Female creativity is seen as grounding and nourishing; male creativity as refining and elevating. When greatness and ascension are so inextricably tied together, it’s no wonder its definitions leave so many groups behind.

This is troubling, as writer Alicia Kennedy points out: “Who does fine dining serve? Unlike a work of art, a meal from Noma can’t be put on display in a museum for all to enjoy for the low cost of admission. TV shows like Chef’s Table, then, sort of bridge that gap, but again: You can’t taste it; you can’t be nourished by it. Food that doesn’t nourish is purposeless.” This democratization of public display is important: The display of “great” works subjects them to critique from critics outside of the dominant canon and encourages reappraisal; more diverse definitions of great, important art are encouraged. When this can’t happen, the structures of the canon reproduce themselves: Awards beget awards, PR begets PR, profiles and programs beget profiles and programs. The constant inequity of awards like World’s 50 Best and Michelin is one symptom of this; another, subtler, more insidious symptom is second-classery.

The James Beard Awards have America’s Classics; Michelin has the Bib Gourmand; World’s 50 Best has, unbelievably, World’s Best Female Chef. While the latter does good work in spotlighting a huge problem, it also reproduces inequality. The other awards, meanwhile, bestow “goodness” upon restaurants, chefs, and figures that each committee’s working definition for greatness cannot admit: While the Beards did better this year, with 11 out of 16 awards going to women, people of color, or both, the conclusion is no less troubling: Greatness is a closed, exclusive, white, and Eurocentric shop.

It also plays out in public. Greatness is a visible quality: We are taught and told that certain traits and certain people are great, and we are taught and told this in public spaces. Writer and restaurateur Jen Agg tells me how this is not always the case: “The culture as a whole primarily values the voices, praises the work and gives second (and third and fourth) chances to white men,” she says via email. “Men who lean liberal are aware of all this and don’t want to be outright hostile to women, so they do it in ways that are harder to call out, like by amplifying male voices and ideas and by back-channeling praise, which is basically useless. If you’re not willing to stand behind something as innocuous as a compliment, then don’t bother.”

The public nature of greatness complicates our relationship with those who fall from it. The #MeToo movement has directed public consciousness toward issues women and people of color have been shouting about—to deaf ears—for decades, and has accordingly led to all-too-premature questions of redemption. Whether a great male chef, a great male author, or a great male filmmaker, Kennedy is certain that greatness breeds premature forgiveness: “The idea of greatness, of course, is so deeply tied to white, patriarchal, capitalist notions of worth. I suspect that’s what makes it so difficult for us to let go of the heroes we’ve built up, such as Batali. If he was a great chef, someone who succeeded in all the ways we are taught are significant, then surely there must be some way to forgive him his trespasses?”

This is an important symptom of the cultural biases in play when it comes to “greats.” While those who are “great” can earn redemption—and even self-pardon—when forgiveness has not been sought, suffering and trauma are encoded as fast-tracks to coverage for women, people of color and LGBTQ+ members of the food world. For groups marginalized by greatness to enter such a limited pantheon, the road to that greatness must be paved with struggle: Their greatness and brilliance must stem from or occur in spite of trauma and struggle; expertise must be battled for and won, not earned or learnt.

So what might more progressive definitions of greatness look like? Soleil Ho recently visited the People’s Kitchen Collective in Oakland, a group that challenges assumptions around greatness to center the telling of cultural stories on the people of that culture’s terms. This seems like a good place to start. Cooking together is radical; eating together is revolutionary; the chefs and restaurateurs who support the communities around them are great; the people who ask if everyone is OK before service are great; white chefs can still be great. The canon of “great” can be dismantled; Chef’s Table’s frames can widen; guides and awards can become more representative.

In Manet’s 1863 painting Le Déjeuner sur l’Herbe (“luncheon on the grass”), two fully dressed men recline in a park. One naked woman sits alongside them; another bathes in the background. The women are naked, but not themselves: naked as object, as “a nude” for men to gaze upon. A basket of fruit and picnic food is tossed lazily to the side, a prop to the male gaze, a chance for communion denied.

This painting both conforms to the working canon of great art and challenges it: The first woman’s gaze engages with that of the spectator, as if asking whether she is to be judged, and how, and why. How is this great? What can be great about this? If we are to ask the same question of food, it leads to two conclusions. First, asking whether “great” chefs can be “great” artists perpetuates the public reproducibility of one kind of greatness. Second, anointing chefs, restaurateurs, and restaurants as “great” without critically engaging with the terms of greatness does exactly the same. Perhaps great chefs can be great artists, and perhaps food can be nourishment and art, without cleaving a distinction that alienates entire demographics and cultures. But isn’t the bigger thing instating bigger, better, more inclusive greats—a greatness that includes and invites instead of leaving so many out of frame?