Get a free recipe
Subscribe
The Deep Pleasure of a Steamed Hot Dog
By: Terrence Doyle Illustrations: Lauren Cierzan 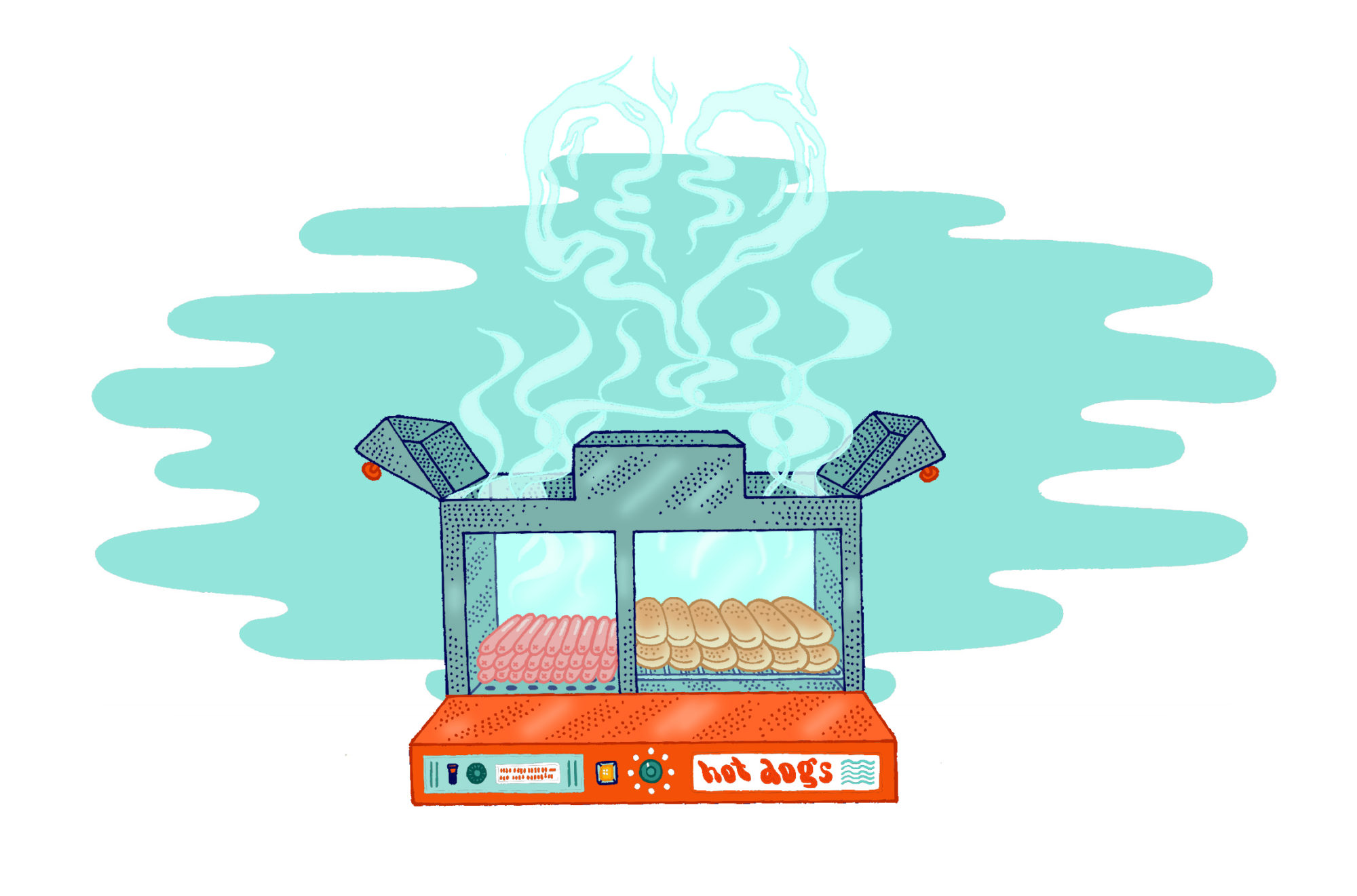 A step above an overly charred hot dog or a soggy boiled hot dog is the steamer—a classic of ballparks and dive bars alike.

I’ve never met a hot dog I didn’t like. Grilled, pan-fried, boiled in the dirty water of a New York City street cart, even microwaved: As long as those pink rods of questionable provenance are wrapped with one form of cheap white bread or another and drowning in a combination of spicy brown mustard and neon green relish, I’m eating. But not all hot dogs sate my craving for bad meat equally, and in fact only one kind ever leaves me truly satisfied: That would be the increasingly elusive steamed hot dog.

I cannot remember the first grilled or pan-fried or boiled or microwaved hot dog I ate, but I have vivid memories of my first steamed hot dog. I was five years old, and I had just finished my first skating lesson at Henry Graf Jr. Memorial Skating Rink in Newburyport, Massachusetts. The concessions stand—framed by, appropriately, mustard-yellow cinder blocks—was equipped with a stainless-steel-and-glass hot dog steamer, the front of which was emblazoned with cartoon hot dogs. My father ordered three—one for me, one for my brother, and one for himself—and dressed them all with mustard. I didn’t know then that putting ketchup on a hot dog was tantamount to treachery, and I don’t think I’d ever eaten a hot dog without it till that point. But the combination of steamed hot dog (and the steamed bun, which was warm and pillowy but not wet), snappy natural casing, and mustard was a new version of the sublime.

Hot dog steamers are a simple piece of engineering. At the bottom there is a heating mechanism—typically a metal coil, but sometimes live flames are involved—situated directly below a water chamber. The cook box, which has holes at the bottom for steam to rise through, sits above the water chamber and is often divided in half: one side for buns, one side for hot dogs. The heating mechanism heats the water; steam rises from the water chamber and fills the cook box; steam cooks the hot dogs and softens the buns. The best versions have slanted doors atop the cook box that direct condensation away from the buns and hot dogs. Remember: dry bread good; soggy bread gross.

Hot dog steamers seemed ubiquitous once—there wasn’t a convenience store or gas station or concessions stand that didn’t have one. But now they all favor commercial hot dog rollers (this is what they’re actually called), which turn out a product closer in texture to a Slim Jim than a hot dog. The vendors in the grandstand at Fenway Park still hawk steamed hot dogs, but I can’t justify spending $80 on a ticket to get my fix. Baseball is also the worst sport unless you’re drunk, and at $10 a beer, getting drunk at Fenway isn’t feasible either.

America’s dearth of steamed hot dogs is all the more depressing when compared with Montreal’s glut—the city loves steamed dogs so much that it once dedicated an entire week, in the dead of winter, to celebrating them. Known as steamies (or steamés), steamed hot dogs are the preferred variety in Montreal. They’re cooked on a steam table and topped with coleslaw. (Note: not with sauerkraut!) I called Tom Vriniotis—the second-generation owner of the beloved Montreal haunt Décarie Hot Dogs—to ask why steamies are so popular in his city.

“Maybe it’s because we have an abundance of water in Montreal, because we love to steam and boil everything,” joked Vriniotis. “It’s the method that’s been used traditionally here. It produces a hot dog with a better texture. It’s fluffier, and it’s juicier, too…. The difference between a steamed dog and a grilled dog is like the difference between a juicy burger that is dripping everywhere and a well-done burger that has the texture of rubber.”

Probably none of this tubed-meat anguish would have manifested itself if I hadn’t taken to drinking old-fashioneds at Harry’s New York Bar while living in Paris in my late 20s. I was drawn to the spot by its history as an expat bar—Hemingway drank there, and I’m a cliché—but I was sold on it when I noticed a stainless-steel-and-glass box resting on the middle of the bar. I found very good drinks and much American nostalgia at Harry’s, but most crucially I found steamed hot dogs slathered with spicy brown mustard.

I ate too many of those hot dogs the couple years I lived in Paris—I needed them!—but when I moved back Stateside I found myself, yet again, without. I’ve entertained buying a hot dog steamer for my countertop—it would be a better investment than the last kitchen appliance I bought—but the price tag has always proved a strong deterrent: Spending $250 (which is about 10 times my yearly hot dog budget) on something I’d use maybe four times a year would be a monumental waste of change. Now, I opt to boil my hot dogs. Not as satisfying as steamed hot dogs, but better than the alternatives.

I’ve had some success with hacking a hot dog steamer at home—placing hot dogs in a colander above boiling water and covering them with aluminum foil makes for a decent if not exact analog. (I suppose one could also use a stovetop steamer basket to achieve the same results, but I don’t own one and so can’t speak to this method’s efficacy.) Nathan’s Famous has ideas about steaming hot dogs on its website, but the recipe calls for browning on all sides. Steamed hot dogs should not be brown; steamed hot dogs should be the color of Bazooka bubble gum. Nathan’s recipe also calls for steaming the hot dogs in the water (which is called boiling in most circles)—this method would no doubt lead to all of the same woes of boiling (burst casing, wet rolls due to residual water left on hot dogs).

Short of moving back to Paris or taking up residency in Montreal or dropping a mint on a sporting event I don’t enjoy—or being the person who solves time travel—life will have to go on mostly void of steamed hot dogs, a reality that raises the question: Is a life without constant access to steamed hot dogs a life worth living?