Get a free recipe
Subscribe
Hasselback Everything
By: Jamie Feldmar Photos: Aaron Bernstein 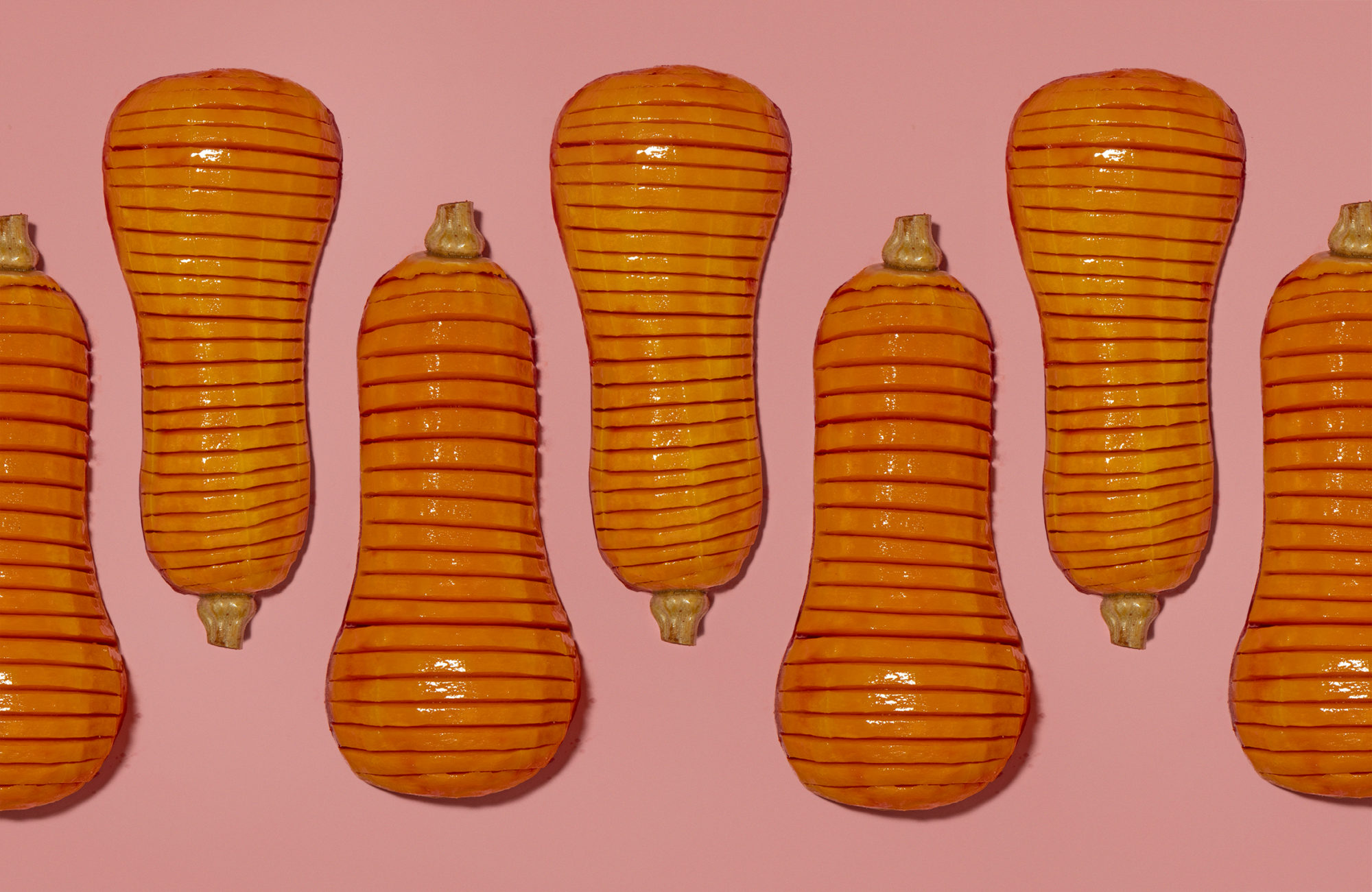 Just because you can hasselback something, should you?

Consider the potato: a modest root vegetable, a staple in many cuisines, not generally considered one of the world’s most attractive foods. Now consider that same potato with a few cosmetic enhancements: After a few nips and tucks, the once-homely potato becomes alluring, mysterious, and dare I say, sexy. Such is the power of hasselbacking, in which a potato is sliced like an accordion across its top side, lavished with additional fat and salt between each layer before roasting, and presented whole, like a precious gem.

Hasselbacking is a cooking method in which potatoes or other items are sliced not-quite-all-the-way through in thin, even layers, which can be stuffed or topped with additional flavorings. It’s a way of creating more surface area for flavors and creating additional texture. As a technique, it’s nothing new. The most widely circulated origin story is that hasselbackspotatis were first served in the 1950s at the Hasselbacken Restaurant and Hotel in Stockholm—and very few people noticed. For another half-century or so, it kicked around in pages of cookbooks and appeared on restaurant menus, largely without fanfare. And then, in 2011, something changed. It’s unclear why, exactly, but around that time, food blogs were abuzz with recipes for hasselback potatoes. Joy the Baker was into it. So was Gina Matsoukas, aka Running to the Kitchen. Adrianna Adarme of A Cozy Kitchen loved it. J. Kenji Lopez-Alt of Serious Eats set about making it even better.

At the time, recipe sites and personal food blogs were at the forefront of the new digital-first food media world; Instagram was barely a year old. It’s always been important to make food look good (“Appeal is half the meal,” I remember a culinary school instructor solemnly intoning years ago). And hasselbacking, with its orderly repeating pattern and beautifully burnished edges, excels in this department. But the technique’s merits don’t stop there.

“There is actually payoff to the technique for home cooks,” says Carla Lalli Music, a cookbook author and the food director at Bon Appétit. “You decrease the amount of time the potato needs to cook because you’re exposing more surface area to heat, and you’re able to get more flavor on the inside by filling the slits with fats and seasonings,” she says. “The finished product is fun to eat because it’s crispy on the outside and perfectly cooked inside, and the slicing pattern on top does look very attractive.”

Soon after the potato’s reemergence into the spotlight, recipe developers started playing around with hasselbacking other foods. Perhaps unsurprisingly, it was successful with other round and oblong vegetables, variations of which soon started flooding food feeds. BA hasselbacked a whole butternut squash, lacing it with bay leaves and chile. Hasselback beets became a more exciting way to present roasted beets with dill yogurt sauce. And even radishes, roasted and splashed with miso dressing, had their hasselback moment.

“I was up for the challenge of making hasselback things that weren’t weird or gimmicky. I really wanted to make the vegetable better in some way,” recalls recipe editor Ben Mims, who developed beet and radish recipes for Food Network Magazine. Mims says the technique is better suited to foods like root vegetables than, say, fruit. Or meat. Or pickles.

“This is the plague of the search-term-driven content monster.”

But soon thereafter, even more things started getting hasselbacked. Here’s the thing about making food content for the Internet: When something works, you replicate it. “This is the plague of the search-term-driven content monster,” says Lalli Music. “Hasselback starts getting popular, people start searching for it online, and publications start thinking about how to deliver.”

Headlines like this started appearing: “9 Things You (Probably) Didn’t Know You Could Hasselback” (avocado toast, queso bread, and hard-boiled eggs, somehow—thank you, Food52). Foods were stuffed into other foods (deli ham and Swiss cheese went into a giant dill pickle); often they weren’t even cooked (feta and mint jammed between slices of a watermelon wedge). Some of these creations seemed to stretch the definition (and the culinary benefits) of hasselbacking, but no matter.

Around this time, there was also an outpouring of next-level hasselback recipes from individual food bloggers and social media influencers with a healthy eating on the brain, positioning their creations as a fun way to make vegetables more appealing. Sugar Free Mom raves about this low-carb cheesy bacon zucchini hasselback; Healthy Happy Life touts the powers of BBQ hasselback tofu.

The popularity of hasselbacking among real-life home cooks reminds me of spiralizing, a technique that’s disparaged by chefs but beloved by legions of Americans responsible for getting dinner on the table every night. “Chefs see it as gimmicky, and they don’t want to be considered uncool by doing something that mommy bloggers are into, because that’s the antithesis of how they want their food to be perceived,” says Mims, who experienced a similar sensation when developing recipes for his air-fryer cookbook. “But is it really frivolous if it gets people to eat more vegetables?”

Not all chefs are opposed to hasselbacking: Tracy Chang of Pagu, a Japanese-Spanish restaurant in Boston, serves a hasselback patatas bravas appetizer, smothered in house-made hot sauce and aioli and garnished with togarashi spice. “Hasselback is a nice back-pocket trick: It’s relatively easy but quite high-impact in terms of visuals and flavor,” she says. “It’s definitely one of our most popular dishes. People eat with their eyes, and once guests see it go out, everyone wants to order it.”

Therein lies the crux of the issue with hasselbacking: It’s a technique valued as much for the way it looks as the way it tastes. So it was perhaps inevitable, in this increasingly click-driven landscape, that hasselback would eventually cross the line into gimmick territory, that it would eventually be used on a cheese-puff-coated chicken breast in a BuzzFeed Tasty video.

“A lot of our hasselback content is developed purely for its potential to go viral.”

This is not hasselback’s fault as much as it is a reflection of the reality of how the digital media sausage gets made, in which eyeballs are prioritized above all else. “A lot of our hasselback content is developed purely for its potential to go viral,” admits Alexis deBoschnek, senior test kitchen manager at Tasty. “Our producers decide what to make based on the success of past content. So if a hasselback potato recipe performs well, we’ll immediately put all of our resources toward creating other hasselback things. We flood the landscape with food trends, and as soon as our audience signals they’re no longer interested, we move on,” she says.

This is not to say that hasselbacking is bad or wrong or has jumped the shark. “It’s been around for a long time,” says Mims. “It got popular and still is. But it’s not so popular that it’s reached the backlash-to-the-backlash level yet, and I’m not sure it will.” The answer to whether or not you should hasselback something is a personal matter. There are all kinds of reasons to try it: for the likes, yes, but also, sometimes, to surprise and delight at the table. At the end of the day, Lalli Music recommends a simple litmus test for deciding what should or should not get the treatment: “Ask yourself, would I actually make this? And would I tell my neighbor, best friend, or aunt that they should make it? Otherwise,” she says quietly, “who is it for?”