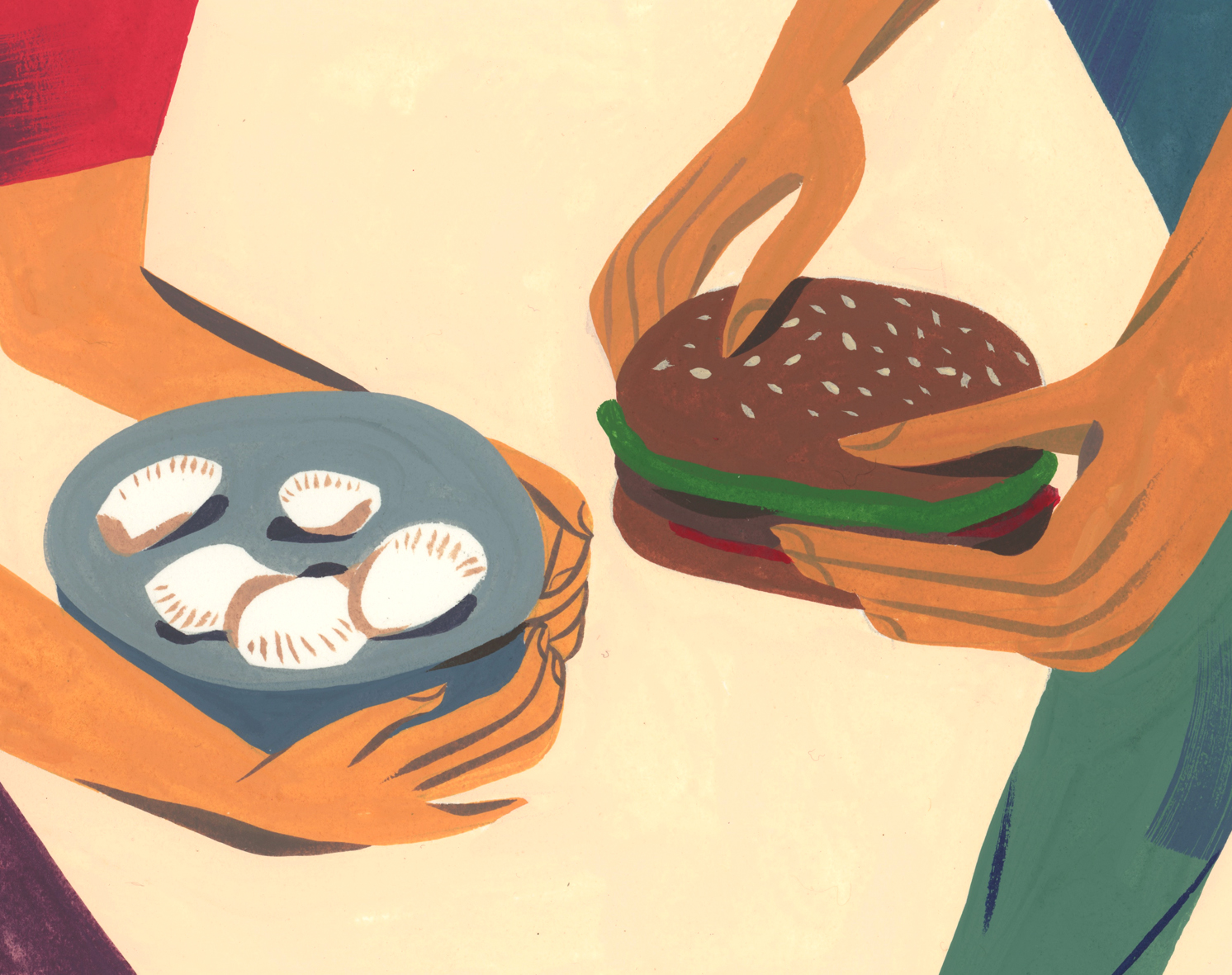 Sometimes the fairy tale version of our family history is the one we want to believe.

In my attempt to understand my family’s history—and the sequence of choices that led to me being born—I land on a story about hamburgers. It goes like this: After they’re picked up by a foreign naval vessel off the coast of Vietnam, my grandparents have to make a choice about where they’ll be dropped off. They can either go with the other Cantonese-Vietnamese refugees to Hong Kong, which is still under British rule, or head to Guam and ultimately the United States. My grandfather had a solution—go to his seven kids and ask, simply, what do you like more: hamburgers or dumplings? Their hands shoot up. There are shouts of excitement. Hamburgers! Hamburgers! And so they go to the United States. I love this story and grew up telling it to anyone who asked me where I came from.

The hamburger narrative is supported by the newspaper coverage of my family’s arrival in sleepy Freeport, Illinois, which they keep clippings of in a photo album next to baby pictures and wedding invitations. It’s funny to see them arranged in stiff group portraits staring every which way, the big news in a town that didn’t seem to have had much to report on until they arrived. When asked by a reporter about how his family is acclimating to the town, my grandfather reveals that the kids love burgers, so they’ll be just fine in their new home. There are photos of him at church potlucks, grinning while holding a paper basket of fried chicken, and my mother fondly remembers the awe she felt while looking at all of the canned vegetables lining their sponsor’s pantry. America was something they greeted with open mouths, so the burger story seemed like a fitting introduction. But before all this was Vietnam.

Shortly after the fall of Saigon in 1975, my grandparents, Hoa and Tuong Nguyen, fled from their home in South Vietnam with their seven burger-loving children and not much else. Their coastal hometown, Vũng Tàu, was just 60 miles away from the capital and was known as a popular and hospitable vacation spot for U.S. military: It would be a logical next stop for the Viet Cong. The plan, as my grandfather, Tuong, recalls it, was to hitch a ride on a fishing boat and lay low on a nearby island until the conflict blew over and the invading army got pushed back. It wasn’t much of a plan, he admits. And they had no way of knowing that things would only get worse from there. My grandfather, a native of Thôn Xuân Dục, a dusty town in northern Vietnam, had already fled the Communist regime once before, 21 years prior. They don’t like people who stick out, he says. In his village, he’d had a reputation as a shit stirrer: He’d famously gotten into big trouble with the local rich family for daring to flaunt his new, hard-earned bicycle in front of them before they’d gotten a chance to buy their own. So when the Viet Cong took over, he knew it’d be bad news for him. He made a quick exit southward and joined the South Vietnamese army, ultimately making his way to Vũng Tàu, where my grandmother and her family lived.

When my grandfather got to Vũng Tàu as a bachelor, he realized that he just couldn’t take care of himself in a town where he barely knew anyone, so he decided he needed to get married. Naturally, he went to the local high school and hung around the entrance until he caught sight of the 15-year-old Cantonese-Vietnamese girl who would become my grandmother. She refused to go out with him, so he inserted himself into her family’s life, joining them for dinners of her mother’s humble cooking—steamed Hainanese-style chicken, thịt kho with rice, and functional stir fries, mostly—and befriending her brother so that her family would pressure her into accepting.

I first heard about this while eating pho at my grandparents’ house, and I’m pretty sure my jaw dropped so low that a rivulet of broth trickled out of my mouth. I looked at my grandmother’s backside as she hunched over a basket of rice noodles; I had no idea what to even start asking. How did my grandmother feel about being so aggressively pursued by a man all the way to her dinner table? Was my grandfather really That Older Dude who creeped on high-schoolers, the kind of guy I was warned about talking to? She says she never really put much thought into her relationship with my grandfather; it was just how things went for most people back then.

During the war—from 1954 to 1975—my family’s lives were intimately tied to the American army, to the point where they’d even have G.I.s over for dinner sometimes. My grandfather worked for them for many years as a construction worker, and the Americans, who loved his humor and charisma as much as they loved my grandmother’s canh chua, would often gift him with exotic imports: peanut butter, apples, and ice cream. My mother recalls the wonder she and her siblings felt on the rare occasion when they got to try some, all their skinny arms reaching with spoons into an ice cream bucket to scoop out the melted vanilla soup. For fun, my grandfather would drive the kids around town on his moped, two at a time. The unease of the war was still present, but they were so far from the front lines that the conflict didn’t feel so real—until it was.

As soon as they heard that the Viet Cong were on their way to Vũng Tàu, my grandparents pulled all the kids and my maternal grandmother together and paid for a spot on a friend’s fishing boat. In their haste, they left all of their possessions and assets behind. The boat was packed with five other families from their village and, as my family members recall, stank of body odor and vomit. They stayed out on the water overnight but took a much-needed break by anchoring at a nearby fishing village. While they lingered, my great-grandmother refused to go back onto the water and went back to the family home with my grandfather while the rest of the family waited by the boat. But when night fell, so did the rockets: The Viet Cong had arrived. Dodging smoke, a hysterical crowd, and burning bushes, my grandfather ran back to his family and packed everyone back into the boat.

After a few days out at sea, the fishing boat encountered a naval ship. When I talked about this story with my cousins, we couldn’t agree on whose it was. Was it American? Malaysian? Australian? As with most aspects of the Vietnam War, the big details didn’t matter to us as much as the little ones. All we knew was what our relatives told us. It was thrilling to imagine our parents and grandparents climbing up out of the fishing boat, either via rope ladder or being pulled up the massive side of the ship in sacks tied to ropes. We’d heard tales of our oldest aunt, Tuyết, flirting with the sailors to finagle extra rations for her and her siblings. We didn’t talk about the napalm, the land mines, all the things our family was actually fleeing from.

This part, where everyone’s on the naval ship, is when the hamburger story kicks in. I ask my grandparents about it, eager to hear their take. My grandfather laughs awkwardly and asks, “What are you talking about? Are you crazy?” After poking and prodding at them, asking if maybe there was a hamburger anywhere in the vicinity of that scene, I have to accept that the whole thing was a fiction: both the vote and the big question—“Hamburgers or dumplings?”—that I always thought was the key to understanding how and why my family got here. A group family photo, taken in Rockford, Illinois, in 1979, four years after arriving in the United States.

It was a fairy tale I’d told myself as child that had somehow embroidered into fact, and it had become so convincing to me that I’d never bothered to ask anyone about it until just then. It just seemed so right, so poetic for a family that wholeheartedly embraces the delicateness of Vietnamese cookery as well as the simple pleasure of Taco Bell’s bean burritos. Perhaps it was easier for me to believe that the family that I knew came about because of hamburgers; perhaps it was easier to ignore the reverberations, trauma, and anxiety of a civil war that I could feel innately without having experienced firsthand.

I still want to hang onto my hamburger theory, even though I know it’s likely incorrect. It seems so typical of the communal memory-making that my family plays at every time we try to discuss the past, with the way we decide what really happened through arguments and majority votes. I don’t want to think of Henry Kissinger, Gerald Ford, Ho Chi Minh, and the other power players when I think about what my family went through: I want to think about us, and the choices we made to get to where we are.