Get a free recipe
Subscribe
Halwa vs. Halvah: An Investigation
By: Khushbu Shah 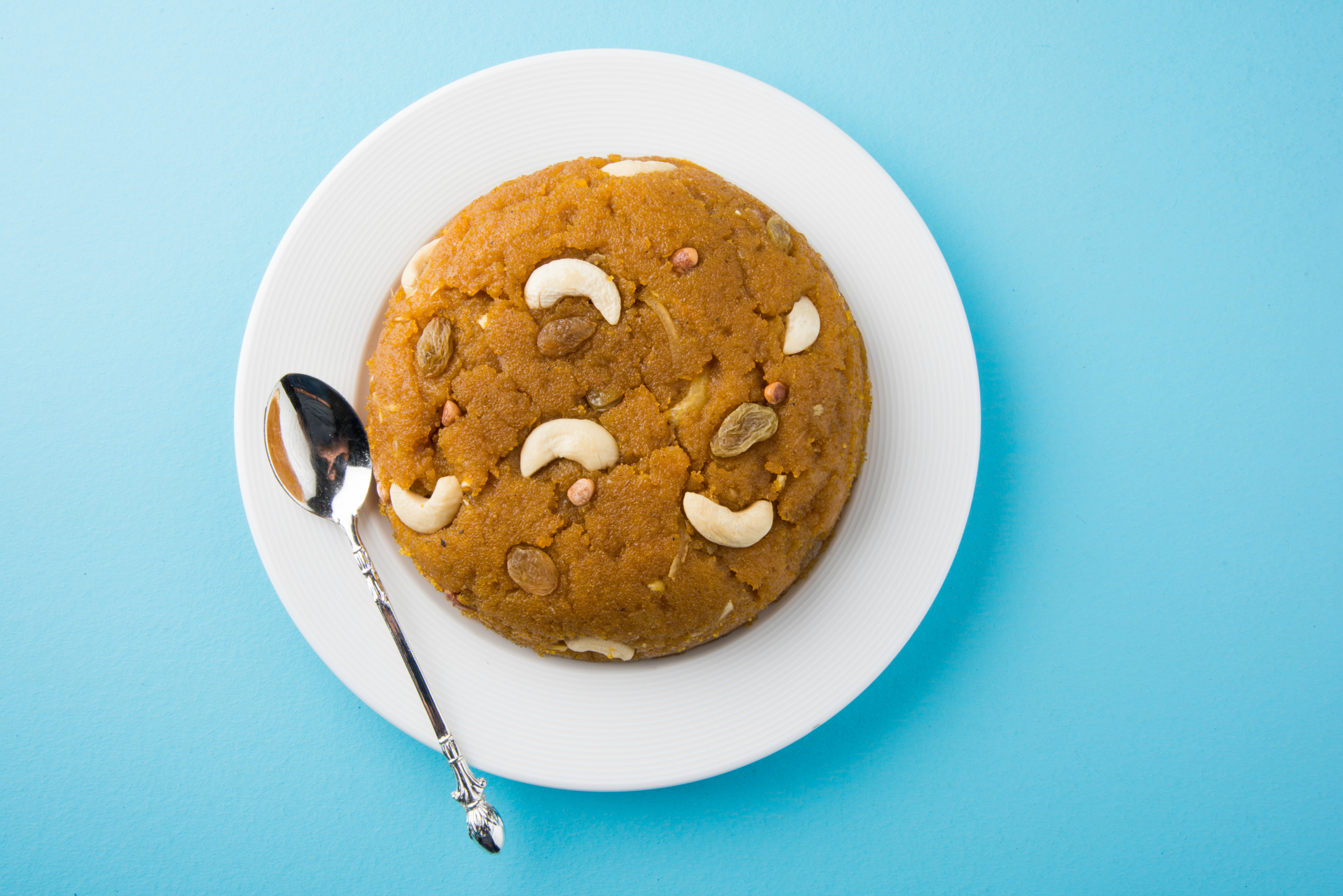 Are they different spellings of the same sweet, two variations on a theme, or two different things altogether?

My sophomore-year roommate and I were total polar opposites: I was premed, battling through too many organic chemistry equations, while she studied for a yoga final as part of her musical-theater major. But one sunny October afternoon, in the narrow kitchen of our New York City dorm room, we discovered we had a mutual love of halvah—or so I thought. She pulled a tub from the cabinet, and when I peered inside I was confronted by a beige, dry mass that looked more like an experiment from my chem-lab exam than dessert. I found myself even more confused when all I could smell was sesame. It was ridiculously delicious and nothing like the fudgy pudding-esque dessert I grew up eating by the bowlful.

My roommate was gifted the halvah by a friend who had recently returned from a trip to Israel, and like many, I had assumed that halvah and halwa (not to mention halva, helva, and halava) were all different names for the same dessert. But in South Asian cultures, halwa rarely, if ever, involves sesame seeds. Instead, it is a pudding-like mixture made in its most basic form from a combination of ghee, sugar or jaggery, and some form of flour, cooked over a stove top until thick and creamy, and eaten with a spoon.

South Asians have this uncanny ability to turn pretty much anything into halwa. It is basically the hidden superpower of my people (that and drinking an incredible amount of chai). As long as something can be cooked down with ghee and sugar, it can be turned into halwa—nothing is off limits. Some of the most common versions include halwas made from lentils (namely moong daal), vermicelli noodles, and vegetables like carrot and bottle gourd. Someone has even figured out how to transform kiwis and sliced bread in halwa.

Halavah at the Carmel Market in Tel Aviv is different from moong dal halwa (pictured above). But it’s also kinda the same.

Halwa is not an everyday dessert in the way, say, a pint of ice cream is after a bad day, but it’s not reserved solely for special occasions like an île flottante. Instead, it tends to live in the realm of small celebrations. My first vivid childhood memories of halwa were on the weekends after events at the local Hindu temple. We’d all file into the basement for lunch and without fail there was always sheero (also frequently called sooji halwa) at the end of the table served for prasad (a religious blessing). I was bad at praying, but I was great at consuming sheero. Essentially a dense but soft porridge made from semolina, ghee, and sugar, the versions I loved best were always spiked with cashews and raisins.

This felt like a world away from the candy-like nutty Israeli halvah my roommate introduced me to. The version she showed me is more often than not pareve (a classification in Judaism denoting that a food is dairy-free), crumblier in texture, and frequently eaten as a sweet treat or baked into other desserts. So how did they have essentially the same name even though they, like me and my roommate, were essentially the polar opposite of one another?

I emailed Ken Albala, a food historian and professor at the University of the Pacific, who had a surprisingly simple explanation. He believes the word “halva” (as well as the dish itself) is Persian or Arabic in origin and simply means a sweet, semisolid fudge that can be made from practically anything. Albala believes the dessert traveled to India and Pakistan with the Mughal empire and flourished with local ingredients like carrots. In Greece and Turkey, halvah is usually made from semolina and honey. Israeli halvah’s sesame base can be attributed to trade routes. “Sesame is native to Africa and was imported to the Middle East via Egypt and then grown in the Middle East. So you find it in the cooking a lot, like tahini.” Sesame was never quite as plentiful in South Asia, making alternative ingredients more popular.

Regardless of how different they are in taste and texture, I’ve come to love both of these sugary cousins equally. Halvah has become one of my favorite ice cream toppings—crumbled and spooned over some soft serve—while I still find myself craving bowls of sooji halwa and carrot halwa (ideally straight from the fridge) on weekend mornings. I’m just waiting for the day someone figures out how to make halvah halwa.