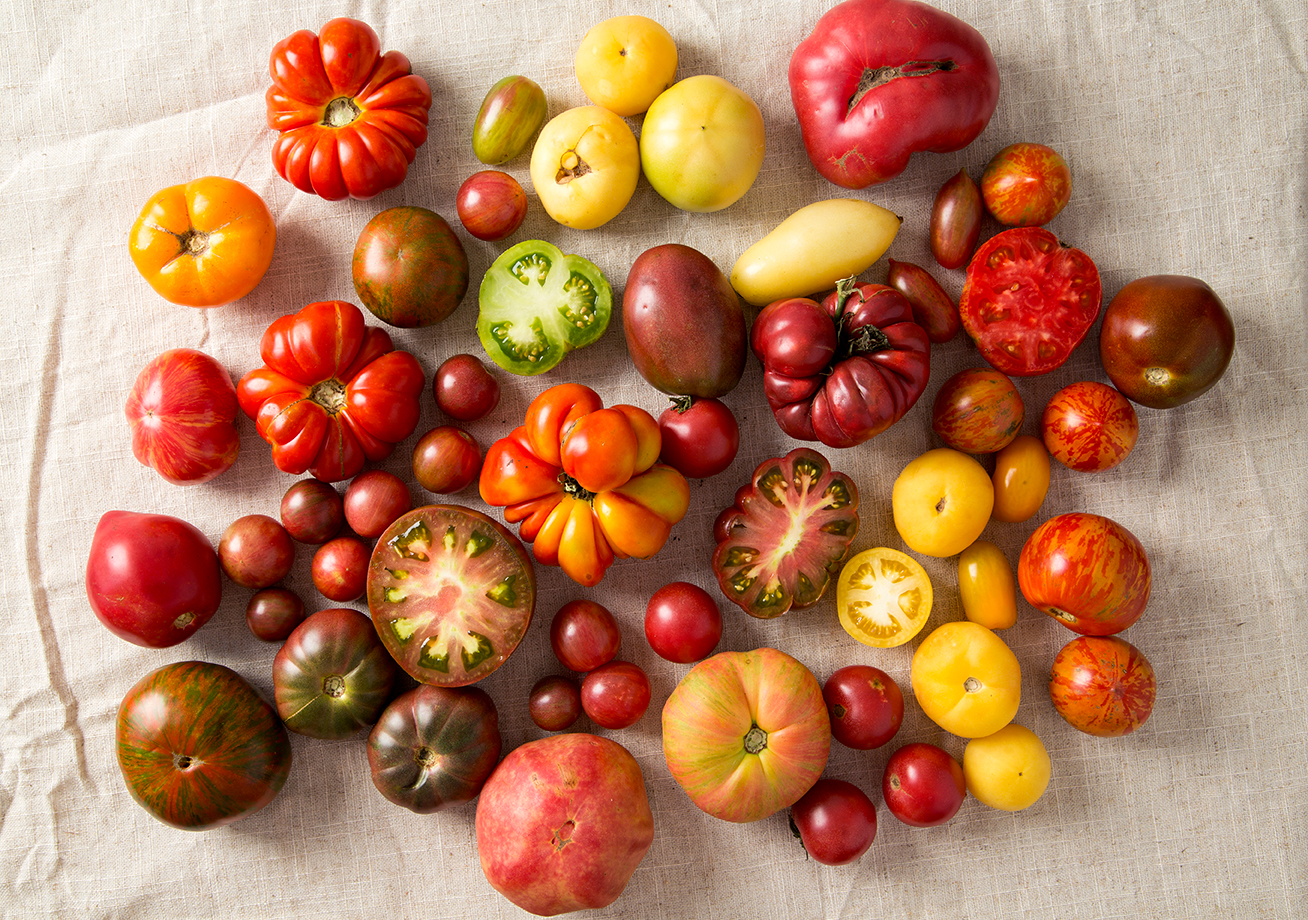 How does one shop for and cook with heirloom tomatoes when no two are alike? Here’s a guide to navigating the sights, smells, and weights of the many varieties out there.

For those of us who mark the seasons with food, summer usually means an abundance of corn, zucchini, and tomatoes. In particular, summer means heirlooms—those sweet tomatoes grown from seeds that haven’t been hybridized for commercial qualities like shelf life, color, and uniform appearance.

According to Amy Goldman, author of The Heirloom Tomato: From Garden to Table, there are close to 6,000 varieties of cultivated tomatoes. Their names sound like something from an old storybook—Cherokee Purples, Green Giants, Brandywines, Great Whites, German Pinks, Banana Legs, Paul Robesons, and Green Zebras.

Heirlooms not only have funny names; they can be kind of funny-looking, too. In fact, they’re quirky in many ways, from color (red, orange, green, purple, yellow, black, striped) to texture (smooth, ridged, wavy, dented, lumpy) and shape (oval, round, egg, plum). But what they lack in looks they make up for in big, bold flavors—sweet, juicy, acidic, smoky, and zingy—making them ideal for eating on their own, like an apple, or sprinkled with some coarse sea salt and a drizzle of green olive oil. All good.

New York City chef Bill Telepan favors buying from heirloom tomato rock star Tim Stark of Eckerton Hill Farm, one of the most prolific and well-known heirloom tomato farmers at New York City’s Union Square Greenmarket. Stark has been growing over 100 varieties (both heirloom and hybrid) since the mid-’90s. “I still remember my first chef job at Ansonia and getting a call from a friend telling me I had to go to the market and check out Tim’s tomatoes,” says Telepan. “They were amazing. And still are.”

When shopping, keep in mind that heirlooms are more fragile than ordinary tomatoes; their skin is very thin, so handle with care. Give them a once-over and make sure the skin is not broken—cracks are okay, but avoid those seeping juice. Telepan says he feels them by weight. “If a tomato feels heavy, that means it’s going to be juicy.” Also, better to get a tomato that’s a bit underripe than one that’s overly ripe and might spoil before you can use it.

Heirloom tomatoes are best stored at room temperature (not in the refrigerator) and eaten raw. Slice them thick for a BLT or a simple Julia Child special—tomato and mayo between bread. Their color palate makes them ideal for a striking summer salad, with olive oil, sea salt, and torn basil. Telepan says he takes heirloom cherry tomatoes and marinates them in red wine vinegar and garlic and tosses the mixture over a penne with pesto. He says they are also great tossed in spaghetti, with sautéed garlic, basil, and pecorino.

When you’re browsing the farmers’ market, the sheer number of heirlooms can be a bit intimidating. Here are some of the most common (and delicious) ones you’re likely to find.

Cherokee Purple
Sometimes included in the “black” category—a tomato with a deep purple or black skin—this variety is known for its complex flavor: sweet and a bit smoky.

Green Zebra
These bright green tomatoes are sometimes striped with yellow and have a signature super popular zippy tang of acidity.

Brandywine
These are large, heavy tomatoes with a nice balance between sweetness and acidity.

Black Brandywine
These beefsteak-style tomatoes, blackish to purplish in color, are among the most popular heirlooms. They’re extra large and juicy, with an earthy, sweet flavor that makes them ideal for just about anything from sandwiches to salads.

Mortgage Lifter
Known for its mild sweet flavor and meaty texture, this pink-fleshed beefsteak can tip the scale at two pounds. Telepan explained the name this way: “The story goes that these tomatoes were such a great variety that the guy who started selling them paid off his mortgage,” he said. “They are really good.”

Amish Paste
This is a good cooking tomato. Telepan says it would give a San Marzano a run for its money.

Striped Cavern
Shaped more like a pepper than a tomato, these heirlooms are beautiful, with bright cherry red skins and sunny yellow stripes. Like peppers, they actually have large open cavities and are terrific stuffed and baked.