Get a free recipe
Subscribe
Grilling Is Never Easy
By: Paula Forbes 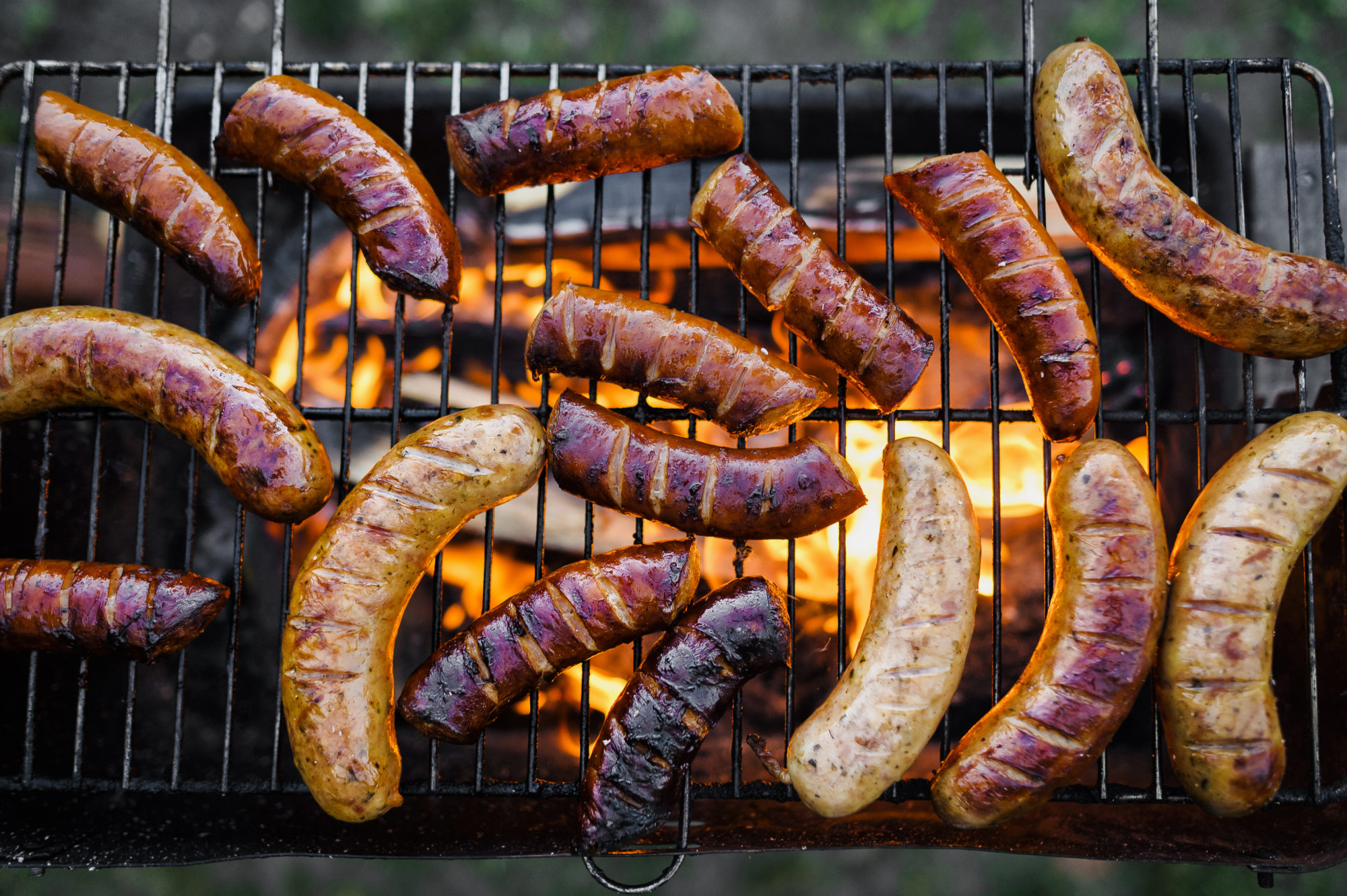 It takes serious skill to manage a cooking fire. Why do so many cookbooks insist it’s simple?

“GRILL & CHILL,” screams the cover of Taste of Home magazine’s current issue. The checkout line at my local supermarket is filled with such exhortations all summer: “Easy Grilling, All Week Long!” “The Simplest Barbecue for Summer!” “BBQ, 30 Minutes or Less!”

It’s a nice impulse. It’s a nice way to sell magazines. Summer is laid-back, and of course we want summer cooking to be laid-back, too. But every year, surrounded by articles and cookbooks that promise a backyard cook’s path of least resistance, the more skeptical I become. I just can’t convince myself that grilling—and its more finicky indirect cousin, smoking—are anything close to easy. Not only do these techniques require entirely different skills and equipment than traditional kitchen cooking—starting and maintaining a fire is more complicated than turning the knob on your stovetop—most home cooks in the U.S. can only practice them a few months out of the year. What’s so easy about that?

Recipes for the grill or smoker need to take into account the unique nature of live-fire cooking. Typically, recipes operate with a common language: You can “bring to a boil, then reduce to a simmer” or “heat oven to 350°F” in more or less the same way in any kitchen—whether you have a cheap rental oven in a New York City studio or a tricked-out gourmet range in a suburban McMansion. Cooking over a live fire, on the other hand, has broader variables. Journalist and former Lucky Peach editor Peter Meehan, who is working on a book about barbecue and grilling with Clarkson Potter, says, “With grills, anything goes, from the permanently installed grill at your local public park to something a local metal worker sells on the side of the highway.” From Around the Fire

And just as grilling and smoking equipment varies wildly, so does the skill of their operator. A fire needs to be maintained: It’s not as simple as turning a knob on a stove, and adjustments are often required during cooking. How dense is the wood you’re using? What type of charcoal do you need? Vents: open or closed? Is there a breeze? Is it raining? Is the fire too cold? Too hot? Even gas grilling, while easier to manage than charcoal or wood, is subject to weather and cooking-surface hot spots. The language of the live-fire recipe must factor in these uncertainties.

It therefore follows that live-fire cookbooks must enumerate technique—at length. For this reason, cookbook author Jordan Mackay (of Franklin Barbecue: A Meat-Smoking Manifesto and the upcoming Franklin Steak) doesn’t think live-fire cooking makes for good magazine or online recipes—the short and scrollable recipes living in recipe databases, clicky listicles, and Pinterest boards. “Live fire is best described in books,” says the author, who dedicated nearly 150 pages to technique before getting to Franklin Barbecue’s first recipe. “You need to write about how to build a good fire and how to tend it. Writers need to pay attention to the details, and take the time and space to explain [them]. And that just gets readers halfway there. The other half comes from their willingness to put in the work.”

This isn’t a recent approach. Take 1955’s The Complete Book of Outdoor Cookery by Helen Evans Brown and James Beard, a book that David Kamp notes in The United States of Arugula “capitalized on an American craze for backyard barbecues.” (A craze Beard himself arguably ignited!) The book spends the first four chapters illustrating technique: Charcoal Grills and Equipment, Fire and Fuel, Technicalities, and a Guide for Charcoal Broiling and Roasting (not to mention an appendix that explains how to build a brick pit in your backyard) before launching into steaks and other recipes.

Brown and Beard’s first four chapters underscore how important skill-set development is in a live-fire cookbook. The duo lays a thorough technical foundation; the recipes that follow are minimalist. For example, this is the entire Rack of Lamb recipe: “The rack, which is the undivided rib section, is another fine cut for roasting over charcoal. Roast it rare—between 140° and 150°—and serve it with tiny onions cooked in cream, and mushrooms grilled with parsley butter.” That’s a grand total of seven words dedicated to actually cooking the lamb; the reader would be utterly lost without the chapters of technique that preceded it. With them, this brief instruction is plenty. Between Outdoor Cookery and Franklin, however, grilling books shifted their focus from technique to recipe. In 1998, Steven Raichlen’s Beard Award–winning Barbecue Bible became a gonzo best-seller of a grilling book if ever there were one. And while Raichlen himself is no slouch on technique, Bible and its boast of “OVER 500 RECIPES!” inspired a slew of ’90s and ’00s copycats: books with huge numbers of recipes in the title, often published by magazines (Southern Living) or brands (Betty Crocker, charcoal companies). These cookbooks exalt the recipe at the expense of technique, often directing readers to prepare grills to “manufacturer’s instructions.” Their recipes illustrate rubs and marinades, cook times and sauces; technique is almost an afterthought.

For example, Betty Crocker Grilling Made Easy (2002; “200 SURE-FIRE RECIPES”) dedicates about three times as much page space to grilling gadgets as it does to explaining the difference between direct and indirect grilling. These techniques are cited in almost every recipe in the book. And Southern Living Secrets of the South’s Best Barbecue (2007; “645 GREAT RECIPES!”) barely explains how to use a smoker. Here’s what it says on temperature maintenance: “The amount of charcoal needed depends on the size of the smoker, its heat retention, and the weather. You’ll need to add charcoal during cooking to maintain the right temperature.” That’s it. Good luck!

Says Mackay, “Live-fire cooking is not for the type of home cook who meticulously follows recipes and lacks the confidence to adjust or alter the instructions if it becomes necessary to do so.” Technique and recipes must go hand in hand, allowing the home cook to pivot as the fire cools or heats up. Stacy Adimando, coauthor of the excellent Around the Fire, says that in addition to technique, she tries “to go about achieving recipe precision by giving readers visual cues and more ways to test for doneness beyond just checking the clock.” Meehan agrees that live-fire recipes must allow for wiggle room: “Part of the challenge is knowing what variables matter and don’t, and trying to make the recipes as helpful from a technique perspective as possible. [Explaining] the underlying principles of how fire and smoke work, along with some rough parameters, is the way to make the recipes work for the greatest number of people.”

All of this may make grilling a simple Saturday steak seem daunting, but the right cookbook can be a capable guide. This way, you should be able to get dinner on the table regardless of whether your fire-management skills are up to par. The good news is, you really only need one great live-fire cookbook to learn the technique. The rest, as Mackay reminds me, is practice.

Good Barbecue and Grilling Books!
1. Project Smoke and Project Fire by Steven Raichlen
Raichlen is still the master, and these fantastic twin titles bring his attention to detail into the 21st century. Specialize with a deep dive into grilling (Fire) or barbecue (Smoke), or add both to your collection to become a live-fire champ.

2. Franklin Barbecue: A Meat-Smoking Manifesto by Aaron Franklin and Jordan Mackay
The gold standard for barbecue books. Start here to get your smoking technique down, and then expand your recipe repertoire with additional titles.

3. Meathead: The Science of Great Barbecue and Grilling by Meathead Goldwyn with Greg Blonder
Live-fire, with a side of science. Goldwyn and Blonder do plenty of myth-busting—can you really tell if meat is done by poking it with your finger? How long does barbecue sauce keep?—and serve up some great recipes alongside.

4. Around the Fire: Recipes for Inspired Grilling and Seasonal Feasting From Ox Restaurant by Greg Denton, Gabrielle Quiñónez-Denton, and Stacy Adimondo
If you’re looking for something a bit more inventive, this book of recipes from Portland, Oregon, restaurant Ox serves up modern, Latin American–inspired recipes that don’t skimp on technique.

5. Charred & Scruffed by Adam Perry Lang and Peter Kaminsky
Charred & Scruffed explores fun techniques like cooking for directly on the coals, or constantly turning meat during cooking to develop a flavorful crust. A great pick for those who have the basics down and are looking to experiment.

Paula Forbes has reviewed cookbooks for ten years, and her reviews have appeared in Eater, Epicurious, Lucky Peach, and Food52. She writes a weekly cookbook newsletter called Stained Page News, and her first book, The Austin Cookbook: Recipes and Stories from Deep in the Heart of Texas, is out now from Abrams. She lives in Austin, Texas with one man, one dog, two cats, and, at the moment, more okra plants than she knows what to do with.