Get a free recipe
Subscribe
Grilling a Whole Vegetable? Toss It on the Coals.
By: Anna Hezel Photos: Martin Nordin 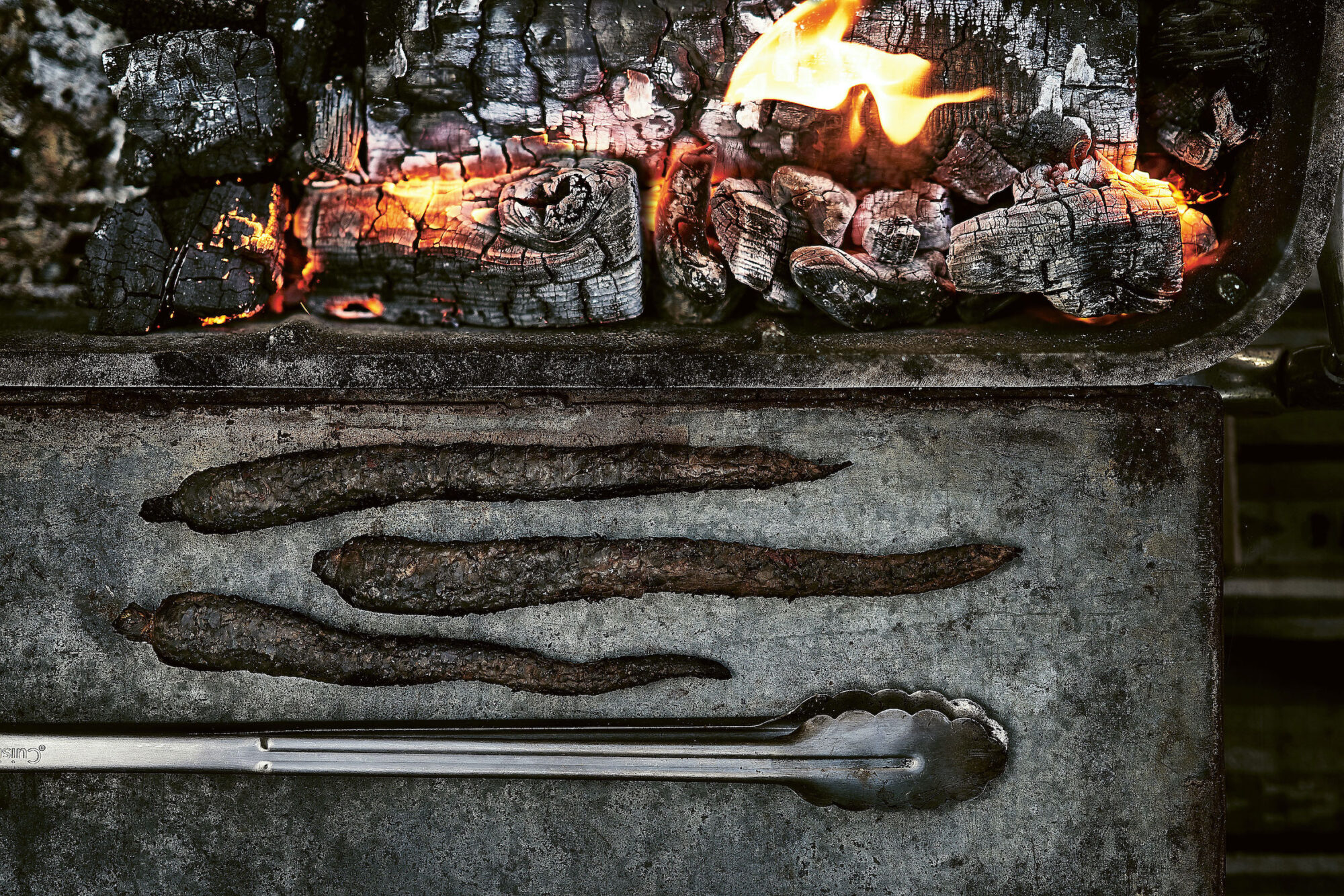 The technique behind Spanish escalivada can also transform your carrots, potatoes, and heads of cabbage into tender, smoky masterpieces of the firebox.

In the United States, grilling is supposedly synonymous with leisure time. Homeowner’s insurance commercials and suburban sitcoms tell us we’re supposed to effortlessly fire up the grill on a Sunday evening, turning out a fully formed meal while lazily sipping an IPA or chatting with neighbors over the fence. But as Paula Forbes wrote for TASTE a few years ago, grilling really isn’t all that easy—especially when you’re looking to hit the perfect medium-rare shade of red on the inside of your rib eye, or trying to keep your teriyaki chicken thighs from soaring above 165°F and drying out.

But when you set your sights on the plant kingdom, grilling really can be relaxed without sacrificing any of the flavorful results. And better yet, you can often skip the whole tenderizing marinade step that sometimes causes stress when looking to the Weber. Just throw that head of savoy cabbage or celeriac root straight on the coals or on your grill (or campfire), and let the heat draw out the juices and caramelize the edges.

“You get less control, which is kind of fun, because you’re just dealing with the elements,” says Zach Schulz, the chef at New York’s 232 Bleecker, where eggplants, beets, pineapples, and carrots have been given the coal-roasted treatment. 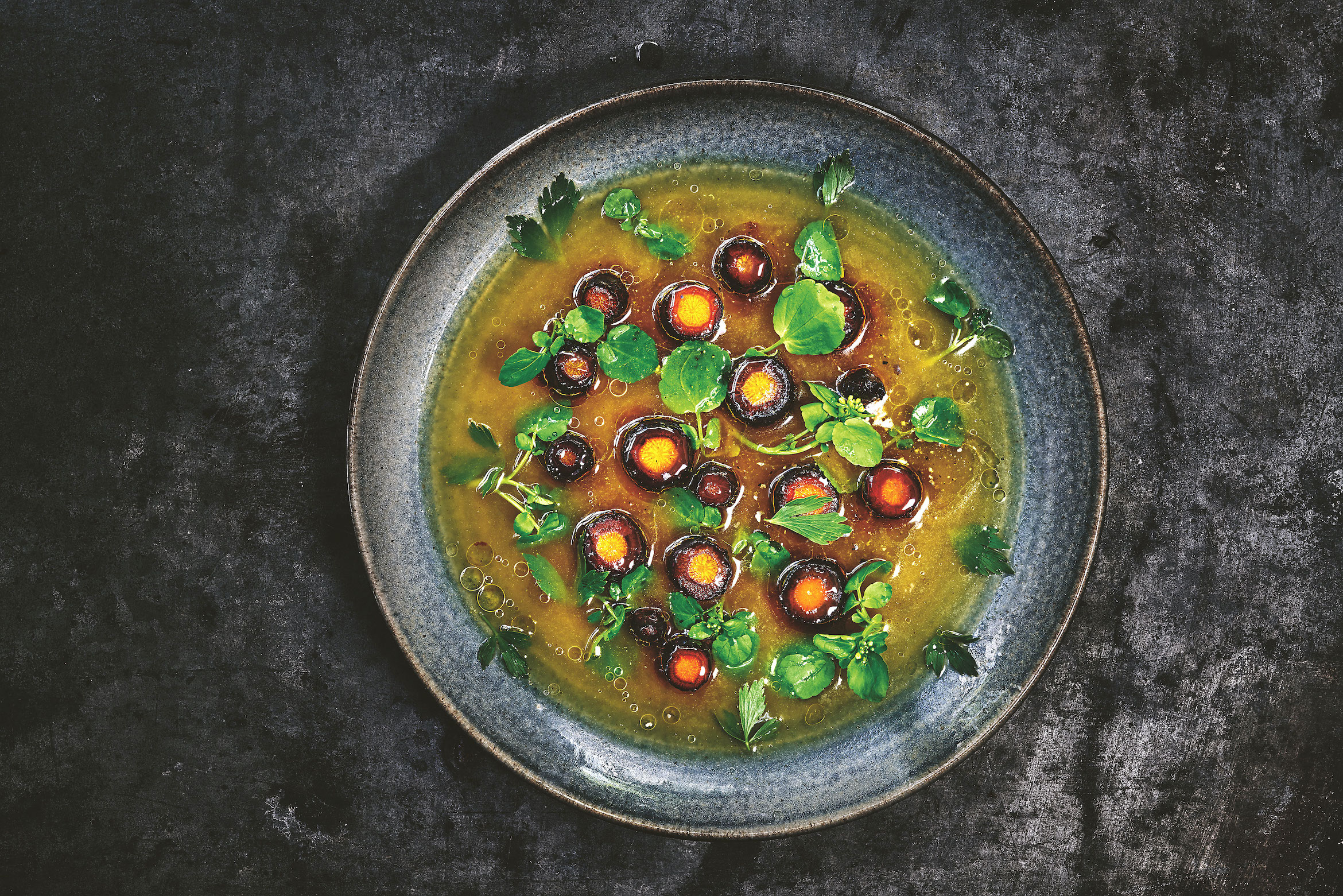 In Martin Nordin’s The Green Barbecue Cookbook, the technique is used again and again to soften fruits and vegetables, infuse them with smoke, and concentrate their sugars (sometimes before a brief stint over indirect heat to finish cooking for an ideal texture). The skin of purple carrots is burnt to oblivion before being rubbed away—a quick, impactful way to cook the carrots before cutting them into tiny bull’s-eyes and serving them in a turmeric lovage broth. (I would also happily eat one of these carrots whole, wedged in a hot dog bun, or drizzled with plenty of garlicky lime dressing.) Pineapples are enveloped in a cloak of black char before they’re sliced open to pair with rum coconut cream (Nordin also recommends adding the fruit to cocktails and tacos).

The move is a bit like the Catalan technique of escalivada, where whole bell peppers, spring onions, and eggplants are nestled among the embers of a fire and abandoned for an hour or two to soften and wilt, before the vegetables’ skins are rubbed away and their jammy insides are draped with olive oil and sherry vinegar. The skins of the vegetables become an active tool in the cooking process, buffering the insides from the coals.

“The vegetables create a charred other layer that protects the inside,” Nordin advises. “It also gives the vegetables a smoky and caramelized flavor in the layer just beneath, and then lets the inside cook within itself, getting a richer, more concentrated flavor.” To capitalize on that ultra-flavorful layer just inside the skin, Nordin recommends either using a very sharp paring knife to cut away the blackened exterior or rubbing it gently away with rubber gloves.

And while you don’t need to strive for quite the same level of precision that you might while cooking a beer can chicken or a rib eye, keeping a thermometer handy can be helpful. “A rule of thumb is that the greater the density of your vegetable, the higher the core temperature should be when it is cooked,” says Nordin. “A potato should ideally exceed 200°F, whereas zucchini or bell peppers are at their best at 170°F.”