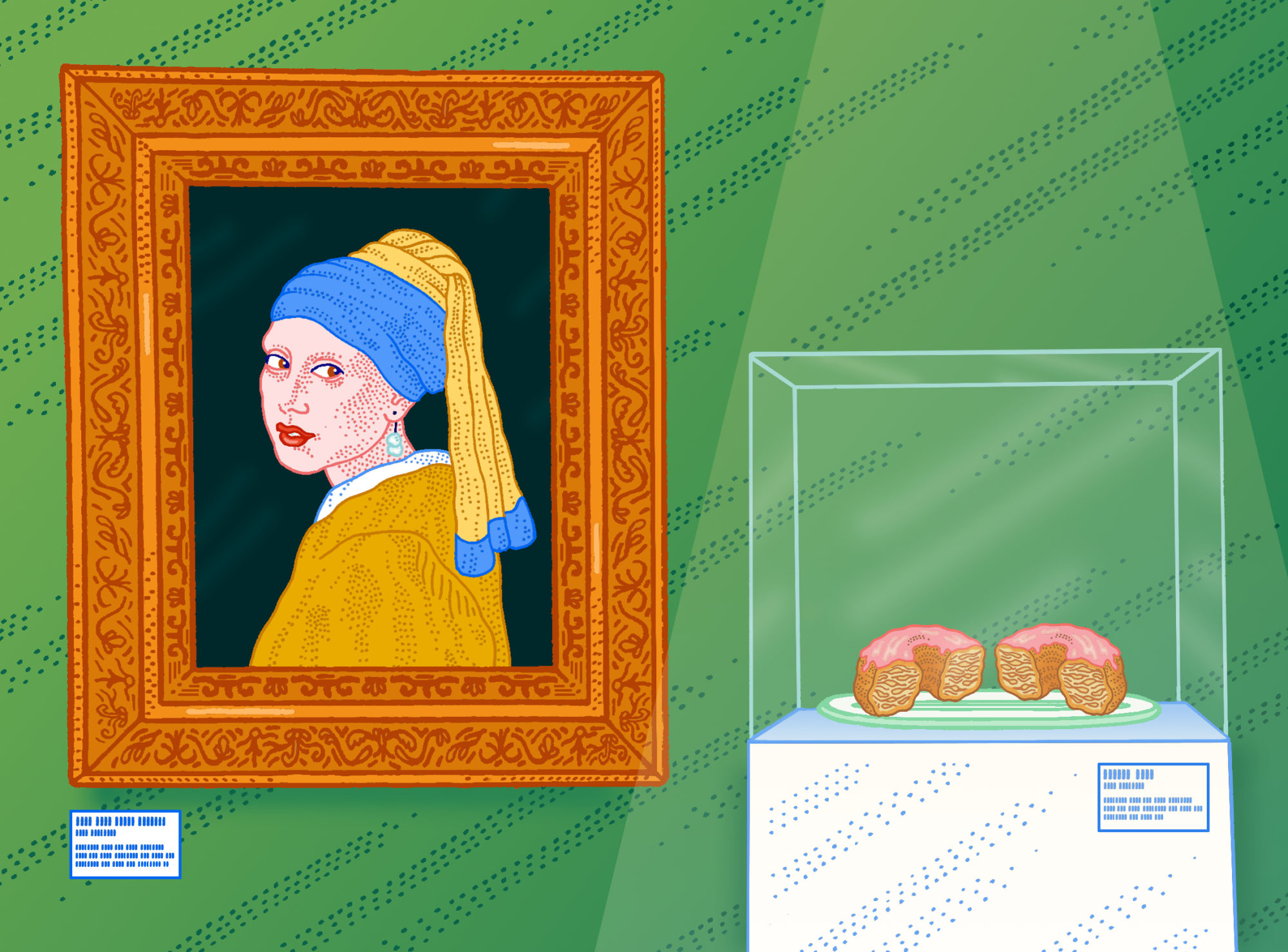 A Ghirlandaio painting and an Eric Ripert entrée are closer cousins than you might think.

I come to the question of “Is it art?” honestly: I’m an art history professor who occasionally writes about food. In asking whether great chefs are artists in the traditional sense of the word, I use the criteria that Aristotle set out around 300 B.C. One must pose three questions about each work of art: Is it good—does it achieve what its maker set out to do? Is it beautiful—in the case of food, does it provide aesthetic, olfactory, and gustatory pleasure? Is it interesting—does it break boundaries, make us think, or shake our heads in admiration?

The 16th-century artist Giorgio Vasari, who is widely considered the godfather of art history, wrote in his 1550 book, The Lives of the Most Eminent Painters, Sculptors and Architects, that great art should comprise invenzione (the concept of a work, before it is made) and disegno (the physical ability to manifest that concept). Legions of kitchen assistants and sous chefs have got the disegno chops, or the physical ability to cook food properly, down pat. But only a handful also have the invenzione to rethink how food can be cooked, served, and consumed. Invenzione is what separates the chefs from the cooks. Or, if you prefer, the Chefs from the chefs.

Whether chefs should be considered artists seems to be a hot question, particularly among chefs themselves. “I think chefs are both artists and artisans,” Charlie Palmer says. “However chefs want to perceive themselves, that is totally up to the individuality of the chef.” Ferran Adrià, who has been described as an artist more than any other chef, does not think of himself as one. “I consider myself strictly a cook,” he says. “That does not take away the fact that there are elements in the production of certain chefs that trigger aesthetic emotions similar to those triggered by certain works of art.” Bill Buford, the author of Heat, concurs. “I think most chefs are artisans, and that’s a perfectly respectable title,” he says. “But within the context of an artisan profession, there are people who are able to come up with such imaginative and creative leaps that it’s hard not to regard it as an artistic achievement.”

“Of course, I’m biased, and I believe we are artists,” Eric Ripert says. “To me it’s obvious that [cooking] is two things, craftsmanship and artistry. Craftsmanship, in that a lot of people in kitchens are mastering techniques to cook something to enrich the body. You go to bistros and it’s basically copying recipes from a certain tradition or ethnicity.” Mechanically reproducing recipes well and consistently is all that most diners require. Cooking is largely a repetitive series of movements, following formulas we call recipes, and it can be taught at schools or through restaurant training. How to fillet sea bream, perfectly cook a steak, boil al dente pasta—these are attributes of disegno.

But it’s invenzione that distinguishes a great chef from a good cooks. “You have some chefs who are artists and have a vision, and those chefs are creative,” Ripert says. “They’re creative by inventing new techniques, by using new ingredients in new ways, by creating new flavors and consistencies, and so on.”

So let’s leave aside the good cooks and consider the great chefs. Are they up there with the great artists? Can Heston Blumenthal’s Dinner stand alongside Leonardo’s Last Supper, or Thomas Keller’s Oysters and Pearls beside Vermeer’s Girl With a Pearl Earring? And is David Gelb a modern-day Giorgio Vasari, filming, rather than writing, a sort of group biography of the greatest chef-artists of our age?

To begin to answer the question, consider that chefs and the way they work have much in common with Renaissance artists. They are the heads of a kitchen, and their work is rarely theirs alone. They design the dishes, teach their staff how to make them, supervise the preparation, and add finishing touches. There might be a dozen hands involved in a dish’s preparation, but when it’s served, the head chef gets credit for it—even if she or he isn’t in the kitchen that evening.

This arrangement has a direct parallel to the Renaissance bodega, the studio system that has dominated fine art since ancient times. “If you look at Michelangelo, obviously he was on his own,” Ripert notes. “However, he didn’t do the Sistine Chapel by himself. He had a team of students with him, and he learned painting from Ghirlandaio. It was a tradition of artists having students, to be able to do all those projects. In a kitchen, as you can imagine, by yourself, you cannot do much. So you need an organization in place, people who have been mentored by you, who can duplicate what you need to do, who can help you.”

For another parallel, consider how one becomes a Chef with a capital C. The best work their way to the top, starting as assistants, then set out on their own, opening their own restaurant. Just like Ghirlandaio’s studio produced a young Michelangelo, for example, Gordon Ramsay’s kitchen produced Angela Hartnett.

Other Chefs work for someone whose level they quickly surpass: Massimo Bottura toiled in restaurants of no particular renown before becoming the world’s best chef (if you subscribe to the World’s 50 Best list at least), much like Caravaggio, who started his brilliant career laboring for the so-so Mannerist painter Cavaliere d’Arpino.  Then there are self-taught outliers, like Ana Roš of Hiša Franko in Slovenia, who recall artistic geniuses like Francis Bacon. And of course, there is the wild streak possessed by many professionally creative people: While I was watching Chef’s Table, it struck me that the much-tattooed Alex Atala, a former punk rocker who feels most at home in the jungles of his native Brazil, might find a kindred spirit in Baroque painter Salvator Rosa, who enjoyed hanging out with bandits in the wilds of the Italian countryside.

But let’s put aside the artists—and chefs—for a second. The baseline for traditional art, as Vasari established, is that it is beautiful. The baseline for a dish is that it tastes good. As Observer food critic Jay Rayner notes, “The theorizing is fine, and god knows the work and devising the dishes and refining and refining can be very tedious. So I don’t blame [chefs] for attaching that kind of intellectual quality to it. But if it doesn’t taste nice, it’s useless.”

So you could argue that the question is better left to critics to answer. For his part, Rayner wonders if a key component is missing for a plate to be considered art. “I suppose we can argue over what the definition of art is,” he says, “but certainly just because it looks pretty good, and requires a lot of work, does not make it reflect upon the human experience.”

It bears saying that not all chefs think the term “art” should be in the equation. “Food is nourishment to me, not art,” says Cindy Pawlcyn, chef-owner of Napa Valley restaurants Mustards and Cindy’s Backstreet Kitchen. “There is food that has gone too far to the ‘artistic’ side, that is too weird for me to be food.”

“Is David Gelb a modern-day Giorgio Vasari, filming, rather than writing, a sort of group biography of the greatest chef-artists of our age?”

Art, the saying goes, is great when it makes you think about some aspect of what it is to be human in a different or deeper way. We are moved by Michelangelo’s Pieta, for example, because we can empathize with a parent mourning the death of a child. Can food actually do anything of that nature? Bettina Jacomini, editor-in-chief of Fine Dining Lovers magazine, thinks so. “Great chefs serve emotions, and when it happens, it’s such an intimate experience,” Jacomini says. “They sublimate matter into feelings: Is that not art?” Perhaps, but this argument doesn’t convince Rayner. “I have not come across a chef whose cooking actually makes me dwell upon the meaning of who I am,” he says.

There is also the question of how information travels, spreading the glory of chefs and their signature dishes. For those of us who haven’t dined at Alinea or didn’t make it to El Bulli, we can only admire the food from a distance, imagining what it must taste like. Instagram, however, has changed this somewhat: Insta-friendly plates, ideally photographed from directly above, have become such a phenomenon that critics comment on the ones that appear either too photogenic or refreshingly unkempt. The upshot is that the slick photographs that travel social media encourage foodies to embark on pilgrimages to try the real versions of these digitally reproduced dishes. It’s not unlike the fame of Raphael, who was renowned around Europe thanks to prints of his paintings that traveled to those who had never been to Italy to see his work in person.

For his part, Chef’s Table creator Gelb offers another comparison: To him, the kind of meals featured in his show are closer to performance art than anything else. “They have to do it over and over, each time from scratch,” he says of chefs and the small armies that attend them. “So for me, it’s almost like a performance art.”

This seems the closest parallel. Performance art is experienced just once by its audience, who preserve it through writing, spoken recollections, photographs, and film—the same tools available to those who have experienced, say, a meal at El Bulli. You can buy a cookbook and try to reproduce a dish, but it will be both extremely difficult and, by definition, a copy, not the original.

But the most important question, the one that divides the Chefs from the few Super Chefs who have actually changed the way people eat, may be this: Which Chefs, if any, will be taught centuries hence, heading their own textbook chapters like Giotto, Michelangelo, and Caravaggio do in art history tomes?

If the history of art is our guide, then only time will tell. Or at least that’s what Adrià thinks. “The current rise of gastronomy should not make us forget that time is the only judge of transcendence of all creations of human beings, including, obviously, cooking,” he says.

Who are the canonical Chefs whom time has already enshrined? Marie-Antoine Careme established French grande cuisine and was the first internationally celebrated chef. Michel Richard helped popularize nouvelle cuisine. Alice Waters did the same for farm-to-table eating. Adrià appears to be another, as does Rene Redzepi.

Perhaps some clues can be found at Corey Lee’s San Francisco restaurant In Situ, where the menu consists of well-executed copies of famous dishes invented by other chefs. Each is carefully cited, such as “Wood Sorrel & Sheep’s Milk Yogurt, Rene Redzepi; Noma; Copenagen; 2005.” The restaurant is equal parts edible museum, homage, and greatest-hits mixtape.

The answer to the question of whether the greatest Chefs are artists may be a yes—but performance artists who combine disegno and invenzione and run their kitchens like Renaissance bodegas, delegating to their team of skilled artisans (and perhaps a future Chef/artist in waiting). Ana Roš, the 2017 Best Female Chef in the World, may have put it best: “We are artists. And we are craftsmen,” she says. “We do use our creativity and our hands. The success of a chef is when his hands can follow his mind. We think art and do craft.”

Noah Charney is a professor of art history and the best-selling author of Collector of Lives: Giorgio Vasari and the Invention of Art and The Museum of Lost Art.